This year's family holiday was in Alora, about 50 kilometres north west of Malaga. I had reasonably high expectations, thinking that there may be more butterflies in the hills rather than the more built-up coast. However, Spain has experienced a hot, dry spring and a fairly normal, hot, dry summer and then was in the midst of a heat wave while we were there. Daytime temperatures were up to 40 degrees Celsius in the shade and we certainly noticed how parched the country looked as we flew over northern Spain.
Our rented villa was a couple of kilometres outside the village and offered a lot of opportunities for walking. Much of the surrounding country was used for growing olives and the earth under the trees had been rotivated. Other areas were dry scrub, with rosemary, thyme and lavender plants. It was so dry that these herbs didn't produce any smell when they were walked on!
In the bottom of the valley were well irrigated orange and lemon groves and the river Guadalhorce still had water running in it despite the dams upstream and the amount of water being taken out of it for irrigation. 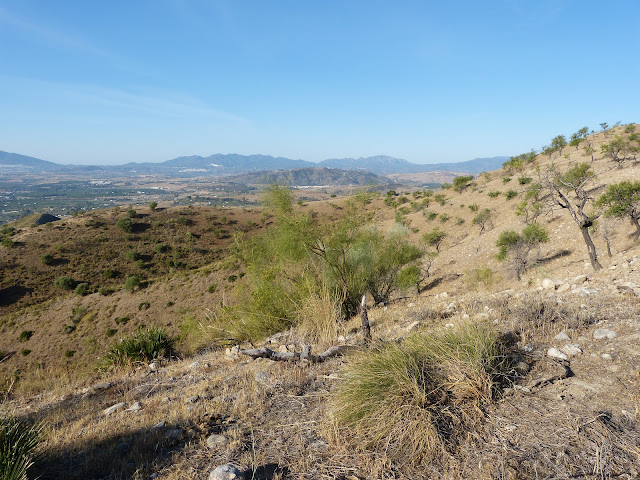 Our villa was set in a lovely garden, but most of the plants were palms and other drought tolerant species. Not ideal for attracting butterflies. There were a few lantana and a plumbago that proved irresistible to some regular visitors.
As is so often the case, the first butterfly I saw this holiday was a Geranium Bronze, Cacyreus marshalli. There were quite a few geraniums in the garden, but they were very dry and woody and I couldn't find any evidence of caterpillars on them. 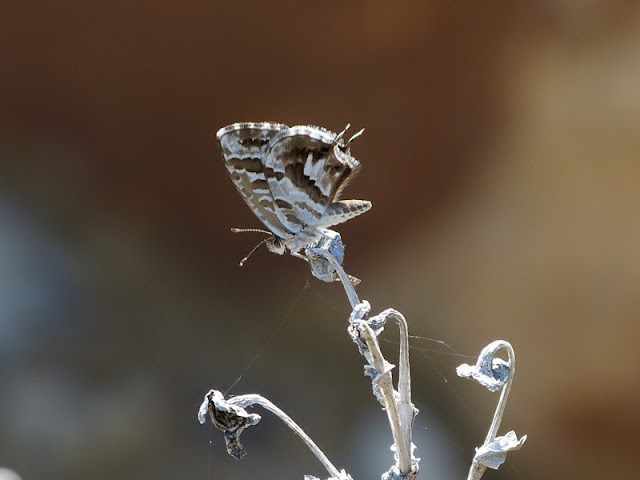 This lovely little Southern Brown Argus, Aricia cramera, was in the garden on the day we arrived, but I didn't see any more in the garden after that. There were others in the hills around the villa and by the river, though. 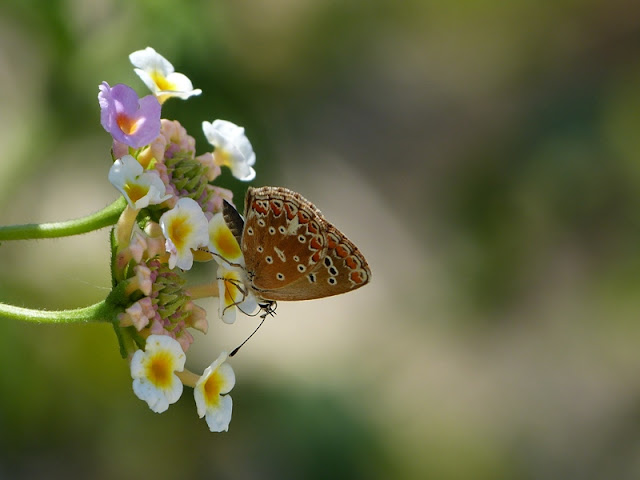 Lang's Short-tailed Blues, Leptotes pirithous, were the most numerous butterfly in the garden. They were mostly found around a plumbago plant, where I saw them laying eggs. 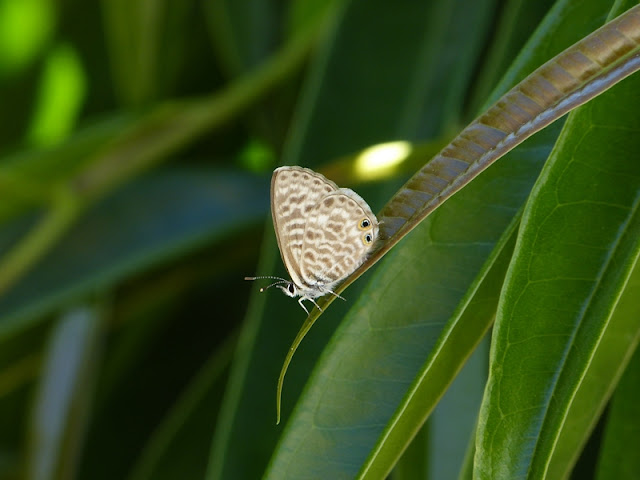 I took this picture of an egg, and only when I viewed it on the camera screen did I notice that there was also a caterpillar on the plant. I couldn't actually see it with the naked eye - it measured about two millimetres long. My daughter and I spent ages searching the flower heads on the plumbago looking for larger caterpillars, without any success. 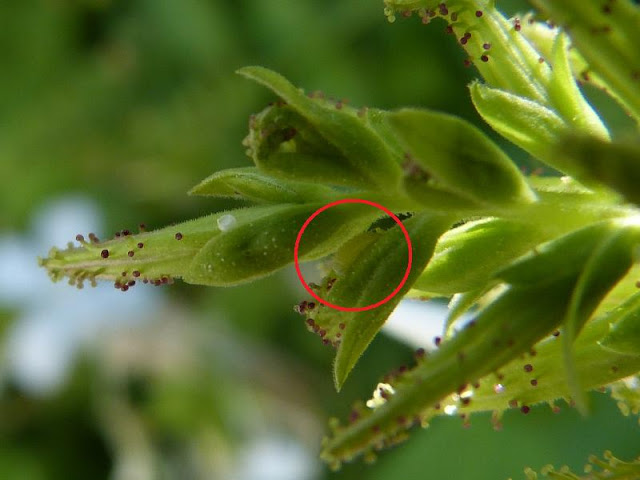 The best area I could find for butterflies close to the villa was along a short length of track that had been cut into the hillside. This seemed to offer a bit of shade to the plants and the thyme was in flower there. This seemed to be one of the few food sources in the area for butterflies.
I was very excited when I saw several small blue butterflies there, but they all turned out to be Common Blues, Polyommatus icarus. They were very much smaller than those back home. I don't know if that was because the food plants were so shriveled up. 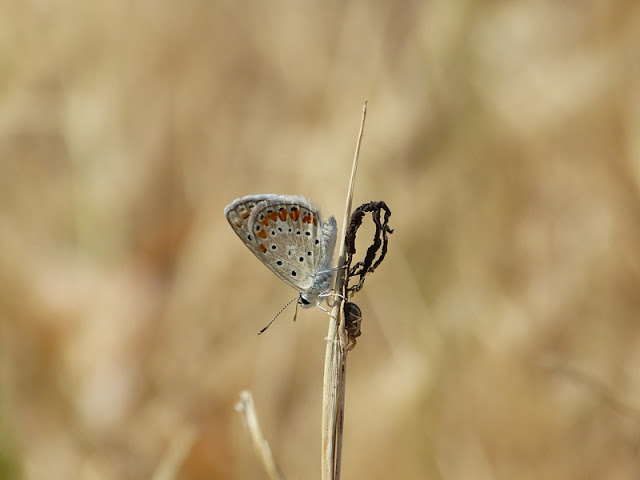 The most common butterfly in that area was the Southern Gatekeeper, Pyronia cecilia. 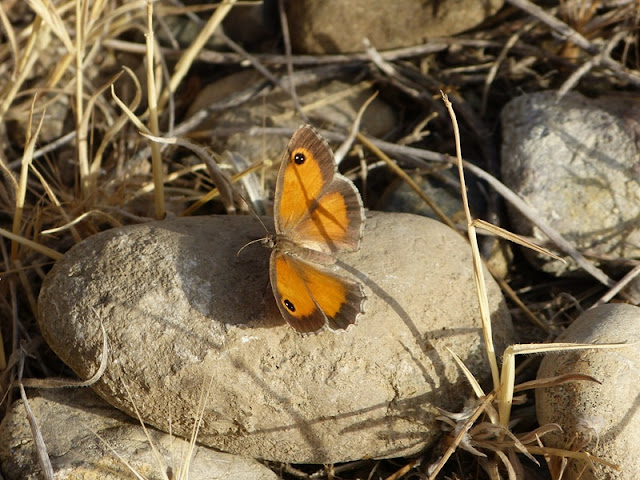 They spent much of the day hiding away in shady areas and were remarkably well camouflaged when they closed up their wings. One day I scrambled along a dried up stream bed and I was amazed at the number of Southern Gatekeepers that flew up ahead of me. There were constantly about five to ten of them in the air, flying up when I disturbed them and then landing in another shady area. 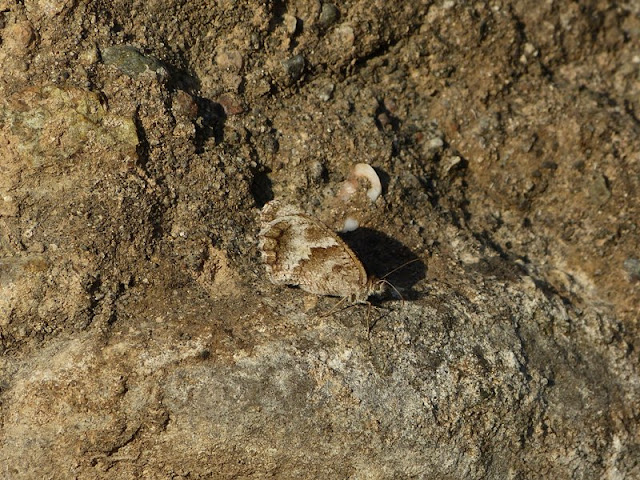 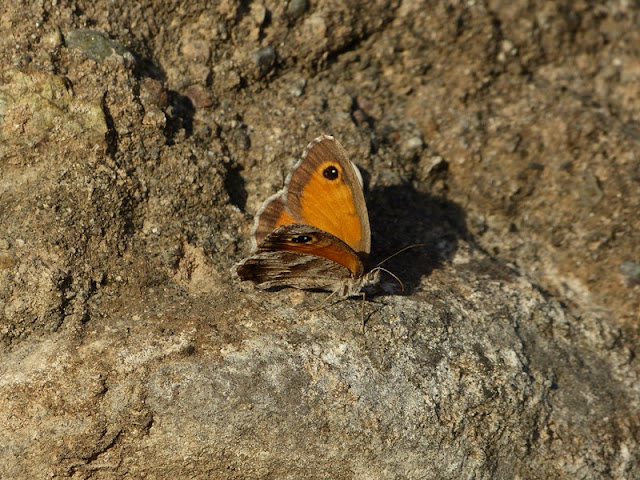 It was interesting that out of the several hundred Southern Gatekeepers I saw, I only noticed two males. They could be recognised by the dark sex brand on their upper wings. Maybe there were more males around, but they were less inclined to open their wings, or maybe the males emerge later than the females. 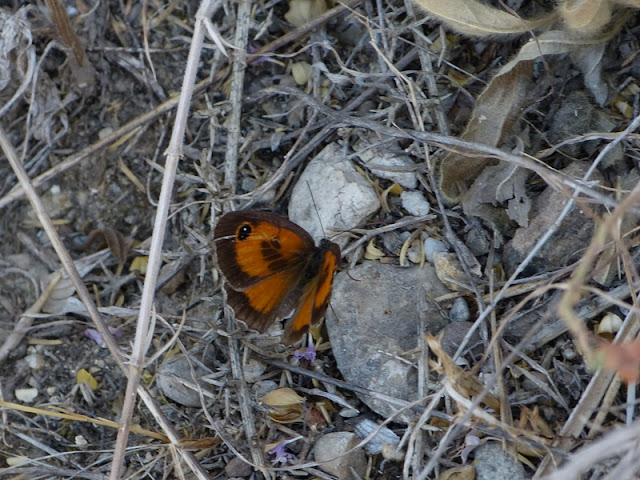 The other butterfly that was almost as common was the Dusky Heath, Coenonympha dorus. I love the markings on the underside of the wings, particularly the silver edging. They would briefly open their wings on landing, but spent most of their time with their wings firmly shut. 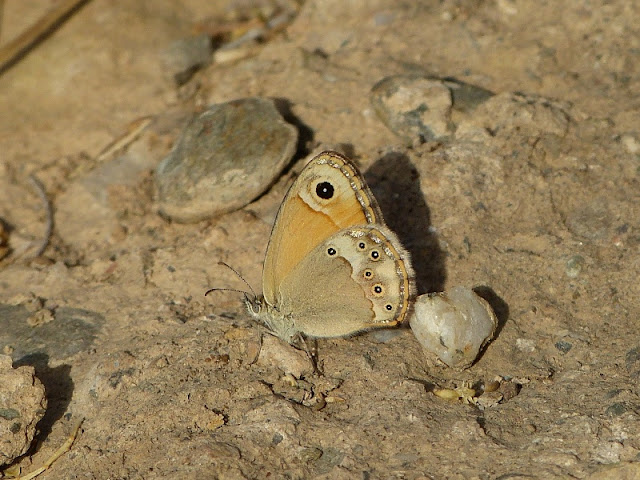 I'll continue with the other butterflies I saw in a separate post.
Posted by Nick Morgan at 23:06