On April 27th I was walking my butterfly transect along the River Tyne in Haddington. It was quite a disappointing walk, with very few butterflies around. All I recorded was one Peacock, Aglais io, one Small Tortoiseshell, Aglais urticae, and four Orange Tips, Anthocharis cardamines. One of the Orange Tips appeared to be damaged as it was flying strangely and appeared to be missing the top of one of its wings.

On my way back I saw the same Orange Tip land in front of me and realised that it wasn't damaged after all. It turned out to be a Gynandromorph - half male and half female, divided exactly down the middle. Its left hand wings were marked as a male, with an orange tip and the right hand wings were marked like a female. I noticed that the wings were slightly different shapes and the antennae were different lengths. 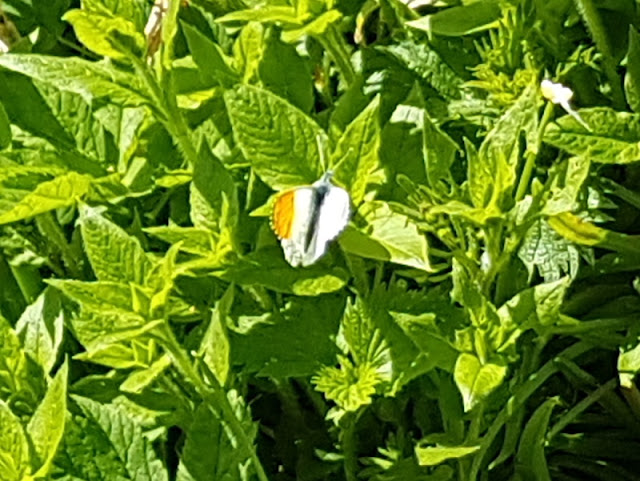 Unfortunately, that day I had my new phone with me. I tried to take some pictures, but it took me a while to do so and all I could manage were these two fuzzy pictures. Prior to this, it was posing beautifully with its wings open! 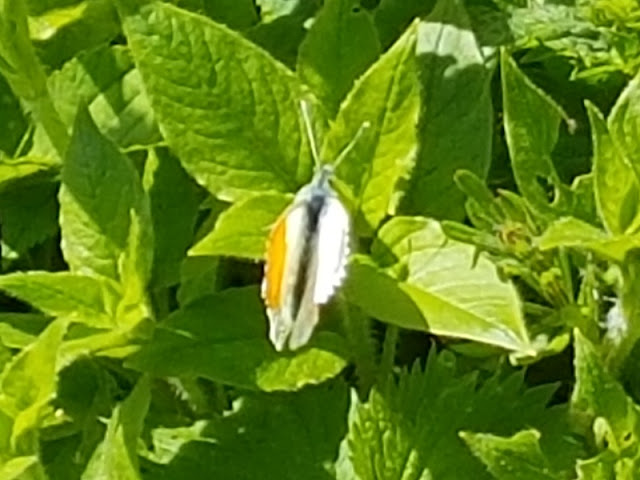 I then met two dog walkers who I regularly see. They often ask me how my transect is going and I couldn't contain my excitement that day. I explained about the half and half butterfly I had seen and they both showed an interest. I returned over the next five or six days with my camera hoping to see the butterfly again, but sadly I didn't see it.

However, I learned that one of the dog walkers had seen it 300 metres further downstream two days later and the other lady had seen it on a tributary about 500 metres upstream the following Sunday. Although it was sad not to have managed to get a better picture of the butterfly, I was pleased that two other people had also managed to witness this curiosity.

Following on from my posts about caterpillars that I had observed through to being butterflies last year, here is the story of some Orange Tips from this year.

Last July I was working on an old railway that is now a walkway and cycle path. I noticed a number of dried up Garlic Mustard seed heads along the edge of the path. I checked the seed heads and managed to spot two Orange Tip chrysalises.

The chrysalises are beautifully camouflaged and look just like a thorn, or part of the seed head. 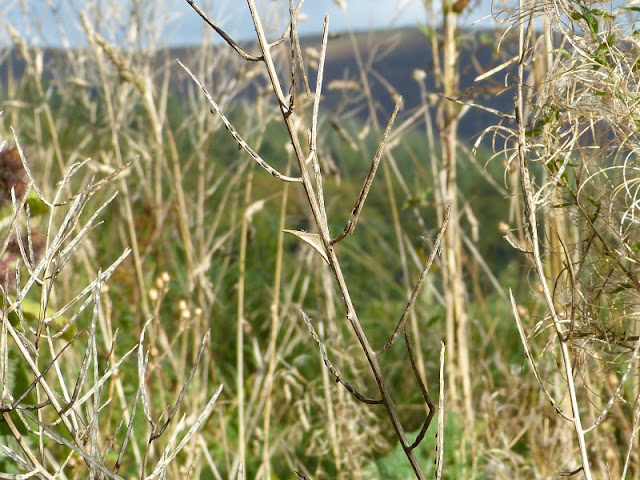 I realised later that the plants along the edge of the path are cut back each year, so the next time I was there I found three chrysalises on the plants which would have been cut and took them away with me.

The seed heads with the chrysalises attached lived in my garage over the winter, next to the window. 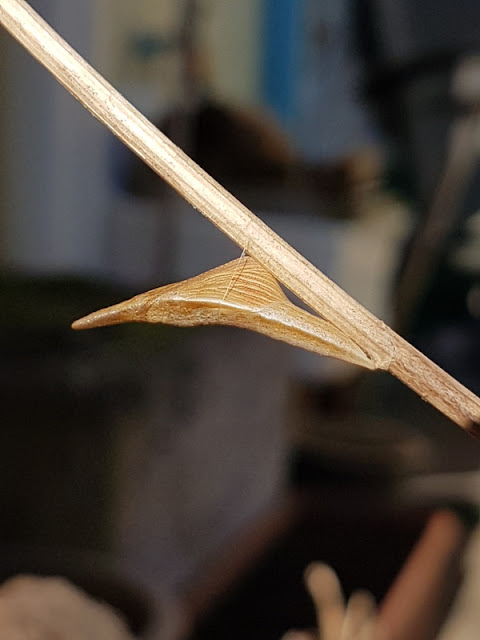 Every couple of weeks I would spray them with water to stop them drying out. I wasn't sure if this was necessary, but my reasoning was that if they were outside they would have been rained on, so I thought it was necessary.

Towards the end of April, I noticed that one of the chrysalises had started to change colour, showing the wing pattern of the butterfly. The other two chrysalises also changed shortly afterwards, revealing that they were all going to be boys! 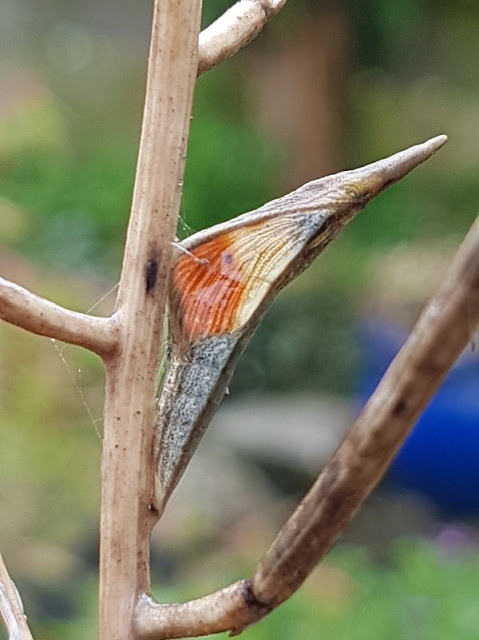 On 29th April the first butterfly emerged, over nine months since I collected the chrysalis. The next butterfly emerged on 30th April and the third one emerged on 1st May. Although, yet again, I didn't see the butterflies emerge, two of them were waiting for me when I arrived home from work. The top of the container was left unzipped for them, but they appeared to be quite happy just sitting on the side of it. 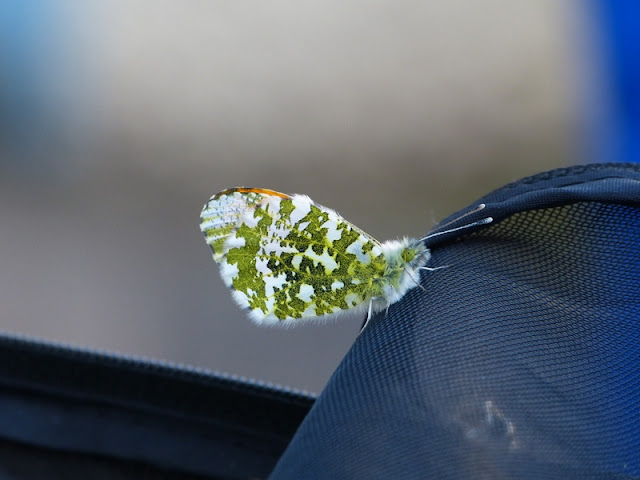 It was good to know that I had helped three butterflies to survive, that would otherwise have been mashed up by a mower! 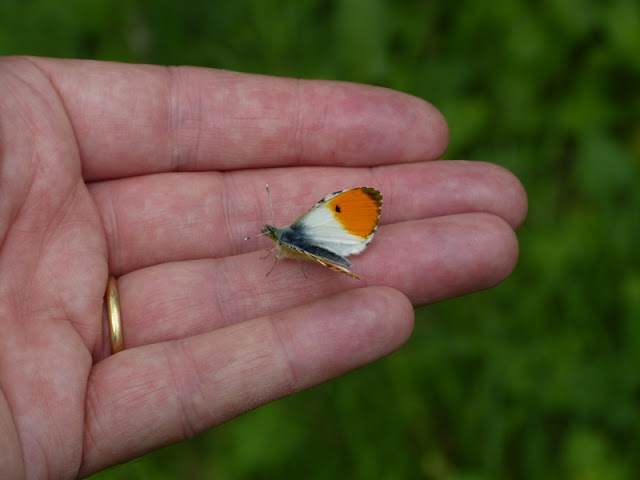 I planted a Garlic Mustard plant in a pot in the garden this year and I was delighted to see an egg on it on 19th May. I can't say when it was laid, but it was orange meaning that it was at least a day old.

On the 1st June I noticed a small caterpillar on the plant, which had probably hatched the previous day and today when I was searching for it, I noticed that there are two caterpillars on the plant, each on different flower stems. 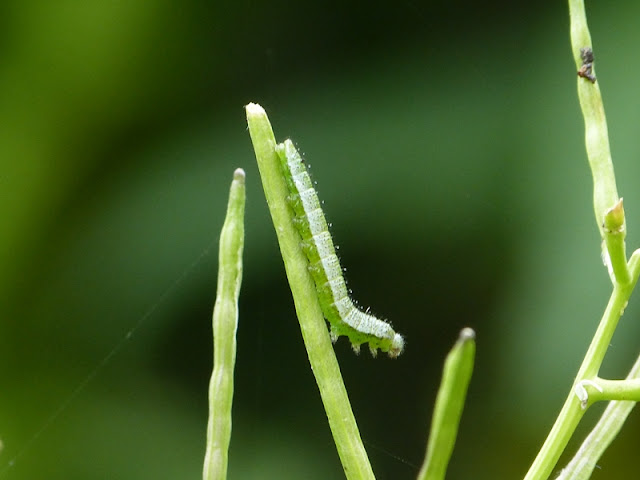 And so the cycle continues!!