I walked a little further down the dry stream bed to where it opened out into a rocky area. There were several fritillaries flying around fighting over this prized territory. It was so nice having time to observe them and take pictures of the upper and underside of the wings. I realised that they usually returned to the same spot after a bout of aerial combat, so I was able to wait for them to return for a photograph! 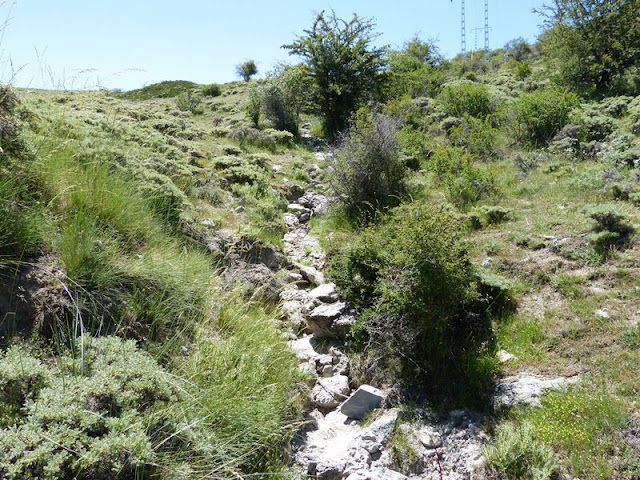 There were at least two Knapweed Fritillaries, Melitaea phoebe. 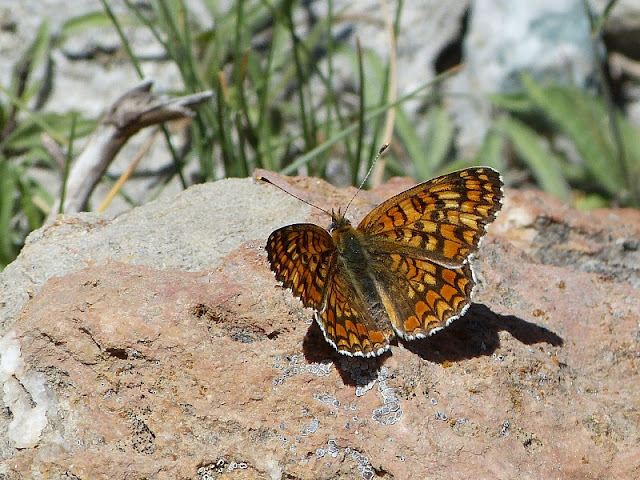 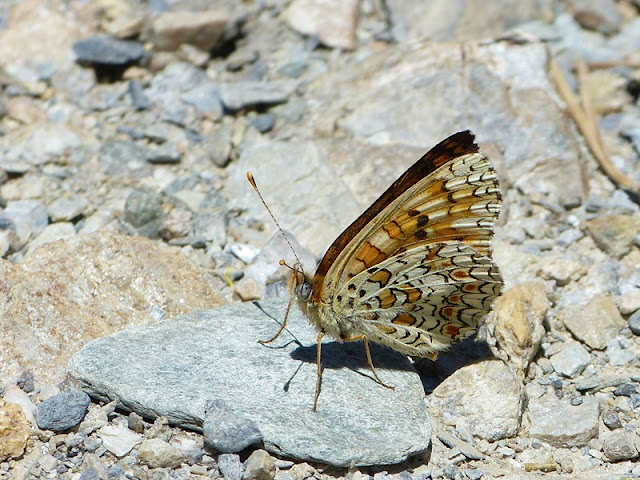 They seemed to be continually chasing off some Niobe Fritillaries, Argynnis niobe altonevadensis. 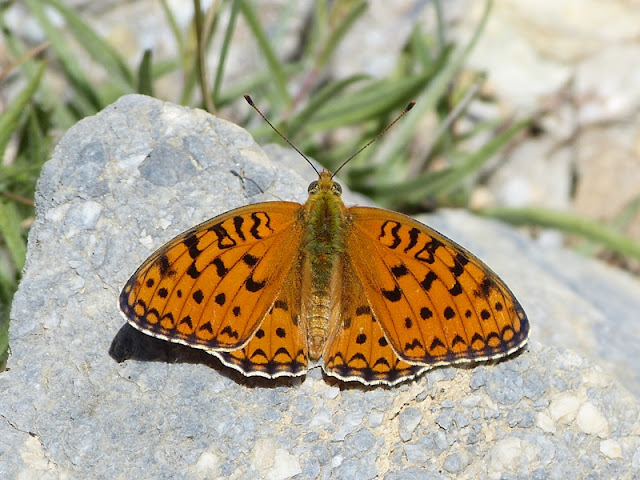 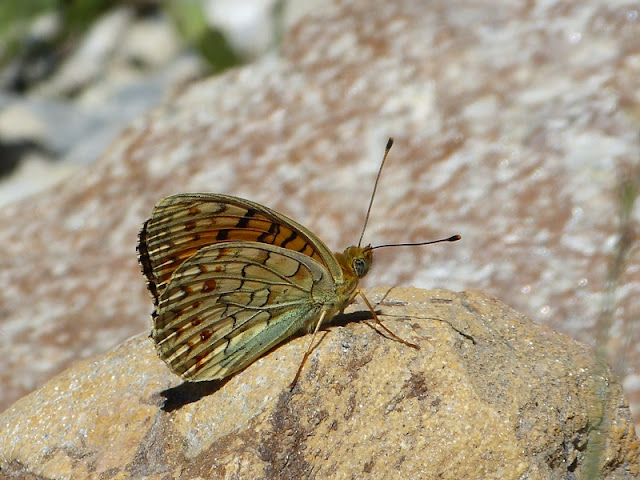 A Spotted Fritillary, Melitaea didyma, seemed to be at the bottom of the pecking order and was quickly seen off. 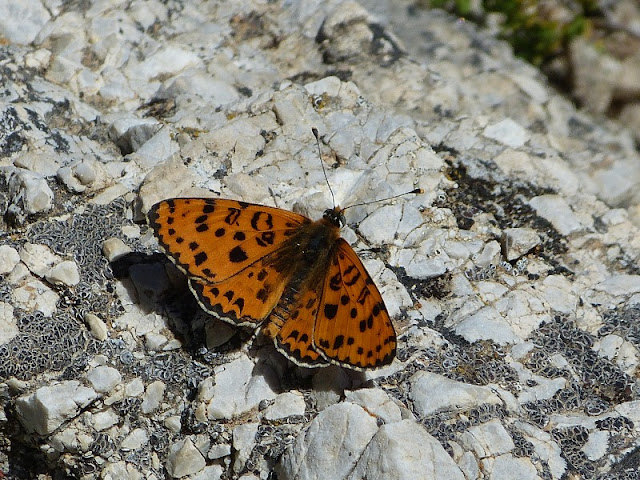 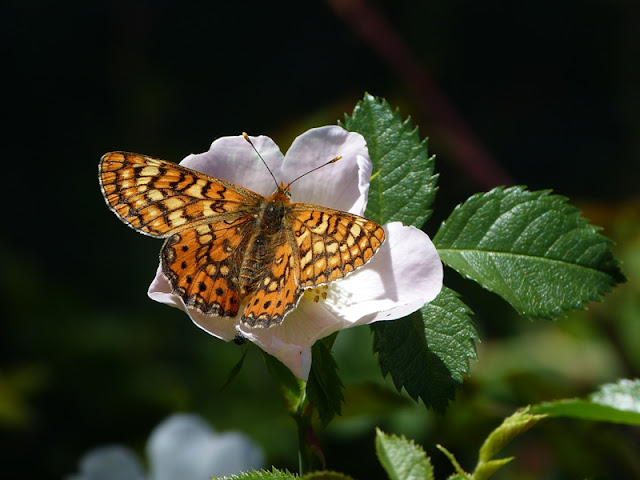 Occasionally a larger Fritillary would fly past, but it would soon be chased off before it had even landed. I suspect they were High Brown Fritillaries, Argynnis adippe, as that is the largest fritillary occurring in the Sierra Nevada.

There were also a few Queen of Spain Fritillaries, Issoria lathonia. They seemed to be the top dogs in the area. 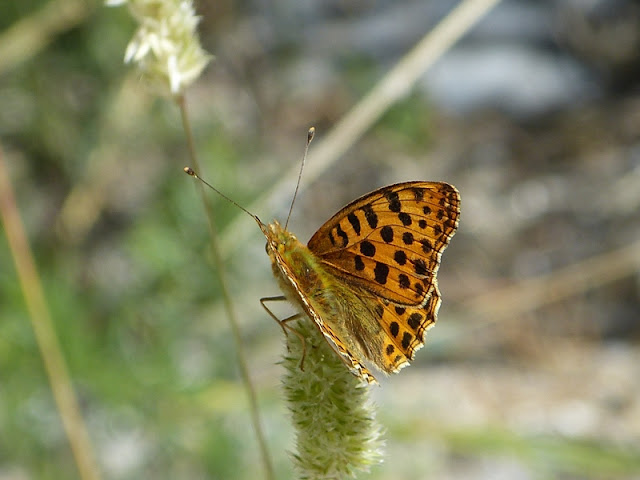 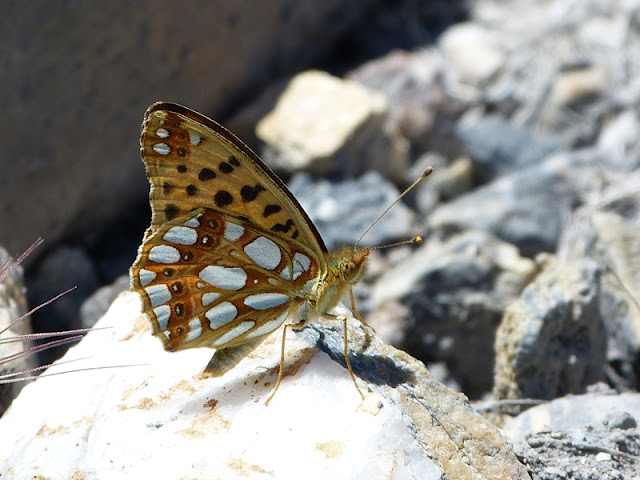 I returned to the car to have a drink of water and while I was there I noticed two fritillaries on a yellow flower below me. I cautiously approached them and saw that they were Cardinal Fritillaries, Argynnis pandora. 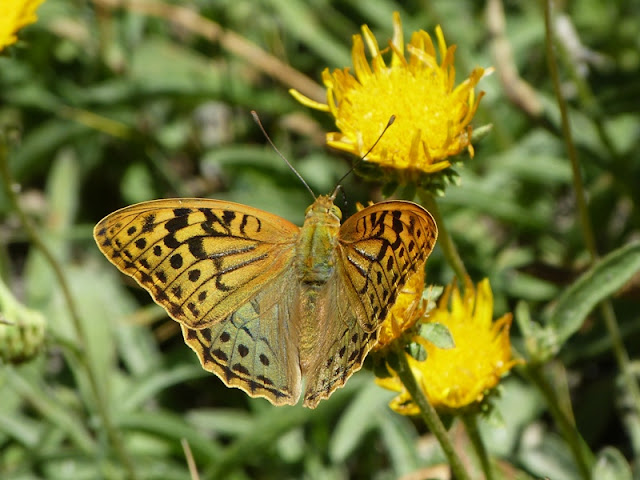 Despite a disappointing start to my day, I ended up seeing 33 species. It was so nice being able to spend some time watching the butterflies in this little meadow.

We have visited the same holiday villa north west of Malaga every second year since 2012 and more by chance than design I have driven the three hour trip to the Sierra Nevada on the 4th of July each time. It has been interesting to see the differences in butterflies each time.

This year I drove straight up to the Hoya de la Mora ski resort, arriving just before 9 o'clock, with the intention of heading straight up to look for Zullich's Blues, Agriades zullichii. However, as soon as I stepped out of the car I discovered that it was really windy up there. 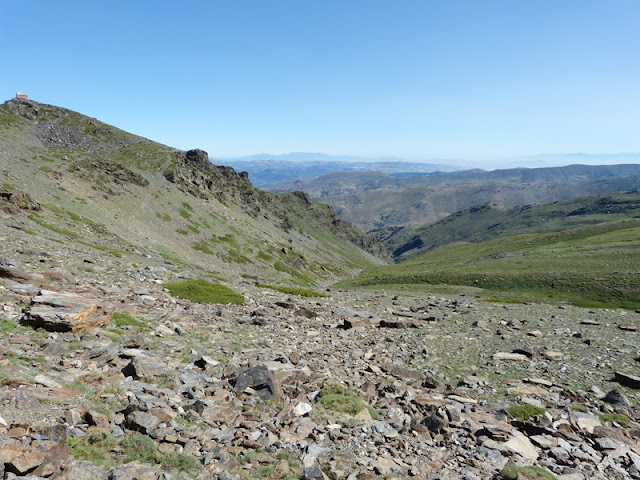 Having driven so far, I thought that I may as well walk up the mountain to have a look anyway, hoping that the wind may die down. However, I didn't see any butterflies at all.

I then decided to walk down to the stream that I have visited in the past thinking that it would be more sheltered there. However, the wind seemed to be blowing straight down the valley, so all I saw all morning were two Common Blues, a Painted Lady, two Clouded Yellows and a Small Tortoiseshell, all sheltering from the wind. 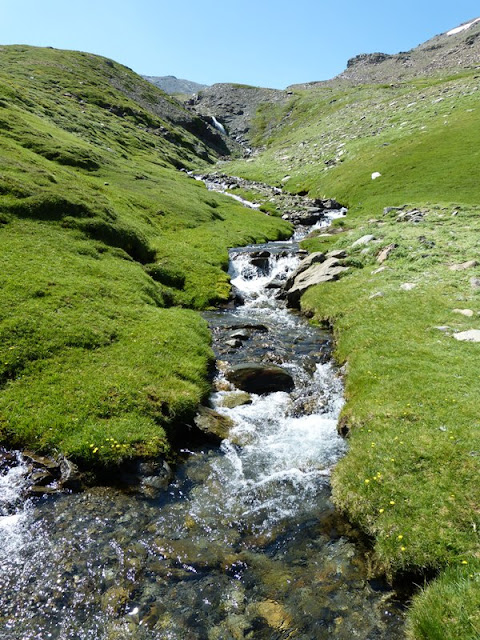 Rather disheartened, I gave up and headed back to the car. I drove back down the mountain and thought that I may as well have a look in a little meadow where I have seen a lot of butterflies in the past. Normally, I only spend a few minutes here having spent most of my time in the high mountains, but this year I had about two and a half hours wondering around an area no bigger than a football pitch. Luckily this area was completely sheltered and I was able to see hundreds of butterflies. 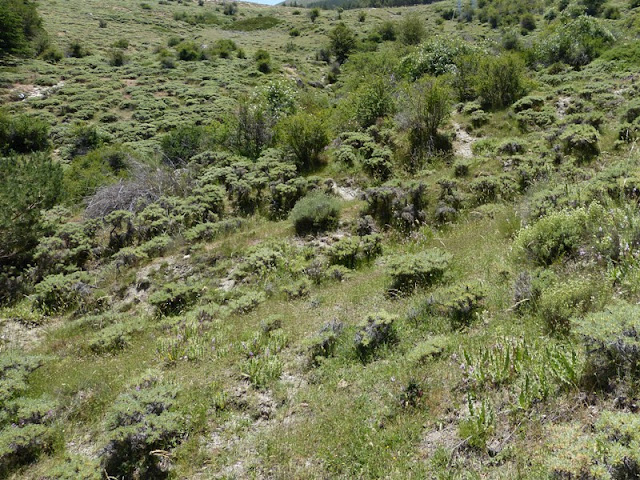 The grassy area of the meadow had all sorts of small butterflies, such as Common Blues. Both Polyommatus icarus and Polyommatus celina occur in Sierra Nevada... 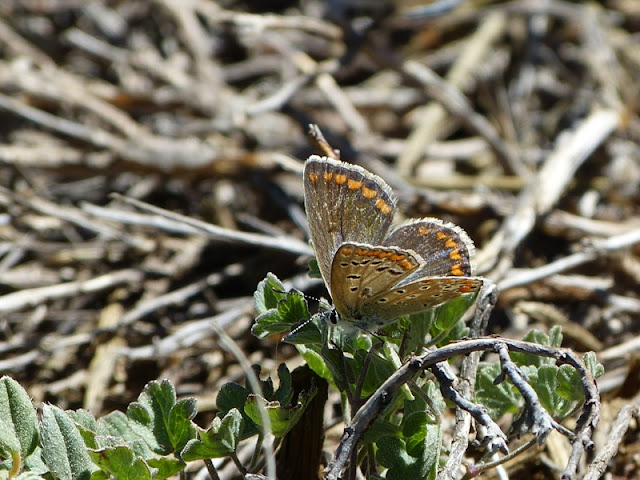 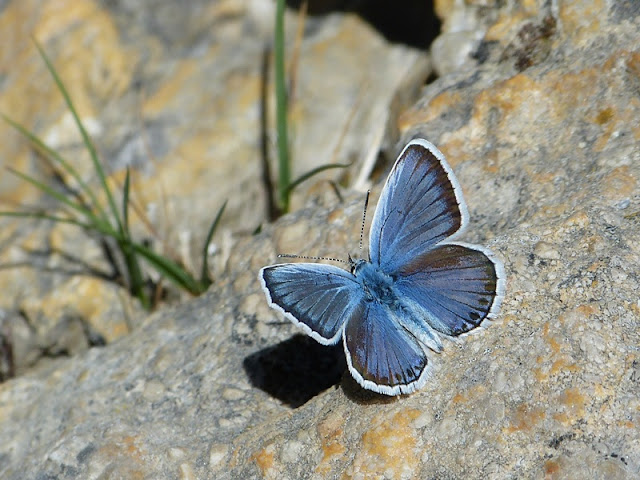 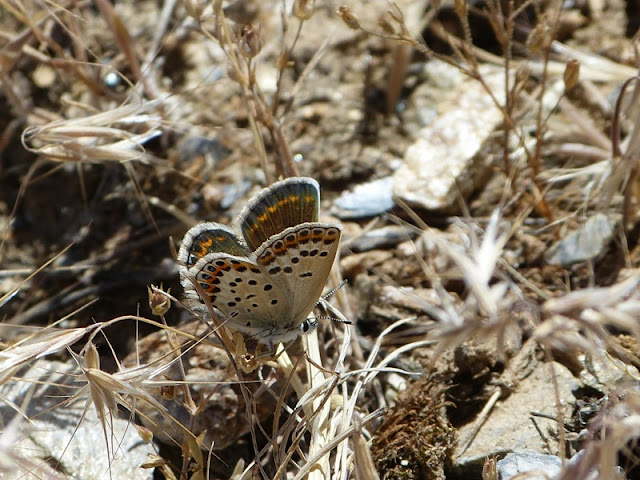 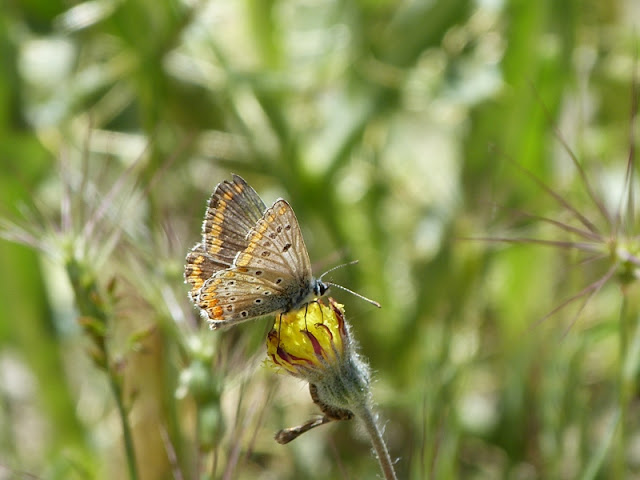 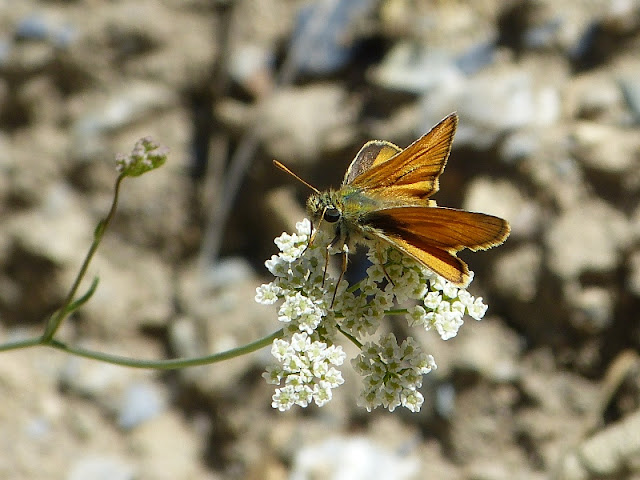 On previous visits I have seen the almost identical Essex Skipper, Thymelicus lineola hemmingi. I think this is one that I saw this year.

In amongst the shrubs were various white butterflies, most of which wouldn't stop for a picture this year. There were Large Whites, Pieris brassicae, Iberian Marbled Whites, Melanargia lachesis, Black-veined Whites, Aporia crataegi, Cleopatras, Gonepteryx cleopatra mauretanica, and Small Whites, Pieris rapae. 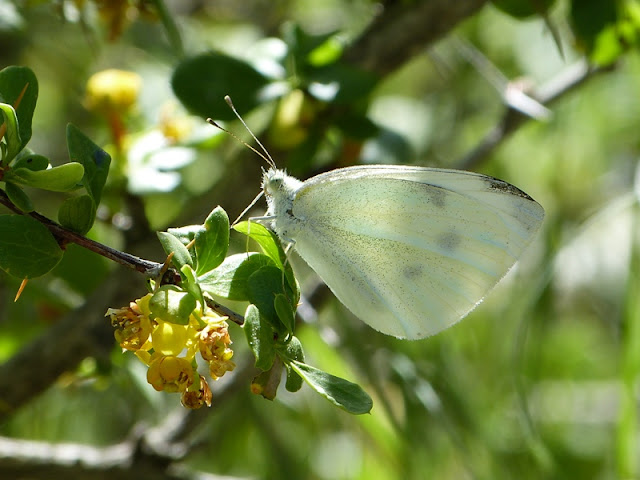 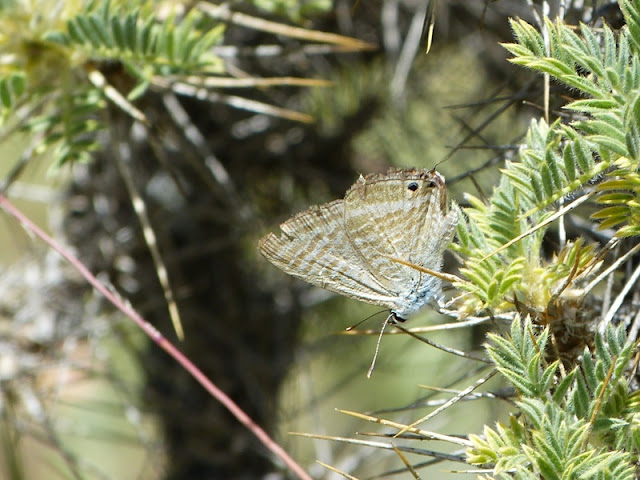 And only one Small Copper, Lycaena phlaeas lusitanicus. I am always surprised that they aren't seen in greater numbers in the Sierra Nevada. 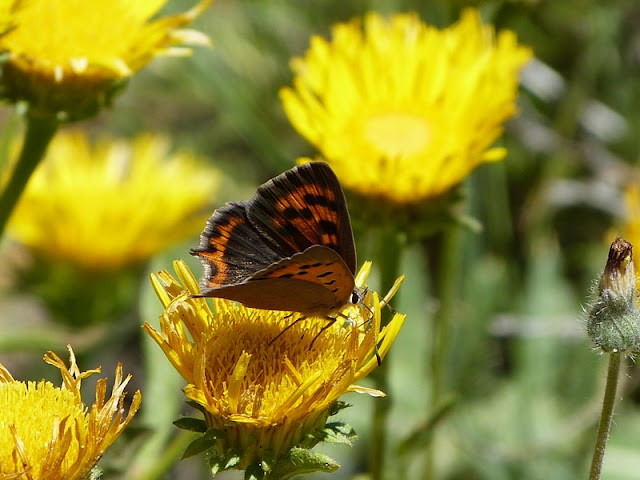 There were also Oriental Meadow Browns, Hyponephele lupinnus, Wall Browns, Lasiommata megera, and Rock Graylings, Hipparchia alcyone enjoying a bit of shade. I was delighted to see a Spanish Gatekeeper, Pyronia bathseba. It was very difficult to approach, but I did manage a couple of distant pictures. 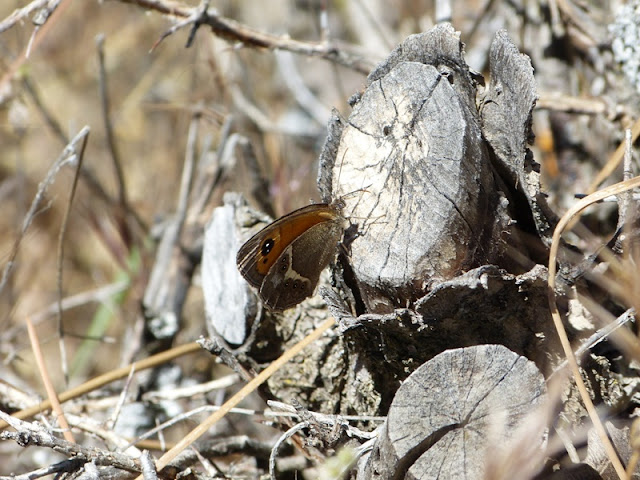 While I was stalking it, I saw a Nettle Tree Butterfly, Libythea celtis, the first time I have managed to see this species. Sadly it flew off before I could take its picture.

But I did manage to get a picture of this Bath White, Pontia daplidice. 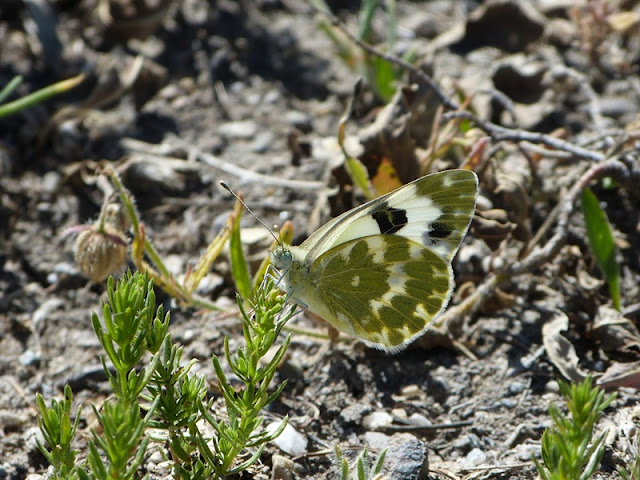 There were a few Dusky Heaths, Coenonympha dorus. 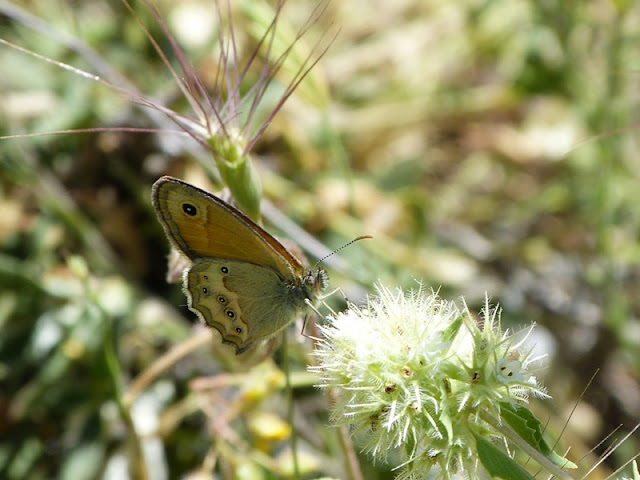 In the more open spaces Clouded Yellows, Colias crocea, regularly flew past. Most were the regular yellow colour, but there were one or two of the pale helice form. 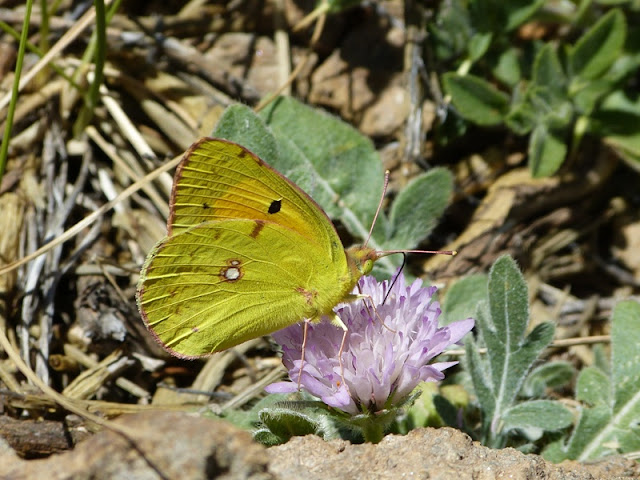 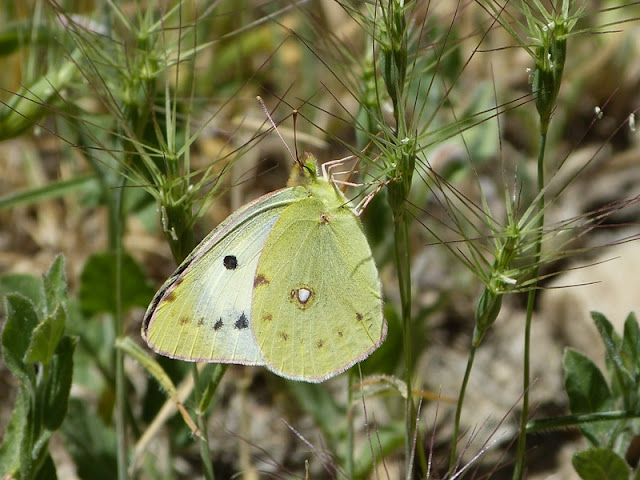 There were a few damp areas in an otherwise dry stream bed, which were attracting butterflies. Here are three Silver-studded Blues and an Idas Blue. 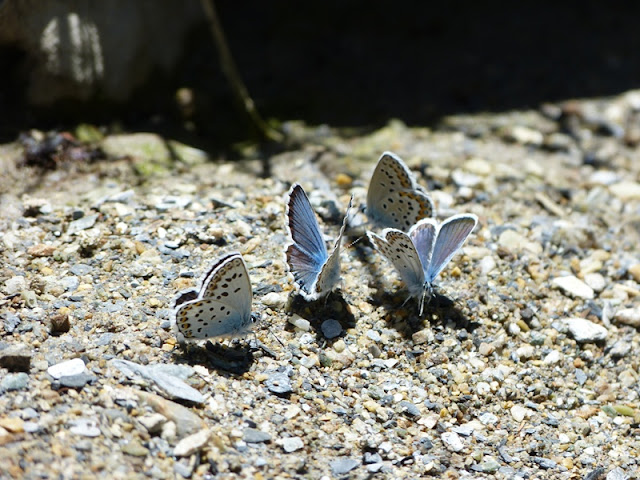 There were also some Small Tortoiseshells, Aglais urticae, enjoying the minerals. I started to follow the stream bed down the hill and I was thrilled to see a Mother-of-pearl Blue, Plebicula nivescens. This was the first time I have seen this beautiful butterfly. 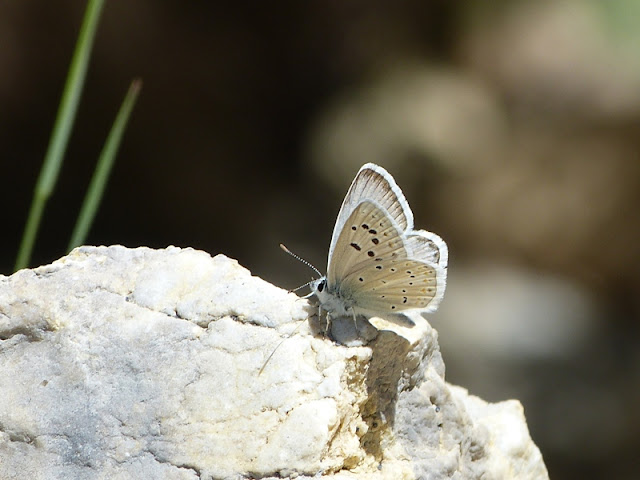 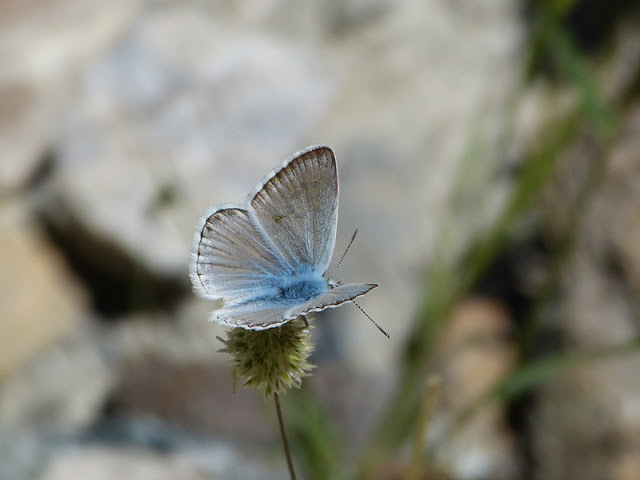 Further down the stream I noticed some fritillaries flying around. I think I had better talk about them in my next post.