We are just back from two weeks' holiday in the south of Spain, at a villa where we have had three previous holidays. We had a great time, but there is not a lot new to report as far as butterflies are concerned.

This year the south of Spain had experienced a relatively cool spring and start to the summer, so I imagined that the butterflies may have benefited from more flowers and greenery. Some butterflies were seen in greater numbers than I have seen before, but others were noticeably less common. 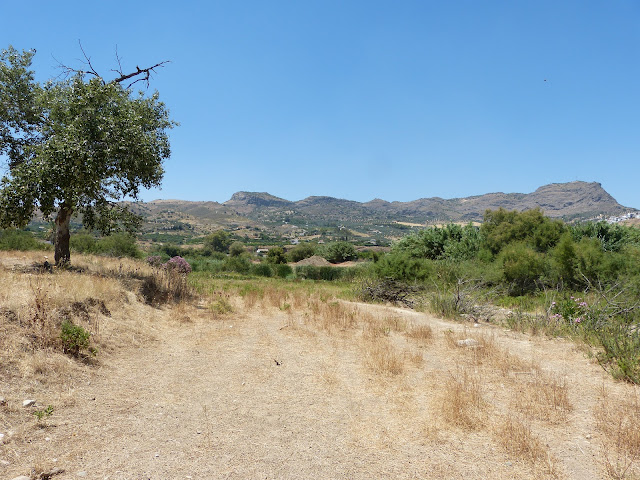 Small Whites, Pieris rapae, are usually fairly common there and this year I saw more than usual. Quite often there would be three or four of them on the Lantana plants in the garden. 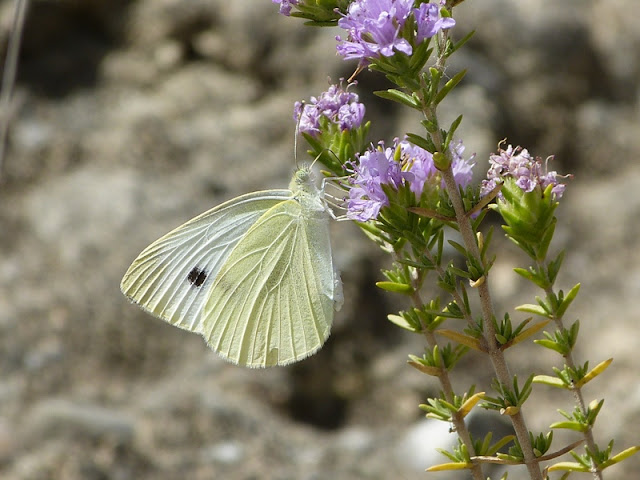 The other regular garden visitor is the Long-tailed Blue, Lampides boeticus. This year I saw more than I remember seeing in previous years. They regularly flew through the garden and showed a lot of interest in a Polygala shrub in the garden, where I have previously found their eggs. 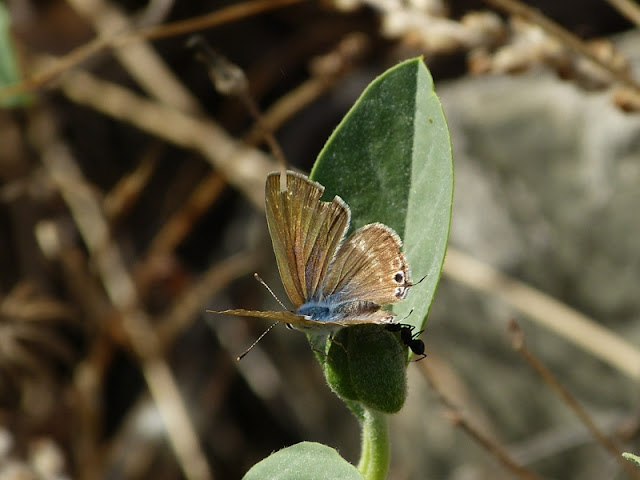 The first time we visited this area in 2012, I remember seeing hundreds of Southern Gatekeepers, Pyronia cecilia, in shady spots. That must have been a bumper year, as I have never seen them in such numbers since. This year I would see the odd one when I was out walking, but there were very few. 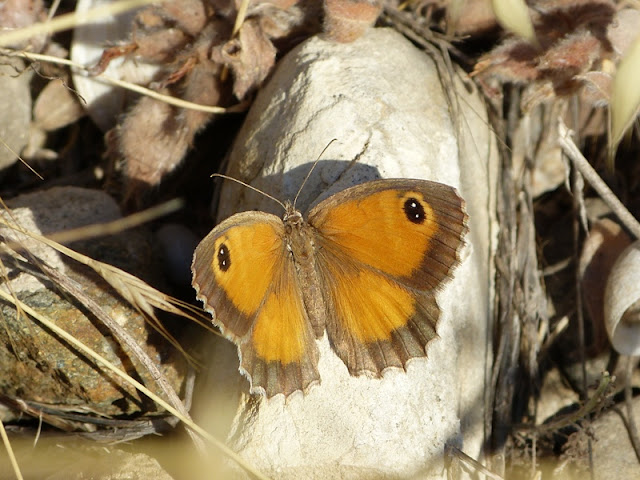 Probably the most common butterfly this year was the Southern Blue, Polyommatus celina. It used to be thought that this was the same species as the identical-looking Common Blue, Polyommatus icarus, but recent genetic studies have shown it to be a separate species. They seemed particularly small this year. I wonder if this is to do with the availability of the food plant earlier in the year? 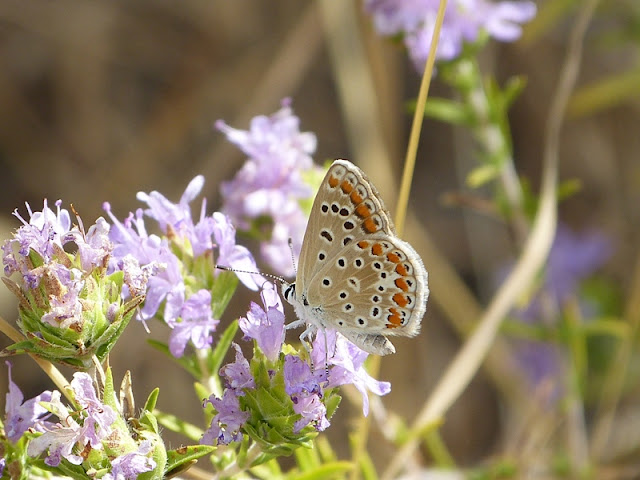 The Southern Brown Argus, Aricia cramera, also seemed to be more numerous than I have seen before. 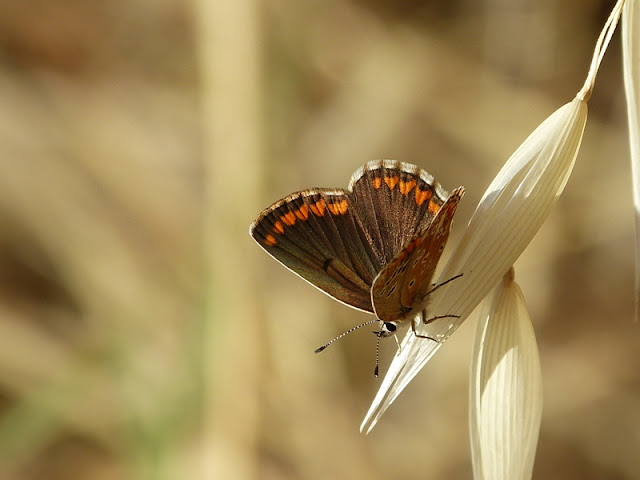 There were one or two Wall Browns, Lasiommata megera, on the path up into the hills, but nowhere near as many as I have seen in previous years. 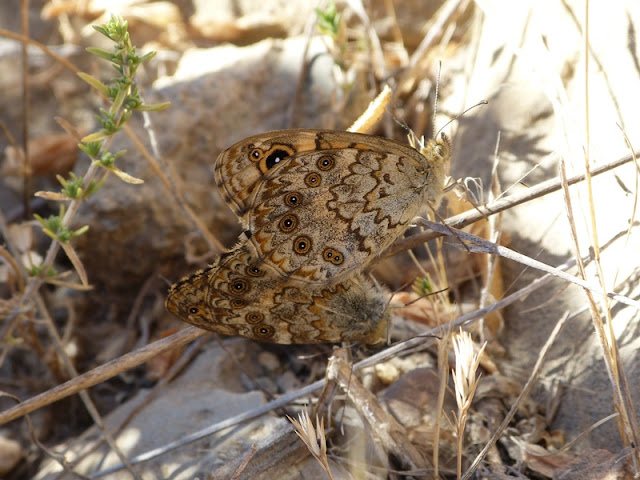 I was thrilled to see a Spanish Gatekeeper, Pyronia bathseba, very briefly. It is a butterfly that I have not seen previously and I couldn't understand why.  Sadly it was only a fleeting glimpse, but I saw it for long enough to be positive about its ID.

There were one or two Dusky Heaths, Coenonympha dorus, flying in the hills around the villa. In the past I saw them regularly on the tracks into the hills behind the villa. This year I only saw about six in total. 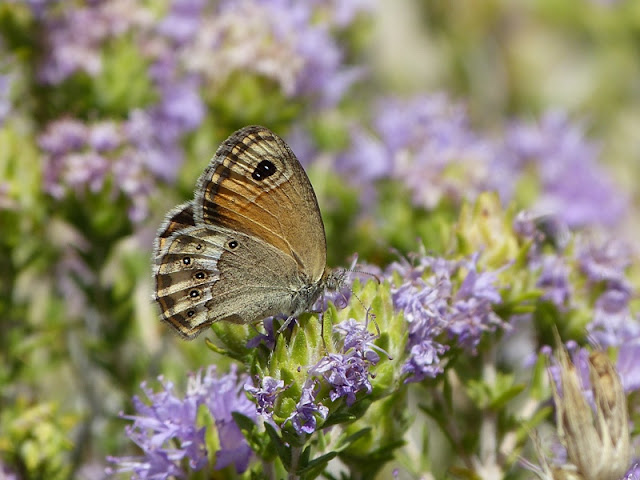 I regularly saw Geranium Bronzes, Cacyreus marshalli, flying among the Geraniums in the garden. I don't think I have seen so many of them in the past. I remember watching four of them squabbling over one particular plant and on a couple of occasions I saw them on Thyme and Lavender up in the hills. I don't think I have ever seen them outside formal gardens before. 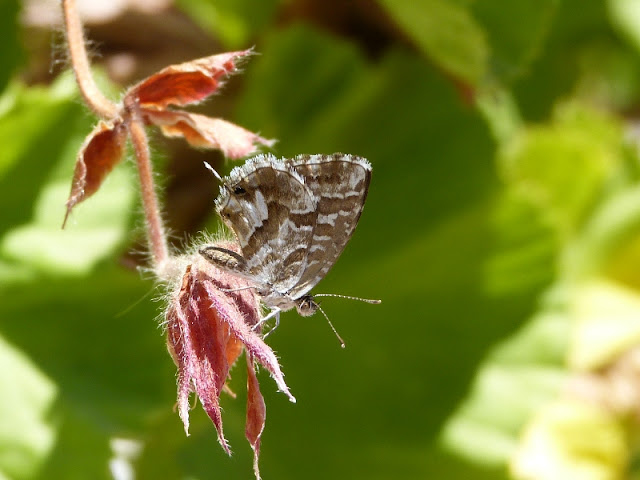 On previous visits I saw lots of Sage Skippers, Syrinthus proto, on the wild time in the hills above the villa. This year they were notably absent, other than one sighting on the track outside the villa. 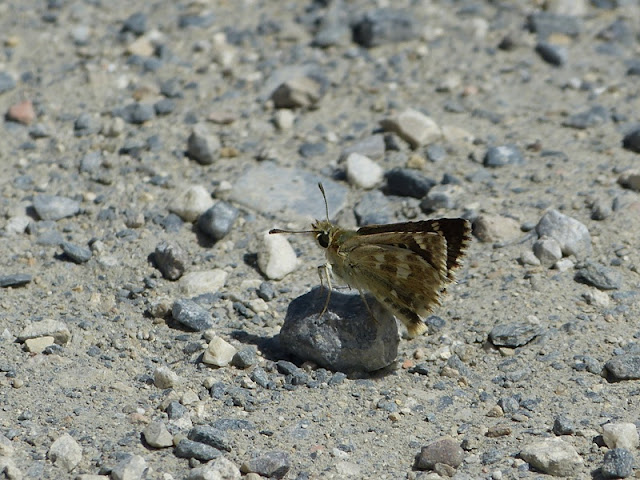 As in previous years I only saw one or two Clouded Yellows, Colias crocea.

The Small Heath, Coenonympha pamphilus, is a very common butterfly here in Scotland. In Southern Europe there is a different form that has less distinct markings. Previously, I have only seen two Small Heaths, but this year I regularly saw them. 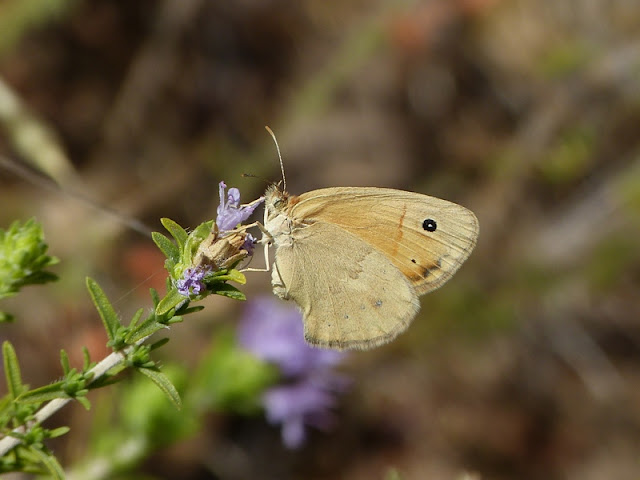 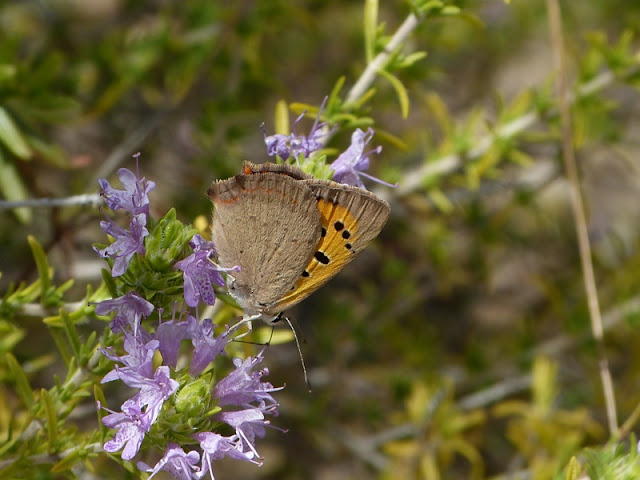 I saw several Meadow Browns, Maniola jurtina, this year. In previous years I have only seen one or two. 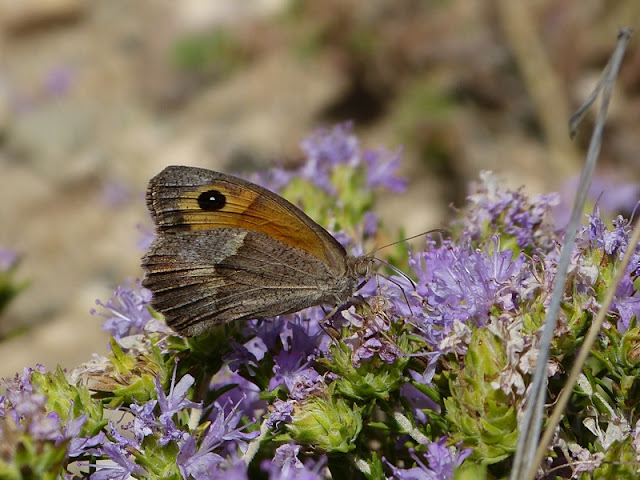 I visited an area next to the River Guadalhorce specifically to look for African Grass Blues, Zizeeria knysna. When I arrived there was a goat herder with his goats at the area I normally visit, so I walked upstream instead. This turned out to be a good move as there was a large area with Mint growing in it, which was covered in butterflies. I quickly managed to find some African Grass Blues. 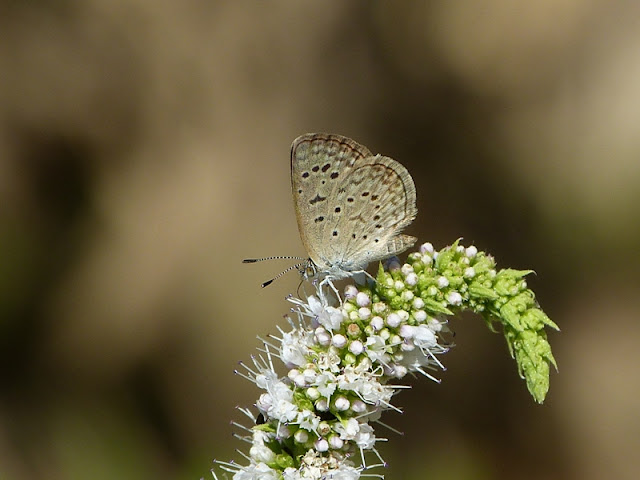 The Southern Blues were the same size as the African Grass Blues. They would fight over choice flower heads and it was difficult to tell them apart when they were flying. 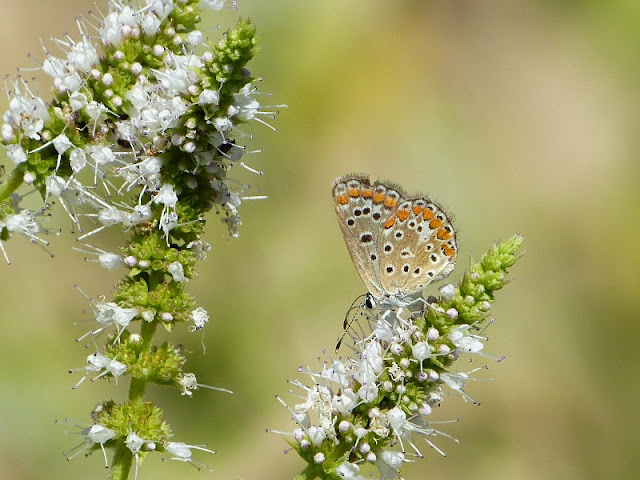 In the shade of some trees there were a few Speckled Woods, Pararge aegeria aegeria, and there were a lot of Small Whites, Small Coppers and Small Heaths in the area. 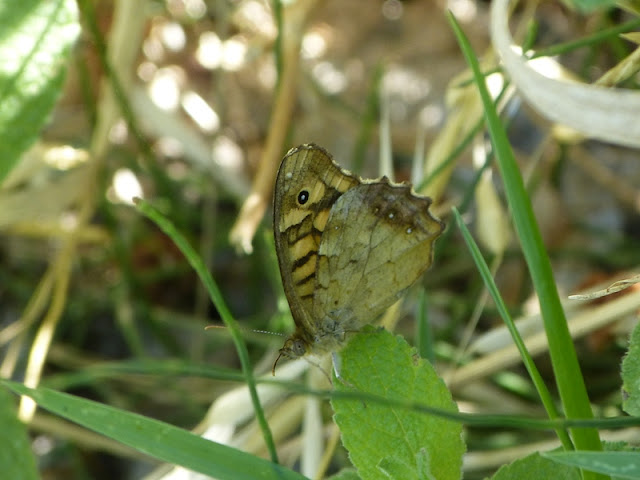 I saw a Mallow Skipper, Carcharodus alceae, there. A butterfly that I have seen quite regularly in previous years, but this was the only one I saw this year. 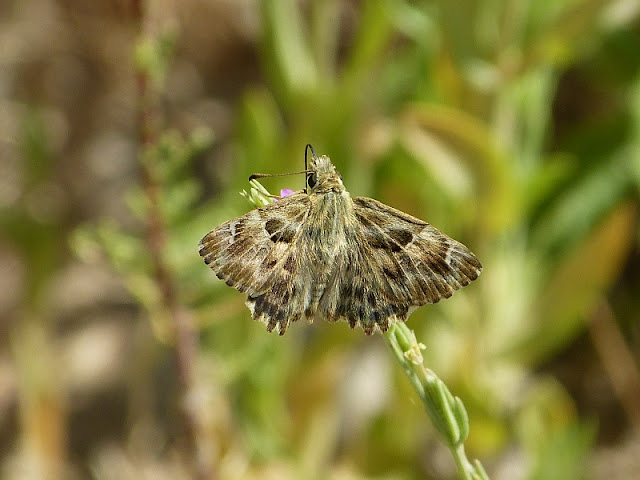 On our last day of the holiday I saw a Red-underwing Skipper, Spialia sertorius. Another butterfly that I had seen fairly regularly on previous visits. 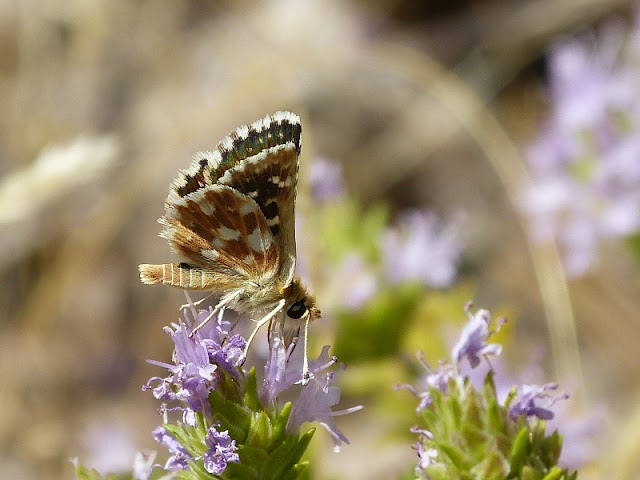 It is interesting to speculate what causes some species to do better than others in a given year. We are hoping to return to this area next spring, which will be really interesting for me to see what butterflies are about then.

During the holiday I visited the Sierra Nevada mountains twice and saw an amazing number of butterflies.