I am afraid that the start of this post is a little depressing, but please don't give up on it, there is a happy ending!!
I always do as much as I can to try to encourage butterflies to my garden and I have planted flowers to feed the adult butterflies and caterpillars. Although our garden is very small, we have tried to provide as much interest as we can for wildlife.
There is a small area just outside our fence where I plant Nasturtiums each year. Very often I discover that Small Whites, Pieris rapae, or Large Whites, Pieris brassicae, have been laying eggs on them. In 2015 there were none, but last year I found a batch of Large White caterpillars. 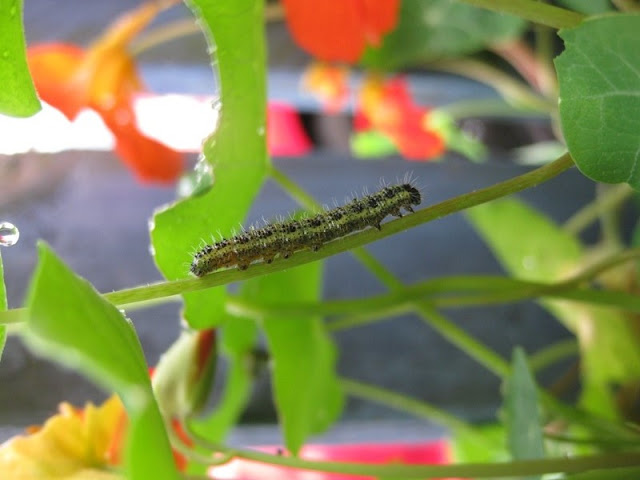 Sadly, they slowly disappeared, one by one and I suspect that the spiders living under the eves on the garden shed were responsible.

I had been keeping an eye on an Orange Tip, Anthocharis cardamines, caterpillar which was living on a Garlic Mustard plant near a local path. Unfortunately, one day I noticed that a neighbour had tidied up the side of the path and cut the Garlic Mustard down. I searched through the cuttings and found the caterpillar, and took it home, where I kept it on freshly picked Garlic Mustard seed heads. 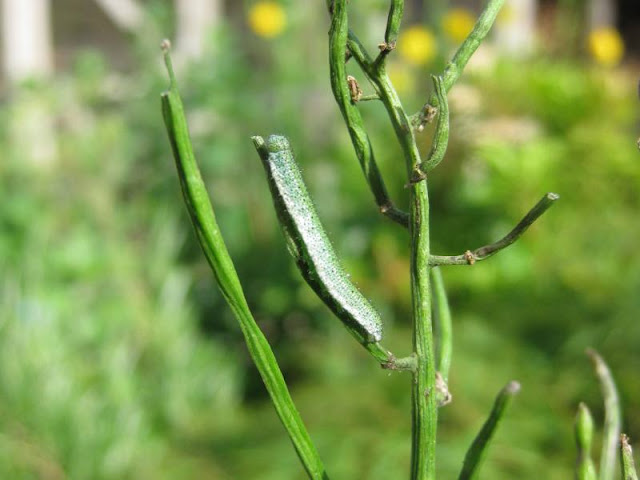 At about the same time, while I was walking my butterfly transect, I saw a Painted Lady, Vanessa cardui, laying eggs on some thistles. I picked one of the thistles, so that I could watch the egg and caterpillar develop. 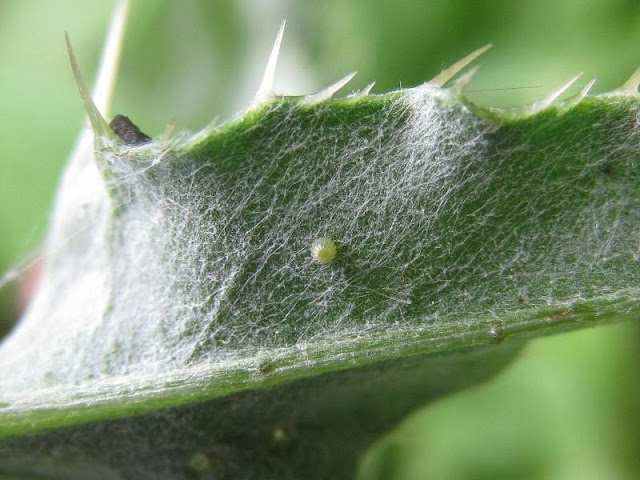 The egg was laid on 8th June and by 22 June, it had changed colour. 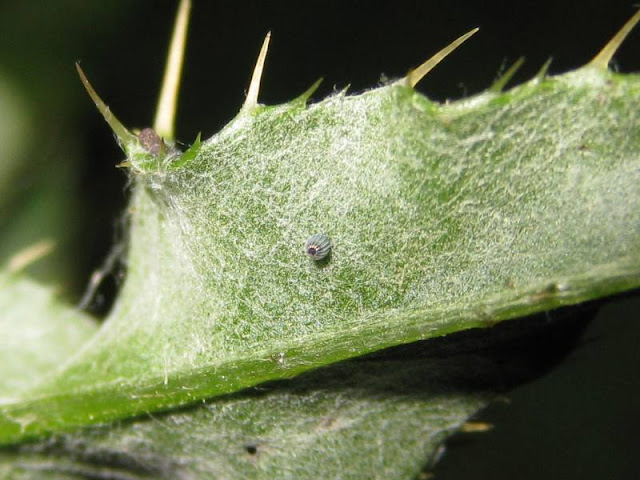 The following day it had hatched. 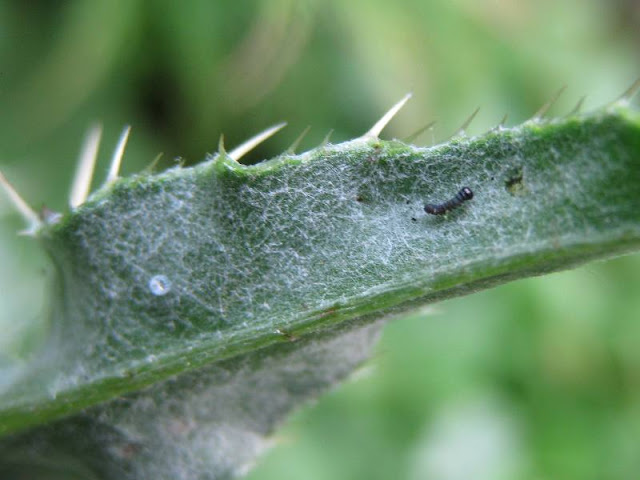 Sadly, the day after that we had torrential rain for about 40 minutes and when I later looked I couldn't find either caterpillar. I found the Orange Tip caterpillar floating in a puddle and fear that the Painted Lady had also been washed away.

Later in the year I was down at the property that we have inherited from my father. I was cutting back vegetation that was overhanging the stream and realized that I had cut a Garlic Mustard seed head. When I checked I discovered there was an Orange Tip chrysalis on it. I took the seed head and put it in a pot of soil. 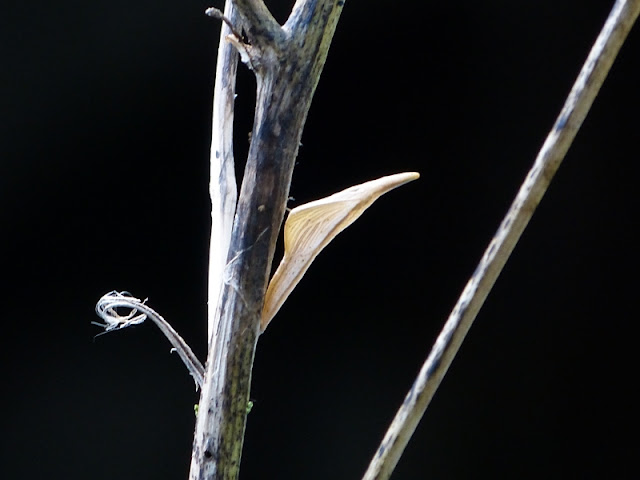 I then checked the vegetation along the side of the stream and found another six Orange Tip chrysalises. Despite spending hours looking for them in the past I have only ever seen two previously. As you can see they are very well disguised! 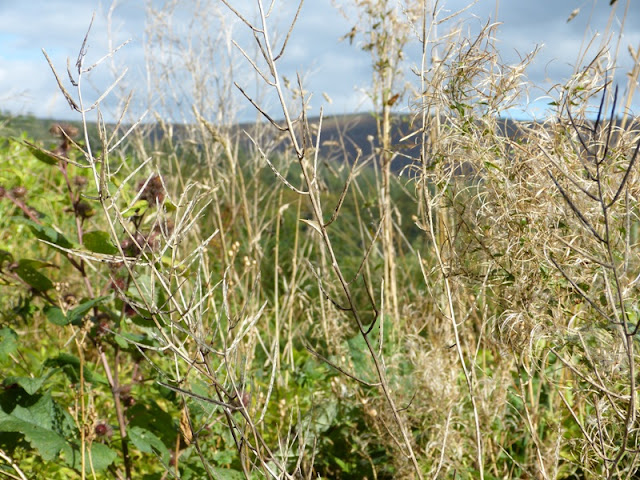 One of the chrysalis was dangling upside down, so I cut that seed head off and added it to the pot. 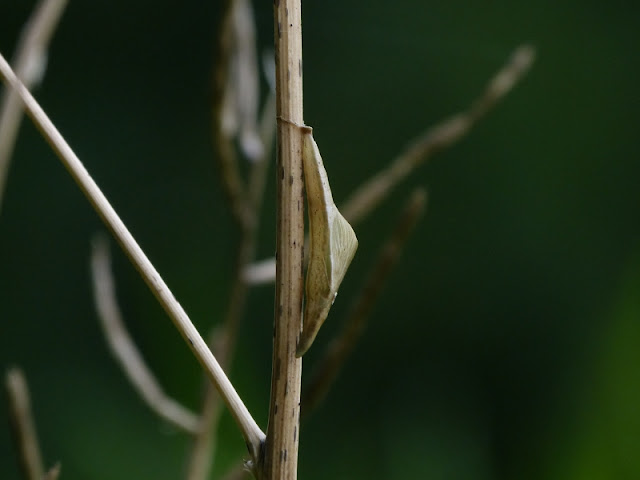 This species stays as a chrysalis from about July right through to the following April or May. So I bought a gauze cage and kept the chrysalises in my garage until this spring.
When the weather warmed up a bit I brought the cage outside. Towards the middle of April I noticed that the upside-down chrysalis had started to colour up. 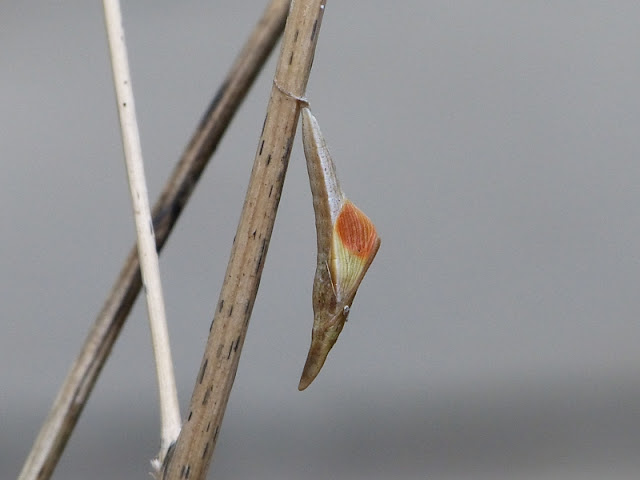 Two days later I was very dismayed to see that the butterfly had tried to emerge, but sadly its wings had stuck to the chrysalis and become deformed. I don't know why this has happened. It could be because the chrysalis was very dry after spending the winter in the garage, or I have been told that it could be just bad luck. 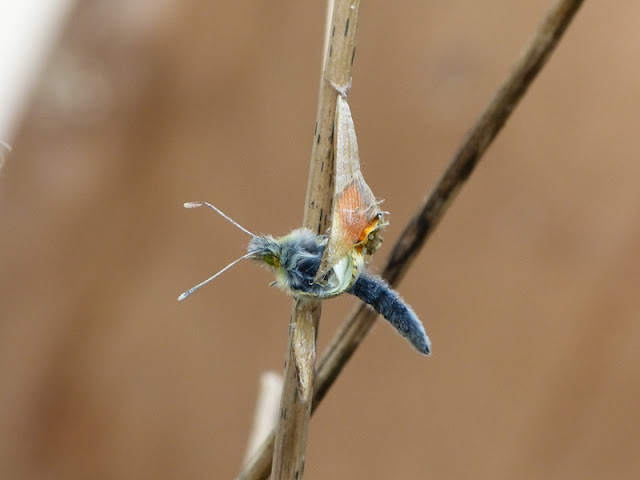 So, having had so many failures I was worried for the final Orange Tip chrysalis I had. It was two weeks later when it started to change in colour. This picture was taken on 22nd April. 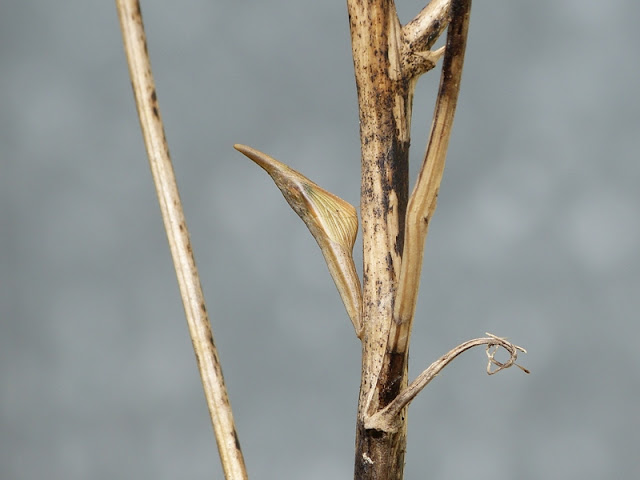 The following day the pattern on the wings was much more obvious. The chrysalis is actually leaning backwards with its wings folded under it, so we are seeing the pattern of the upper side of the wings. The lack of orange means that this one is a female. 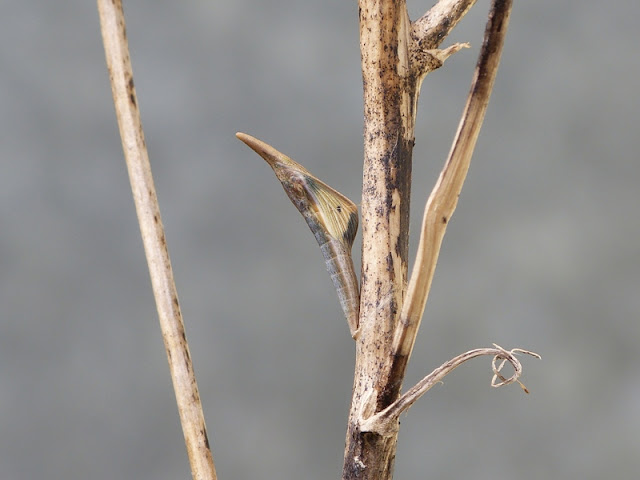 The weather turned very cold for a few days and cleverly the butterfly was able to delay its emergence. When I arrived home from work on the 27th April, my wife told me the good news - the butterfly had emerged successfully! What a thrill!! 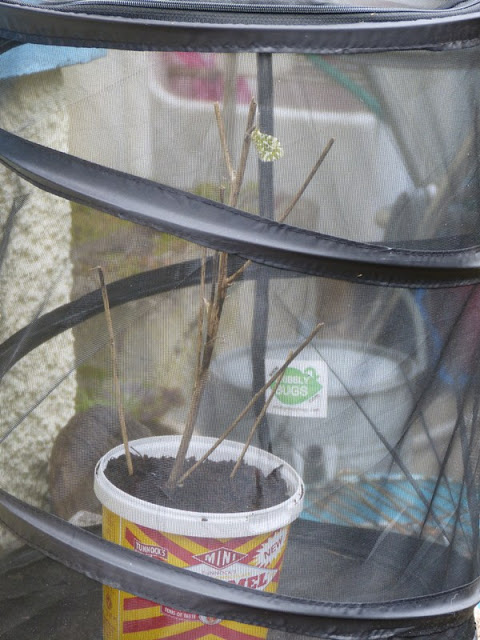 The following morning was lovely and sunny, so I decided to take the butterfly round to a local farm where they have a lot of lovely habitat for wildlife. I have noticed a corner of the farm yard where there was a patch of Garlic Mustard in a lovely sunny spot. The butterfly was on the top of the cage when I arrived, so I carefully unzipped it and let it warm up in the sun. 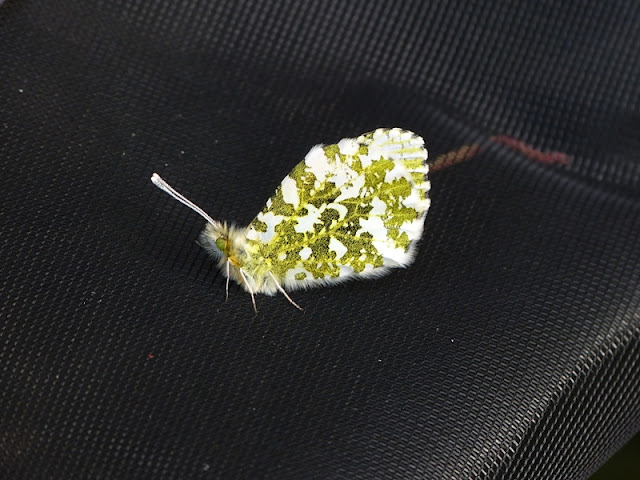 After a few minutes it opened up its wings to absorb the warmth of the sun. 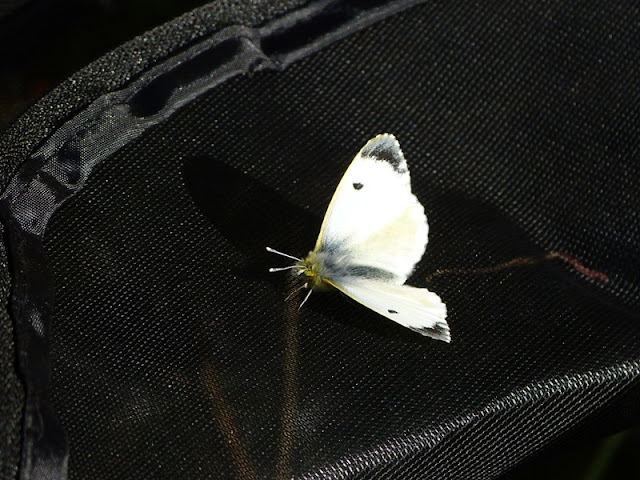 And a few minutes later it took its first flight and landed on an Honesty plant, which is also used as a food plant by the caterpillars. 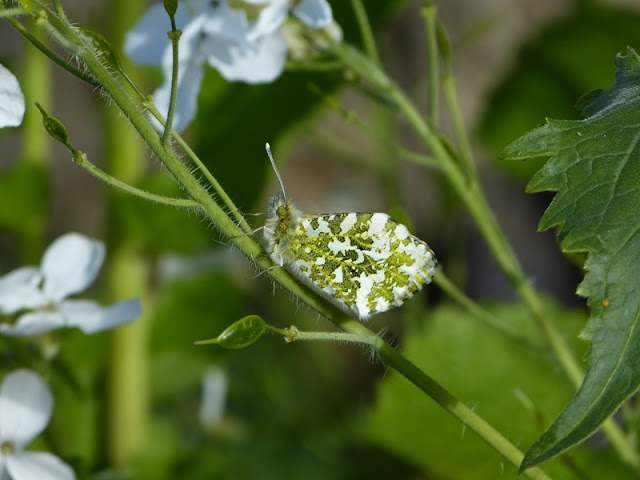 She sat there for some time and then flew around for a little, settling on another Honesty flower. She didn't feed, but just seemed to be enjoying the warmth of the sun. 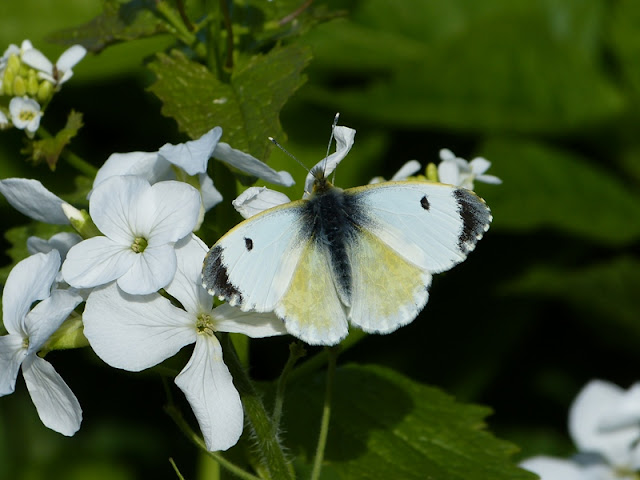 It was such a joy watching her fly around and enjoy here new surroundings. I was thrilled that she had a lovely sunny day to enjoy her new life.
All of this has made me realize what a perilous existence butterflies have. I suppose that to maintain a sable population each butterfly only needs two of its eggs to reach adulthood and go on to breed.
Posted by Nick Morgan at 23:40 14 comments: