I realised that I have not posted about our holiday to Malaga in September 2019, so ...
We went on a week's holiday to southern Spain at the end of September 2019 to catch some much needed sun! We were at the same village we have visited on five previous occasions. Of course, I was keen to fit in a few walks to look for butterflies, but I wasn't expecting to see much with it being so late in the season. I did have a couple of nice surprises, though!
After an amazingly easy journey we arrived at the apartment in Alora in the early afternoon. Claire needed a sleep, which gave me a perfect excuse to go and look for butterflies. I started at my old favourite butterfly spot, which is just above the villa we used to rent. It is a steep valley up a mountain, and the way the track has been cut into the side of the valley shades an area where thyme, rosemary and lavender grows. During our normal July holidays these plants provide rare flowers and nectar in the area.
When I had visited this spot in April I was too early for any flowers, so there were very few butterflies. This time I was far too late for any flowers and after a long search all I saw was a female Lang's Short Tailed Blue, Leptotes pirithous. It was laying eggs on a rosemary plant. 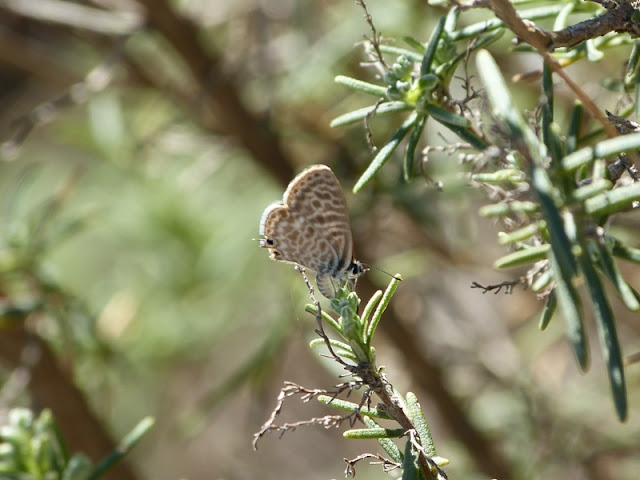 I then decided to try a spot I had found in April above the village cemetery. Here there are tracks through olive groves where there had been a lot of wild flowers. However, in September there were no flowers left under the olive trees. I noticed that there were yellow flowers along the edge of a track and what I figured out was a helipad. These plants must have been able to get to the moisture under the concrete.
The plants proved to be a draw for butterflies. There were a couple of Long-tailed Blues, Lambides boeticus, flying about furiously in the heat, but they wouldn't stop for a picture. More biddable was this Mallow Skipper, Carcharodus alceae, which looked as though it had fairly recently emerged from its chrysalis. 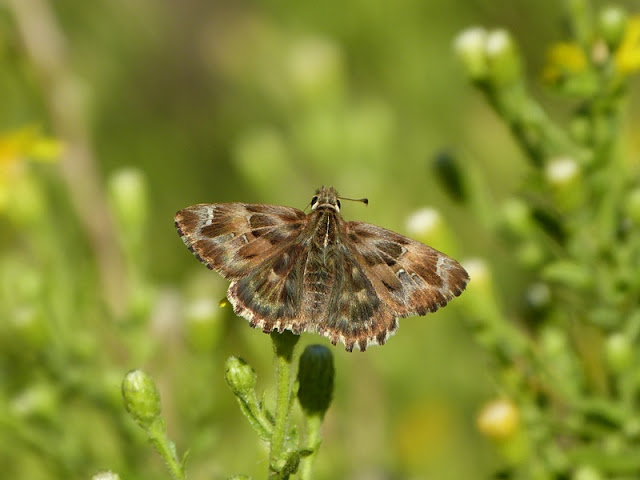 This little Sage Skipper, Muschampia proto, was flying in the same spot. 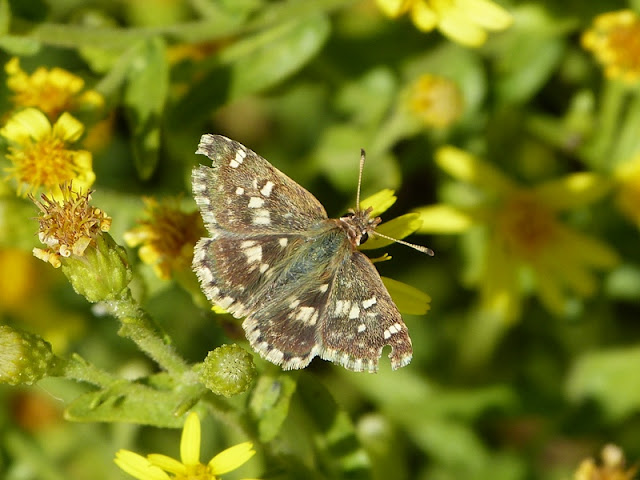 There were also at least five Painted Ladies, Vanessa cardui. 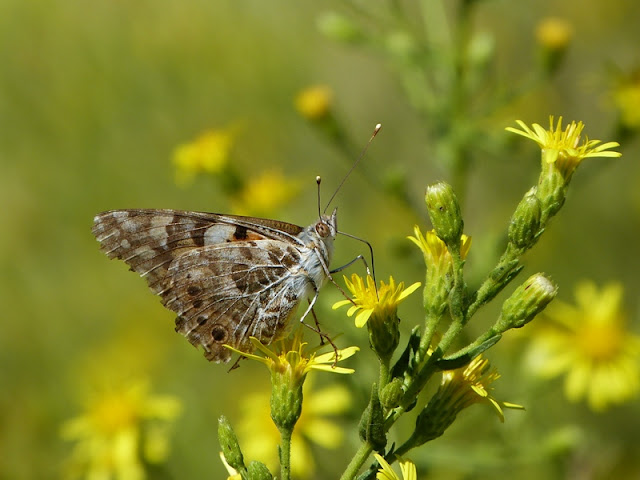 Having had so many migrate to Scotland in 2019, I wondered to myself if these individuals had been born in Scotland and were on their way to Africa.
There is an area down by the river where in the spring there are a lot of wild flowers and in summer there is an area of mint, which proves very attractive to butterflies. In September there were far fewer flowers, other than the same yellow flowers I had seen in the hills. However, this still proved to be the best place to find butterflies near to the village, despite the goat herder regularly passing with this goats! Butterflies seen there included, Bath White, Pontia daplidice, Lang's Short-tailed Blue, Leptotes pirithous, 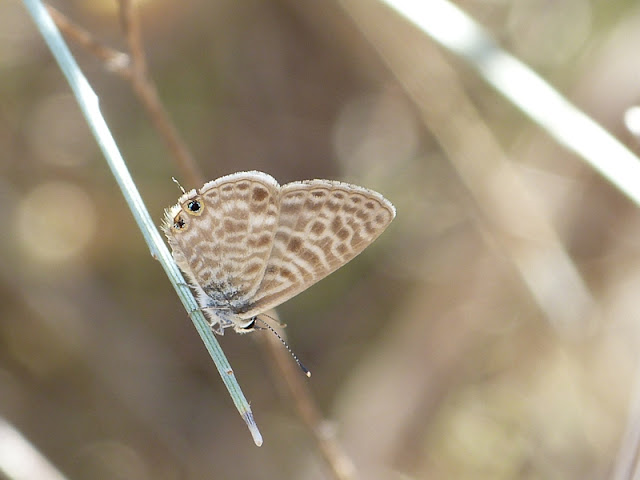 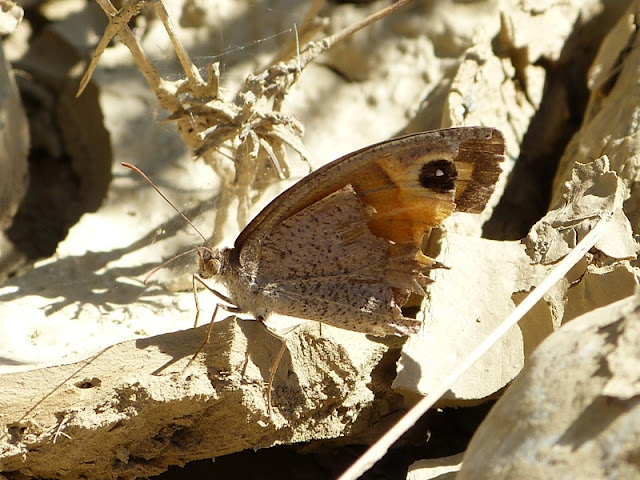 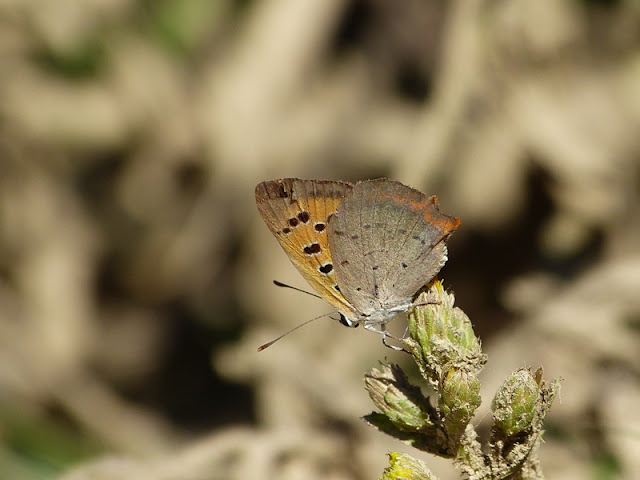 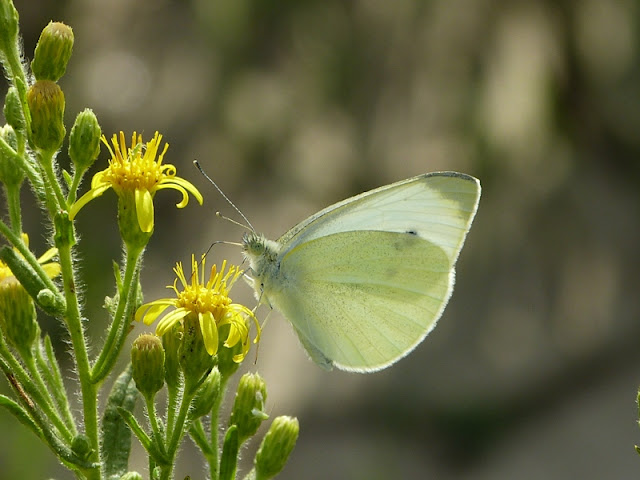 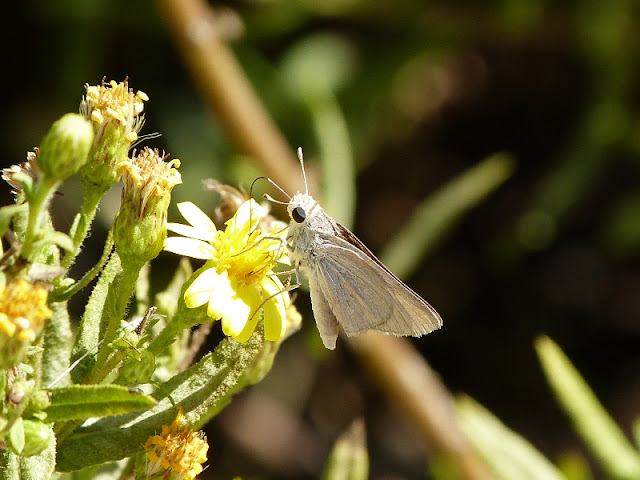 ... and one quite different-looking female. 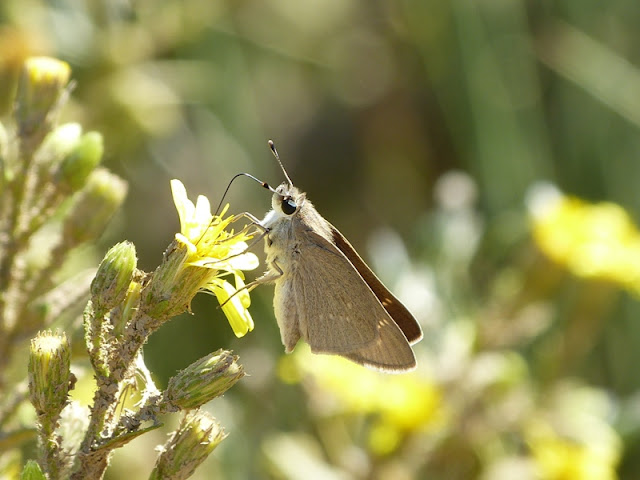 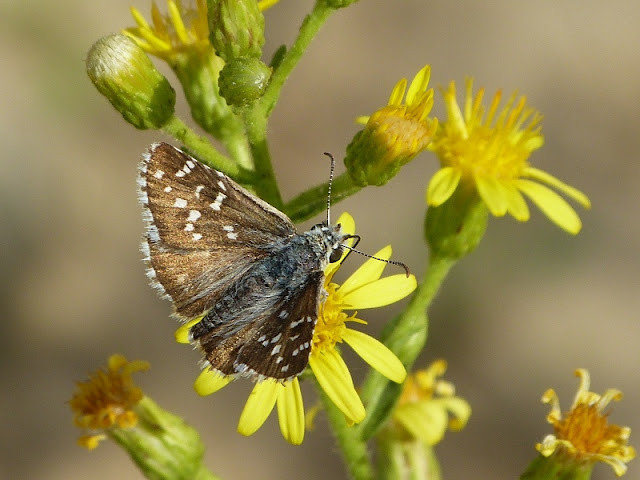 There were also a lot of  Painted Ladies and my favourite of all, the little African Grass Blue, Zizeeria knysna. 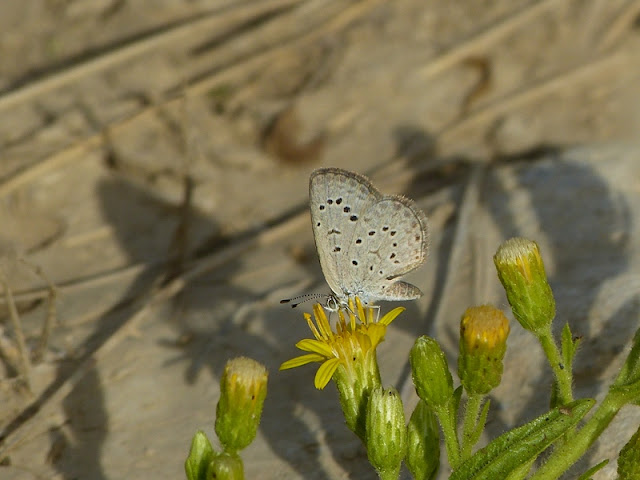 Occasionally, in the village I would see a small butterfly flying around a shrub bed or window box. These always turned out to be Geranium Bronzes, Cacyreus marshalli. 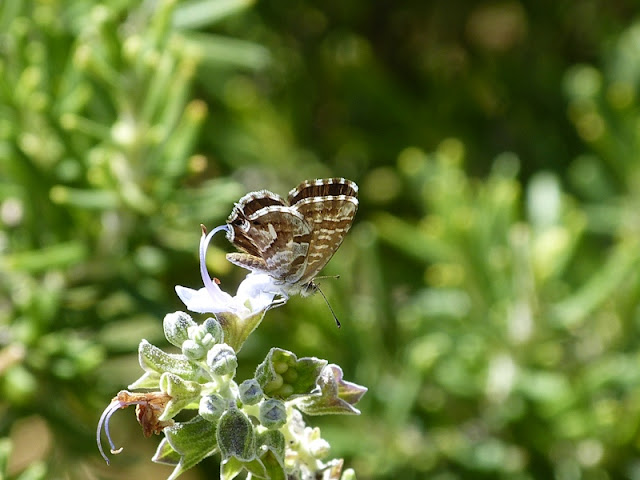 Most of the butterflies I saw at this time of year were the same species as those I usually see in the summer. I also visited a couple of areas further afield, Antiquera and Casarabonela, where I saw a few different species. I'll report on these in my next posts.
Posted by Nick Morgan at 20:01 No comments:

I was really excited to find a Scotch Argus, Erebia aethiops, flying in our garden in August last year. This left me wondering if there is a colony somewhere close by, or if there has always been a small colony in our woodland. I watched it laying eggs in the grass and then didn't dare cut the grass in that area for the next 12 months!!

On 11th August this year, despite the weather, I spotted a Scotch Argus in exactly the same place. It was rather the worse for wear and looked as though it was at least a week old. 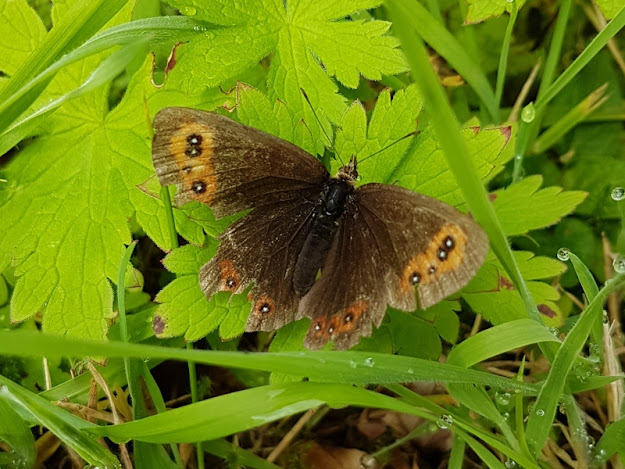 It was a female again, but I didn't see it laying eggs. It was still flying in the same area the following day. 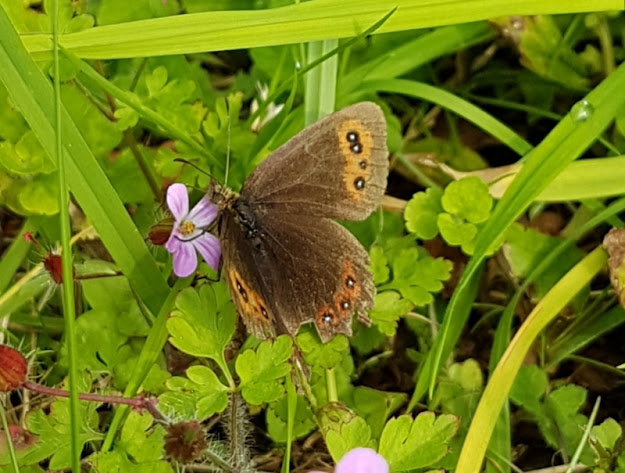 Two days later I saw another Scotch Argus flying down near the wild flower meadow I am trying to develop.

I still haven't found the answer to my question of where these butterflies have come from. I had been hoping to explore likely habitats in the area this summer, but sadly good weather never coincided with my days off. I am aware of an old record in the next little valley a kilometre away and someone has told me that they are found about five kilometres from here, further up the valley. I hope I will be able to explore both of these areas next August.