The Small Pearl Bordered Firitillary, Clossiana selene, is a medium sized butterfly that occurs in much of Europe, other than the Iberian Peninsula and Ireland. It seems to occur in scattered colonies across the UK, mostly towards the west of the country. As far as I am aware they do not occur in East Lothian, although there have been a couple of unconfirmed sightings here.

Its preferred habitat is damp, marshy, woodland areas and I suppose that may explain why they tend to occur in the west of the country which is generally wetter. 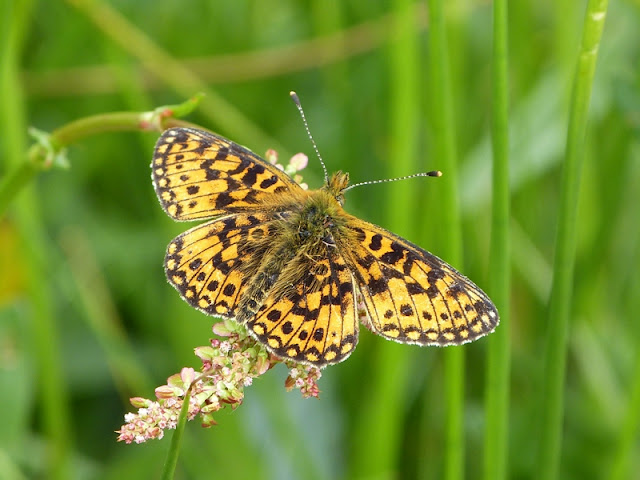 As with many species of Fritillary, the larval food plant is various species of Viola. I find it interesting that this butterfly lives in such a specific habitat, when the food plants are found much more widely.

This species spends much of its life as a caterpillar. The adult butterflies are on the wing for a period of about six weeks during June and July. Their eggs will hatch in July and the caterpillars will live through to the following May before becoming chrysalises.

This week I heard that there were a lot of Small Pearl Bordered Fritillaries at a Scottish Wildlife Trust reserve in the Scottish Borders. On Tuesday I headed down to Gordon Moss to take a look for myself. I had been sent detailed instructions on how to find the reserve and then whereabouts on the reserve to look. No sooner had I arrived at the gate into the field I saw my first one and over the course of an hour I saw about 40 of them. 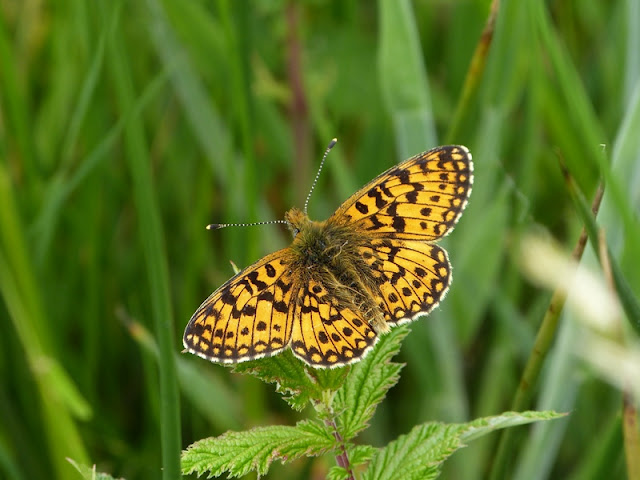 I was surprised how variable the markings were between individual butterflies. 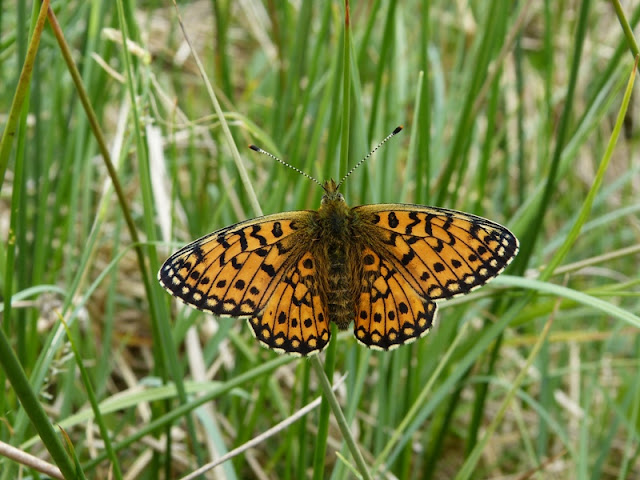 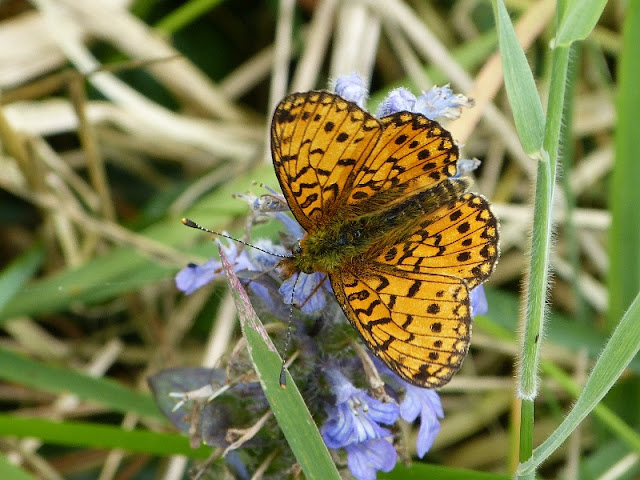 I was hoping that I would see some Small Pearl Bordered Fritillaries perched with their wings closed, as the markings on the underside of the wings are really beautiful. It was quite a cloudy day, and although I had been told that they would still be flying, I think that they were taking any opportunity to absorb the few solar rays available. As soon as they landed they would open their wings up towards where the sun was trying to shine through the clouds.

However, I presume this is a female which has recently emerged. I first spotted her because there were a couple of males flying about where she was in the grass. She kept climbing grass stems presumably as she was still drying her wings. In the process she kindly revealed the underside of her wings! 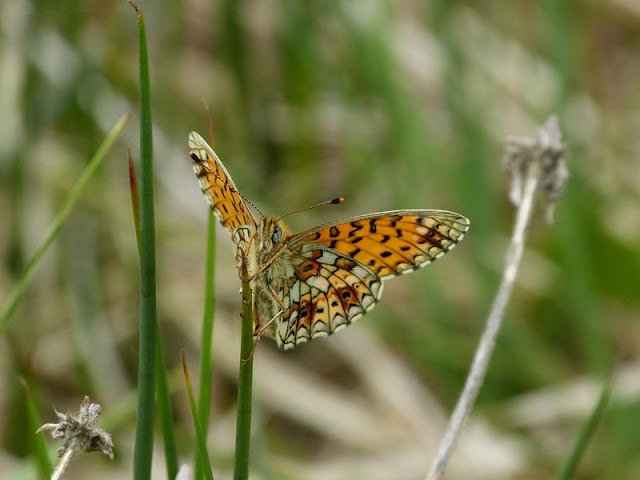 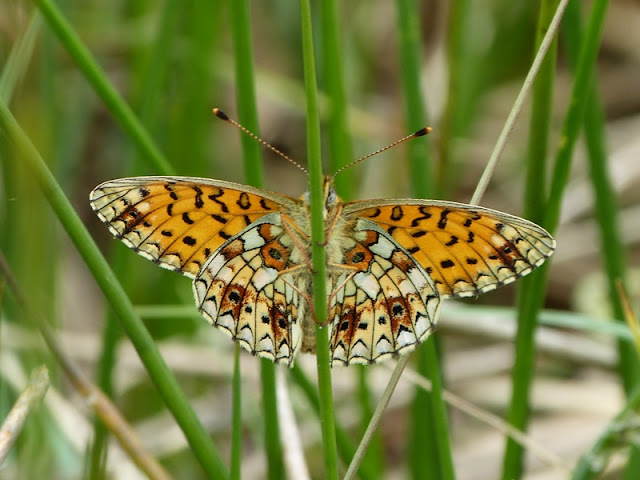 The butterfly below is an aberrant, which doesn't seem to be that uncommon with fritillaries. Normally people get quite excited about aberrations in butterflies, but I have to admit that I felt rather sorry for this one. I think its wings were a little malformed and it seemed quite an effort for it to fly. It also had a wonky antenna! 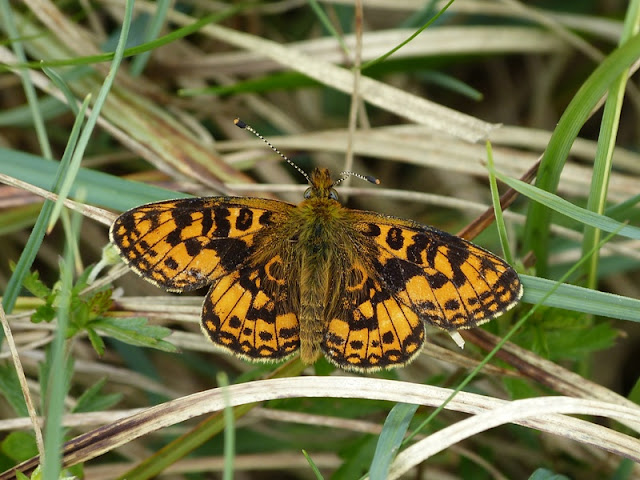 It was lovely to see these butterflies. They appeared more orange in real life, but they were still very difficult to keep an eye on when they were flying.

Late May and early June are normally a quite time for butterflies in this part of Scotland. Between April and May we see the butterflies that have hibernated as adults and reappeared when the temperatures warm up. We also see the first of the new species for the year. Here that consists of four species of white butterflies and more recently Speckled Woods and Wall Browns have moved into the area.
Normally, by the beginning of June, these spring butterflies reduce in numbers and there isn't much to see, but this year, having had such a cold spring there are still a few white butterflies on the wing.
My usual antidote to this quite spell is to take a trip down to a small location in the Scottish Borders where there is a colony of Small Blue butterflies, Cupido minimus. This is the UK's smallest species, having a wingspan of only about 16 to 20mm. Their upper wings are often described as dull brown with a silver underside. Personally, I find these butterflies far from dull!

The males have a scattering of blues scales on the upper wings. 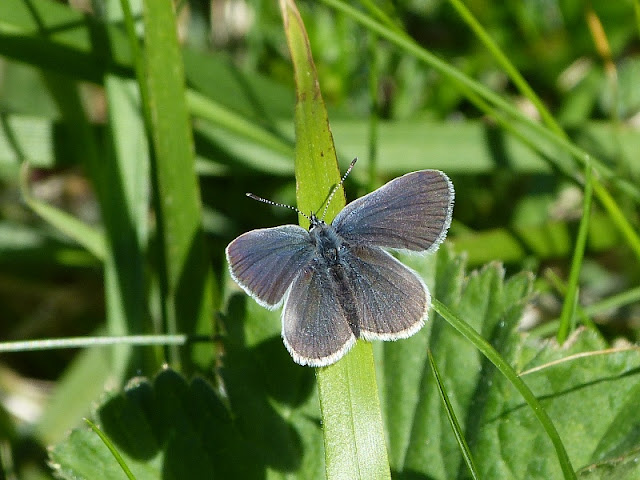 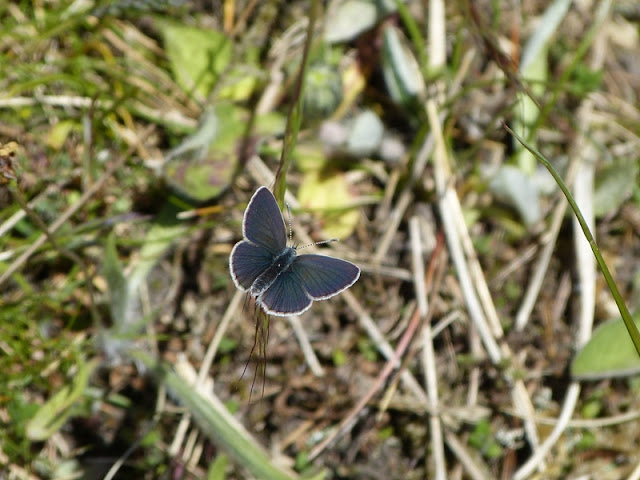 Small Blues occur in a few different locations around the UK. They are mostly found in the south of England and the south of Wales. There are also scattered colonies on the east coast of Scotland. Because many of these colonies are isolated they are vulnerable to land use changes. The colony I visit in the Scottish Borders, like many, is on a coastal slope covering an area about 50 metres by 25 metres. This year I was delighted to hear that they have also spread to a small valley a little further along the coast. 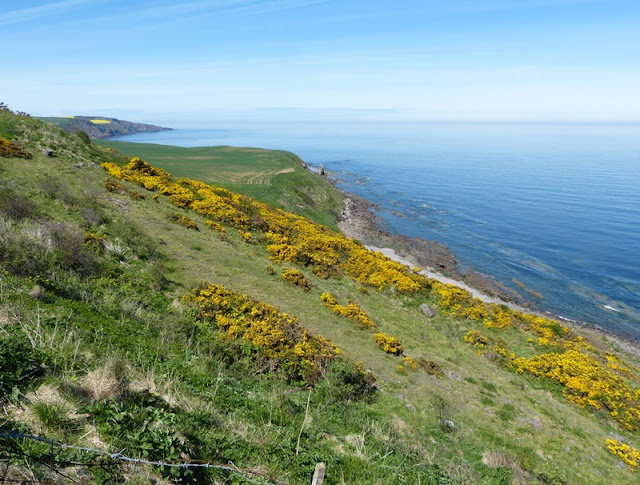 I had a look in both areas and estimate that I saw about 60 individual butterflies. It is great to know that while most species are suffering from the terrible summer last year and cold spring this year, the Small Blues are doing very well.

Because of their colour and small size they are quite difficult to spot, so I was delighted to find this couple hiding in the grass. 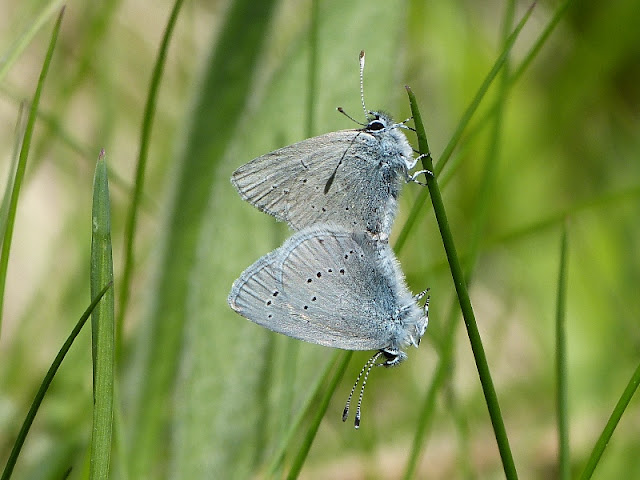 Eggs are laid on Kidney Vetch, Anthyllis vulneraria, and the caterpillars feed on the flower heads. Kidney vetch likes alkaline conditions and grow on poor soils where it won't be smothered by more vigorous vegetation. 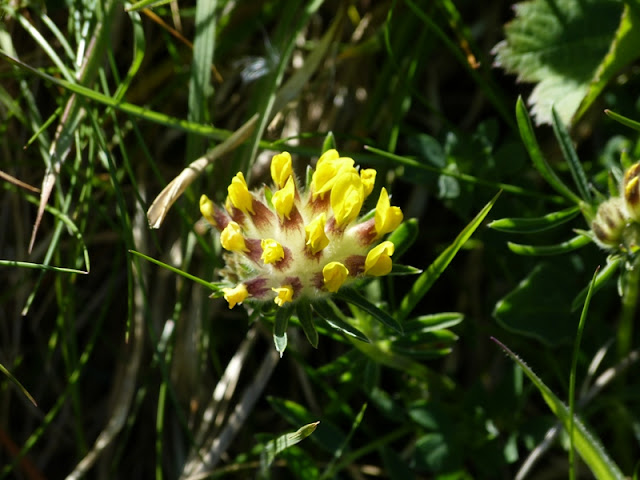 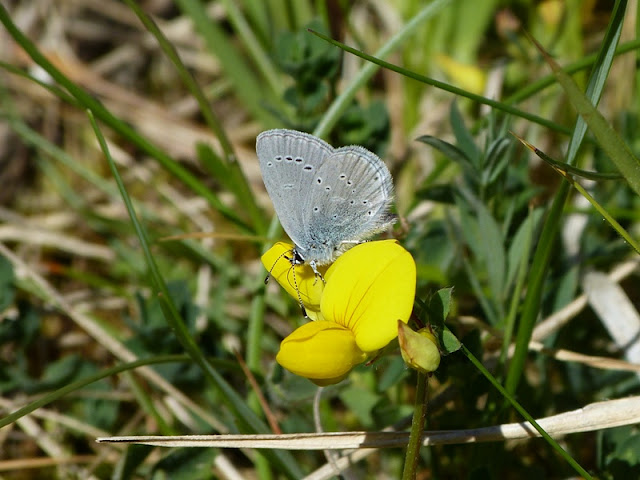 This Small Blue is feeding on Birds Foot Trefoil, Lotus corniculatus, which gives an idea of how small the butterfly is.

I have previously posted about Small Blues but I love these butterflies so much I couldn't resist mentioning them again!!
Posted by Nick Morgan at 21:40 3 comments: