The Speckled Wood, Parage aegeria, is a small to medium sized butterfly with a wingspan of about 50mm. As the name suggests it is usually found in wooded areas, choosing sunny sheltered spots, where males tend to take up territories.


It is a butterfly that excites me, as until recently it hadn't been recorded in East Lothian. Over the last few years it has been extending its range in the UK northwards. In 2009 a colleague saw one just inside East Lothian and another one was seen the following year. In 2011 I came across a small colony of Speckled Woods at John Muir Country Park, about ten miles further along the coast.

In only two years since then they have continued to spread through East Lothian and now they are found in many small areas of woodland over about two thirds of the county. 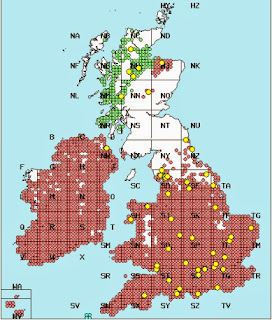 The map on the left above show the distribution of Speckled Woods in 1970. I have marked East Lothian in red. (This map is taken from The Provisional Atlas of the Insects of the British Isles, 1970) The map on the right is taken from the UK Butterflies web site and shows the distribution in 2004. The butterfly has clearly extended its range considerably in those 40 years. It has also continued to spread northwards by about 100 miles since the second map was produced.

The caterpillars feed on a variety of different grasses. In the UK adult butterflies are on the wing from late March to early October in several generations. They can overwinter as a caterpillar or chrysalis. In southern Europe adult butterflies can be seen almost all year round.

The Speckled Wood occurs over most of Europe and there are four subspecies. Pararge aegeria aegeria occurs in northern Africa and south-west Europe to about half way across France. It has orange markings on a brown background.


The subspecies that is found in much of the UK is tircis, which occurs in much of north east Europe. This has smaller cream markings instead of orange and a slightly darker background colour.

There are two other subspecies - insula, which occurs on the Isles of Scilly. Its markings are somewhere between cream and orange. The subspecies oblita occurs in north-west Scotland and its markings are said to be closer to white on a dark brown, almost black, background.

When we were in Tenerife last July, I was delighted to find the Canary Speckled Wood, Pararge xiphioides. This looks much like the southern European subspecies. The most obvious difference is the white markings on the underside of the wings.

There is another species of Speckled Wood, Pararge xiphia, which lives on the island of Madeira. I haven't seen it, but that gives me a good excuse to go there on holiday in the future! I wonder if the family agree!!
Posted by Nick Morgan at 21:03 23 comments: