In April 2010 we returned to our friend's villa in the Algarve. This proved to be a very good time of year to be there for spotting butterflies and I found a small area where the land had been leveled in the past and which was now covered in wild flowers. Just next to this were areas of cork oak and grass offering a variety of habitats. 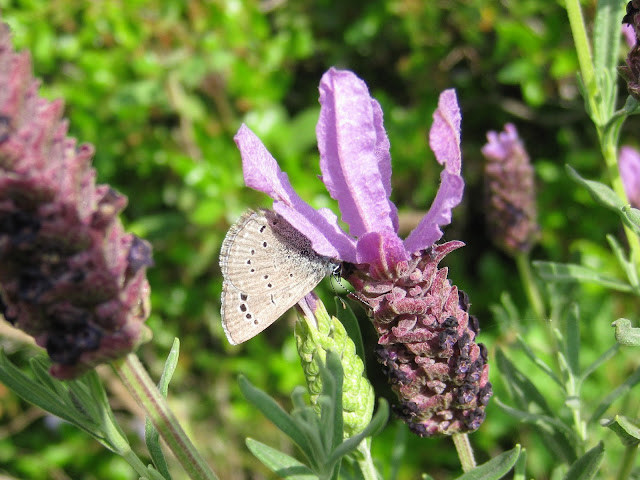 This was one of the first blues I saw, which I later identified as a Black-eyed Blue, Glaucopsyche melanops. 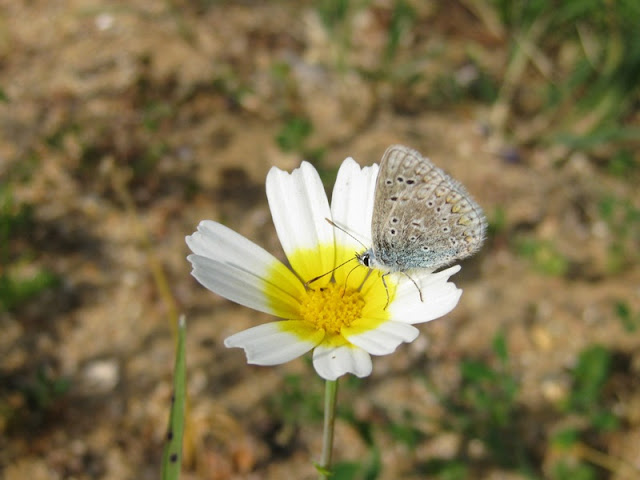 There were a few more Common Blues, Polyommatus icarus, around, but they were all rather worn out. I wonder if they were survivors from last year. 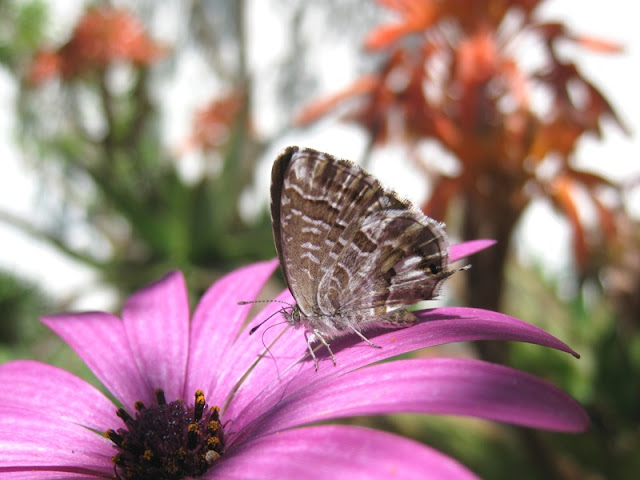 Back at the villa, Geranium Bronze, Cacyreus marshalli, were busy in the garden. 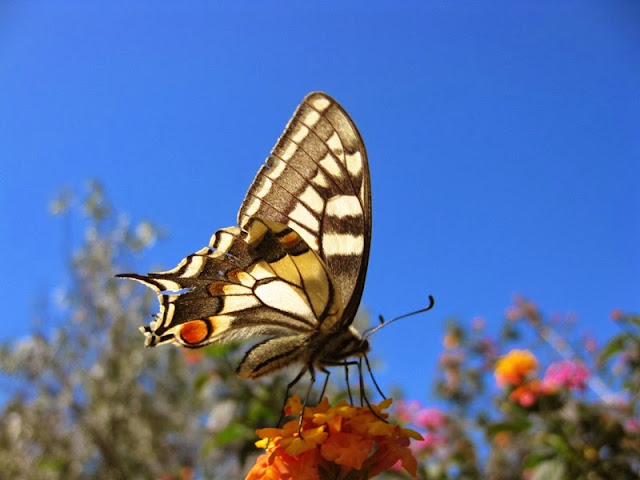 This Swallowtail, Papilio machaon, was in the abandoned orange grove next door. 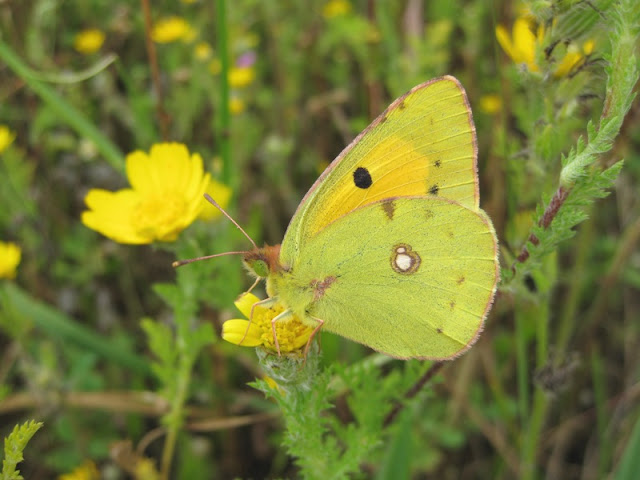 Back at the wild flower patch, I was delighted to get some pictures of Clouded Yellows, Colias crocea. 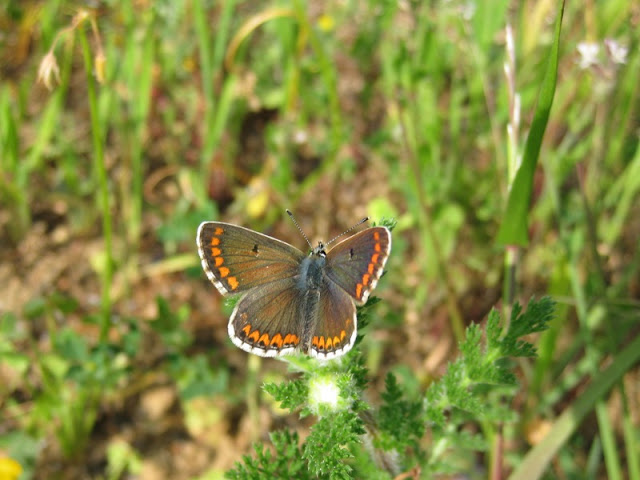 I saw a Southern Brown Argus, Aricia cramera, in the same area several times. I suspect it was the same specimen that I saw each time. 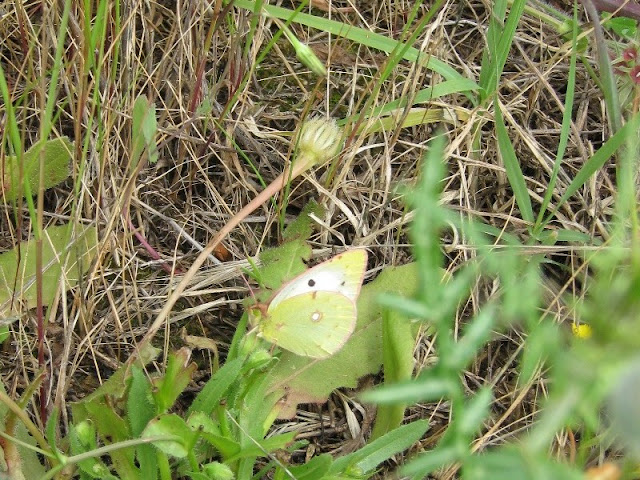 This fuzzy picture was the best I could do of the pale form of the Clouded Yellow, Colias crocea. 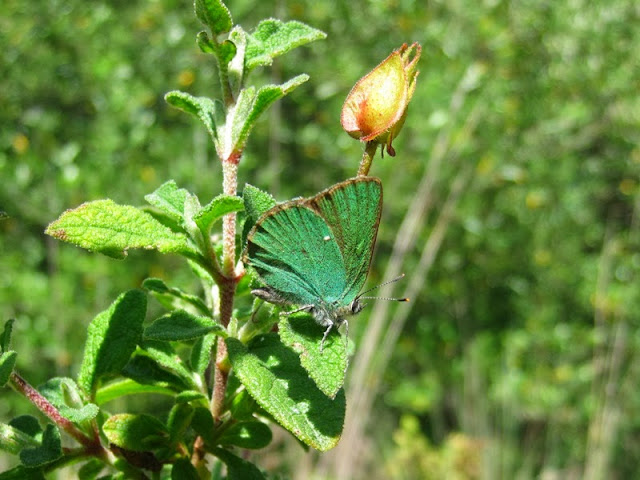 Amongst the cork oaks were a few Green Hairstreaks, Callophrys rubi. These are beautiful little butterflies that I had never seen before. 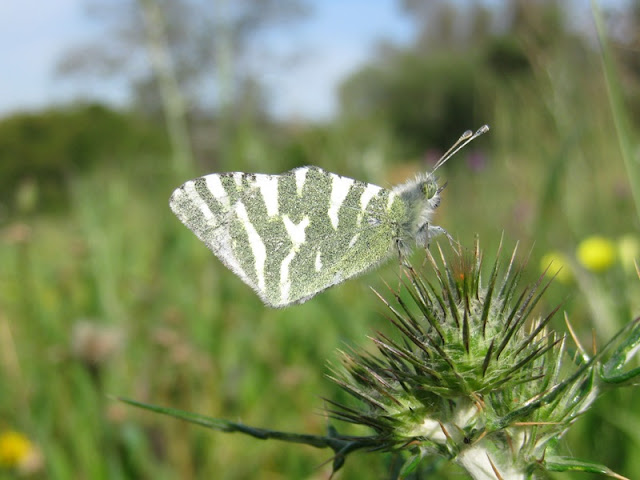 Green-striped Whites, Euchloe belemia, were probably the most common butterflies in the area. I really love these striking little butterflies. Western Dappled Whites, Euchloe crameri, were also fairly common. Another beautiful butterfly that reminded me of my favourite butterfly, the Orange Tip. 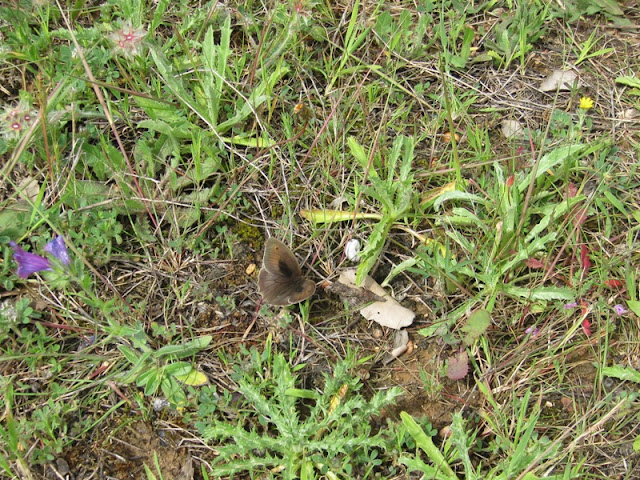 I briefly saw a Meadow Brown, Maniola jurtina, a common butterfly back home. 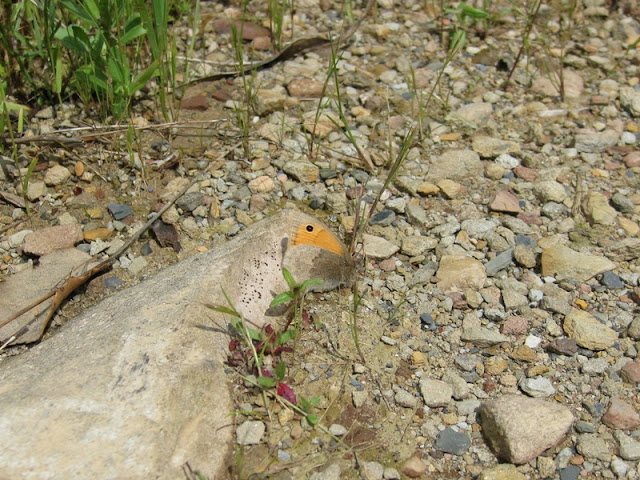 Another common butterfly back home is the Small Heath, Coenonympha pamphilus. We saw this one in a valley up in the mountains. 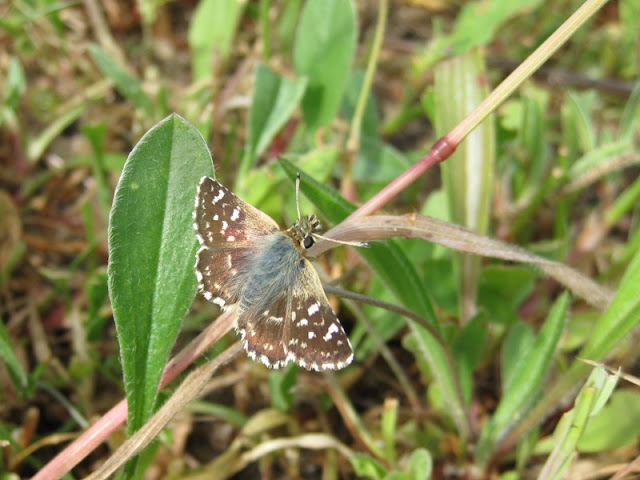 The moment I took this picture is one of those moments I will always remember. Just after I took the picture my wife came to find me to tell me that she had heard on the news that a volcano had erupted in Iceland and that all flights to the UK had been cancelled. The result of the chaos was that our 14 day holiday ended up as a 22 day holiday, but the last 8 days weren't all fun. We spent hours at internet cafes researching trains, buses and ferries across Portugal, Spain and France to see how we could get home. We also considered renting a car or even buying an old car to get home. After several visits and long queues at the airport our flight was re-scheduled. Anyway, this is a Red-underwing Skipper, Spialia sertotius. 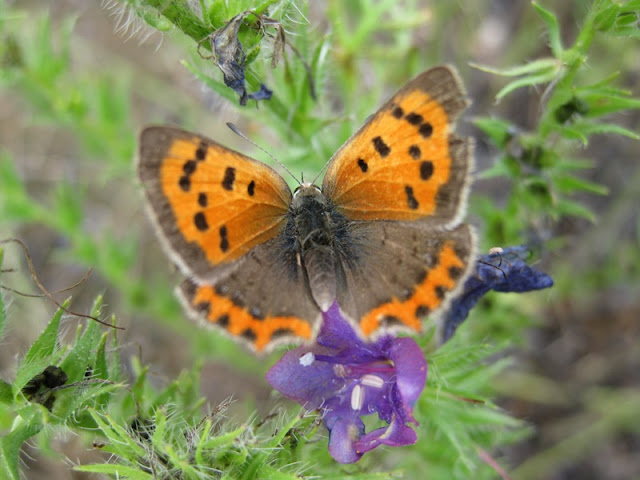 This is a Small Copper, Lycaena phlaeas. 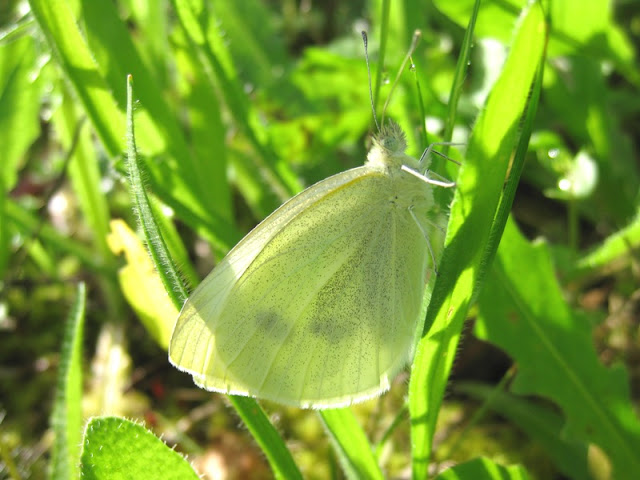 Small Whites, Pieris rapae, seem to occur in most countries I have visited, although they didn't seen to be very common in Portugal. 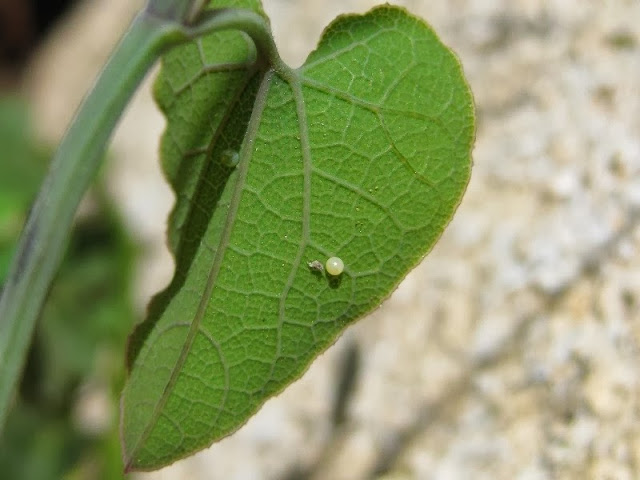 While I was walking along the road a Spanish Festoon, Zerynthia rumina, caught my eye behaving strangely. It turned out to be laying eggs on the underside of the leaves of some plants. Her is an egg. 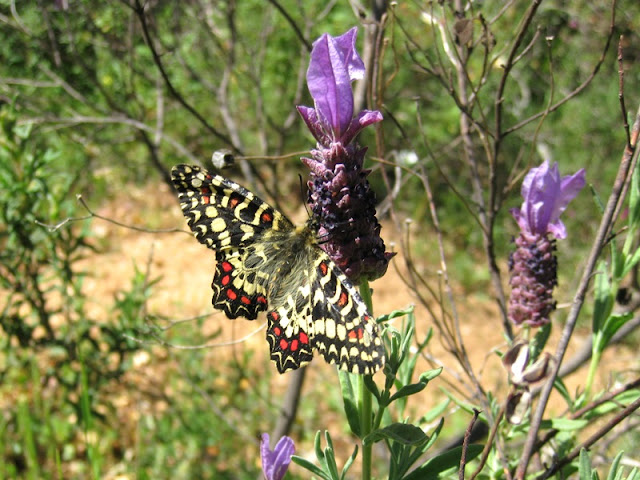 And here is an adult Spanish Festoon. 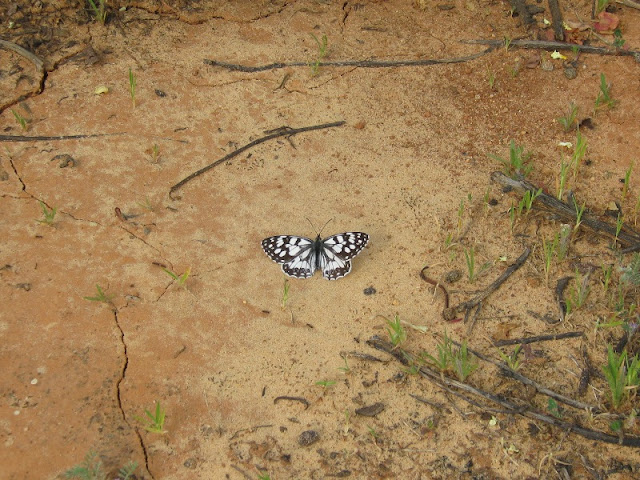 I stalked this Spanish Marbled White, Melanargia ines, for ages, but just couldn't get close to it. This was the best picture I could manage! 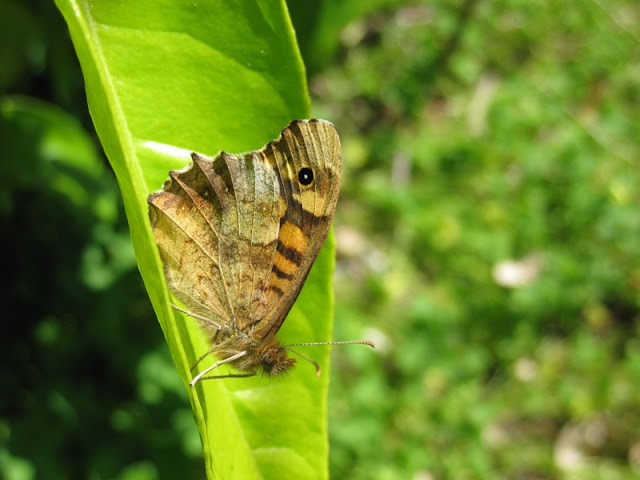 In contrast the Speckled Woods, Pararge aegeria, were very obliging. 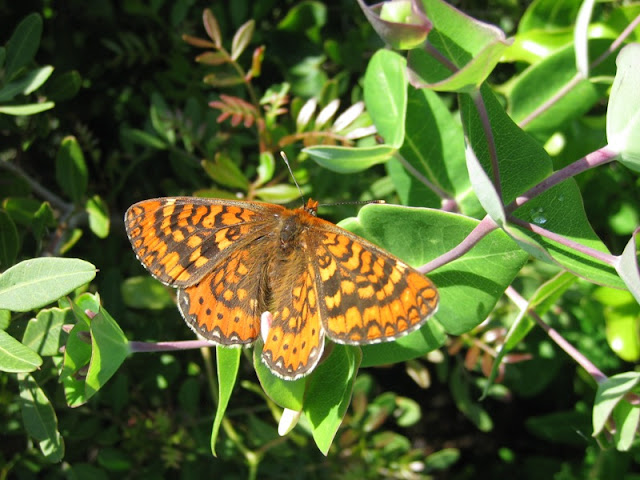 We had to move along the coast for the last few days of our holiday to a more rural area, but strangely to where there were fewer butterflies. However, the area seemed to be a hot spot for Marsh Fritillaries, Euphydryas aurinia.

A total of 24 species during the trip.