We went to Lanzarote, in the Canary Islands, for two weeks' family holiday in July 2011. I have to admit that I wasn't expecting too much of the place, as I had been told that it was very dry and hot. Sure enough when we arrived I thought that we had flown to the moon. Much of the island is still just bare lava fields after a series of volcanic eruptions in the 1730s and a later eruption in 1824. 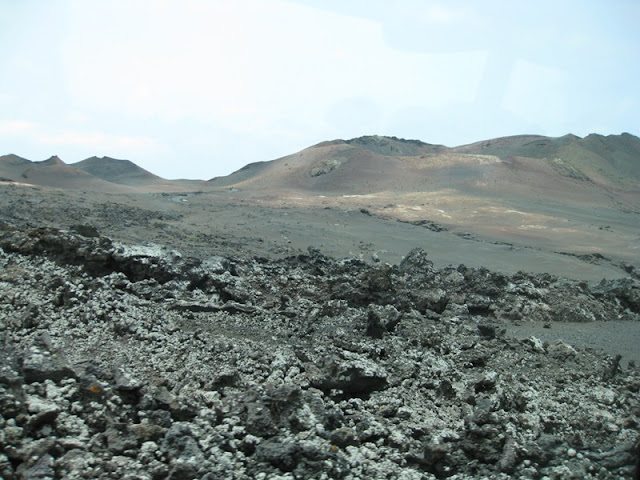 It is amazing, though, when you walk across these lava fields and look more closely, there is a surprising amount of life trying to colonise little crevices and hollows. Many of the rocks are covered in lichen and small succulent plants are finding nutrients and moisture in shaded corners. 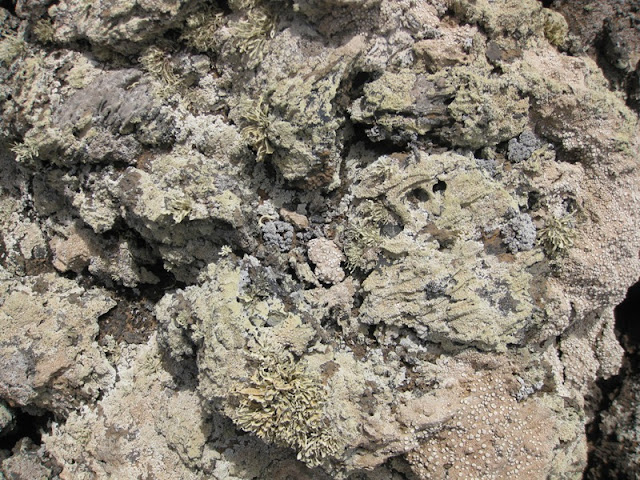 What I found even more amazing was that people were managing to make a living out of growing vines and other crops in this desolate environment. I am told that many of the areas have a good display of wild flowers in the spring. Some areas to the north of the island have more plants growing amongst the sharp larva rock. 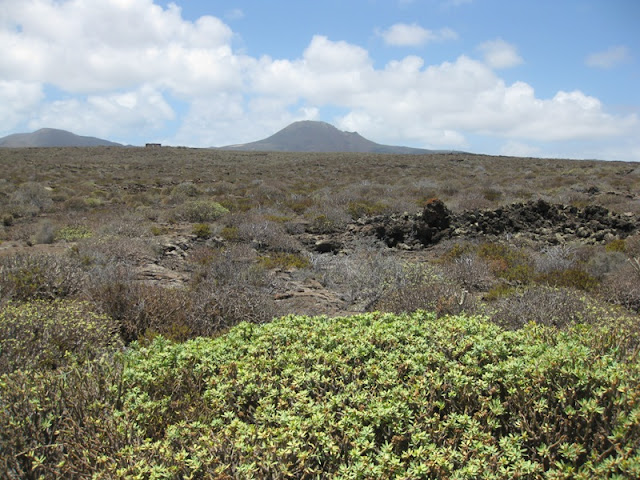 I wasn't expecting to see much in the way of butterflies. Only 16 species have been recorded there and I imagine that the spring would be a better time to visit.

A butterfly that I was hoping to see in Spain was the African Grass Blue, Zizeeria knysna, but unfortunately I didn't see it there. It also occurs in Lanzarote and one day a little grey butterfly flew across a promenade I was walking along, briefly landed on a rock and then flew off. I saw it long enough to recognise it as an African Grass Blue. I was delighted to see it, but disappointed that I didn't get a photograph. A few days later I saw another one on a weed at the side of the pavement outside the resort we were staying at and this time I did manage to get a photograph. 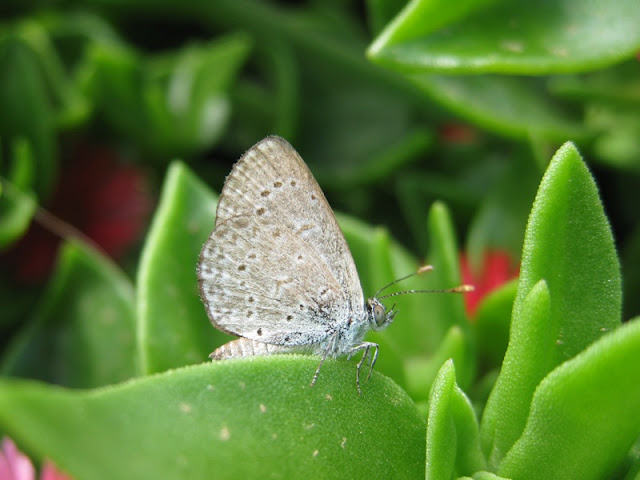 The next day, I noticed that there were two or three of them in a small flower bed close by. 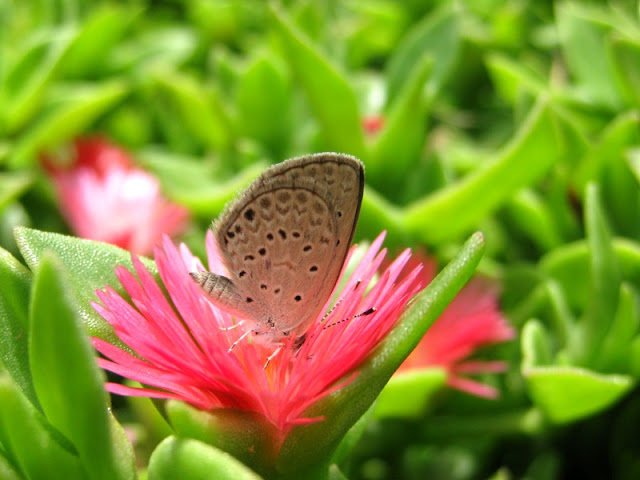 There was one Plumbago bush in the grounds of the resort, where I saw a Lang's Short-tailed Blue, Leptotes pirithous. It was regularly in this same shrub, but I suppose that there wasn't much choice for it! It also seemed smaller than those that I had seen in Spain in the past. 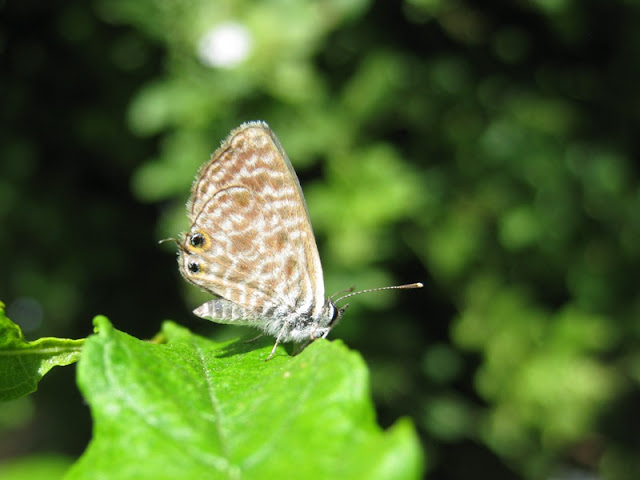 Next to the pool a regular visitor to the Lantana plants was a Monarch butterfly, Danaus plexippus. It was amazing how it turned up regularly and patrolled the shrub bed for most of each day. 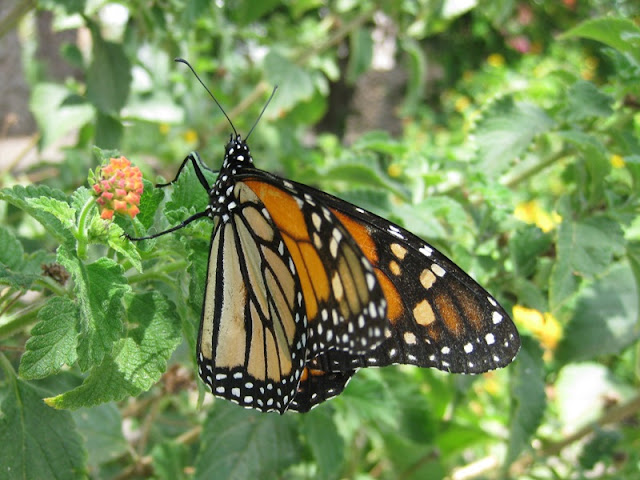 Strangely what I assume was the same individual turned up day after day, but it was always alone. It didn't turn up on the second last day of our holiday and on the last day I saw a smaller, paler Monarch on the shrubs. I hope that they managed to meet up at some point!

This little butterfly had me confused and it still does! Initially I thought I saw a Brown Argus land in a bush outside our bungalow. I took a quick picture and then noticed that it had the under-wing markings of a Common Blue, Polyommatus icarus. That made more sense, as the Brown Argus isn't meant to occur there. The upper wings were brown, which is what confused me, but that is common for a female Common Blue. However, I have since read on the excellent UK Butterflies Forum that the Canary populations of the Common Blue are in fact Polyommatus celina. I'm not doubting the words of wisdom on that web site, but to add further confusion the female celina is said to have a lot of blue on its upper wings and this butterfly was definitely brown! Apologies for the poor picture - it was all I could manage. 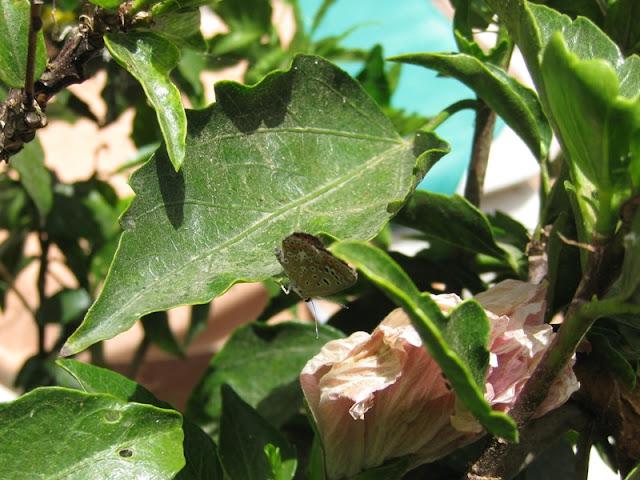 The other butterflies I saw were:
Small White, Pieris rapae, on waste ground next to the resort.
Geranium Bronze, Cacyreus marshalli, on a pot of geraniums in the resort.
Red Admiral, Vanessa atalanta, which flew over the resort we were staying at.
7 species in total, which was quite amazing considering the arid environment on the island. However, I only saw them at, or close to, the resort where there were plants in flower.
Posted by Nick Morgan at 00:03