The weather in 2016 was very similar to the previous year. I hope this isn't going to become the norm! The winter of 2015/16 was reasonably mild again, with only one dusting of snow. We had very heavy rain in February causing localised flooding, but the rest of the year was reasonably dry. Sadly, it was also quite cool and cloudy with below average sunshine.


One unusual aspect of the weather in 2016 was the number of easterly winds we had and this seemed to bring cloud with it.

We had very local torrential rain in June which washed away the caterpillars I had been nurturing in my garden. I suspect it may have had a similar impact across much of East Lothian impacting on the butterfly numbers later in the year.


Despite this I still received almost as many butterfly records this year as I did last year. The combined efforts of everyone recording butterflies has built up a very good picture of what is going on in East Lothian. 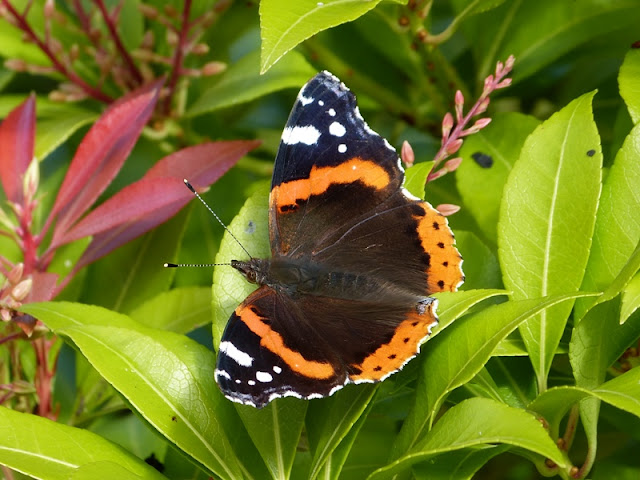 The first butterfly seen in East Lothian in 2016 was a Red Admiral on 3 February and interestingly the last record I received of a butterfly flying was also a Red Admiral on 16 November. In between they were regularly seen with numbers peaking in August. The early sightings over the last few years would indicate that Red Admirals have been able to survive the last few mild winters we have had. 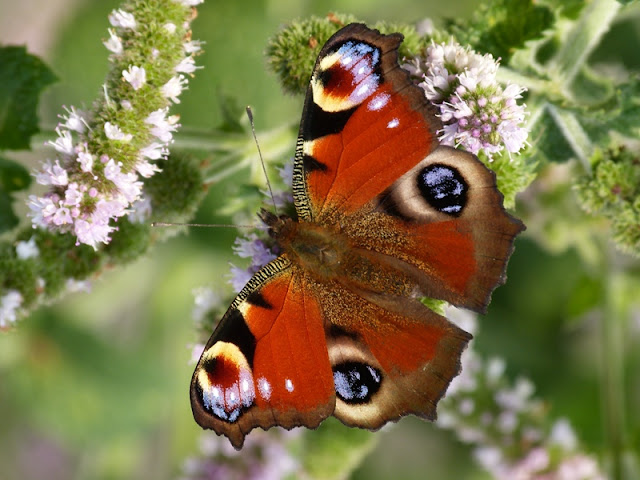 The first record in 2016 was on 13 March and Peacocks were regularly seen until early June. Although the numbers in the summer months were lower than we normally see, they continued to be seen flying until 4 November. 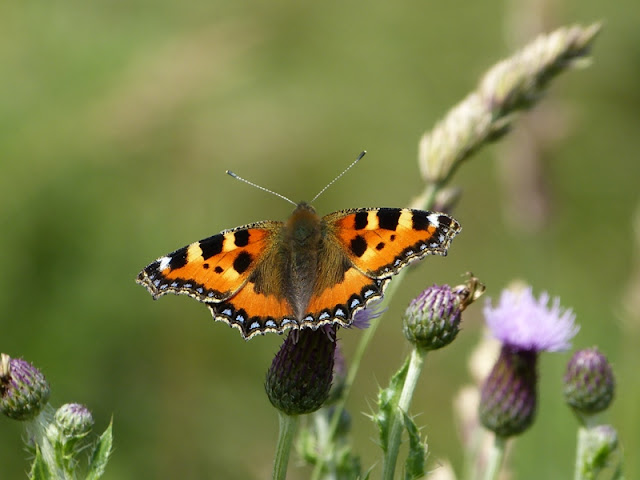 Small Tortoiseshells were seen regularly from 14 March until the middle of July as expected, but when we would normally expect to see an increase in numbers in late summer and autumn, numbers were disappointingly low. This corresponds with the national story and I can only imagine that the cool summer weather caused a lot of caterpillars to perish. I notice that the records where more than one Tortoiseshell was recorded were all on the coast. We are finding a few Small Tortoiseshells hibernating in the usual sites, although fewer than normal, but hopefully enough to boost the population again this year. 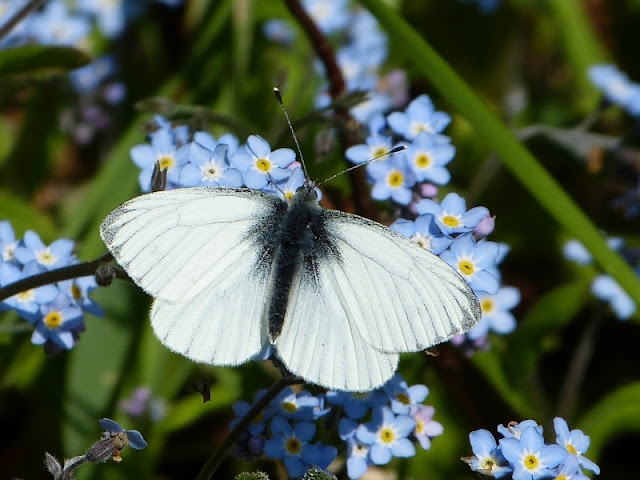 The first record was on 14th April and they were seen through to the 27th September. The spring brood were as numerous as normal, but they weren’t seen in anything like the normal numbers during the summer generation. However, when I check the numbers recorded on the transect the summer numbers were better. 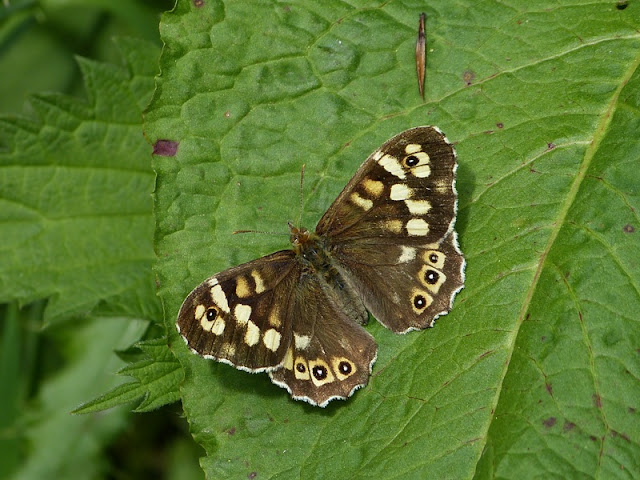 Speckled Woods continued to do well in East Lothian in 2016. The first record I received was on 19 April and they were very regularly recorded with no apparent break between the three generations until 31 October. The peak numbers appeared in August, which is different from previous years, when the numbers were highest in September. The Speckled Wood has spread west and south, meaning that it is now found in most suitable habitats in East Lothian. 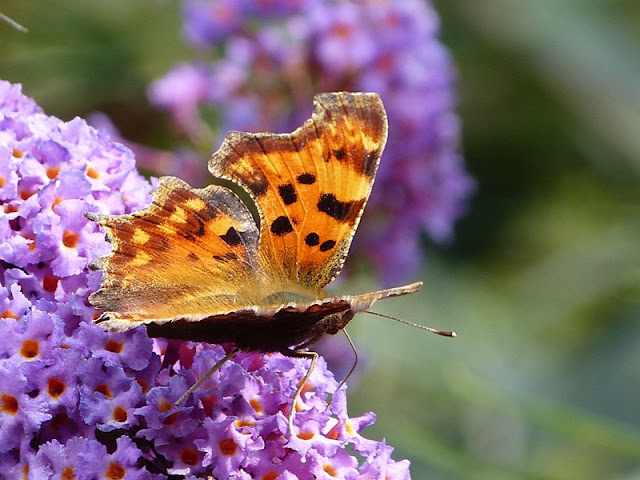 Commas were first seen on 19 April in three different locations! There were only 19 records for the whole year, which is considerably down on 2014 and 2015. This is a butterfly that had been building up in numbers since it first was recorded here about 15 years ago, but it certainly didn't seem to do well in 2016. 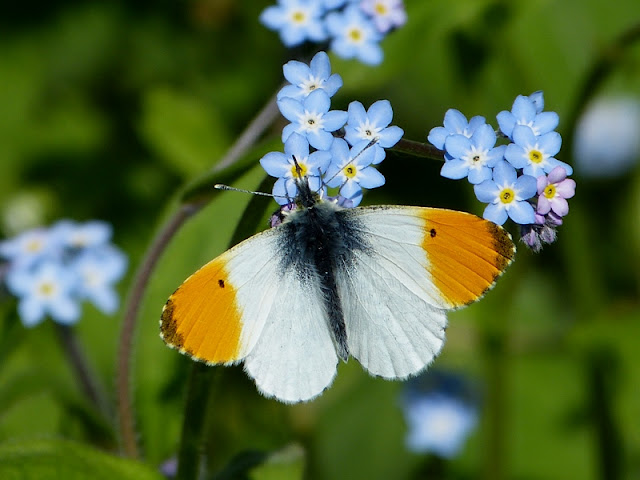 The first Orange Tip was recorded on 19 April and they were seen in good numbers through to 26 June. Being an early species, they were unaffected by the poor summer weather, but let’s hope that there isn’t an impact on the 2017 population. The first Small White was recorded on 19 April. It was interesting that I received more Small White records in 2016 than in previous years, but with smaller numbers in each record. There was a fairly clear division between the first generation – April to mid-June and the second generation from mid-July to 23 September. 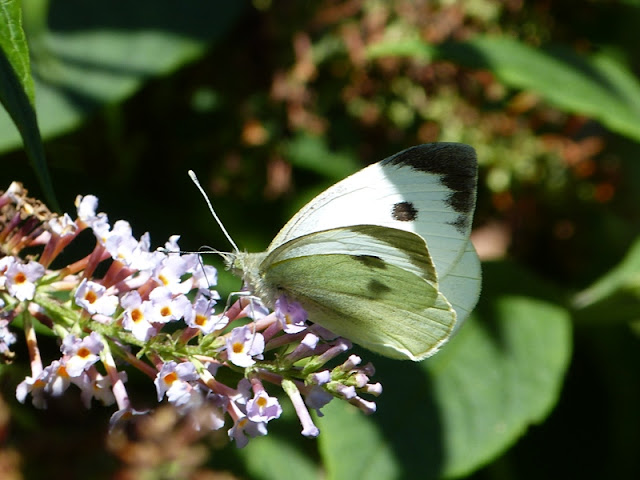 The first Large Whites were recorded on a transect in early April. They were recorded until 10 September in better numbers than normal. I can't imagine why they did so well in 2016. I remember them laying eggs very late in 2015 and I didn't think the caterpillars stood a chance of surviving the early frosts. It seems they can! 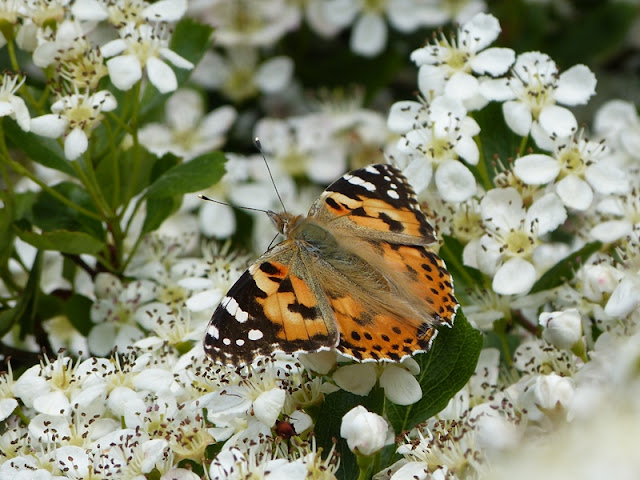 2016 was a “Painted Lady year”. These remarkable butterflies arrived here in early May and were recorded in good numbers right through to 4th November. Thereafter they hopefully made it back to Africa, from where their great grandparents would have set out back in March. 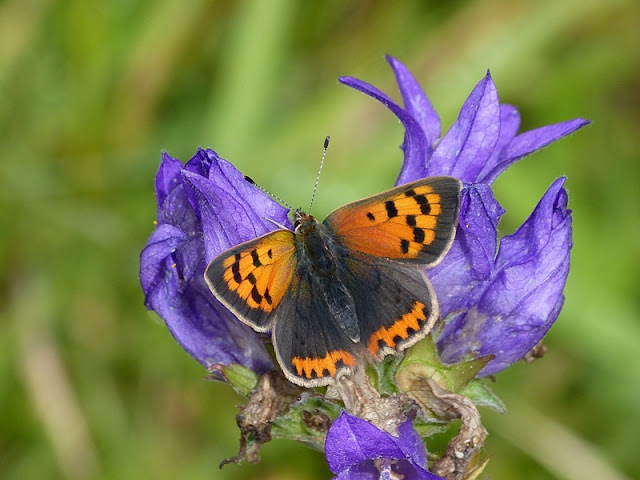 The first record of a Small Copper was on 6 May and they were recorded very regularly until 13 September. Nationally, the Small Copper didn’t do well last year, but in East Lothian they seemed to buck the trend a bit. The second generation of the year wasn't as numerous as the spring generation. We never see great numbers of them, but in 2016 I received more records than in previous years. 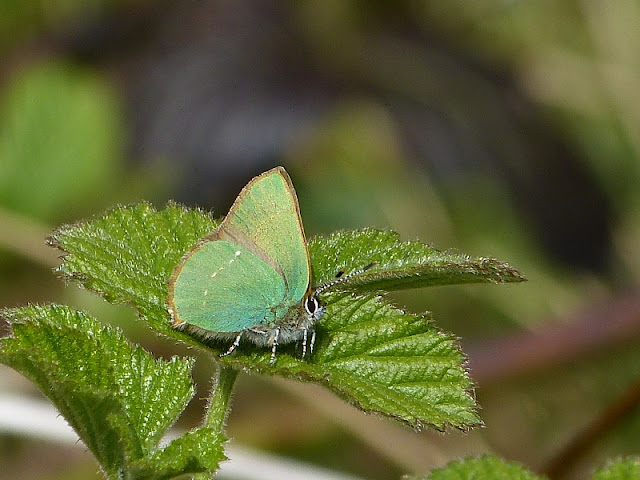 The first Green Hairstreak record was on 19 May and they were seen through to 6 June in three different areas of woodland north of the Lammermuir Hills. They haven't previously been recorded at two of these sites. Interestingly there were no records from the more remote and difficult to reach areas of the Lammermuirs, possibly because no one made the effort to search those areas.

I will continue with the rest of the butterflies seen in East Lothian in 2016 in my next post.
Posted by Nick Morgan at 17:33 13 comments:

By now it was really time to be heading back to the villa, but I had three quick stops I wanted to make on my way back down the mountain. The first was at a viewpoint I had found two years ago. This is at about 2100 metres above sea level and the last time I was there I saw several Swallowtails hill topping.

I thought that the first butterfly I saw there was a very worn Blue-spot Hairstreak, but when I was looking at my pictures later I realised it was a False Ilex Hairstreak, Satyrium esculi. 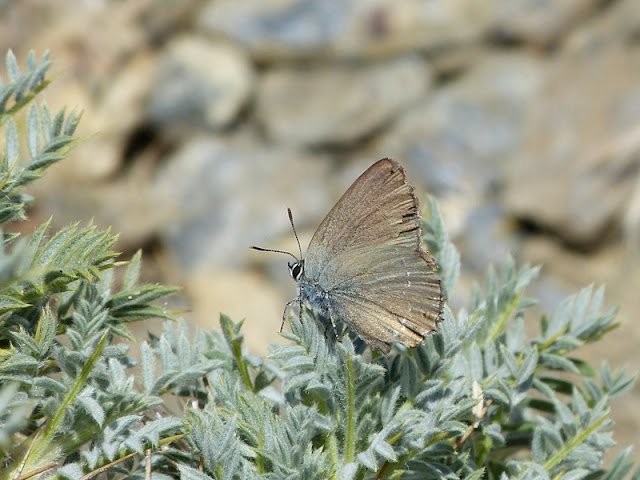 When compared to the Blue-spot Hairstreaks, Satyrium spini, you can see the subtle difference in the white line on their wings. 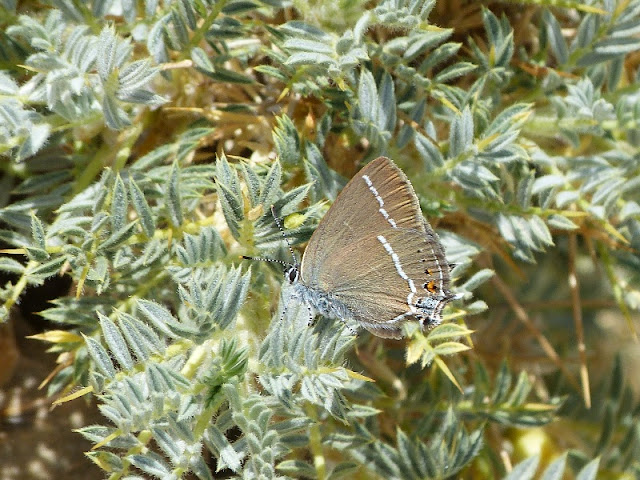 In contrast to my last visit, I only saw one Swallowtail, Papilio machaon, this year and it was very ragged. There was also just the one Spanish Swallowtail, Iphiclides feisthamelii, in slightly better condition, but it had still lost its tails! 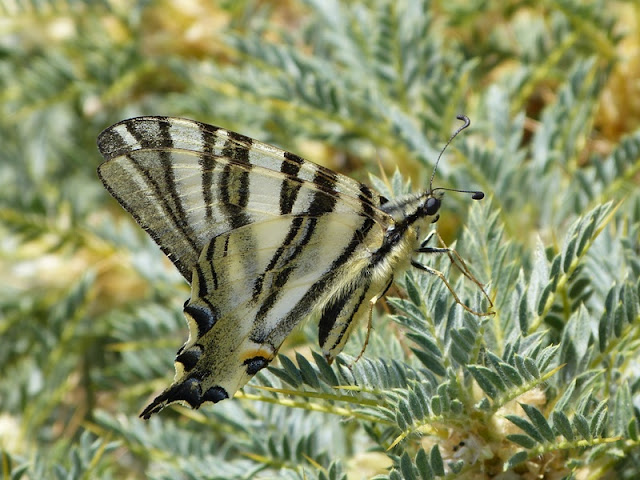 As with my previous visit there were a lot of Wall Browns squabbling over their territories, but I didn't spot any Large Wall Browns this year. I did see a Clouded Yellow, Colias crocea, which I haven't seen before in that location. 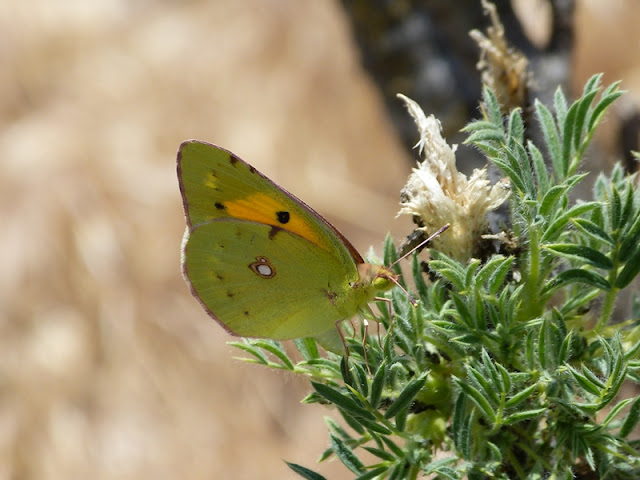 I jumped back in the car and drove down another 100 metres to the spot that Mike Prentice had suggested. There were a lot more butterflies there now than there had been at 9am.

I saw two Graylings, Hipparchia semele, one much lighter than the other. I spent ages checking my photographs to see if either of them were Nevada Graylings, but they both turned out to just be standard Graylings! 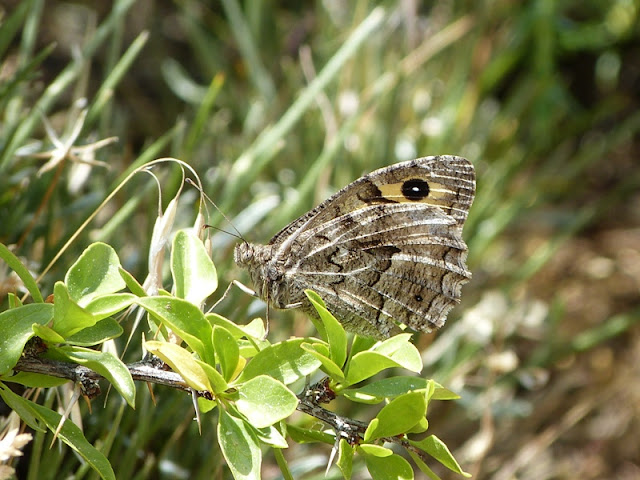 There were so many different butterflies flying amongst the vegetation there, including Long-tailed Blues, Spotted Fritillaries and Common Blues. They were very active in the afternoon heat, so many of them didn't stop for a picture! I managed to catch a shot of this Queen of Spain Fritillary, Issoria lathonia. 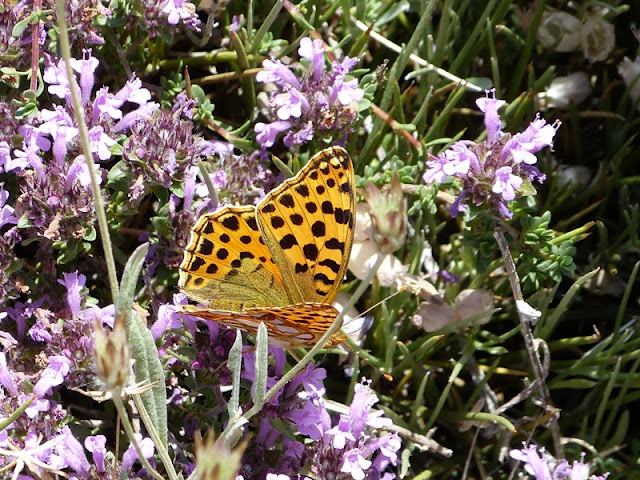 And I think this is a Large Grizzled Skipper, Pyrgus alveus. I have to admit that I find it very difficult to differentiate between many of the skippers. 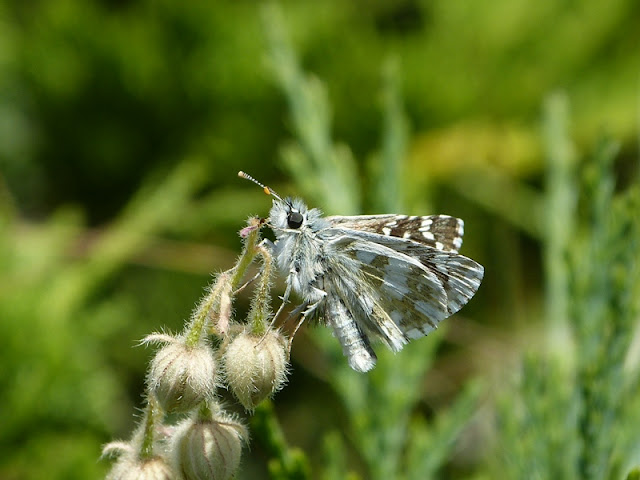 Other butterflies there included Silver-studded Blues, Marbled Whites, Great Banded Grayling, Blue-spot Hairstreak and Southern Brown Argus. However, I didn't have long to watch them on my whistle-stop descent!

My final stop of the day was a little further down the mountain at about 1800 metres above sea level. This is a little scrubby area next to some Pine trees that I discovered two years ago. As then, I certainly wasn't disappointed with the butterflies I saw there.

Strangely, exactly as on my visit two years ago, the first butterfly I saw was a Marsh Fritillary, Euphydryas aurinia beckeri. Just the one next to where I parked the car. 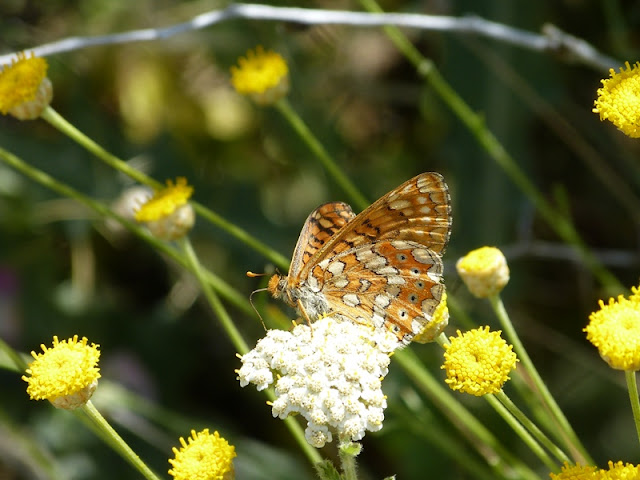 The place was awash with butterflies, including Southern Brown Argus, Aricia cramera; 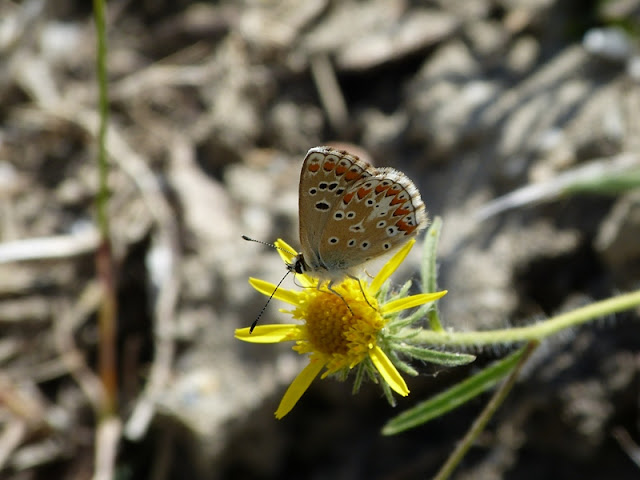 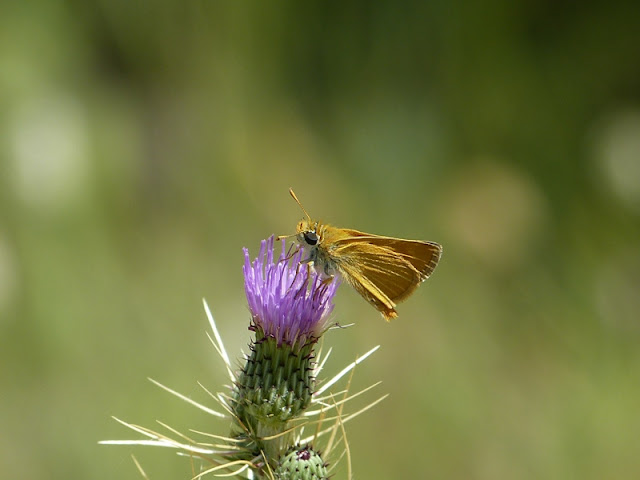 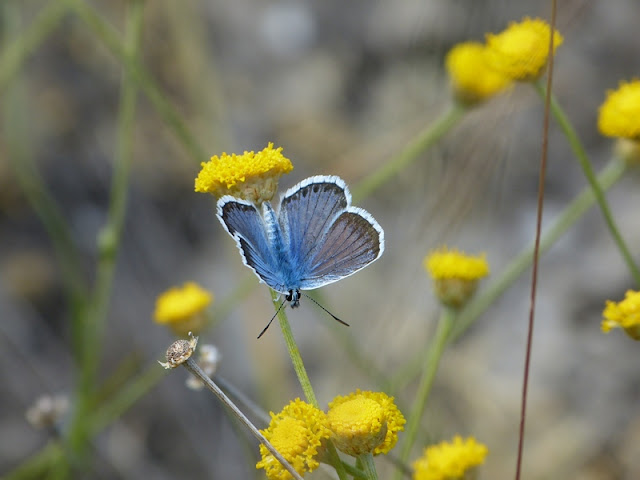 And I think this is a female Idas Blue, Plebejus idas nevadensis. 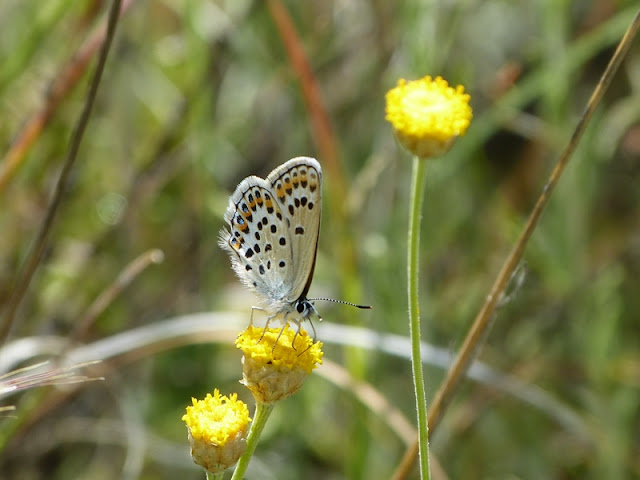 There were also Large Whites, Small Whites, Common Blues, Purple-shot Coppers, Cleopatras, a Rock Grayling and an Oriental Meadow Brown. Just like the last time, I saw one Black-veined White, Aporia crataegi, but this year it was kind enough to allow me to take a picture! 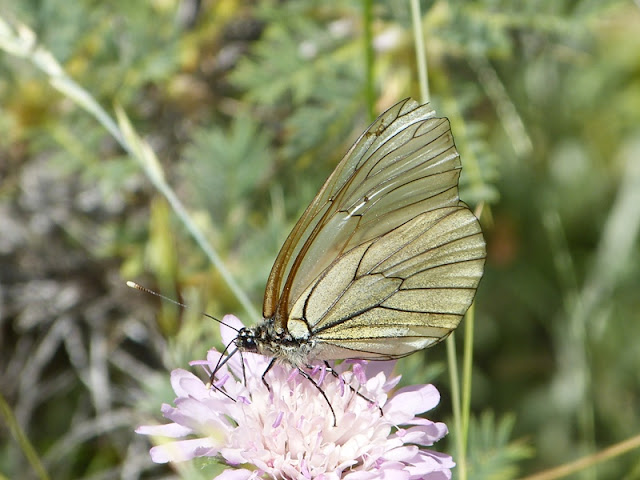 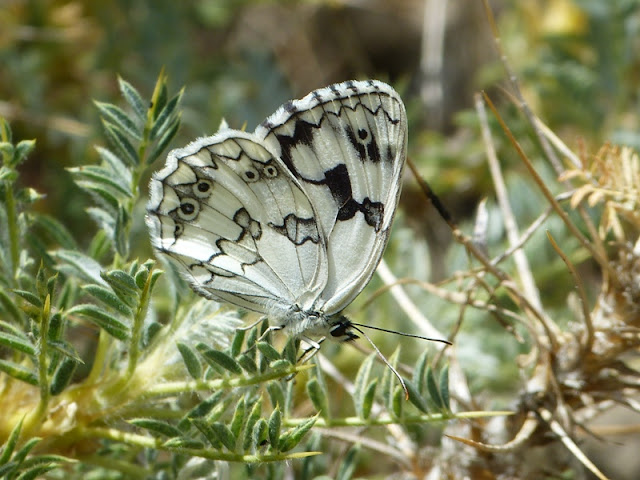 All too soon I had to drag myself back to the car. I had had an amazing few hours in the Sierra Nevada seeing 42 different species of butterflies, with several of them being species I hadn't seen before. It was certainly worth the three hour drive each way to get there.
Posted by Nick Morgan at 11:18 10 comments: