The start of the butterfly season

I chose a good week to take off work last week! The weather was sunny and although not particularly warm, it was enough to tempt a few butterflies out of hibernation and cause a few others to venture out of their chrysalises! I made the most of the weather and took the dogs out for walks several times each day as an excuse to look for butterflies!
Quite a number of the hedges around the fields here are Blackthorn, Prunus spinosa. They have white flowers at this time of year, but I have never seen them flower so profusely. 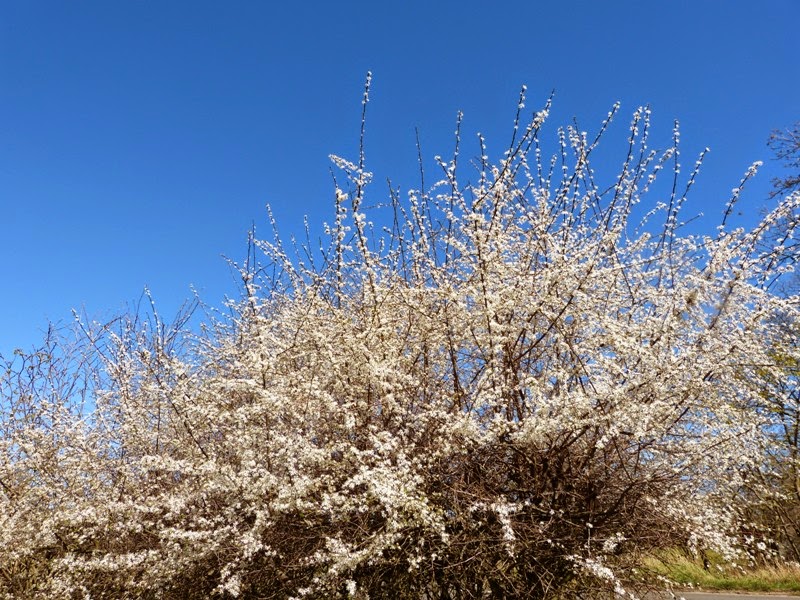 The black berries are used to flavour Sloe Gin, so it looks like we should have a good crop later in the year!
The Cherry trees are also flowering well this year. 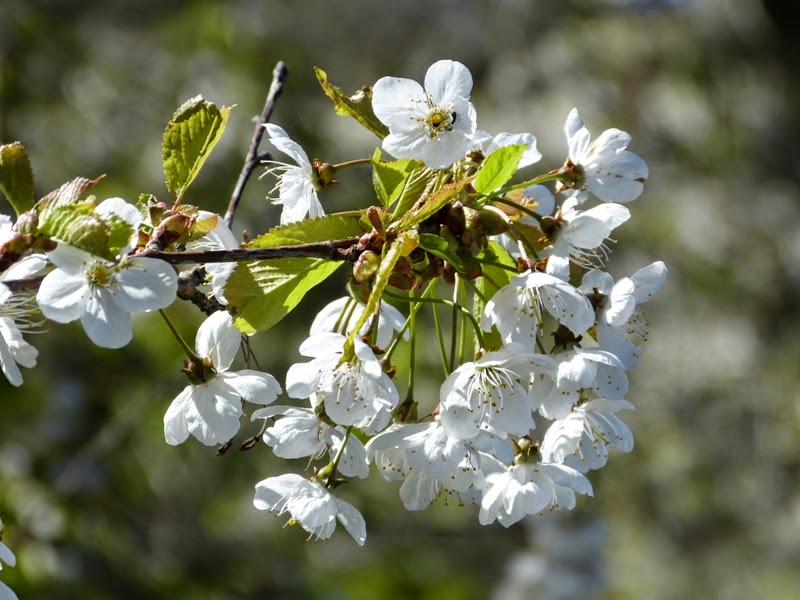 Spring wouldn't be spring without Primroses, Primula vulgaris. They have been flowering for a few weeks now, so are a little past their best. 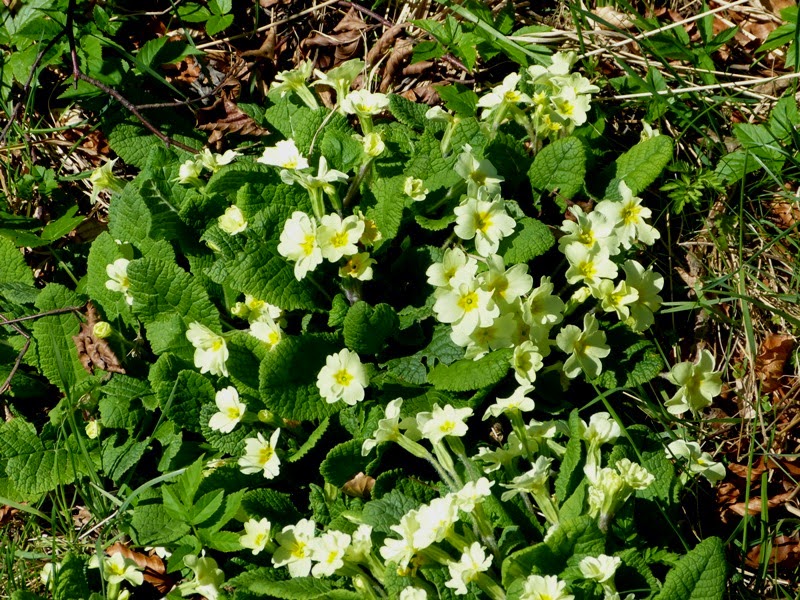 I came across a fair bit of wildlife while I was out and about. Brown Hares are not as common as they were a few years ago, but I bumped into quite a few last week. Luckily they spotted us before the dogs spotted them and they slipped off safely. I was very surprised to come almost face to face with a Fox on a local shooting estate. This was the first Fox I have seen around here, as they have been almost eradicated to protect the Pheasants. This Roe Deer was one of a group of four I spotted while looking for butterflies. They didn't see me for quite some time, but I think this one heard my camera and they ran off shortly after I took the picture! 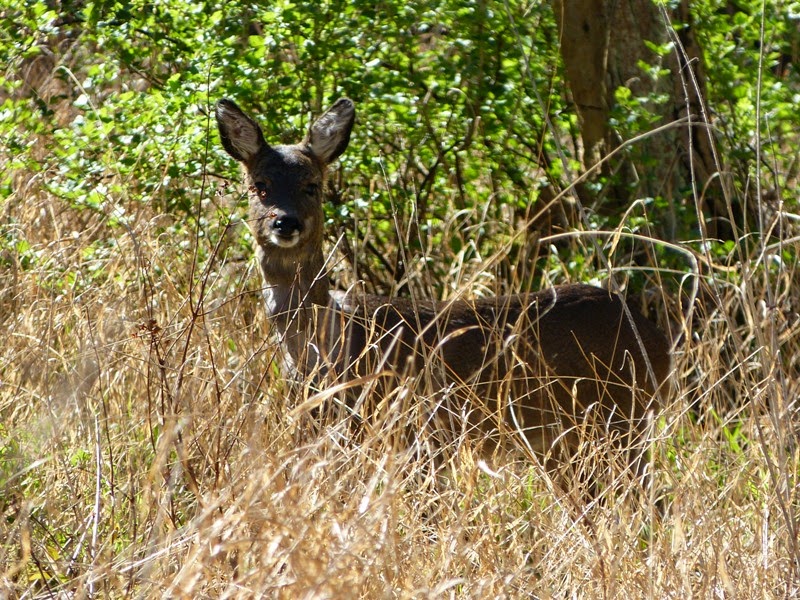 The flowers are alive with insects.  This lovely Carder Bumblebee, Bombus pascuorum, was on a Cuckoo Flower, Cardamine pratensis, in a meadow near where we live. 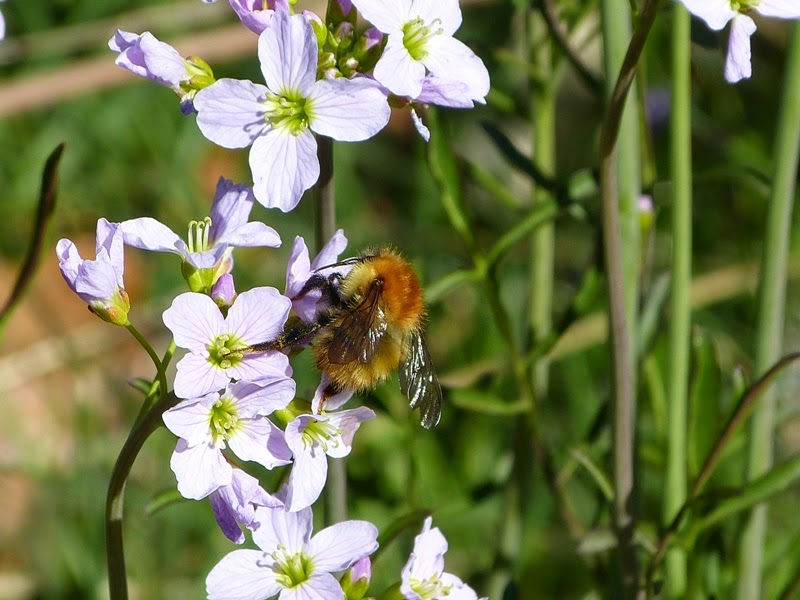 The three usual butterflies were all out in force. The Peacock, Aglais io, the Small Tortoiseshell, Aglais urticae, and the Comma, Polygonia c-album, all over-winter as adults, hibernating in wood piles, hollow trees and in sheds. They start to appear in March on warm days and by April they are regularly seen.

My favourite local butterfly is the Orange Tip, Anthocharis cardamines. Not only do I love their colours, but for me they signify the start of the butterfly season. As with the other three white species found here, they spend the winter as a chrysalis. However, unlike the other three species of whites, they only have one generation a year, so are only seen for about six weeks. 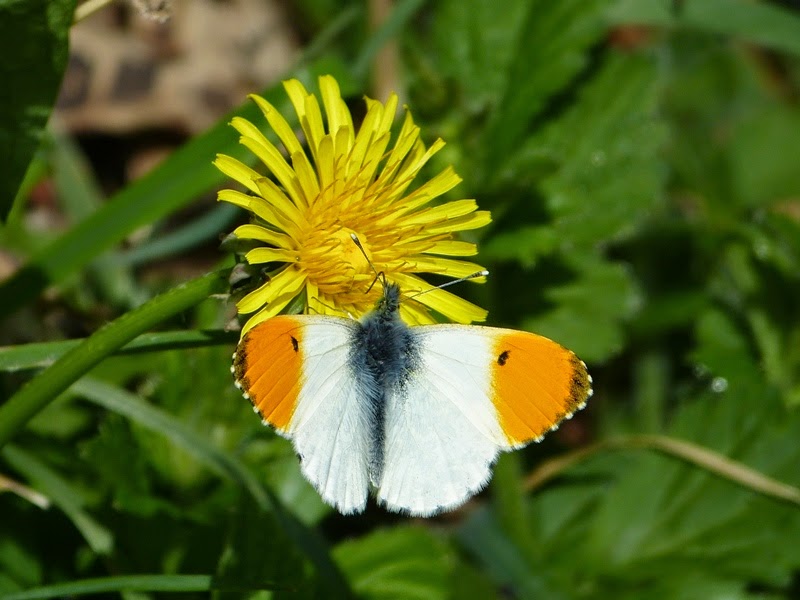 I have real problems getting good pictures of them, and I am never satisfied. They are very fickle and will only fly or open their wings when the sun is shining. The white areas on their wings reflect the sunlight causing quite a glare. Almost as soon as the sun goes behind a cloud, they will close their wings. I have found that the best option is to find one feeding and wait for the sun to go behind a cloud, and quickly get a picture before they close their wings! This isn't easy as the males tend to fly up and down paths and river banks looking for females. 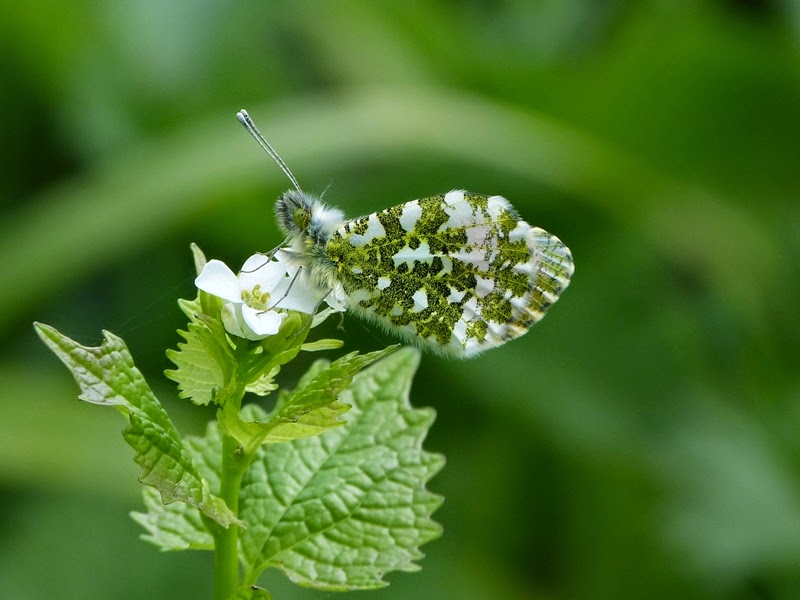 When their wings are closed they are very well camouflaged. 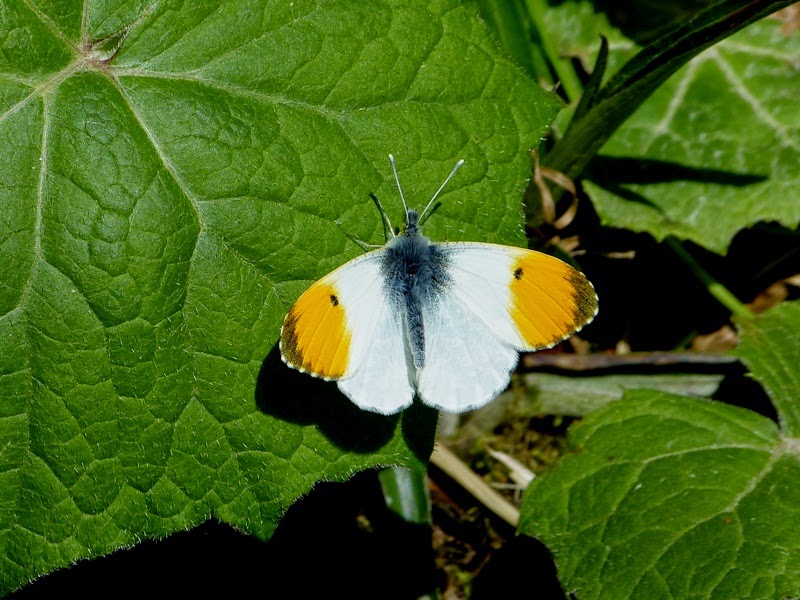 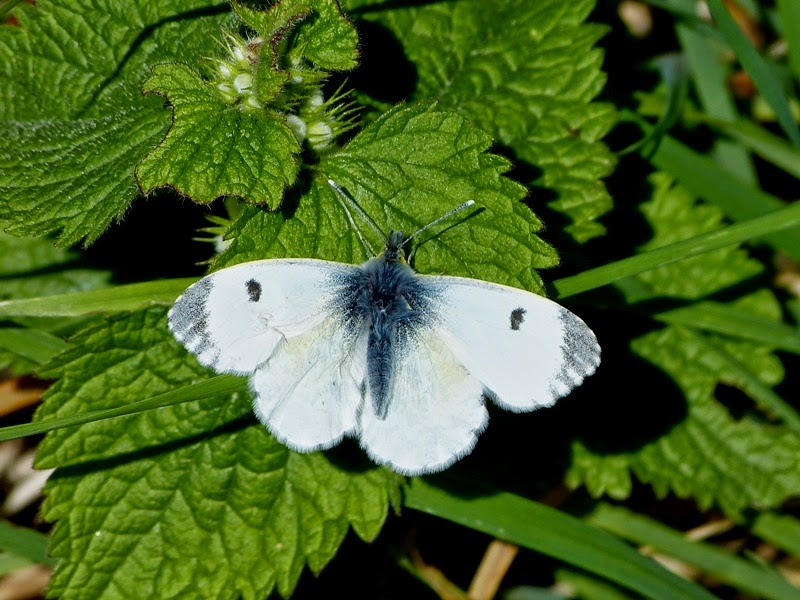 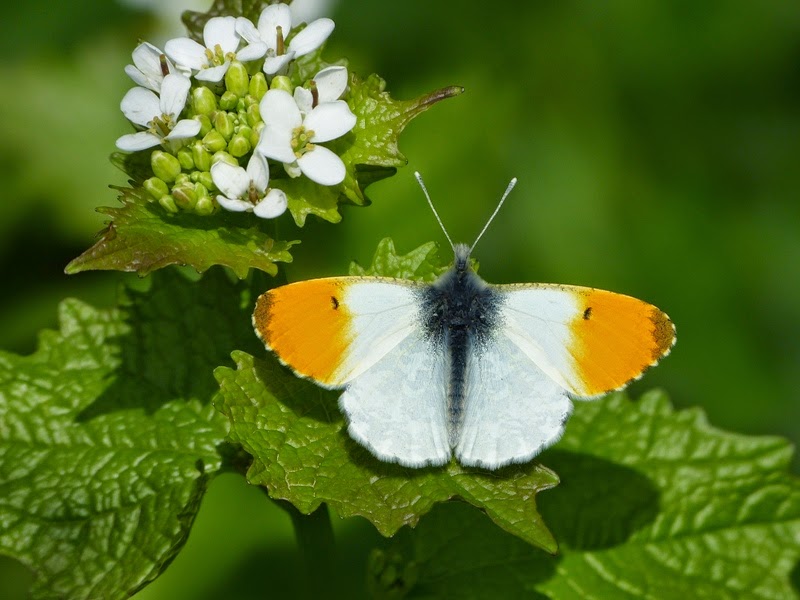 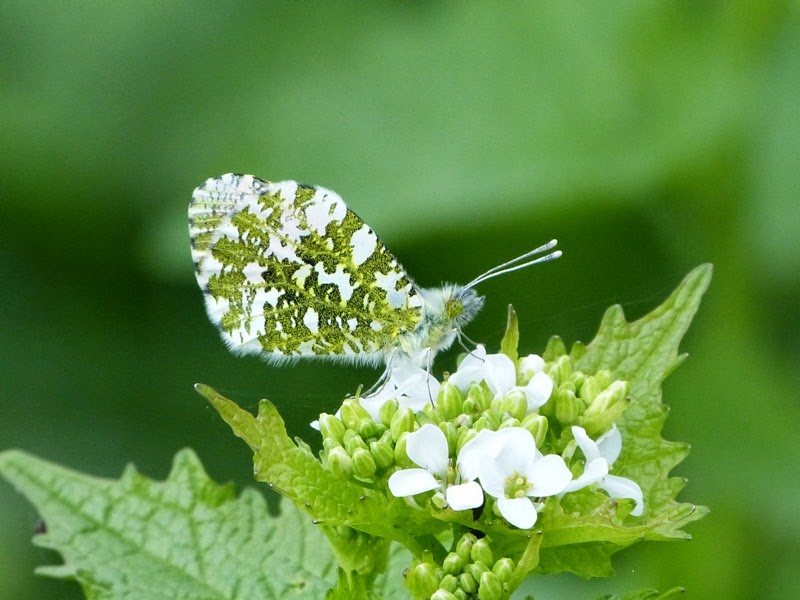 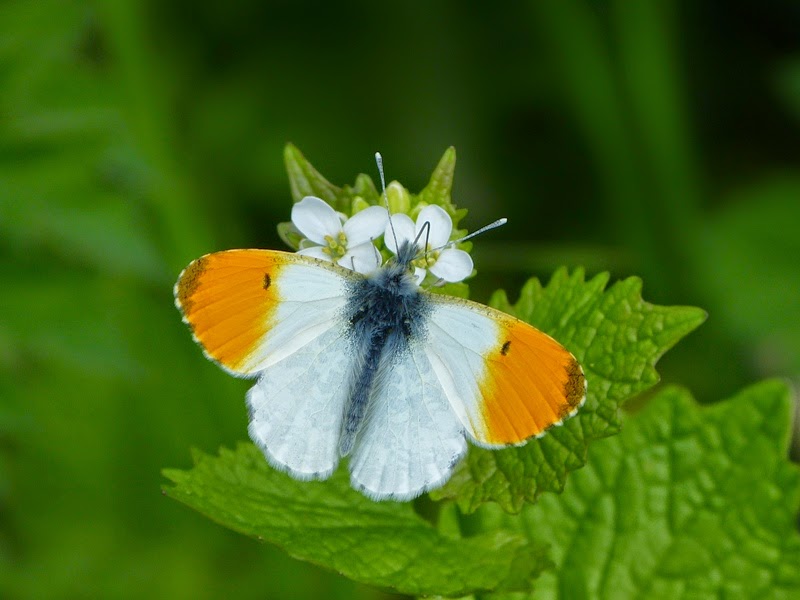 I am sorry to have put on so many pictures, but I can't resist these butterflies!
This week the weather has returned to grey and cloudy, so unusually I took my leave on the right week!

All the right signs

The weather here has been a little disappointing recently. Nothing unusual, but I am always impatient at this time of year, because as soon as it warms up I know we will see more butterflies.
The Butterfly Transect Surveys are meant to start the first week of April, but we haven't had good enough weather here yet to make a start. Today I walked my transect route, just in case there were any butterflies there, but I didn't hold out any hope as it was quite cloudy and there was a cold wind at lunch time when I could get out of the office to do it.
Things started off reasonably well with bumble bees feeding in the willow trees. I think this one is a Buff-tailed Bumblebee. 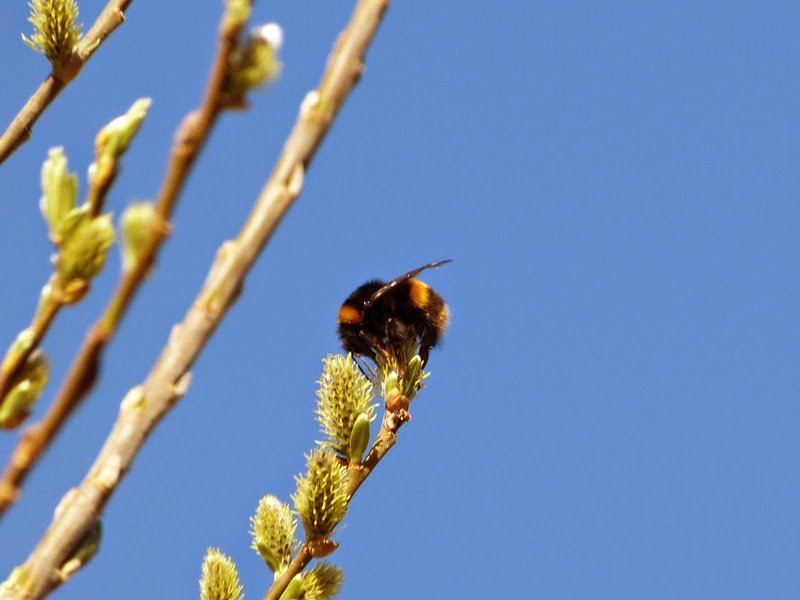 A little later I saw my first Red-tailed Bumblebee of the year. 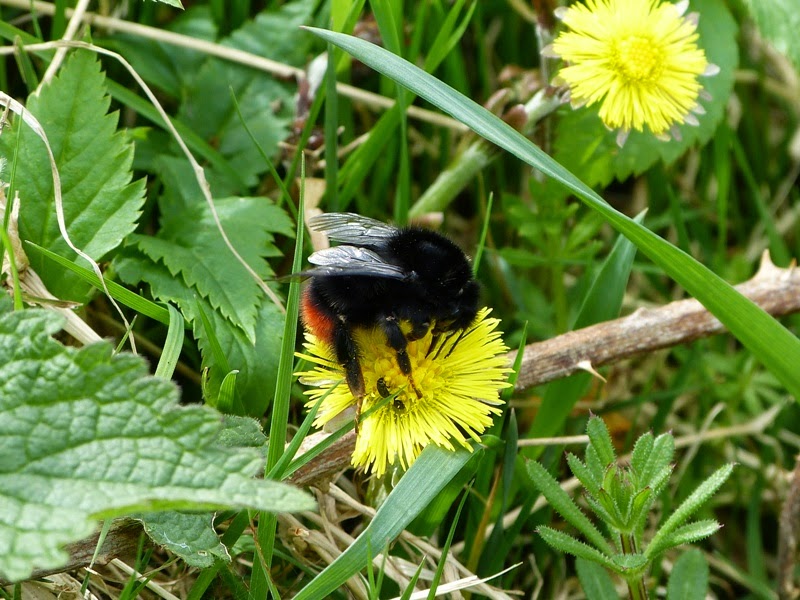 The clouds kept breaking, revealing large blue patches of sky. As I reached the river I saw a flash of blue as a Kingfisher flew past me. A little further upstream a Heron was looking splendid with its plumage blowing in the wind. 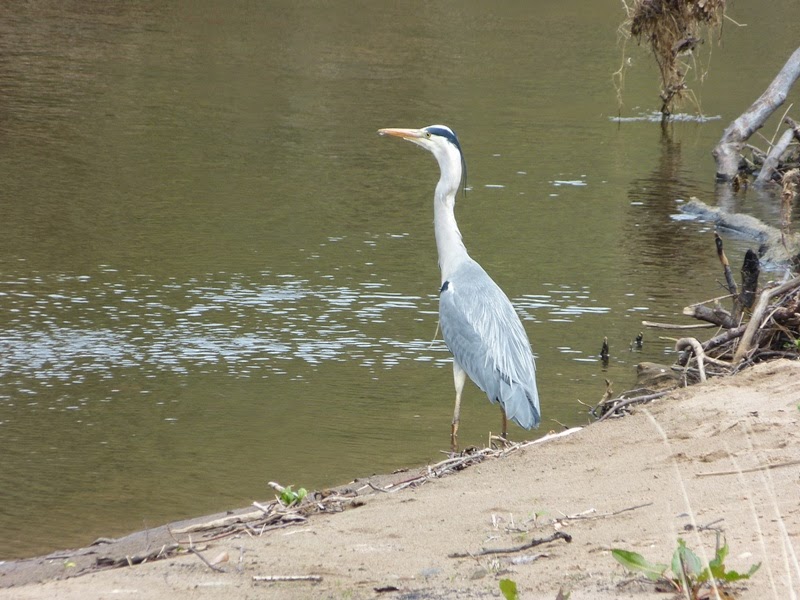 Ladybirds seem to have survived the mild winter in great numbers. The foliage next to the river was littered in them. 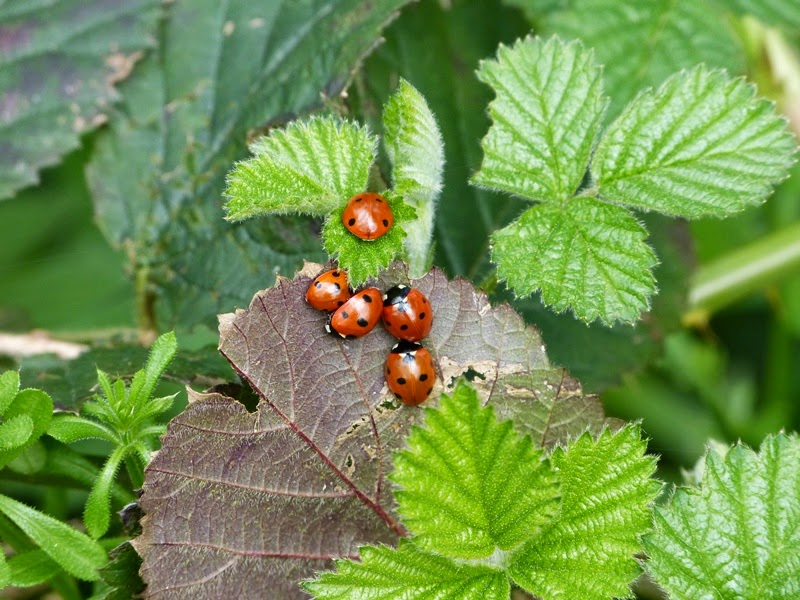 As I climbed the fence into a meadow a Peacock butterfly, Aglais io, flew up in front of me. These butterflies over-winter as adults, hibernating in sheds or log piles.  This one seems to have come through the winter in lovely condition. 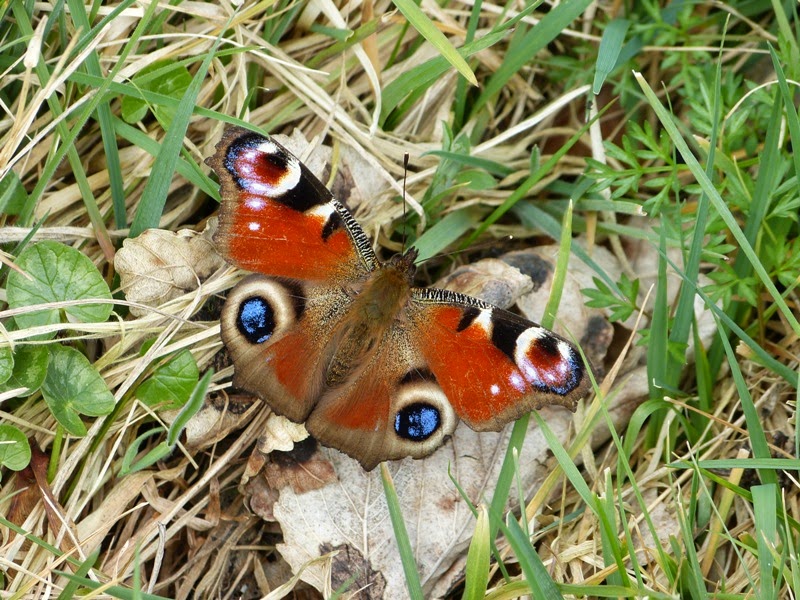 I noticed some Sand Martins flying over the river. They have spent the winter in Africa, but they spend the summer over here, breeding in sandy river banks. Their arrival is always a sign that the weather is about to improve. As I watched them flying low over the river, catching flies, I noticed that there was a Swallow amongst them. It briefly stopped on a dead tree for a rest. 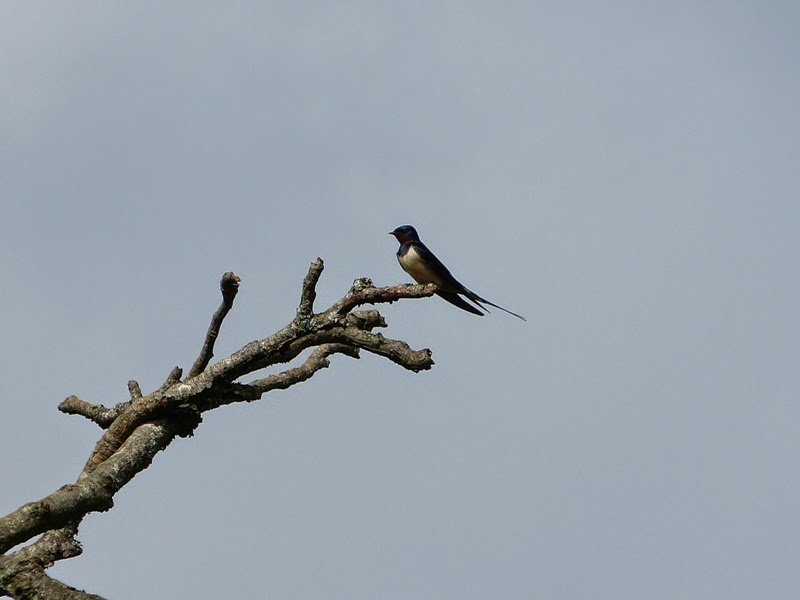 While I was watching them I heard the squawk of a buzzard and I looked up to see it flying overhead. 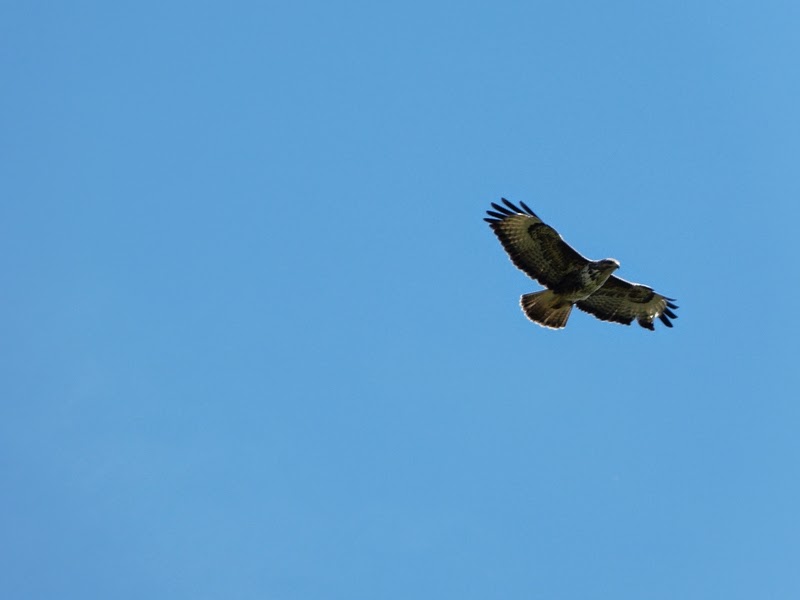 Shortly afterwards some grey clouds blew over and I thought that I had no chance of seeing any more butterflies. However, all the signs are there that the weather is about to improve and I shouldn't have too long to wait.

As it turned out, I only had to wait about ten minutes! On my way back to the office I saw a white butterfly flying along the edge of the meadow. I followed it for a while until it stopped, allowing me to identify it. It was a Green-veined White, Pieris napi. The first one I have seen this year. It would have spent the winter as a chrysalis and probably only emerged today. 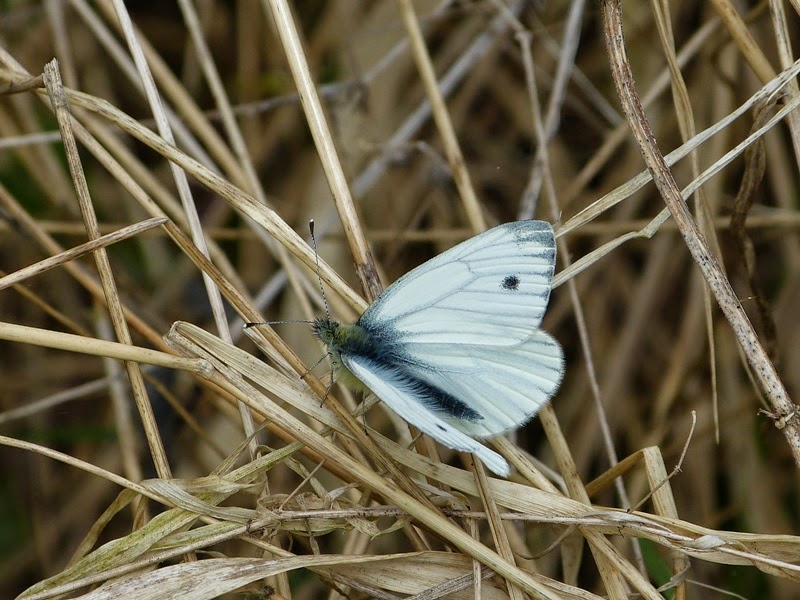 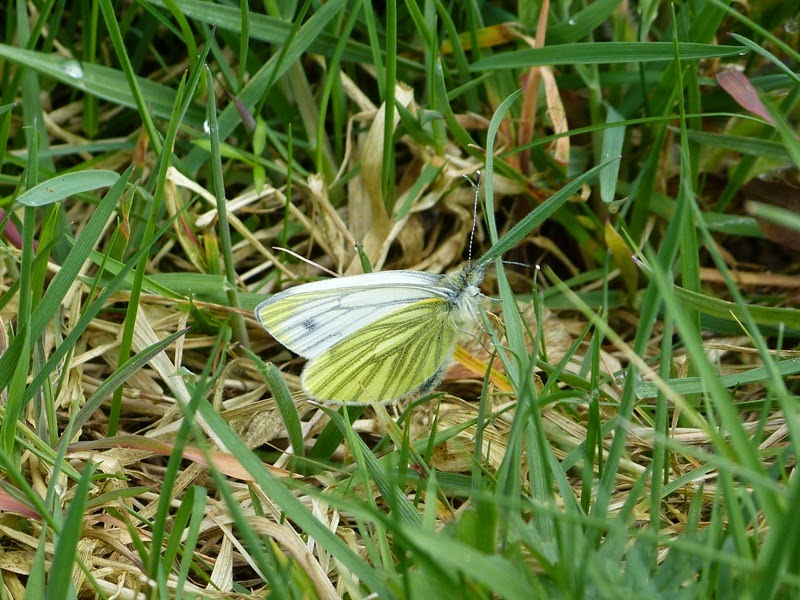 There were plenty of signs that the weather may be about to improve, so I hope it won't be long until I see several more new species of butterflies for the year.
Posted by Nick Morgan at 00:18 16 comments:

I was recently contacted by a moth enthusiast who told me that Butterfly Conservation is undertaking a project to produce an Atlas of moth distribution. They have produced an excellent Butterfly Atlas, which incorporates records from enthusiasts around the UK, and this will follow a similar format. I have therefore been lent this moth trap so that I can help with records from this area. 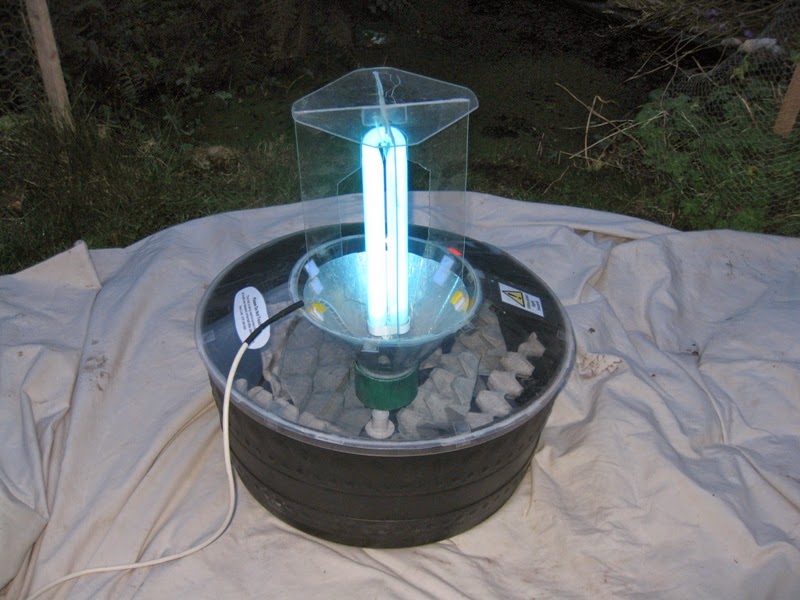 It is an ingenious home-made device. It is left out over-night. The light attracts the moths and then bounce off it and fall through the funnel-shaped lid. Inside the trap are sections of egg crate and the moths settle down for the night amongst them. In the morning it is just a case of lifting off the lid and checking for moths in the egg crates.

I set the trap up last night for the first time. I wasn't very hopeful, as it was only 5.8 degrees, but this morning I could see one moth through the lid. As I checked through the sections of egg crate I found that I had caught nine moths. They were all Hebrew Characters, Orthosia gothica. 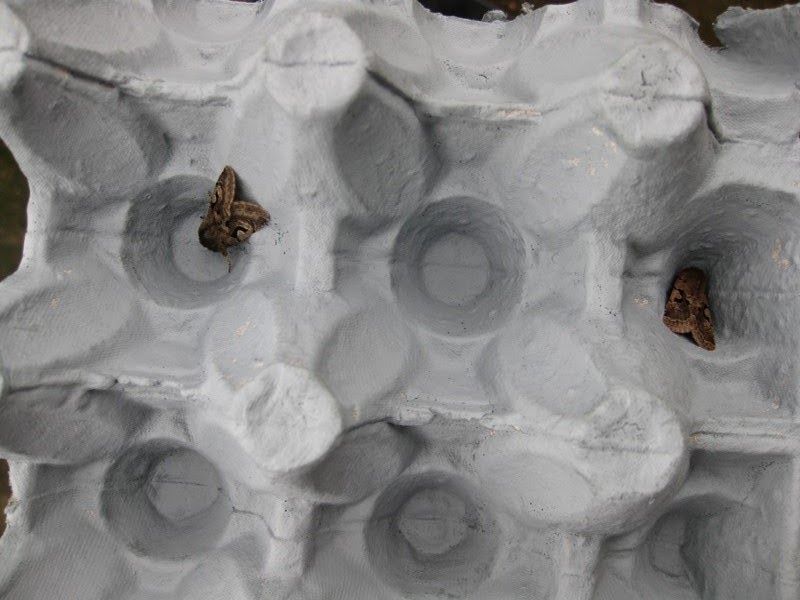 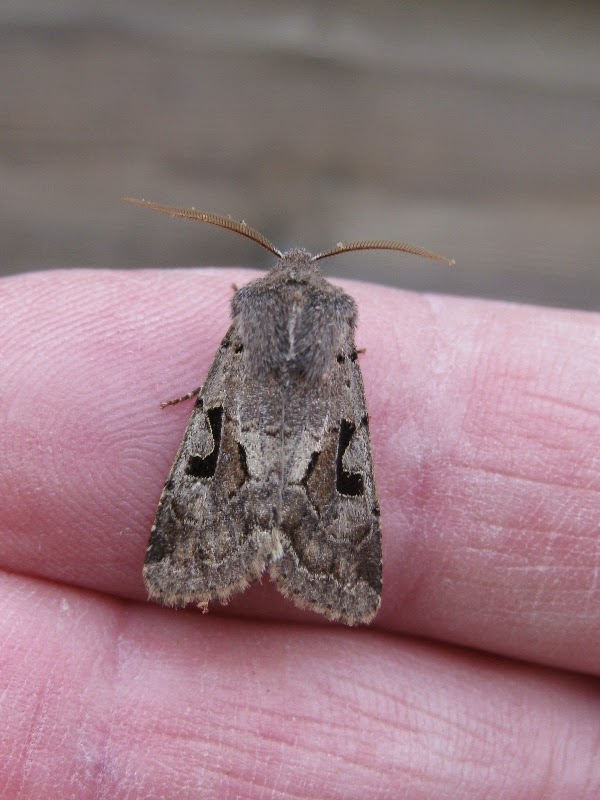 Once identified, I put the moths in a shed, where they would be safe from the garden birds that were showing an interest in what I was doing!

They may not be as colourful as a butterfly, but I can see that I could get quite hooked on trapping moths. At least it will keep me occupied until the weather warms up enough for the butterflies to start appearing.
Posted by Nick Morgan at 23:00 14 comments: