In my previous two posts I talked about eight of the species of butterflies that have recently been recorded in East Lothian. I would call these new species, but as I have discovered many of these species occurred here many years earlier.

The three species below have been recorded in the last couple of years. 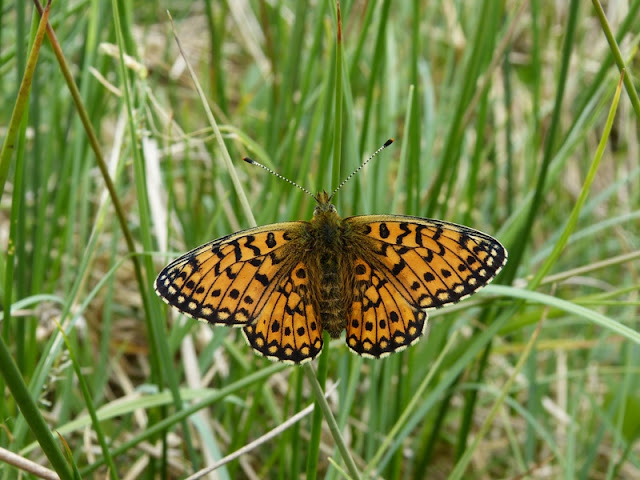 There is a record in "The Butterflies of Scotland" of Small Pearl-bordered Fritillary from East Lothian in 1845, but by 1900 it was not recorded from East Lothian any longer. There are various scattered records from around Scotland, and it seems that it occurs in small isolated colonies. It was discovered again in East Lothian in 2013 in a small valley in the Lammermuir Hills. 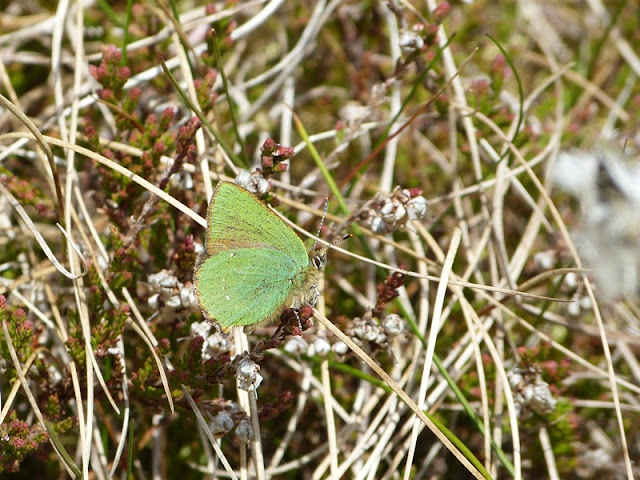 There are scattered records from all over Scotland in "The Butterflies of Scotland", but it doesn't show any Green Hairstreaks occurring in the Lothians. The "Provisional Atlas of the Insects of the British Isles" confirms that the only records were further west and north of here. However, I have been told of two sites in East Lothian where they are said to have been found about 30 years ago. I have checked both of those sites with no success, but last year Green Hairstreaks were found in the Lammermuir Hills, just inside East Lothian. This year another colony was found a few miles further into East Lothian. 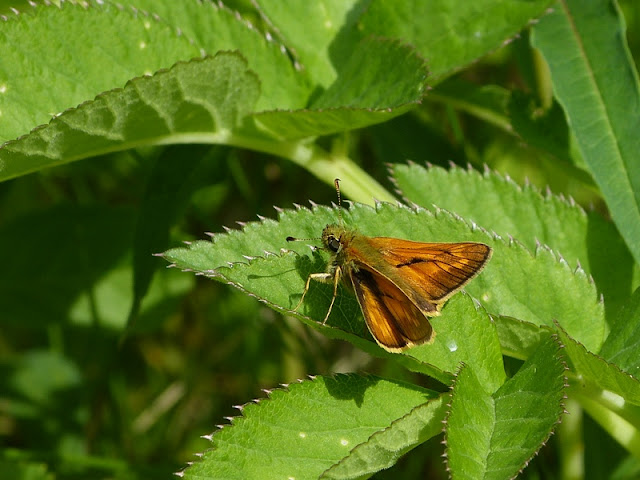 "The Butterflies of Scotland" shows records for the Large Skipper occurring in south west Scotland in the early 20th Century. There are a couple of records of it occurring in the Scottish Borders in the late 19th Century, but there is some dubiety about these records. The 1970 "Provisional Atlas of the Insects of the British Isles" shows no records in Scotland. In 2014, having spread further north in the Scottish Borders a couple were found just inside East Lothian, on the coast.

So, there are 24 species of butterflies occurring in East Lothian. The eleven species mentioned in these last three posts were not recorded here in 1970 and have all apparently appeared here since then. However, as I have now found out, seven of those species did once occur here, as early as the 1800s, but they apparently died out after that.

This of course leaves the big question, why? I certainly can't imagine that the habitat has improved in that time. In fact, the amount of undisturbed space has diminished in that time. I did wonder if it was something to do with the industrial revolution or the use of pesticides, but that wouldn't have made the butterflies head south to more populated areas of the country. Then my wife's cousin cracked it. "What about the Little Ice Age?" she asked. This was something that I hadn't hear of previously.

She sent me some information about the Little Ice Age, and although it isn't unanimously agreed when it began or ended I found some interesting information on Wikipedia. Apparently the NASA Earth Observatory has detected three cold periods starting in 1650, 1770 and 1850. The period of cooling starting around 1850 matches very well with the disappearance of some of these species of butterflies.

That same Wikipedia page also shows a graph of estimated average temperatures, which shows a considerable increase in the last 20 years. This could be a possible reason for the other species extending their range northwards into East Lothian.

I think there are more people recording butterflies these days, but I don't think that is the reason these butterflies have been recorded. Many of the people who send in records have noted new species where they have not seen them before. Possibly some species such as Green Hairstreak and Graylings, which are quite difficult to spot, have been here, undetected for many years.

Of course these are just some initial thoughts and I recognise that there could be some flaws in my theories. I would be very interested to hear other people's opinions about this.