I have mentioned in previous posts the remarkable expansion in the range of the Speckled Wood butterfly, Pararge aegeria. I have recently been going through the records and mapping where they have been recorded in East Lothian in the last few years. 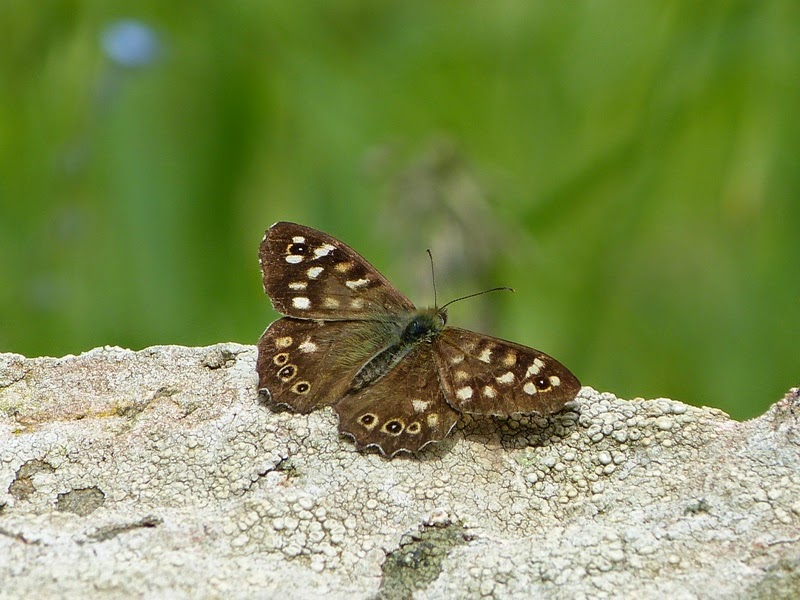 Up until 2009 we had no records of them occurring here, but a colleague spotted one right at the eastern boundary of East Lothian in May 2009 and two months later another was seen about 12 kilometres away at John Muir Country Park. 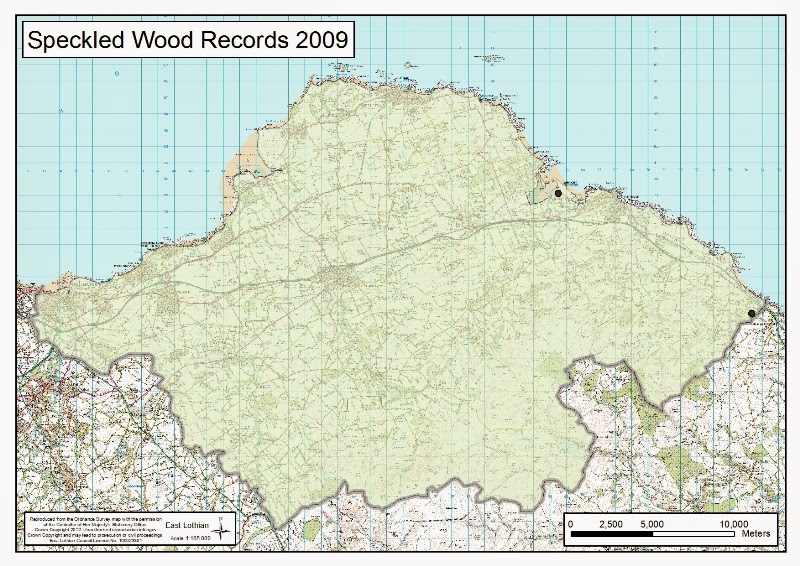 In 2010 I only received one record of Speckled Wood at Tyninghame Bridge in August. 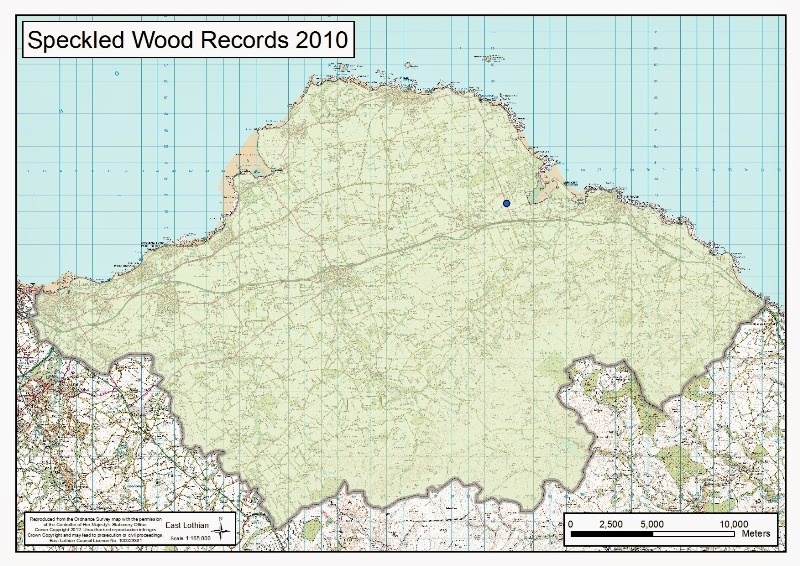 In May 2011 I found a pair of Speckled Woods in John Muir Country Park and subsequent visits in June and September found them at exactly the same spot. They were also seen in various other locations within the park. That year we also received records from Innerwick and at Yellowcraig about another 12 kilometres west. 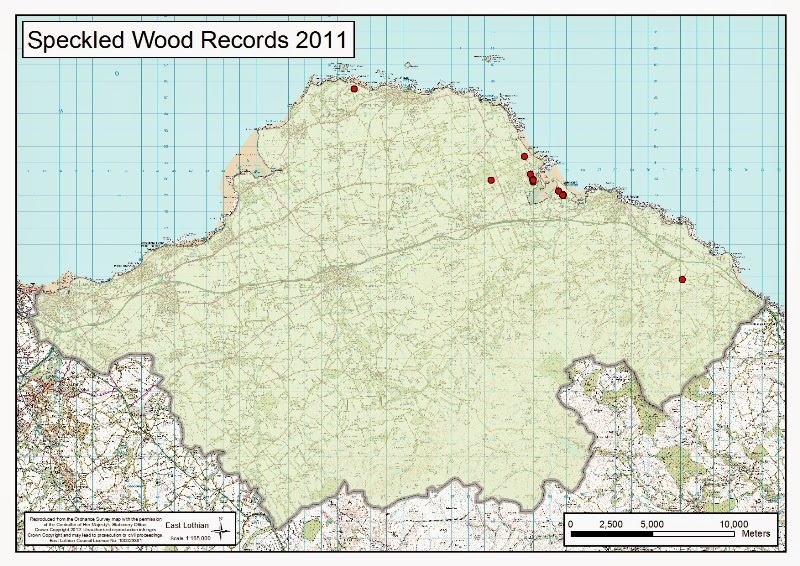 Despite the poor summer of 2012 I still received a number of records of Speckled Woods. They continued to be seen at JMCP and one was seen on two occasions in a small woodland close to Traprain Law. Most exciting were a number of records received from the Aberlady area, another large leap away. 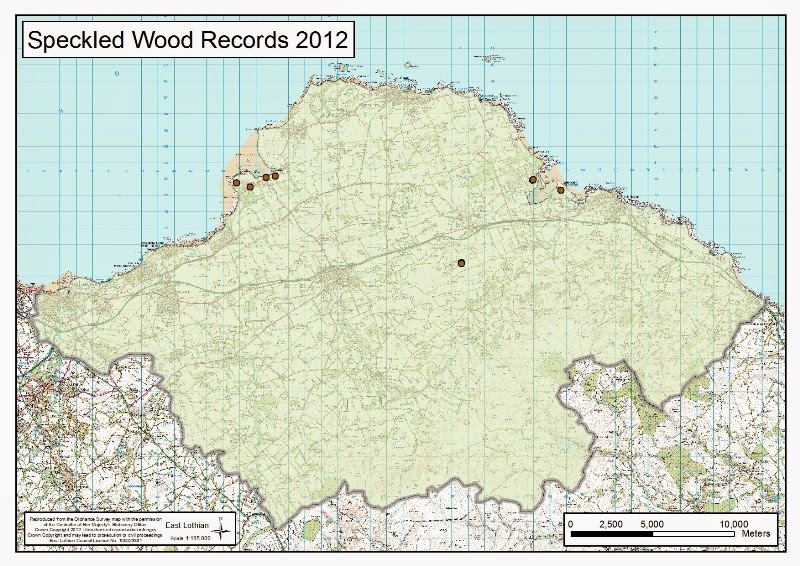 2013 was a fantastic year for butterflies and Speckled Woods seemed to do as well, if not better than most species. They spread for six or seven kilometres up the River Tyne from JMCP and continued to do very well in the woodland around Aberlady, spreading westwards along the coast to Port Seton. They also seemed to be spreading along the woodland on the Longniddry to Haddington Railway Walk towards Haddington. Late in the season, records were received from Skateraw and Thorntonloch, nicely filling in a gap on the east coast and in November a record was received from the coast on the west of the county, showing that they had spread the length of the East Lothian coast in five years! 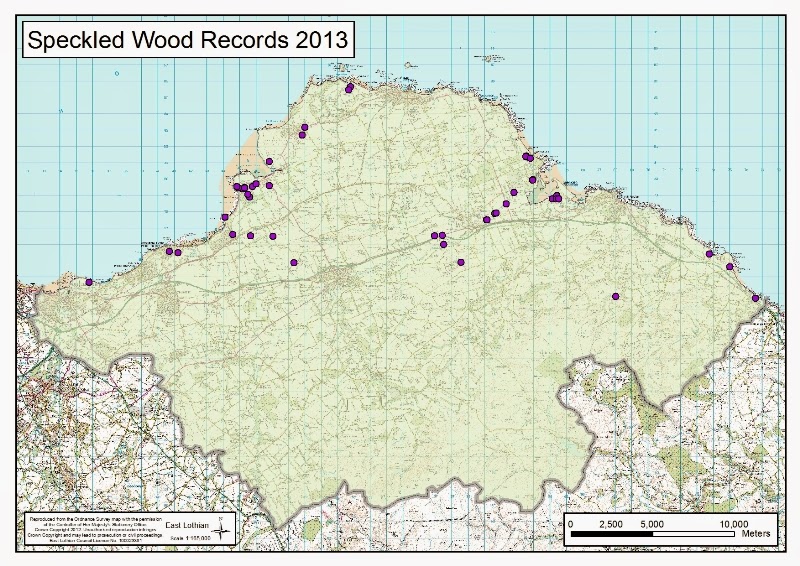 In 2014 Speckled Woods continued to expand their range, following the River Tyne up to Haddington and moving inland towards Gifford and Saltoun Woods. In late summer they became the most numerous butterfly seen in many parts of East Lothian, and on 10th September I saw over 400 in a wood near Aberlady. 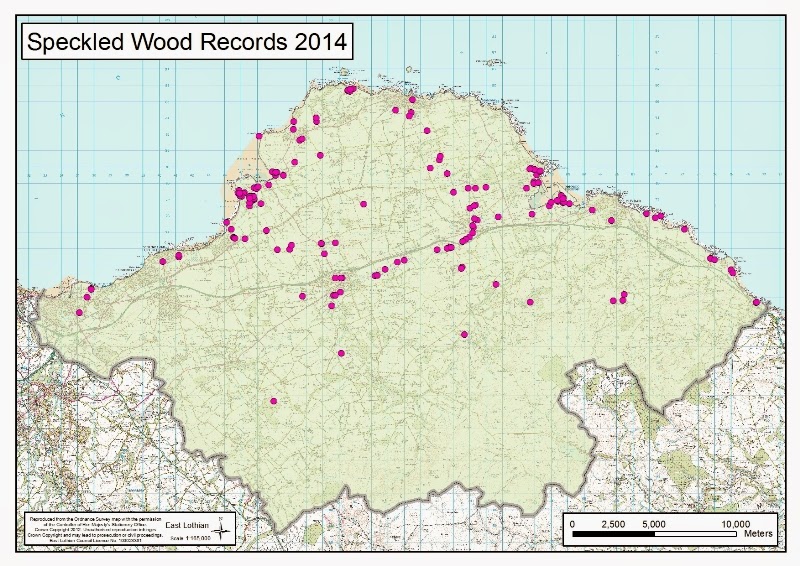 The increase in Speckled Wood records again last year must have been partly attributable to more people looking for them and sending records in, but I think we have still built up a pretty good indication of how the species has spread over this time. The rate of spread of the species seems quite remarkable and it is difficult to understand why Speckled Woods are extending their range at such a rate. It is easy to label this as another consequence of climate change, but since 2009 we have experienced two of the coldest winters in recent history and the wettest summer on record!
I am really looking forward to seeing if Speckled Woods spread to the remaining areas of East Lothian this year.
Posted by Nick Morgan at 23:01 4 comments: