Green Hairstreak, Callophrys rubi
We only discovered Green Hairstreaks for the first time in East Lothian in 2014, although I am sure they were probably hiding away in their remote locations for several years before that. This year the first record was on 20th May and they were recorded until 7th June. They were mostly recorded in the Lammermuir Hills, but also in an area of lowland woodland. 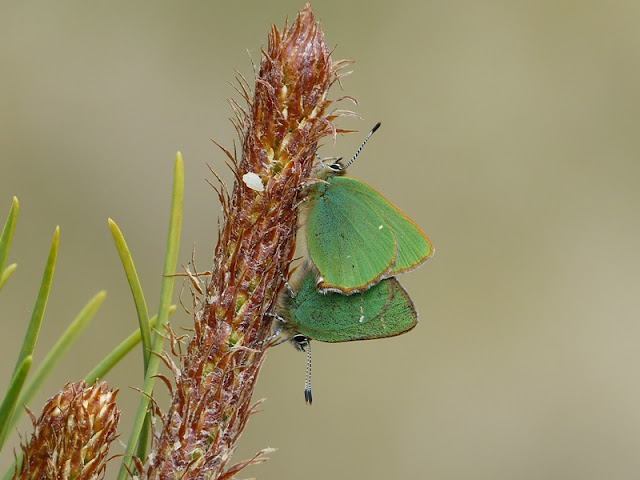 Wall Brown, Lasiommata megera
There were two distinct generations of Wall Browns between 30th May - 2nd July and 16th August - 19th September. They seemed to be quite abundant this year and I have been told that they were particularly abundant on the coast in the Scottish Borders. This is good news as they are struggling in southern England, possibly as a result of climate change. 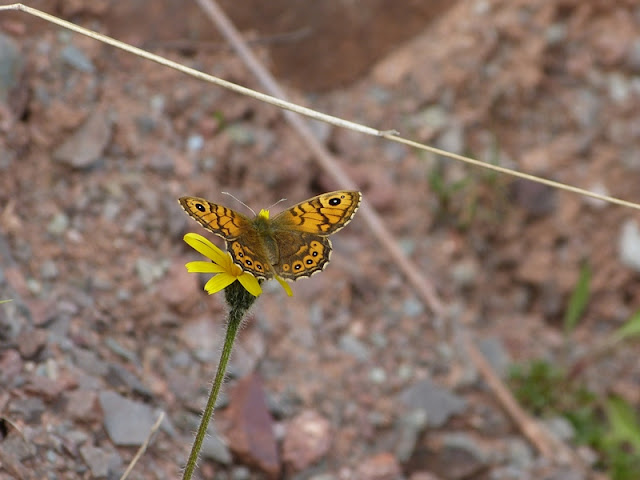 Painted Lady, Vanessa cardui
I had thought that 2015 was a poor year for Painted Ladies, as I only saw one all year! However, I received quite a few records from other enthusiasts. Considering the number of Red Admirals that arrived here in July, I was surprised there weren't more Painted Ladies, though. The first record I received was on 11th June and the last one seen was on 26th October. 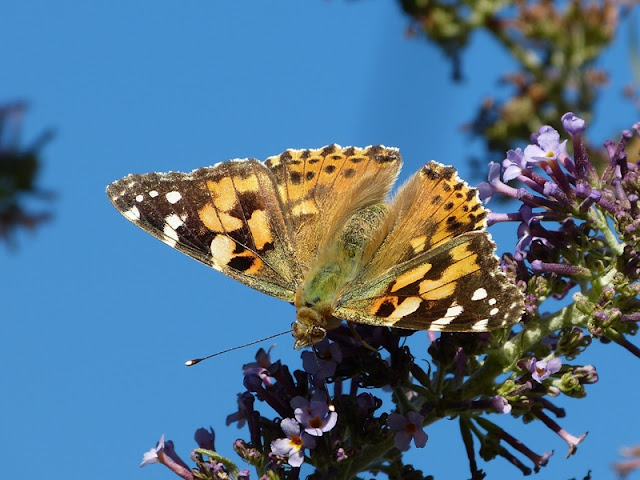 Common Blue, Polyommatus icarus
The first Common Blue recorded in 2015 was on 11th June and they were recorded through to 29th September in good numbers. There was no clear division between the two generations. For some reason there was a much higher proportion than normal of females reported than in previous years. 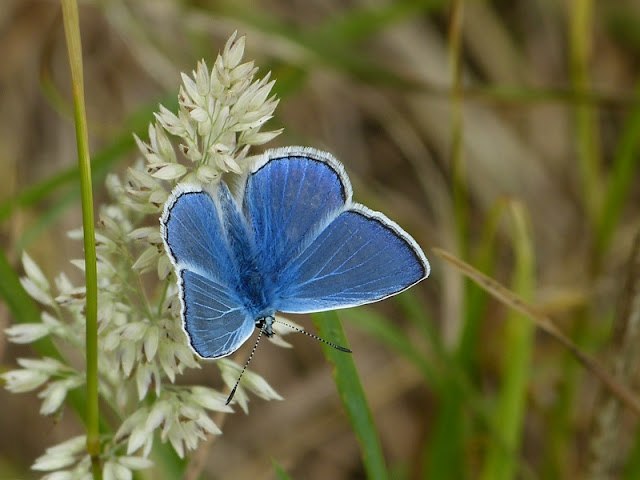 Northern Brown Argus, Aricia artaxeres
I am only aware of four sites in East Lothian where Northern Brown Argus occur. Three of these sites are smaller than the average sitting room. This year I only received records from two sites with the earliest being 20th June and the latest was on 7th August. 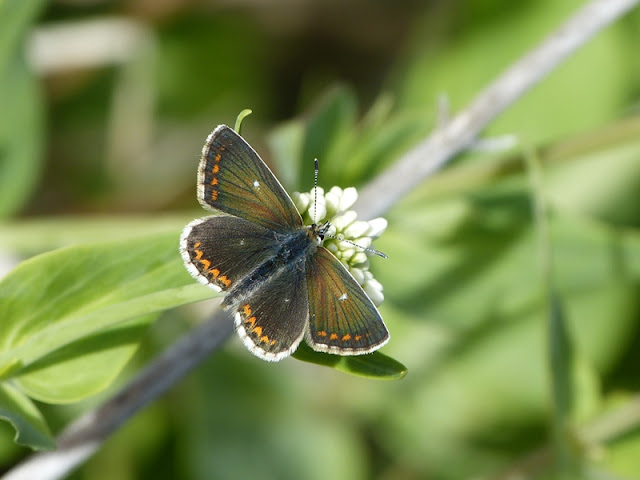 Ringlet, Aphantpopus hyperantus
Ringlets were seen in their usual good numbers between 24th June and 16th August. They seemed to have a longer season than in previous years, possibly because the weather was so poor. 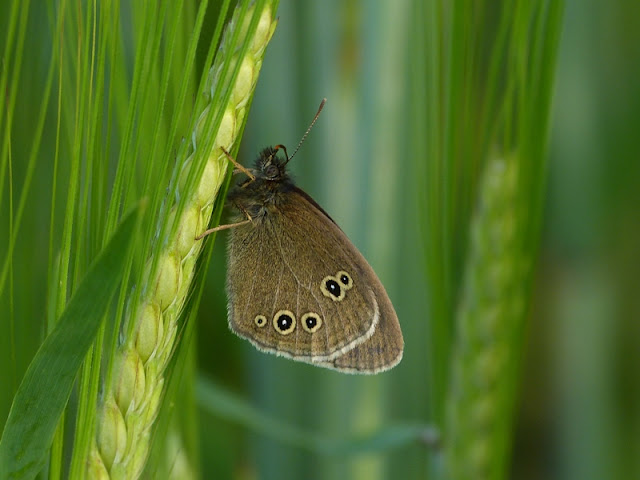 Meadow Brown, Maniola jurtina
As usual Meadow Browns were very numerous in 2015. The first record was on 27th June and they were seen through to 3rd September, with a peak in numbers in early August. 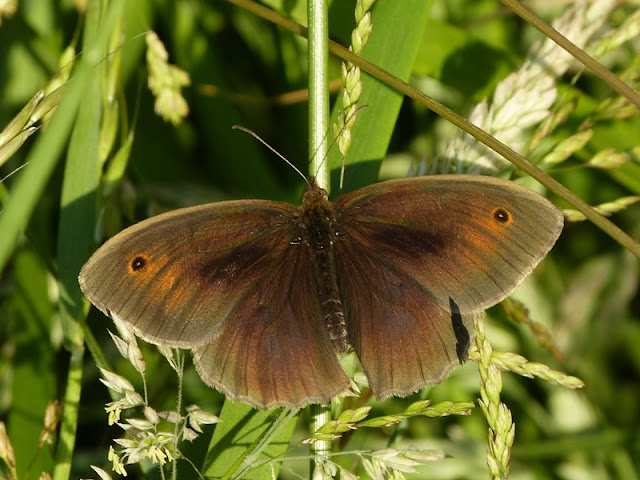 Dark Green Fritillary, Argynnis aglaja
The Dark Green Fritillary is mostly found on the coast of East Lothian, but there are a few inland sites where they are also found. The first record in 2015 was on 27th June and they were seen until the 15th August. 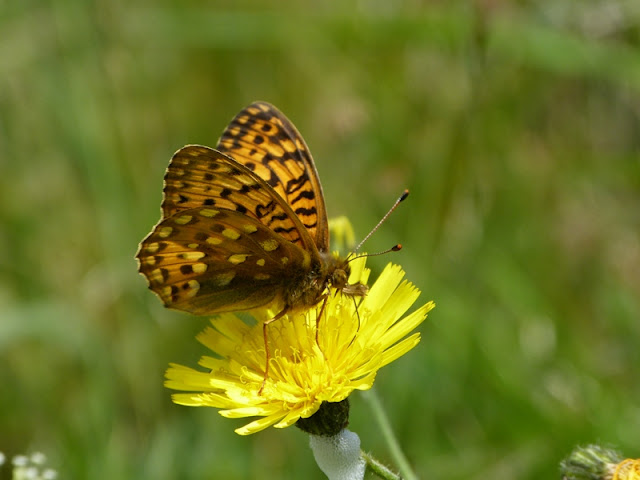 Small Skipper, Thymelicus sylvestris
The Small Skipper was first recorded in East Lothian in 2011 at Aberlady Local Nature Reserve. It has since done incredibly well and spread along the coast and is also found at a couple of inland sites. In 2015 it was recorded between 28th June and 29 August. 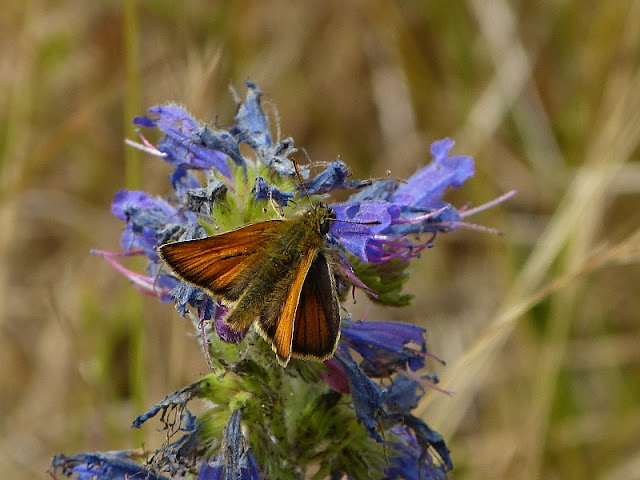 Grayling, Hypparchia semele
I am only aware of three sites where Grayling occur in East Lothian. One of those sites is in an area that is due to have houses built on it and we are currently unable to access it. All of the records I received in 2015 were from a nearby site, which is an old mining spoil heap. The first Grayling was recorded on 3rd July and they were seen till 6th August.

Small Pearl Bordered Fritillary, Clossiana selene
The only record of a Small Pearl Border Fritillary this year was on 3rd July when I briefly saw one at a site in the Lammermuir Hills. This is the only place I am aware of them occurring in East Lothian, so I hope they are able to hang on there.

The only butterfly that I was hoping to see in East Lothian that we didn't record in 2015 was the Large Skipper. They had been seen just inside the East Lothian boundary in 2014 and we had high hopes that they would increase in number or progress along the coast as so many other species have done. They may have been there, but due to the lousy weather no one was there to spot them!  With a bit of luck we will find them again in 2016.

It is fantastic having so many people contributing to the butterfly records in East Lothian. We are building up a really good picture of what is going on during a very interesting period in the distribution of butterflies here. I wonder if we will have any new butterflies in 2016?