A couple of days into our holiday to Cyprus I walked up the road towards Mavrokolympos Dam. I had been told that this road was a great place to see butterflies, but I had also been told that July was not a good time of year for butterflies in Cyprus.

I walked for about two kilometres, but there were no butterflies along the side of the road, or along some small tracks leading to the dried up river. So, I decided to drive up to the reservoir and walked along its west side to the small river that feeds into it. 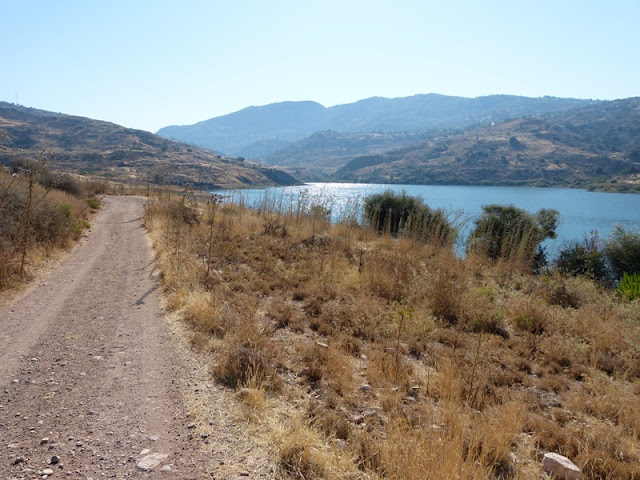 I was surprised that there were still very few butterflies, but in a small gully I found 11 Common Blues, Polyommatus icarus, all but one were males. 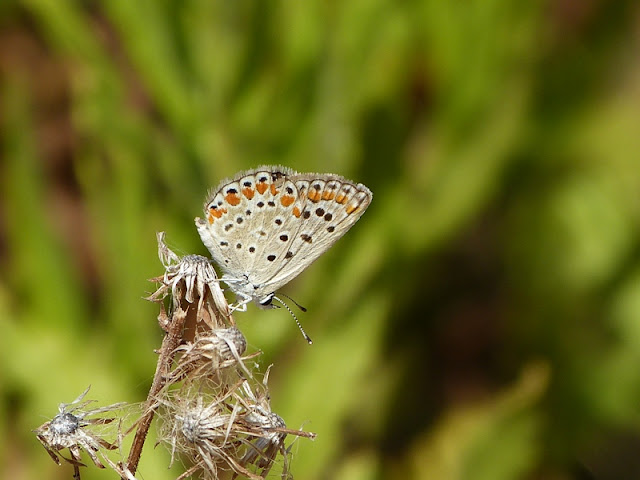 In the same area I saw a single Small White, Pieris rapae. 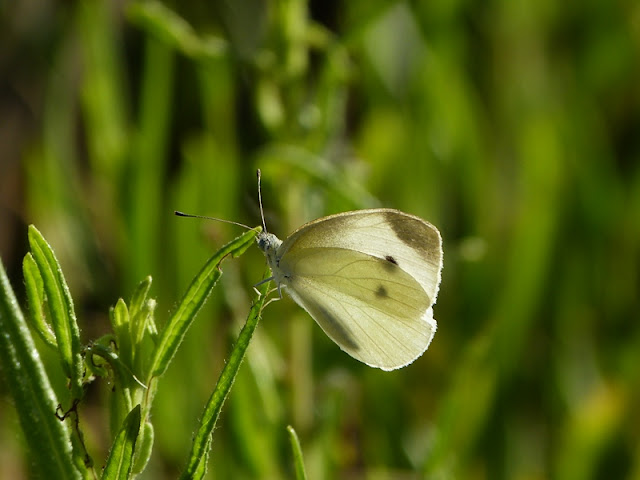 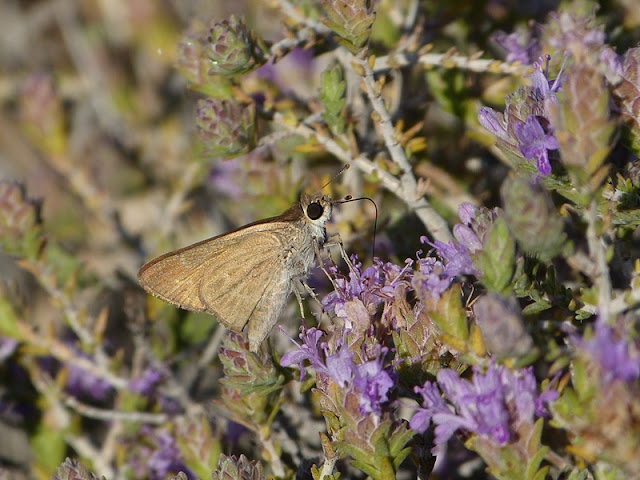 I was surprised to see water running down the river into the reservoir. There were several species of fish swimming in the water including some that looked just like goldfish!

I searched the grass around the river for some time, thinking that it would be a good place for Dark Grass Blues, Zizeeria karsandra, which at that time I hadn't yet seen. Unfortunately, there were none there, but a Swallowtail, Papilio machaon, spent a long time feeding on the flowers of a shrub there. 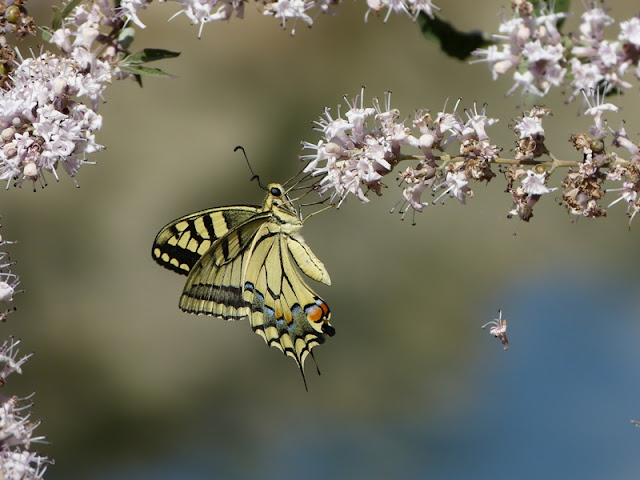 There were also many different varieties of dragonflies and damselflies there, which I spent some time watching. By this time I realised that I had spent longer than planned here and I was due to buy some bread on my way back for lunch. I rushed back to the car and started driving down the road, only to discover that it had been closed to traffic! Three large boulders had been pushed across the road. I drove back up to the dam where there were two men surveying the dam wall. We all drove back to have a look at the road block and after many very animated phone calls the men told me that the road authority wanted money to open the road again! 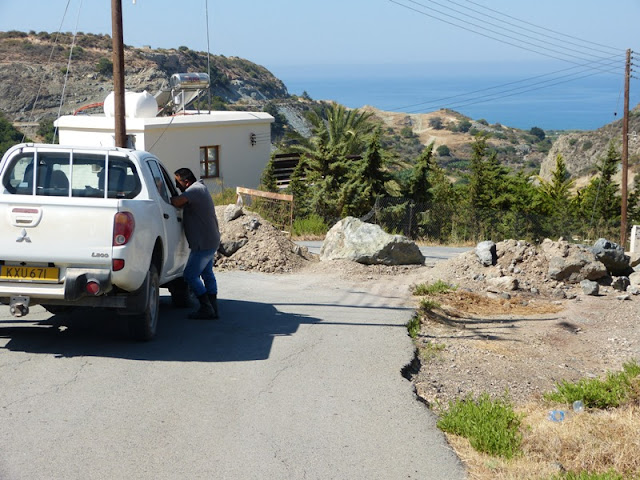 One benefit of waiting there was that a Hermit, Chazara briseis larnacana, landed at the side of the road. 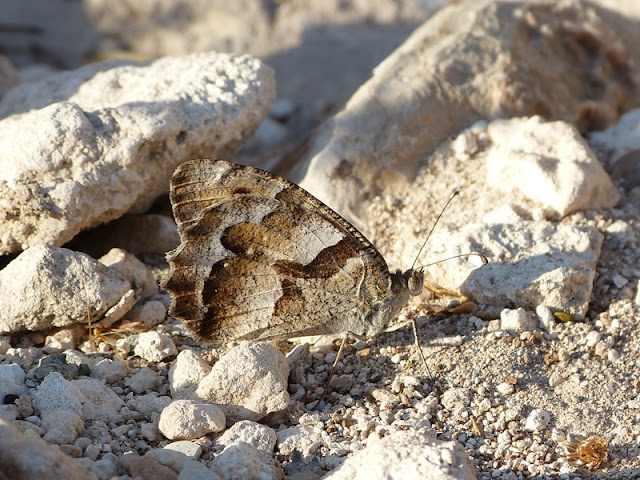 The underside was a lovely pattern of beige and brown and the upper side was mostly dark grey with white markings. The butterfly tended to land and immediately close its wings, then a few seconds later flash its wings open very briefly. I was lucky to snap this fuzzy picture of it with its wings open. 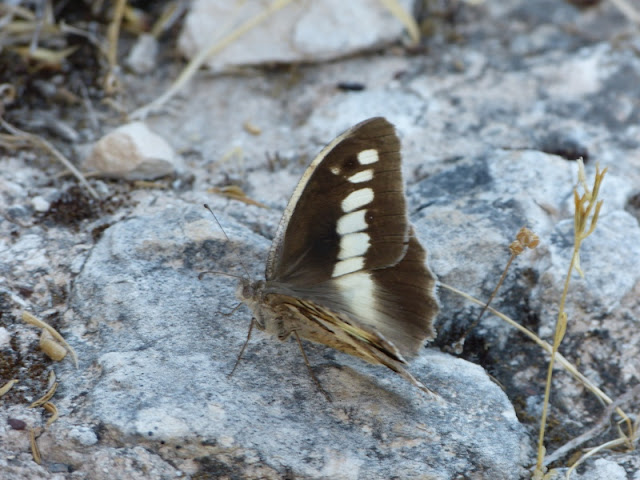 We spent some time looking at the boulders and at a fence next to the road to see if we could make a way past. Eventually the men suggested that we should try to drive along a dirt track. They said their truck could make it, but it could be a problem for my hire car! Eventually, after much wheel-spinning, bumping and sliding we made it through to a tarmac road. All along I was thinking of the contract that I had signed with the car hire company stating that I wasn't to take the car off-road! Luckily no damage was done and they were none-the-wiser!

We have just returned from this year's family holiday to Cyprus. We were based in a villa on the outskirts of Pegia, about five miles from the coast at Coral Bay.

Normally, before we go anywhere on holiday I spend ages researching what butterflies I may see, but this year my life was made so much easier by Eddie John's fantastic web site. This has all of the information anyone would need about the butterflies of Cyprus. Eddie runs the butterfly recording scheme for Cyprus and he was kind enough to send me the grid squares they use to record butterflies along with some tips on good places to look for them.

I also bought a copy of The Butterflies of Cyprus by Christodoulos Makris. This is a large book with details of every species of butterfly that has been seen on Cyprus along with distribution maps. 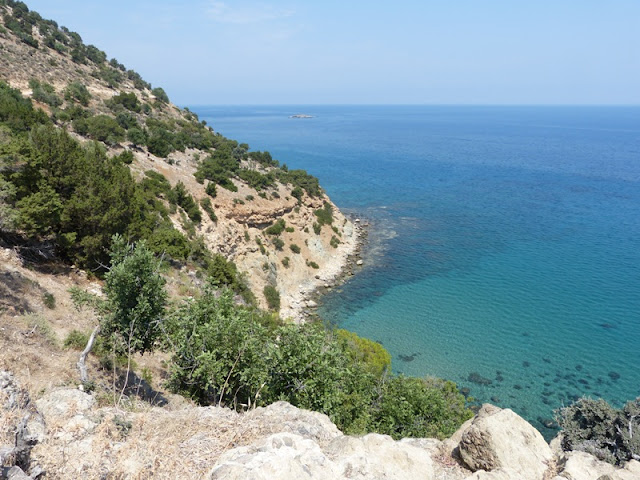 I was advised that July isn't a particularly good month for butterflies in Cyprus because much of the vegetation is dried out at that time of year. However, as I discovered, if you pick your spots then there were plenty of opportunities to see butterflies.

53 species of butterflies have been recorded on Cyprus, but five of those are very rare migrants, so it is probably more realistic to say that 48 species occur on Cyprus. 38 of those species occur in July.

Near the villa was an area of waste ground where there were two large Thyme plants growing. Every time I visited them there were about ten butterflies in that small area. The most common was the Cyprus Meadow Brown, Maniola cypricola. 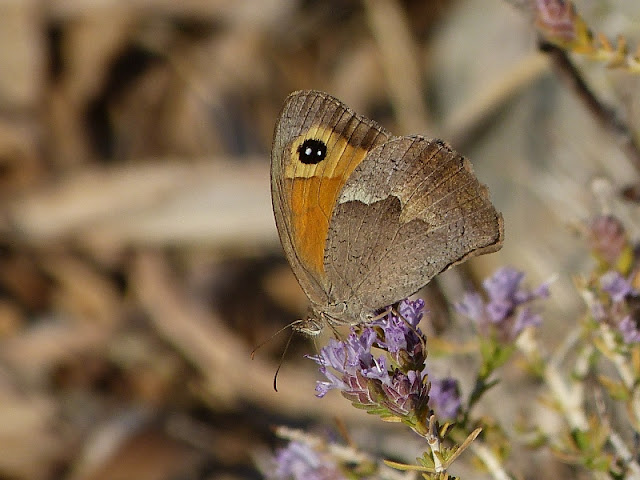 The upper side of the females has lovely orange markings. 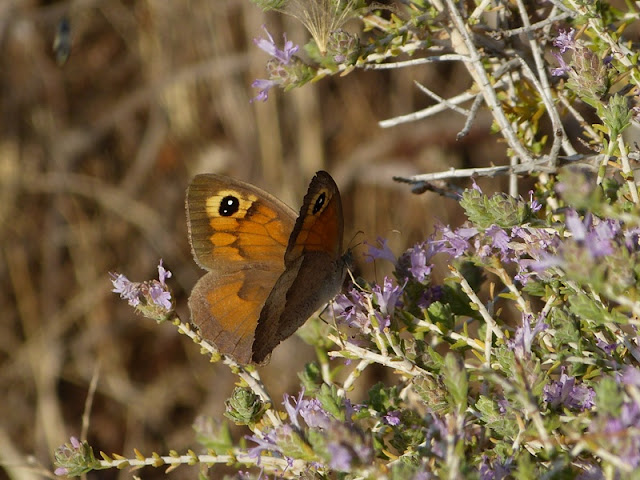 The males are less boldly marked and I noticed that both males and females can be quite variable.

There were also a number of Large Wall Browns, Lasiommata maera, in the area. Superficially these looked quite similar to the Cyprus Meadow Browns and I would have to wait for them to land before I could positively identify them! 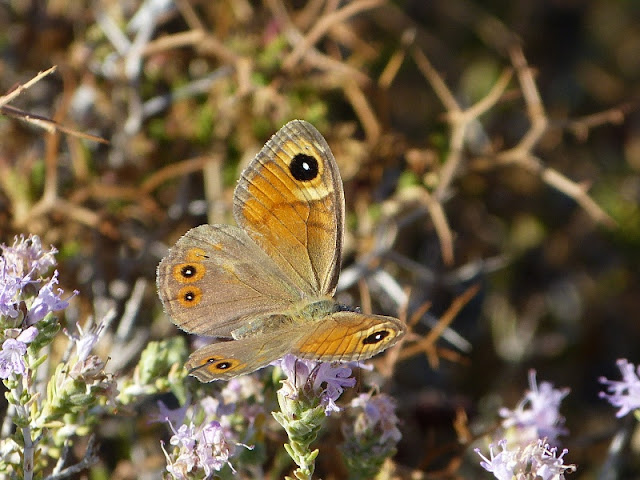 And in amongst these two were the occasional Wall Brown, Lasiomata megera. 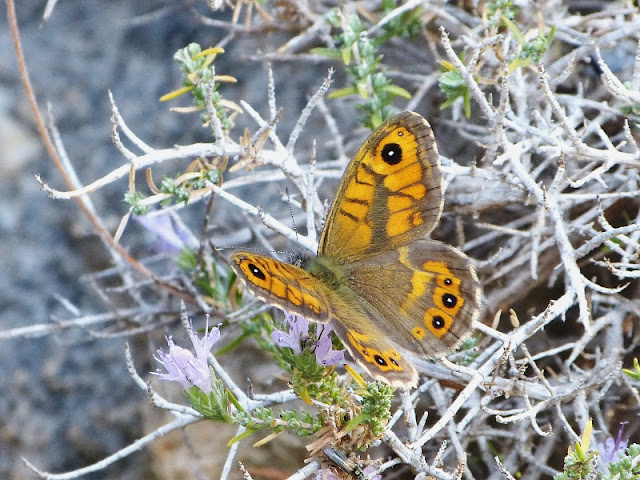 As well as seeing these butterflies in this area, these three species would also regularly drift through the garden of the villa we were staying in. Several times a day we would also have a Swallowtail, Papilio machaon, fly into the garden and spend several minutes flying around the orange trees. It seemed to be attracted to the trees, but never landed on them.

Long-tailed Blues, Lampides boeticus, were very regularly seen in the garden, but again they never landed or fed on any of the plants. 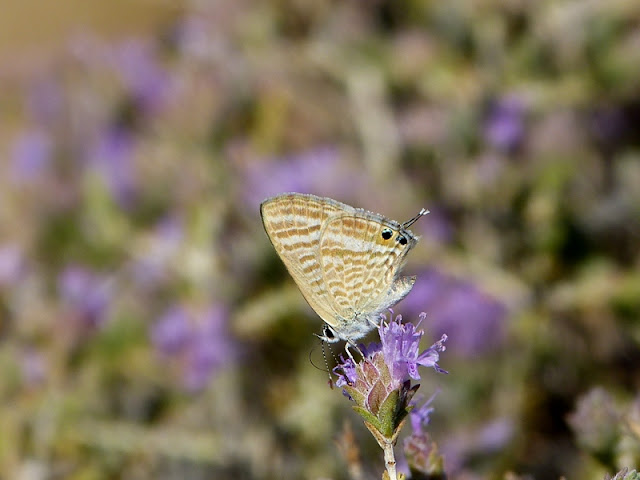 On our first day a Cleopatra, Gonepteryx cleopatra, flew into the garden and landed on a Hibiscus plant. They are so well camouflaged that I couldn't find it until I disturbed it and it flew off. I realised that I had been staring at it all along thinking it was a leaf! That was the only one I saw in the area.

Meanwhile, back at the patch of Thyme I regularly saw Holly Blues, Celastrina argiolus, and Lang's Short-tailed Blue, Leptotes pirithous. These are becoming much more common on Cyprus than they once were. 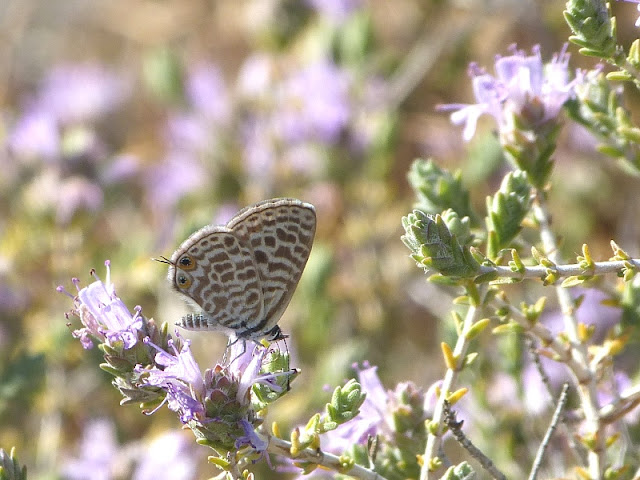 Further down the track there was a dried-up stream where I was lucky enough to see a Millet Skipper, Pelopidas thrax. This was the only one I saw on my holiday. 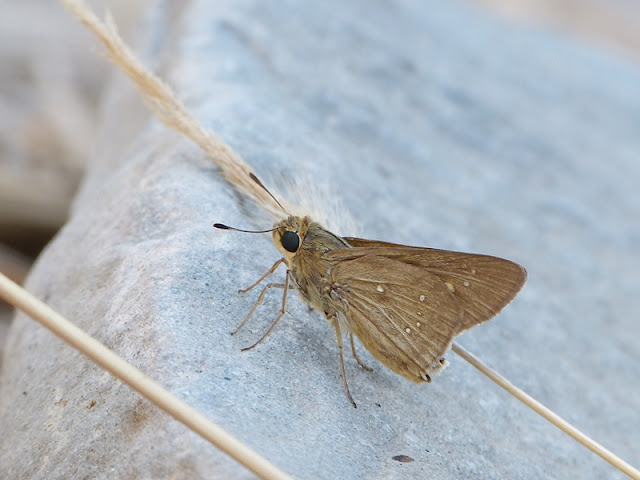 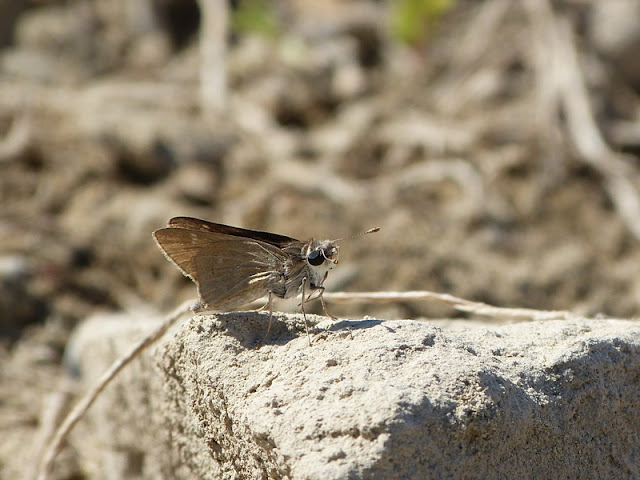 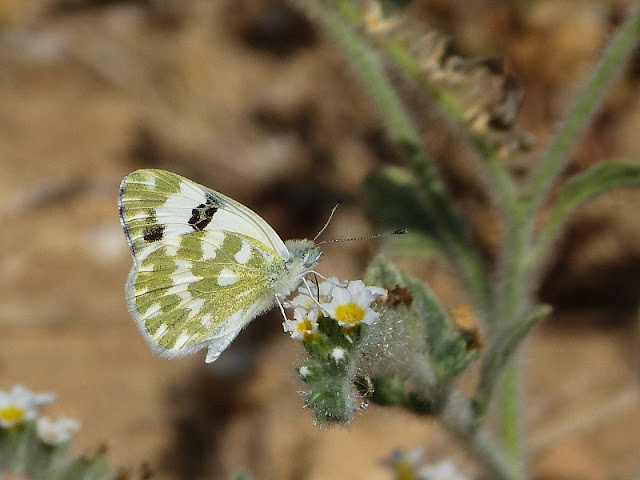 Later on our holiday I was surprised that I hadn't seen any Dark Grass Blues, Zizeeria karsandra. Up until recently these were considered to be a sub-species of Zizeeria knysna, which I regularly see in Spain and the Canary Islands. There they are commonly found on irrigated grass, road sides and by water courses, but for some reason I didn't find them in similar habitats on Cyprus. Eventually I spotted some flying next to a bin in Coral Bay when I had driven in to buy my morning croissants! 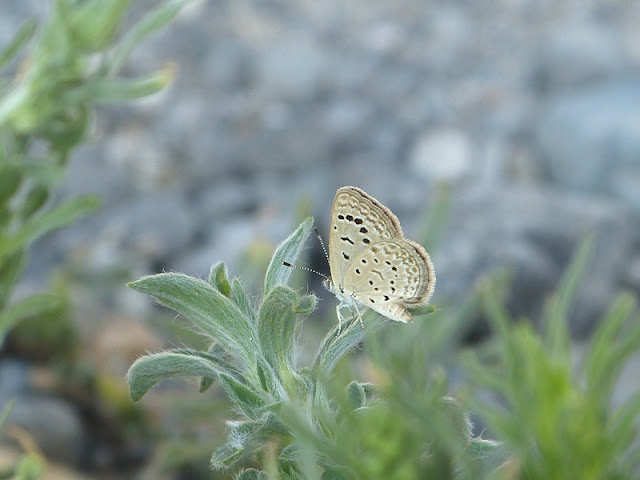 There was a thunder storm on our last night and the next morning it was still cloudy. So, I decided to pay a quick visit to the Thyme bushes to see if there were any different butterflies flying in the overcast conditions. The usual species were still flying as usual, but on the track I spotted a Grass Jewel, Chilades trochylus, on a plant in the middle of the track. These are Europe’s smallest butterflies and they are almost impossible to follow when in flight. 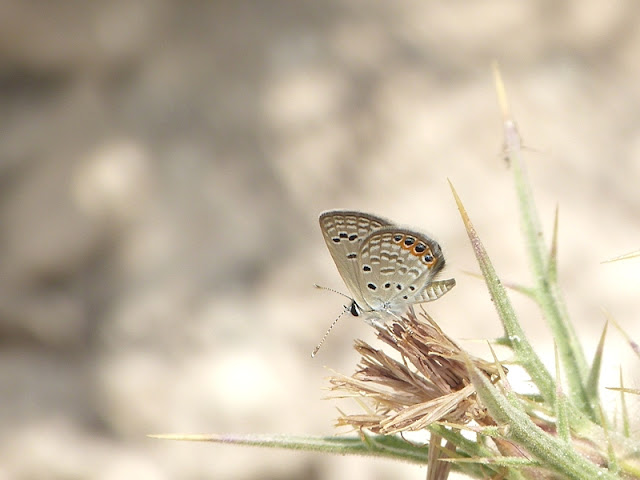 I had seen a Grass Jewel earlier in my holiday on a trip up to the Troodos Hills. I will try to write posts about what I saw in Troodos, Larnaca Salt Lake and the Movrokolympos Dam over the next few days.
Posted by Nick Morgan at 18:50 4 comments: