Last September my wife and I decided to go and explore some nearby villages and we randomly picked Casarabonela, which is about thirteen kilometres west of Alora, where we were renting a flat.

It is amazing what a difference those 13 kilometres make, though, and we noticed how green the countryside was on the drive up the hills towards Casarabonela. It is an amazing little village, perched on a steep hillside, with narrow little streets, only wide enough to walk up. As with many Spanish villages, it wasn’t always apparent which streets were suitable for vehicles as many of them started off wide, but narrowed, or had really tight corners, or steps! 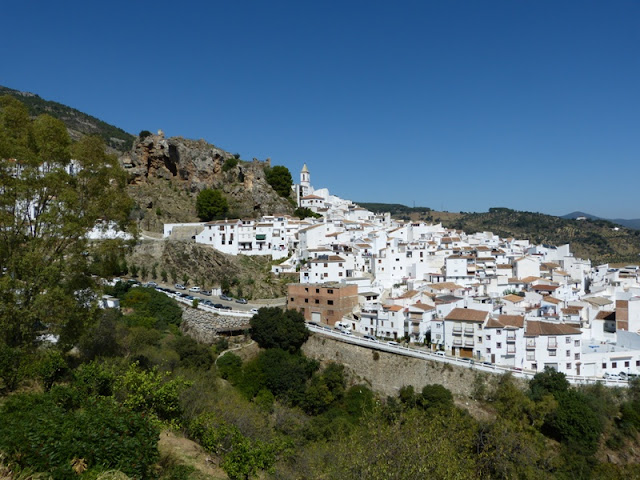 Luckily, we decided to park the car near the bottom of the village and walk through the streets to the main village plaza where we found a café that served cold beer, with amazing views over the valley.

This trip wasn’t meant to be a butterfly trip, but I was amazed at how many butterflies there were flying around the village. This butterfly had be puzzled and I still don’t know exactly what it is! When I first saw it, I assumed it was going to be a Southern Brown Argus, but the pattern on the underside of the wings suggest it is most likely a Southern Blue, Polyommatus celina. However, it was very much larger than others I have seen elsewhere in Spain. Possibly the lush vegetation allows then to grow a little larger here than in more arid areas where I am always surprised that they are so much smaller than Common Blues that we get back home. 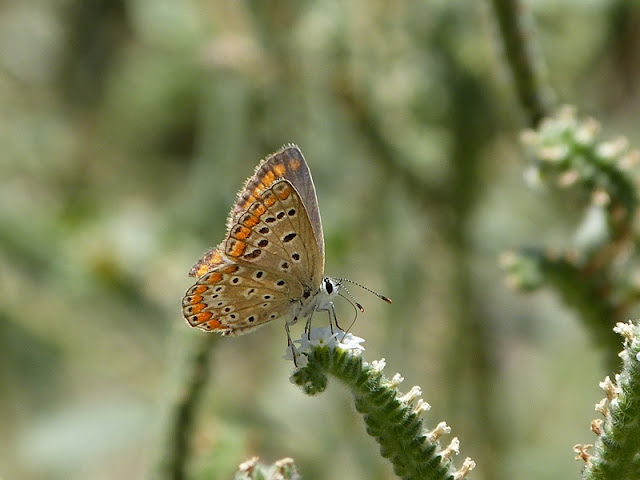 There were quite a few Geranium Bronzes, Cacyreus marshalli, flying in the village, presumably taking advantage of the lovely geraniums growing in all of the window boxes around the village. 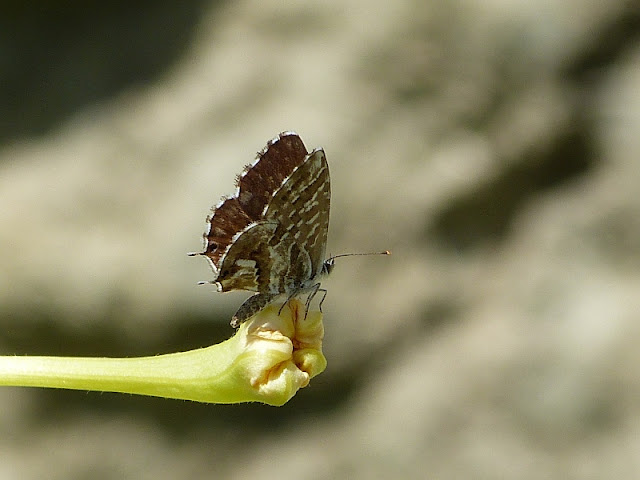 I stopped in my tracks when we were walking next to a small formal shrub garden and I was astounded to see a Spanish Festoon, Zerynthia rumina. I had always assumed these were a springtime species, but when checking the books I see that they are double brooded in some locations. This picture was taken on my phone, so it is a little fuzzy. 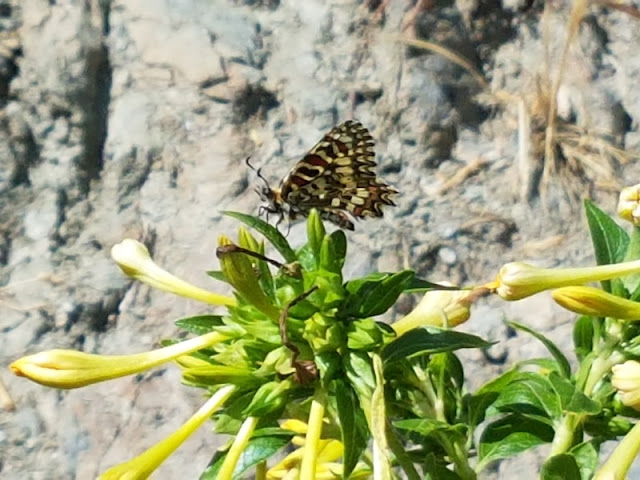 This turned out to be one of five we saw there and to my wife’s frustration I would chase off after others trying to get a picture, but they were very active and wouldn’t let me get close.

There was a steep ravine running into the village with terraced orchards and vegetable gardens. From the pavement above I could see a number of Holly Blues, Celastrina argiolus, flying around some ivy-clad buildings, all too far away to photograph! 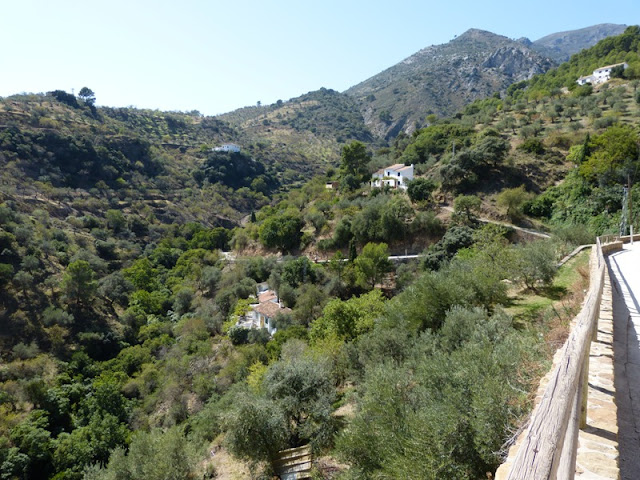 As we walked along a road with an orchard below I was delighted to see a Two-tailed Pasha, Charaxes jasius, drift past us and down amongst the fruit trees. All along this road there were Small Whites, Pieris rapae, and what looked to be freshly emerged Large Whites, Pieris brassicae. I spotted a house with an amazing garden full of flowering bushes. I really wished I could have gone and had a look inside the garden, but on the hedge outside was a Long-tailed Blue, Lambides boeticus. 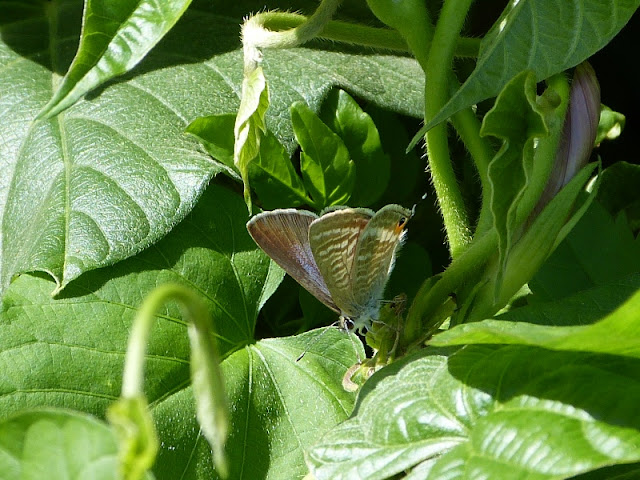 Higher up in the village we found the municipal swimming pool, but sadly despite us really feeling the heat, it is considered too cold for it to remain open in September. The lovely cool water looked so tempting through the bars! As we walked along this road, with scrubland on one side, we saw a few Swallowtails, Papilio machaon, a worn out Meadow Brown, Maniola jurtina, a Painted Lady, Vanessa cardui 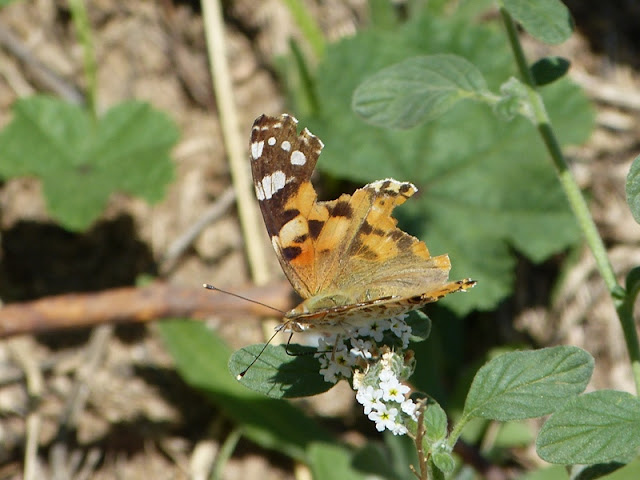 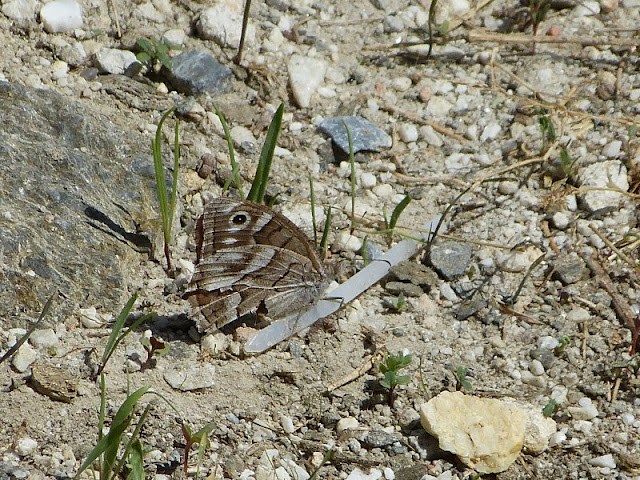 This is a beautiful little village and I really hope we can return there next summer when there may be more butterflies around and hopefully the swimming pool will be open!