Today was just about the perfect day!
The forecast was correct and we woke to a beautiful clear blue sky. That is something we haven't seen for a very long time! Even better, I had booked today off work and it is even rarer for the weather to be good on a leave day! 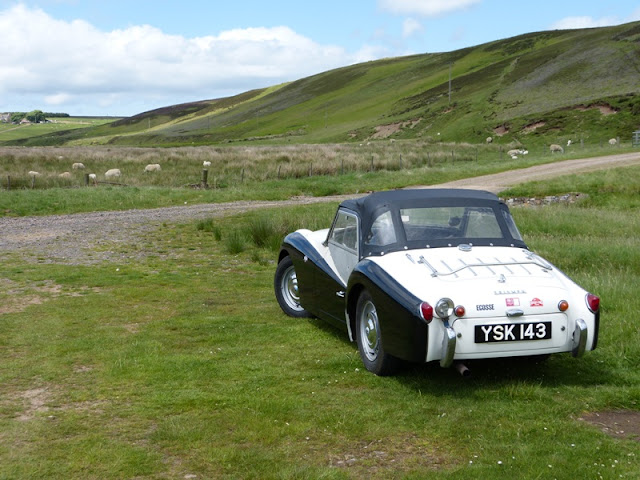 At 11:30 I jumped into my trusty old Triumph and drove down to the town where I work to walk my butterfly transect. This is a route that I walk once a week between April and September to log the number of butterflies I see. The route goes from close to my office, along the River Tyne for about one and a half kilometres through open woodland and into a meadow. 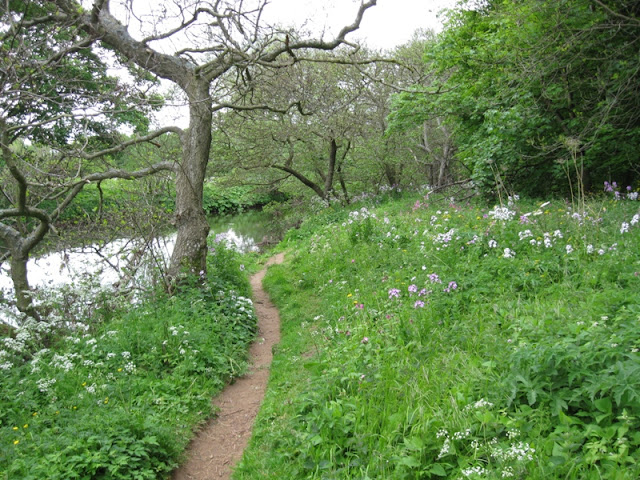 Initially I didn't see any butterflies, but on the third section of the transect an Orange Tip, Anthocharis cardamines, flew past me. I was thrilled to see it, as I always think the butterfly season has really started when Orange Tips start to appear. When I reached the area pictured above I saw a pair of Green-veined Whites, Artogeia napi. The Green-veined White is one of our most common butterflies, having two generations a year. 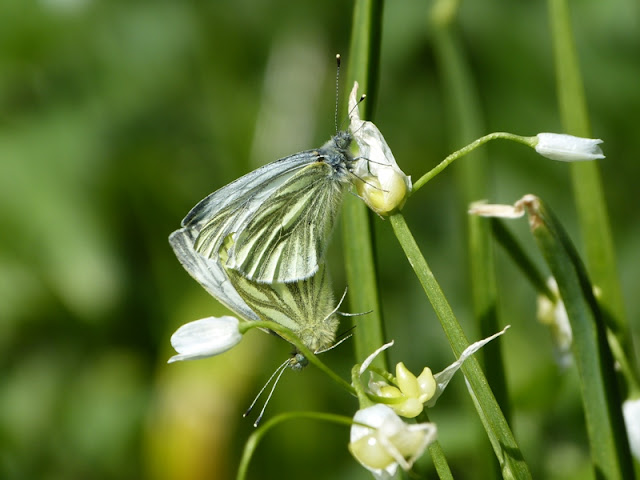 While I stopped to take a picture another Orange Tip flew past and it was soon joined and pursued by another Green-veined White. They, in turn, disturbed another Orange Tip that had been feeding on some Cuckoo Flower. Luckily it briefly returned to the plant. 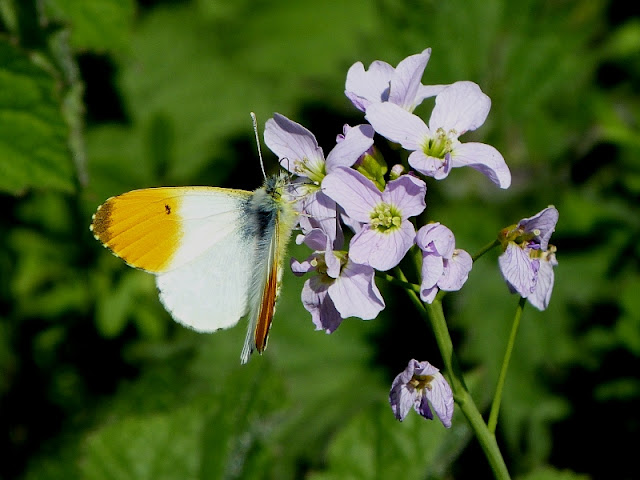 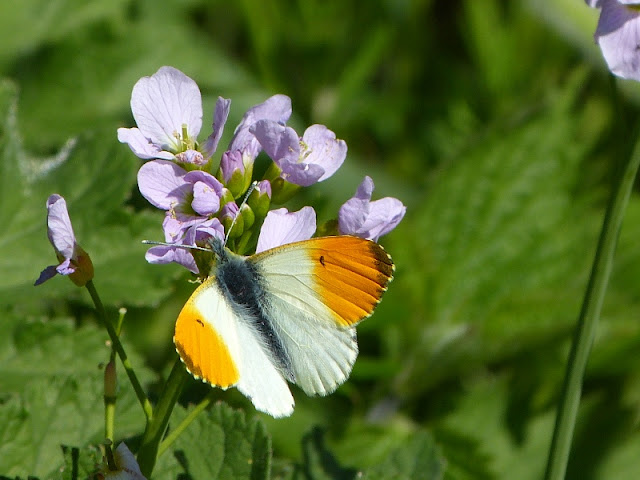 It then posed for me on some Forget-me-not. 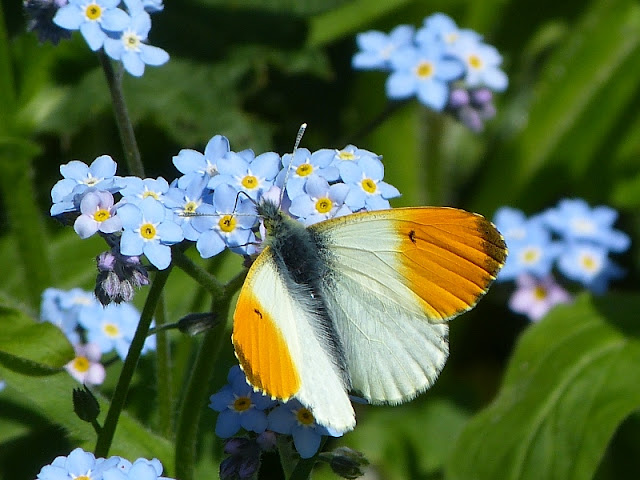 These were the first Orange Tips I have seen this year. They normally appear around about the middle of April, so they are about three weeks later than normal. However, they are better late than not at all. Last year we had a flood in July and most of the area covered by my transect was flooded. The plants where they lay their eggs were all under water and I feared that I wouldn't see any Orange Tips this year. If the good weather keeps up, I hope I will see more over the next few weeks.
I saw five Orange Tips on my transect today, and a few more on my way back. Interestingly they were all male. The males always seem to appear before the females and they patrol up and down the river, presumably looking for a mate.
My transect also produced seven Green-veined Whites, a Comma, Polygonia c-album, and two Small Tortoiseshells, Aglais urticae. 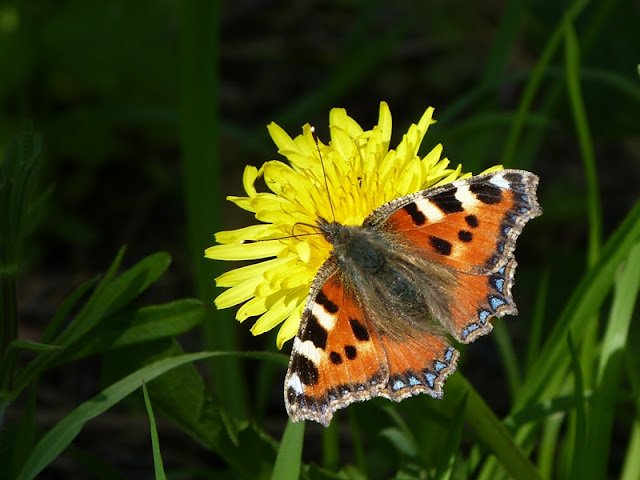 The Small Tortoiseshells are all looking a little faded and ragged after their long hibernation.

Even on the days that I don't see many butterflies there are usually a few birds to keep me occupied. Normally I see a Buzzard or two gliding over the trees by the meadow and almost every time I walk up the river a Kingfisher flashes past me. Today I saw a Grey Heron and plenty of Mallard ducks. 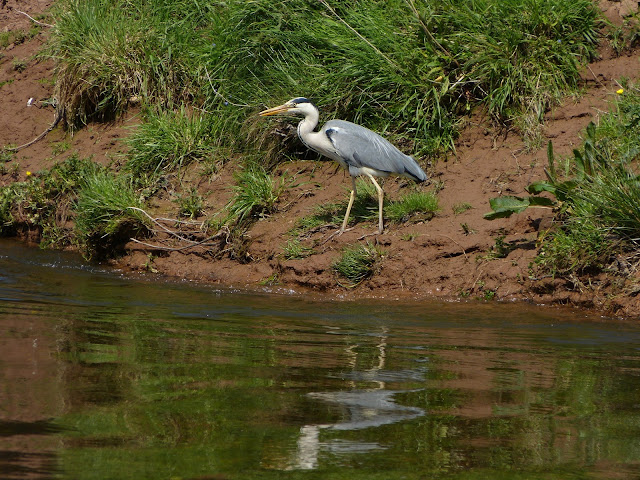 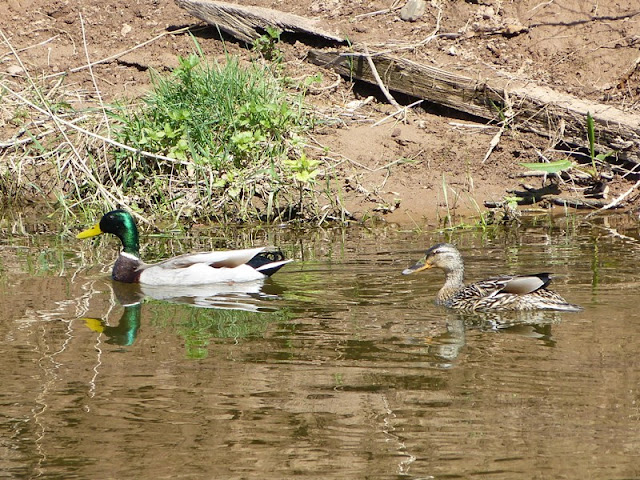 After returning to the car, I put the roof down and enjoyed the drive back to our village in the sun. I often dream about living somewhere warmer where I would be able to drive my Triumph more often and see more butterflies. But I guess if that was the case, I wouldn't get the thrill of days like today.
Posted by Nick Morgan at 23:37 12 comments: