Red Admirals in an Oak Tree

We had three days of warm sunshine this week, which hasn't happened very often this year! I chose the second day to do my butterfly transect, but I was disappointed that there were so few butterflies flying.

Towards the end of my transect I saw a Peacock butterfly flying towards a small group of trees. It was too far away to count on my transect, but I noticed another large, dark butterfly flying out of the trees. I thought it was worth investigating, so I took a slight detour to have a look.

I was surprised to see a Red Admiral, Vanessa atalanta, sitting on a branch of an Oak tree. 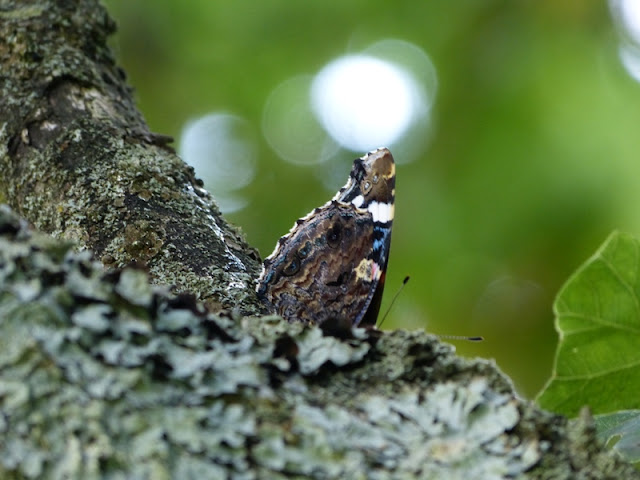 As I looked around the tree I spotted another three Red Admirals. They were all fairly high up the tree and it appeared that they were all feeding where dead branches were attached to a live branch. 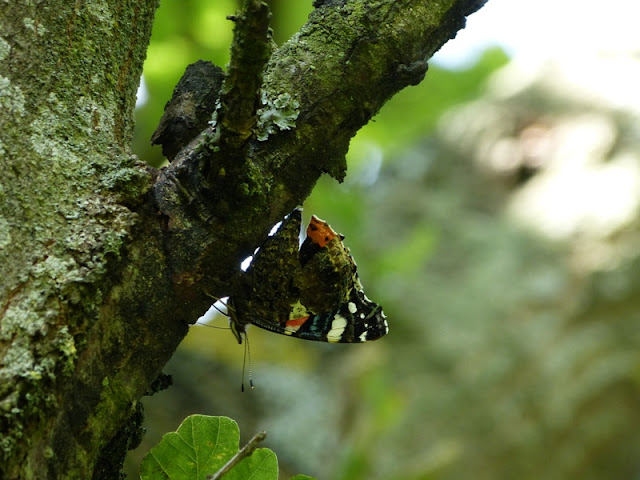 I don't know if they were able to reach in to find sap, or if there was moisture from the dead wood at that point, but they all seemed very possessive of their own little spot.

Quite often they were buzzed by a wasp causing them to fly off, but they would always return to the same spot. 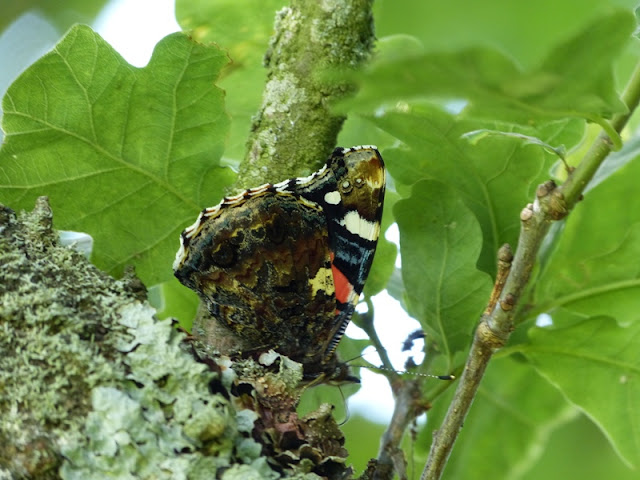 There were a couple of other Oak trees in the group of trees, but they didn't appear to be attractive to the Red Admirals. 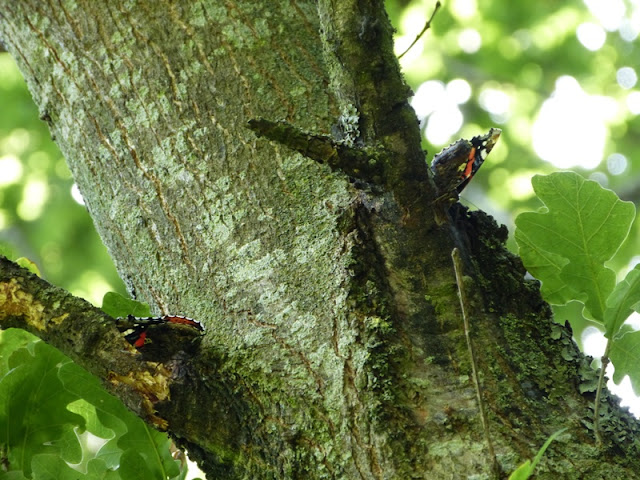 I am sure I have read somewhere about Red Admirals being seen on the trunks of Oak trees. I will have to do a little research and see if I can find out more.

Two of our volunteers also reported low numbers on their butterfly transects this week. Certainly when I was out and about I didn't see very many butterflies, although there were good numbers of Wall Browns along the coastal path. I have also received reports of a lot of Speckled Woods in some woodland sites, so it seems that some species are doing better than others.
Posted by Nick Morgan at 18:05 18 comments:

I have been particularly busy this year and the weather hasn't been the best for looking for butterflies. However, I have still managed a few trips down to the Scottish Borders to look for butterflies, some of which we don't get here in East Lothian.

Here are the highlights:

Between sessions of clearing the house and keeping the grass and woodlands in check I managed a quick visit to a valley just above our property in Selkirkshire on the 18th June. 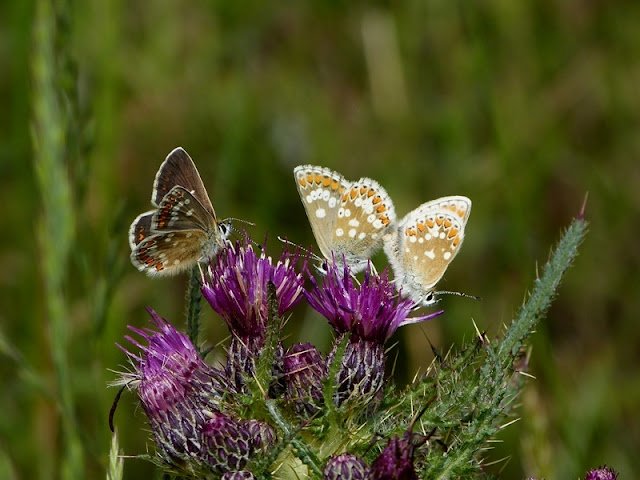 I knew this was a good site for Northern Brown Argus, Aricia artaxerxes, but I have never seen them in such numbers. They are such lovely butterflies and I feel so lucky to have such a great site for them close to where we will be living one day. 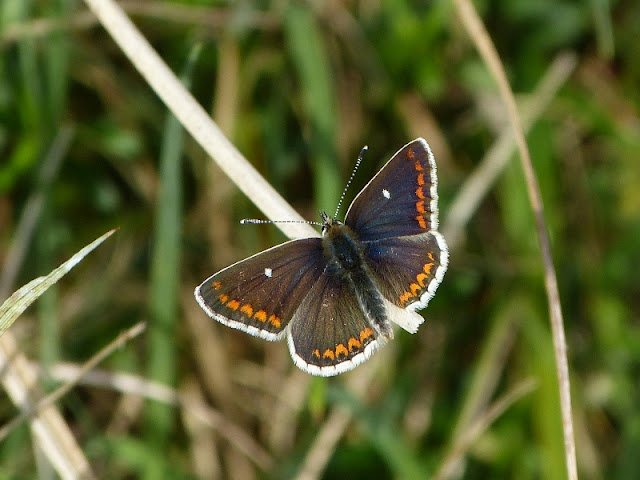 I think I will indulge in another picture!! 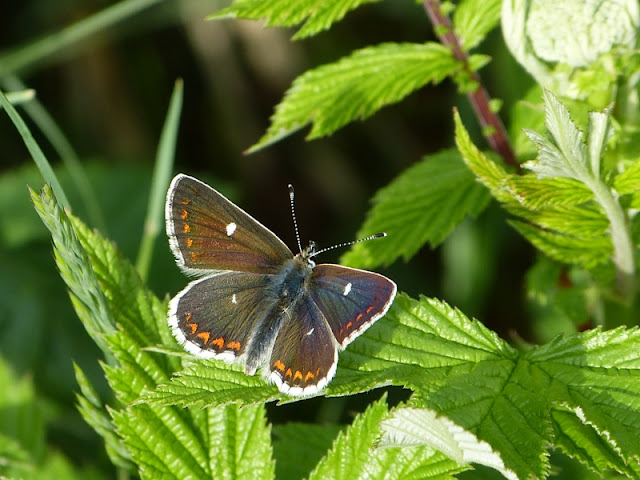 Another thrill for me was the sight of a small orange butterfly - a Small Pearl Bordered Fritillary, Boloria selene, which flew past me and then disappeared. On my way back down the valley I searched through the vegetation and was delighted to find it again. This time it posed nicely for me in the grass. I had thought I had seen one there in the past, but I wasn't 100% sure, so it was good to get a definite identification. 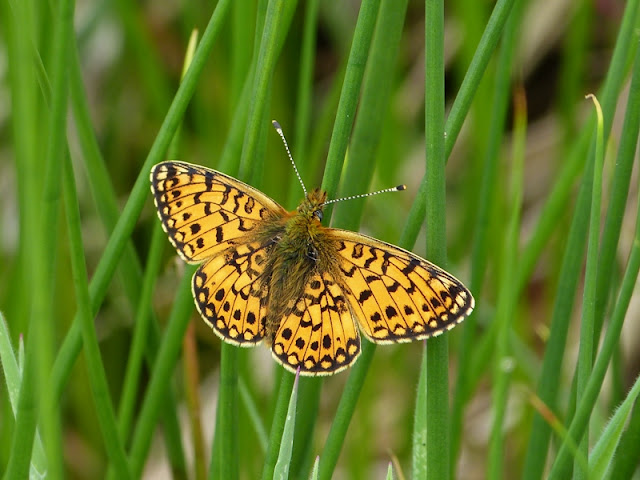 Six days later I took a friend down to the Berwickshire coast where we hoped to see Small Blues, Cupido minimus. Although numbers were lower than we have seen in the past it was great to see these lovely wee butterflies again. 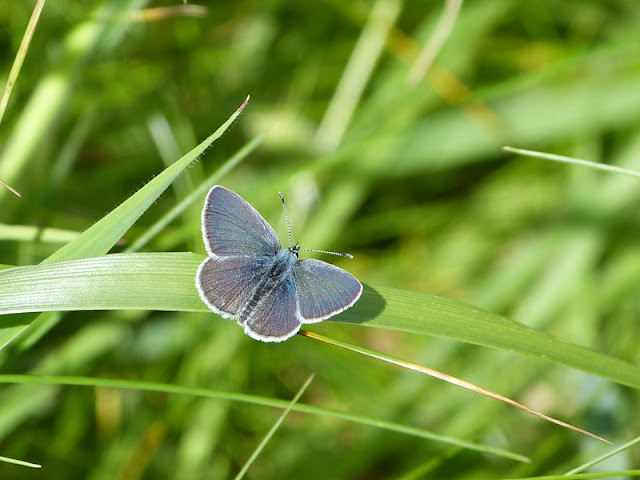 It was quite worrying to see how dried up their food plant, Kidney Vetch, was, not because of the heat but because of the constant North-East wind coming in from the sea. However, we noticed that next to the railway the Kidney Vetch was doing much better out of the wind. 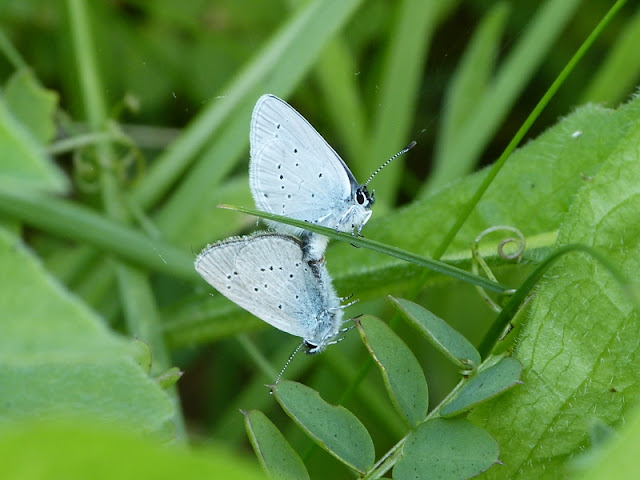 We met the Borders' butterfly recorder while we were there and he showed us where we would see Large Skippers, Ochlodes sylvanus. Despite the wind we were lucky to spot two or three. Two years ago these found their way into East Lothian, but they haven't been spotted since, possibly because the weather has been so poor. 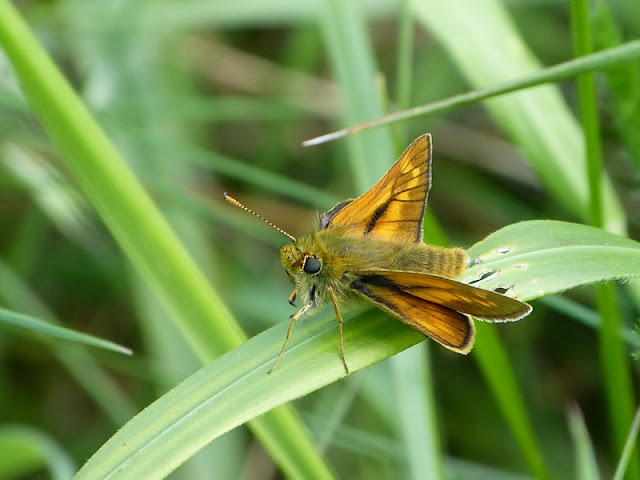 On our walk back I was pleased to see a Wall Brown, Lasiommata megera. We have these in East Lothian, but I still haven't seen one here this year. 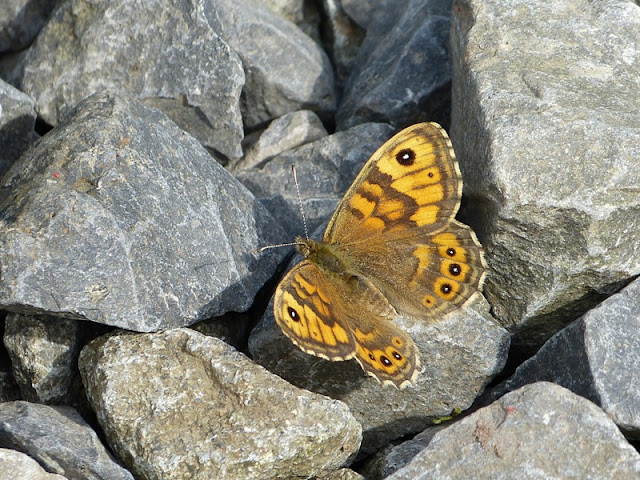 Two days ago on my way back down to Selkirkshire I called into a site near Melrose where I know Scotch Argus, Erebia aethiops, are found. These are a fairly scarce butterfly which are able to fly in dull, wet weather when other species are hiding away. I saw them last year flying in the rain! 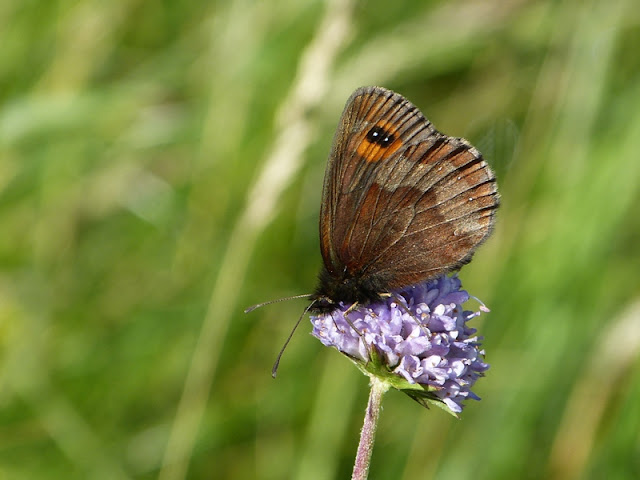 They are so difficult to get pictures of, as they are very easily disturbed and when they land they always seem to go low down in the grass. I was pleased to be able to get the picture above and then delighted when I was walking back to the car to see the butterfly below feeding on a Thistle flower. 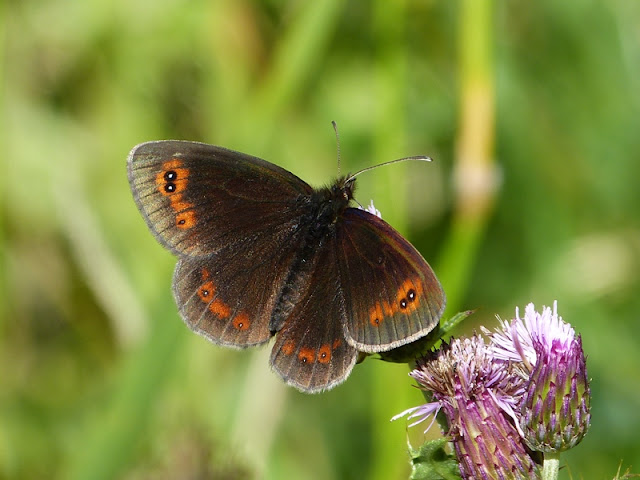 After lunch I returned to the valley above our property where I saw a lot of Small Skippers, Thymelicus sylvestris. This is another butterfly that I thought I had seen before there, but I hadn't seen it for long enough to be sure. It was great to see them in such numbers. 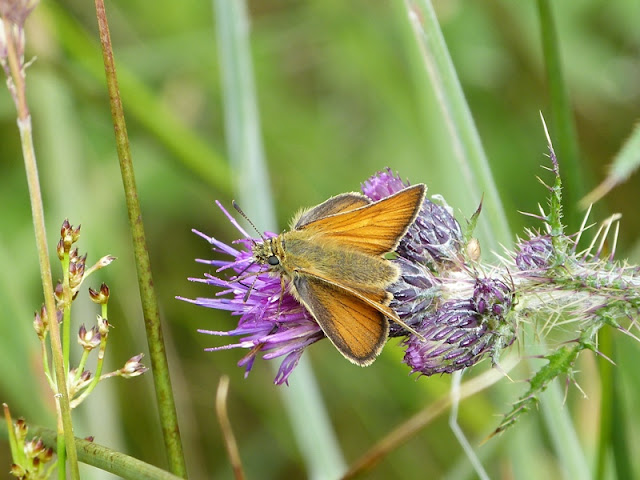 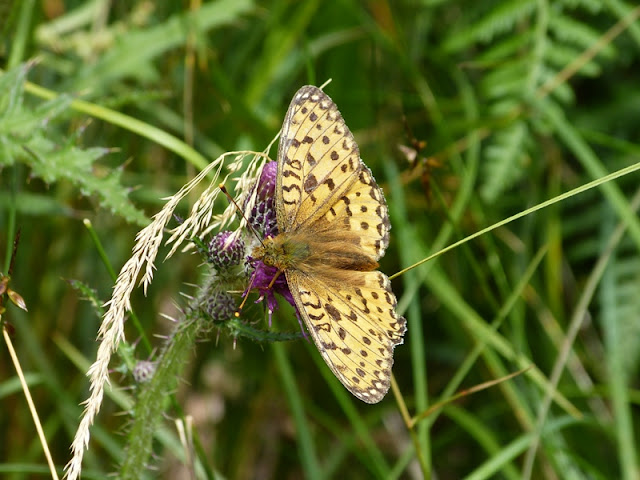 To add a bit of colour there were also Common Blue, Polyommatus icarus, flying among the multitude of brown butterflies such as Meadow Browns, Ringlet and Small Heaths. 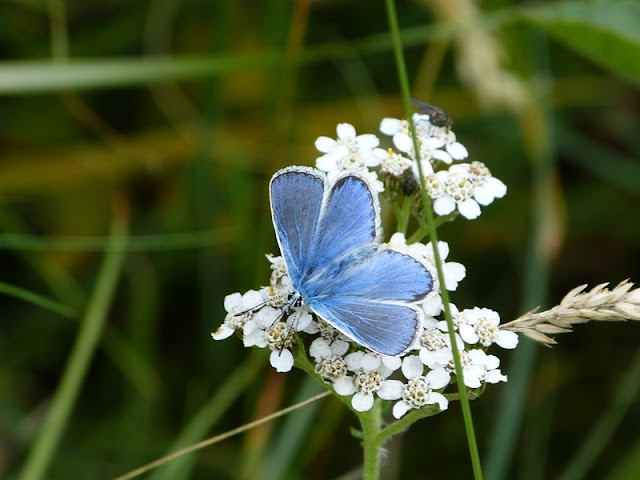 It was great to see so many different butterflies and it is really exciting to think that in a couple of years we will be living in amongst them all!
Posted by Nick Morgan at 20:44 11 comments: