On Saturday my son and I visited Butterfly and Insect World, just outside Edinburgh. It is the perfect antidote to a cold February day after several months of butterfly-less-ness!!
The place isn't enormous, but there is plenty to see for the enthusiast or casual observer. As well as a large greenhouse, full of plants and ponds where the butterflies fly, there is also an area with reptiles, tarantulas and other insects.
You can buy a small Guide to Tropical Butterflies, but it doesn't cover all of the butterflies that can be seen there. I suppose the species that can be seen depend on the chrysalis available.
I have managed to identify most of those that I saw, but there are a few that remain a mystery to me. If anyone knows their names, or if I have made any identifications mistakes I would be pleased to hear from you.

A pair of Blue Morpho butterflies, Morpho menelaus. The upper side of their wings are an amazing blue colour, but of course you can only see that when they fly. One of these was roosting high in a palm tree and another was flying around it. I switched my camera to take a video and almost immediately the male landed and they started to mate.

This is a Banded Purplewing, Myscelia cyaniris, from Central America. Its wings had an amazing purple sheen, depending on how the light hit them. It would land, flick its wings open a couple of times and then close them to roost. The underside of the wings are a dull brown pattern.

This is a Cattleheart, Parides lysander, which is found in much of South America.

I think this is a Doris Longwing, Laparus doris, from Central America.

This is the upper side of the Doris Longwing.

One of my favourite butterflies there was the Glasswing, Greta oto, which occurs from Mexico to Panama. There were quite a lot of them flying around the display.

This is a Goldrim, Battus polydamus, one of the butterflies I saw in St Lucia. 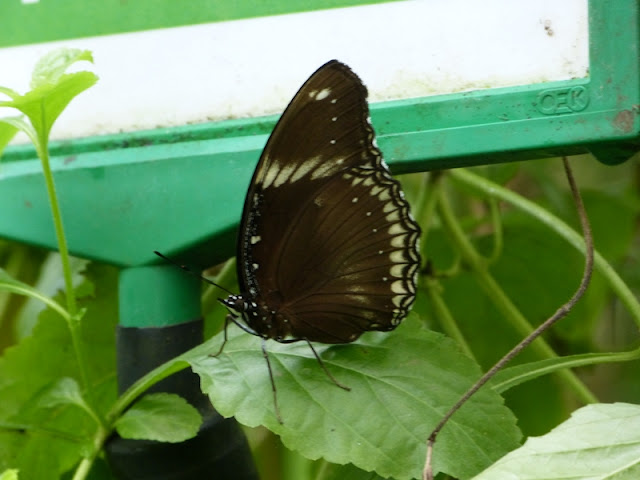 Thank you to Stiletto for identifying this butterfly for me. It is Hypolimnas bolina. I have a picture of the upper side further down this post, which looks completely different. 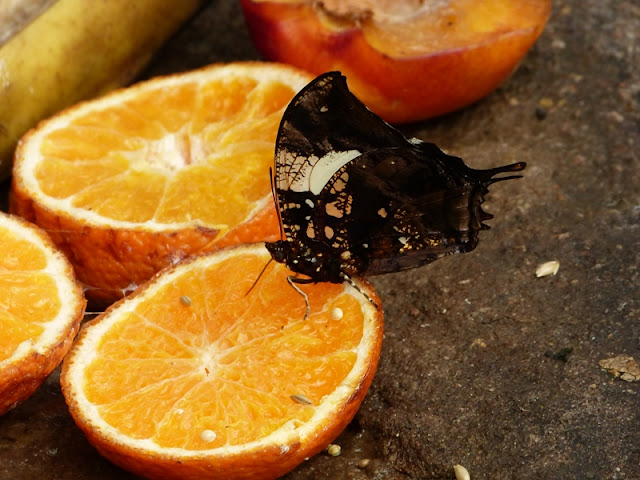 This, I have discovered is a Jazzy Leafwing, Hypna clytemnestra. The upper side of the wings is mostly black, with a white band.

This is a female Low's Swallowtail, Papilio lowi, from the Philippines...

... and this is a male Low's Swallowtail.


One of my favourite of all butterflies is the Malachite, Siproeta stelenes, which occurs in Central and northern South America. I only saw one of these at the display and it seemed to like perching high in the vegetation.

Just before we left we saw a Monarch, Danaus plexippus. Whenever I have seen these in the wild I have always thought they were large butterflies, but in the company of the other butterflies here it seemed quite small!

The Tree Nymph, Idea leuconoe, from South East Asia. There were plenty of these drifting around Butterfly World.

This is the Variable Cracker, Hamadryas feronia, which occurs in the southern USA and northern South America. This one came down to feed on some bananas, but it normally rests flat against tree trunks.

Here are a few pictures from a previous visit.

This is a Common Mormon, Papilio polytes, from Asia.

And this is a Giant Orange Tip, Hebornia glaucippe, also from Asia.

This is a Pink Rose, Pachliopta kotzebuea, from the Philippines.

This is a Scarlet Swallowtail, Papilio rumanzovia, also from the Philippines.

This is a male Mimic, Hypolimnas bolina, which occurs in Africa, Asia and Australia.

I struggled to get sharp pictures of some of these exotic butterflies in the Scottish gloom! I was impressed with the number of different species on display. Initially when we arrived, I thought there were only ten or so species flying around, but the longer we stayed the more we spotted. There were other species that I didn't manage to photograph. I only saw one example of many species, but I am not sure if there were more hiding amongst the vegetation.

There were also a number of chrysalis on display waiting for future butterflies to emerge. I'll put some pictures in a separate post.

More information about Butterfly and Insect World can be found on their web site:
http://www.edinburgh-butterfly-world.co.uk/