Almost every year the first butterfly I see is a Small Tortoiseshell, Aglais urticae. This year I saw one on the 2nd March, and I thought that it was going to be a good start to the butterfly season, but the weather turned for the worst the next day. Temperatures haven't been much above freezing since, and we have had snow showers for the last 12 days in a row! The forecast doesn't look as though things are going to change for the foreseeable future. At least the weather has given me a chance to sort through some of my old photographs. 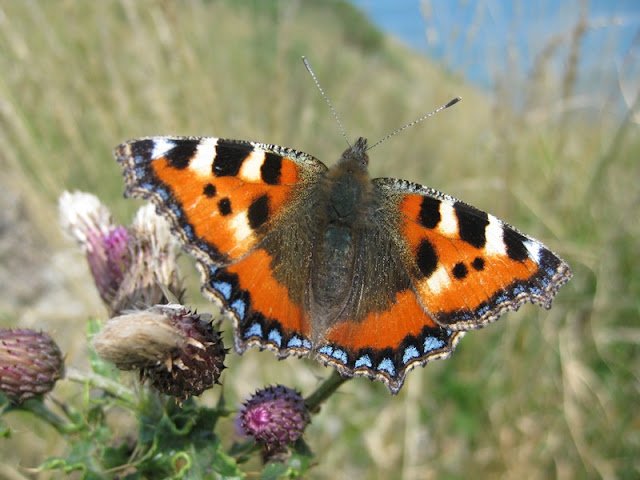 The Small Tortoiseshell was once one of the most commonly seen butterflies in the UK. It can be seen almost anywhere in the British Isles at almost any time of the year. Typically there are two broods. The butterflies that we see at this time of year emerged around about September the previous summer. After the adult butterflies emerge they feed up before finding themselves a dry spot, such as a shed or log pile to hibernate. During mild, sunny days over the winter the butterfly may be seen flying around. This can be a little risky, as there is unlikely to be a nectar source available and the butterfly will needlessly be using up energy.

It is more normal for the adults to start appearing in late March, when there are spring flowers available for them to feed on. These butterflies will go on to lay eggs in May, which will turn into the next generation of butterflies around about July. The July adults pair up very quickly and go on to produce the generation that overwinters. So, the summer brood has a lifespan of about three months while the winter brood has a lifespan of about nine months. 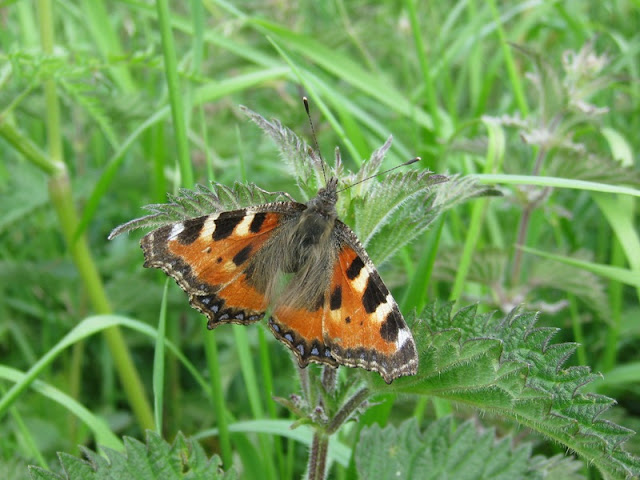 Two summers ago, I was walking our dog along a local farm track and I noticed this female Small Tortoiseshell behaving a little strangely. I watched for a while and realised that she was laying eggs on some nettles alongside the track. 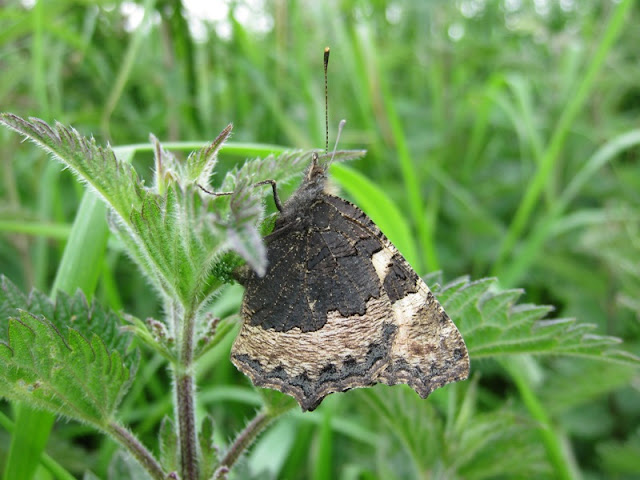 It took her over half an hour to lay this batch of eggs. 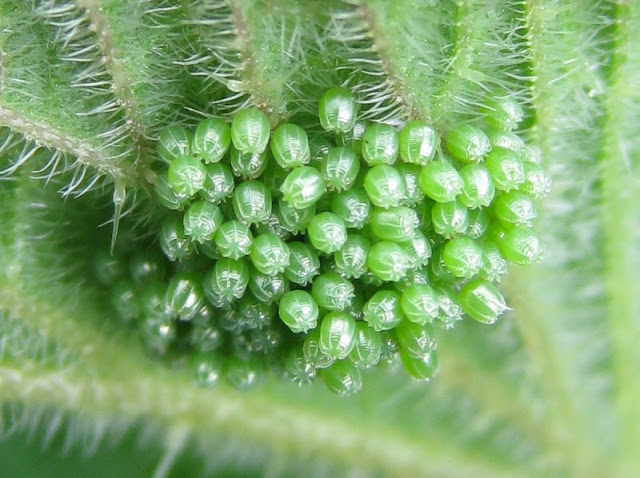 I kept an eye on the eggs for the next few days. The weather turned cool and wet and it took the eggs eighteen days before they hatched. I am sure that they would not take as long in warmer weather. 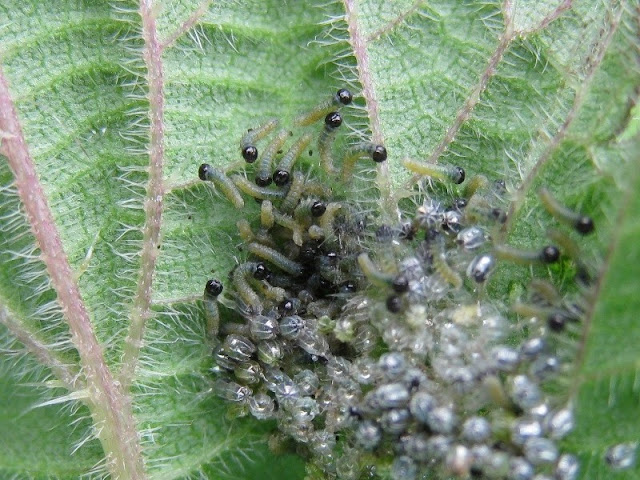 The day after they hatched I went away for a few days and on my return there was no sign of the caterpillars. Sadly, I think they must have perished due to the poor weather.

I regularly see Small Tortoiseshell caterpillars on the nettles along that track. They aren't difficult to spot, as after they hatch they build a communal web towards the top of the nettle plant. The butterflies remain as a mass as they move around the nettles leaving a trail of eaten leaves and droppings. 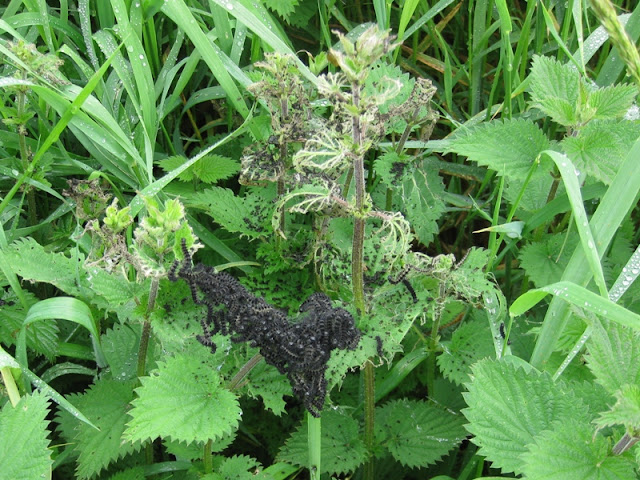 The caterpillars are black with yellow stripes and covered in spines. 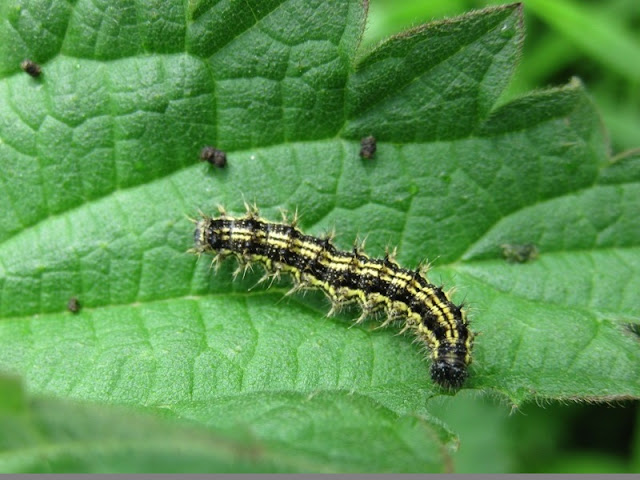 When they reach the final instar the caterpillars have more obvious yellow stripes and they become solitary.

I found the following three prints today and scanned them. They were taken in 2001 when I was working as a Countryside Ranger at John Muir Country Park, near Dunbar, Scotland. I have checked my notes and notice that I spotted the freshly hatched caterpillars and 21 days later they turned into chrysalises. It was interesting that most of the chrysalises were a beautiful shimmering gold, but there were a few dark brown ones, too. Most of them were attached to the stems and leaves of the nettles close to where they had been feeding, but others had climbed a close by shed and formed chrysalises under the eaves of the roof. 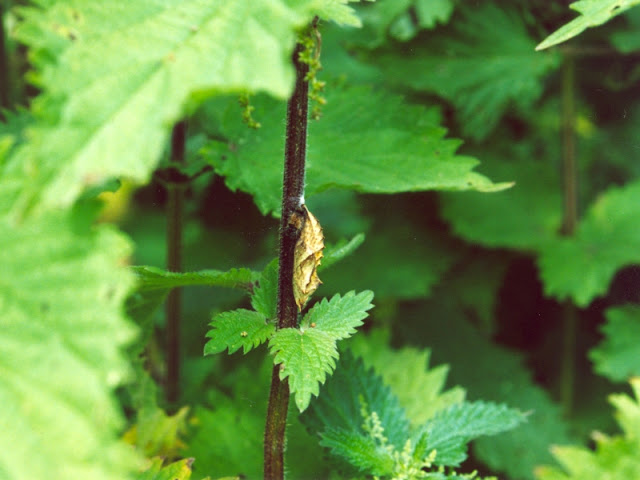 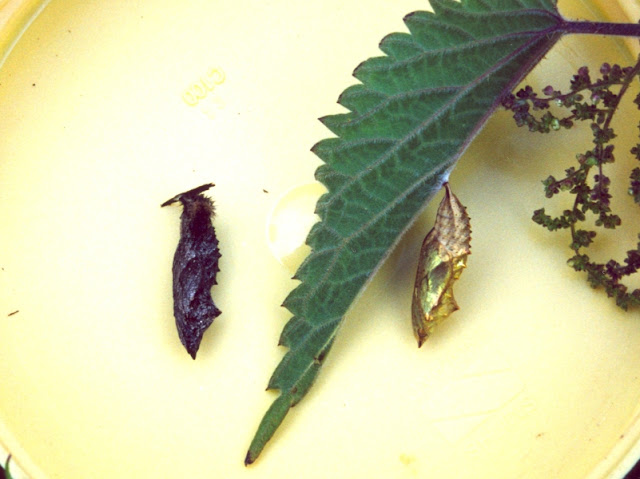 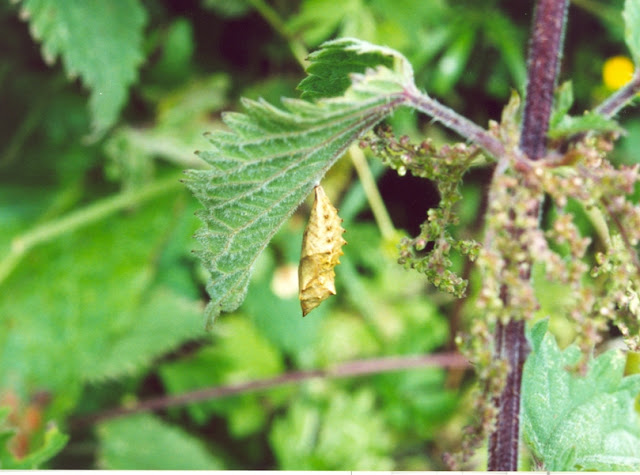 I noted that after 18 days the adult butterflies eclosed.

I said at the beginning that the Small Tortoiseshell was once a very familiar butterfly here in the UK. Unfortunately its numbers have been declining in recent years. It isn't known for sure what is causing this, but the best theory is that climate change has allowed the parasitic fly, Sturmia bella, to expand its range into the UK. This fly lays its eggs on the nettle leaves that the butterflies are feeding on. The eggs are ingested by the caterpillars and the larva of the flies slowly consume their hosts. It seems that the biggest impact on Small Tortoiseshell numbers has been in southern England and here in Scotland the population is remaining stable. 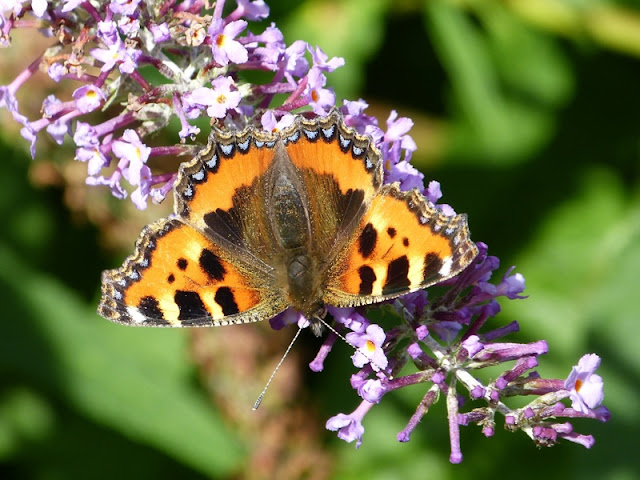 Hopefully this cold weather will soon come to an end and I'll be seeing Small Tortoiseshells and other butterflies out and about.
Posted by Nick Morgan at 14:47