Following on from my previous post I have been continuing to read up about the butterflies that have recently been recorded in East Lothian. It would seem that many of the "new species" found in East Lothian in recent years did once occur here in the past. 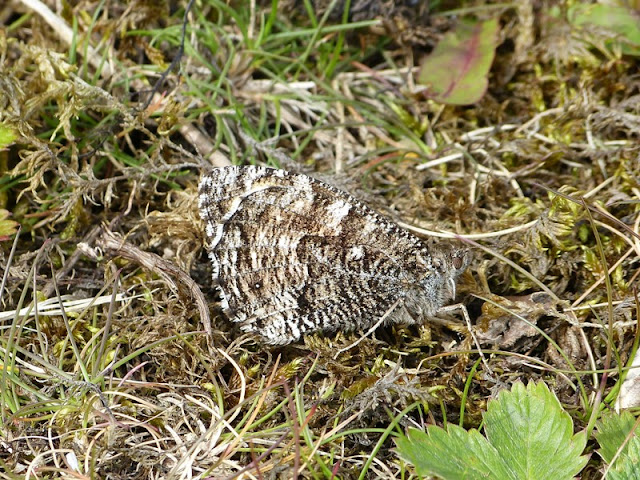 I can find very little information about the distribution of the Grayling in East Lothian. "The Butterflies of Scotland" shows some records on the east coast of East Lothian between 1900 and 1980, but it says that the Grayling has been lost from many of its inland sites. The 1970 "Provisional Atlas of the Insects of the British Isles" showed it to no longer occur here. I found a stray Grayling in East Lothian in 2001, but the first recent records of it breeding here are from 2005 at the western side of East Lothian. I have also received records of it occurring in a remote valley or "cleugh" in the Lammermuir Hills. However, I wouldn't be surprised to learn that it has been around for a lot longer, unnoticed in some remote location. Certainly it has become more numerous in the few sites it is now found in the last five years. 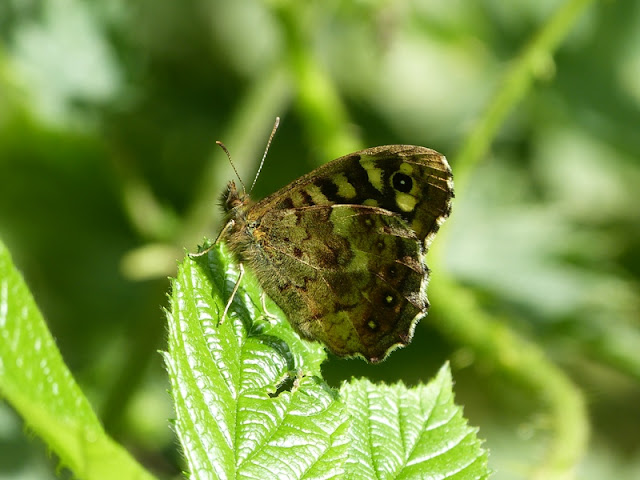 Recorded around Edinburgh in 1811, but another species that disappeared from Edinburgh and the Lothians in the mid 1800s. By 1970 it no longer occurred in the North of England. It was first recorded back in East Lothian in 2009 having spread north up the east coast from the Scottish Borders. Since then it has continued to extended its range, now being commonly found right around the coast and in many wooded areas inland in East Lothian. 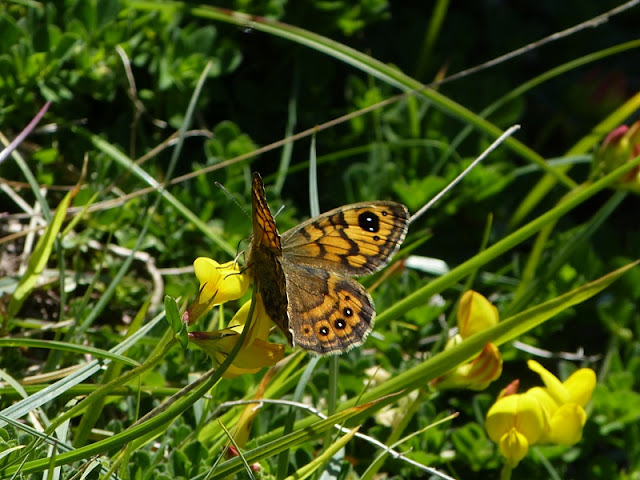 Again, it seems that this butterfly was found in much of Scotland in the early Nineteenth Century. It appears that it was reasonably common until it was wiped out after a series of cold summers from 1860. Thereafter only occurring in the south west of Scotland. It was first recorded in East Lothian again in 2010 arriving on the east coast and it has since worked its way around much of the coast. 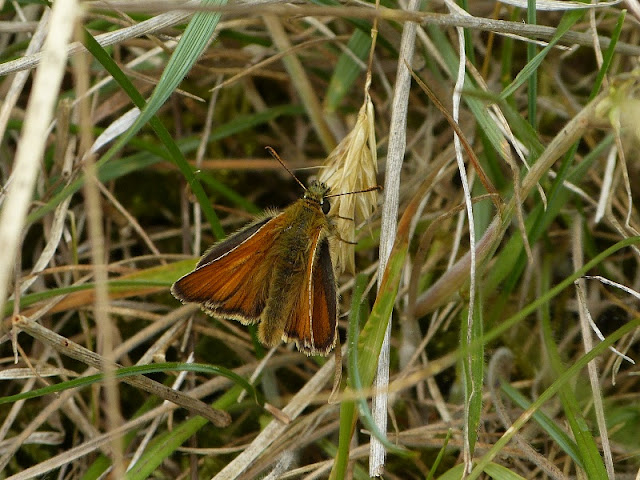 There are a couple of dubious records of the Small Skipper occurring in Scotland, but it is thought these could be mis-identification. The first records of the Small Skipper in East Lothian were from the Aberlady area in 2011. Since then it has slowly spread westwards along the coast as far as Levenhall and in 2014 it was also found at a couple of inland sites. There seems to be no obvious pattern to where they have been found here. It could be that, unlike many other species, they have come around the western side of the Lammermuir Hills.

There are three more species of butterflies that have recently been found in East Lothian. I will put details of them in my next post.

We only have 25 different species of butterflies here in East Lothian. However, thirty years ago there were only about half that number. I have always been interested in why we have recorded so many new species here in recent years. Is it because we are putting more effort into searching for the butterflies, or are these genuine increases in the range of these species?

Recently I was lucky enough to find a second-hand copy of "The Butterflies of Scotland" by George Thomson.  This was writen in 1980 and I was keen to see the distribution maps and compare them with those in the 1970 "Provisional Atlas of the Insects of the British Isles" and with the current distribution maps produced by Butterfly Conservation. However, I was delighted to discover that the author has also included the history of records for each species going back to the early 1800s.

I have been spending hours reading this book and learning about how the distribution of many species of butterflies has changed over the years. Some of what I have read confirms what people have told me but there were a few surprised in there too! 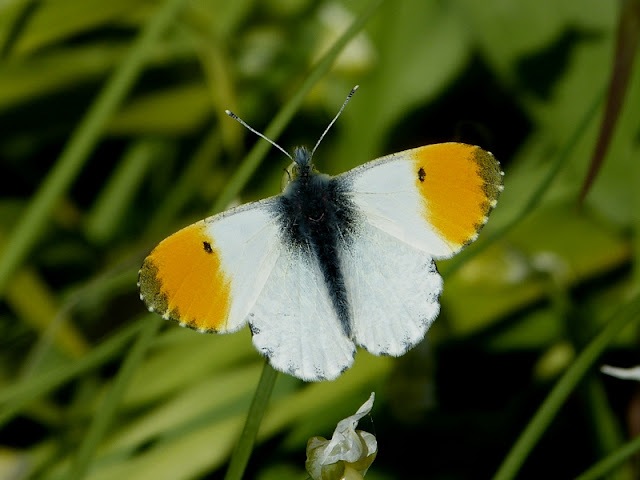 I will start with some now common butterflies. The Orange Tip, Anthocharis cardamines, is said to have been widespread throughout southern and east Scotland in the early 1800s and it remained so until the 1880s, but after that its range contracted to south west Scotland. In about 1950 it was considered to be advancing back towards the Lothians. The map in Butterflies of Scotland shows it occurring in South-west Scotland and the Highlands, with one or two records in between. My boss, who was a countryside ranger in the 1970s says he remembered them only being along the River Esk in the west of East Lothian. Since then they have spread and they are now commonly seen in the spring across much of East Lothian and Scotland. 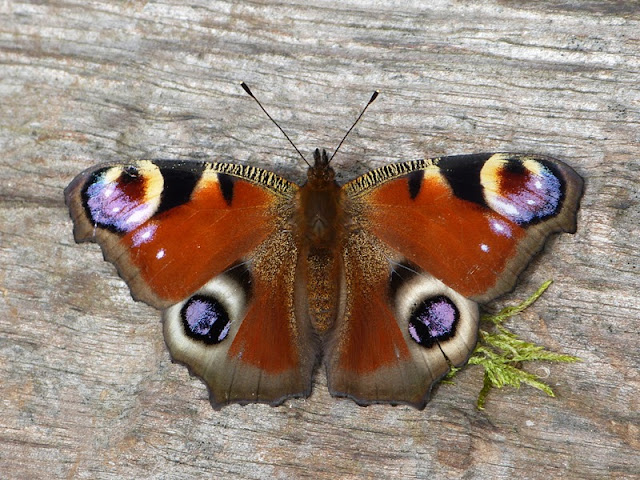 The Peacock, Aglais io, was recorded in south west Scotland in the 1700s and it continued to be recorded there through the 1800s with sporadic records across Scotland. However, by the start of the 1900s it was becoming rarer. It is thought that small colonies persisted on the west coast of Scotland, but that other records from around Scotland were migrants. Records started to pick up again in the 1950s and since then it has continued to spread across Scotland. It wasn't until the 1980s that it was found in East Lothian. 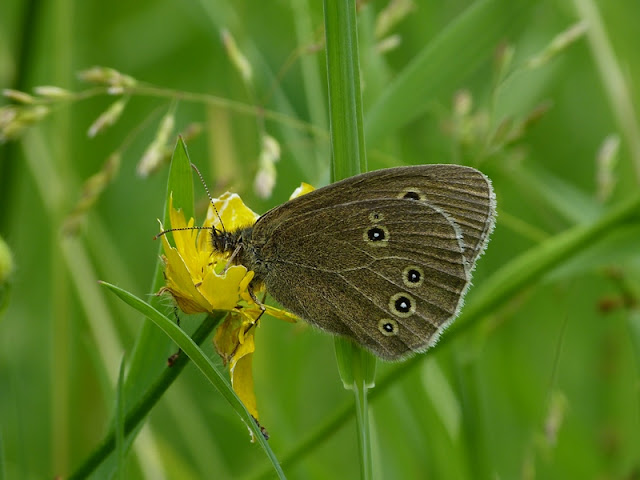 Ringlets, Aphantopus hyperantus, were said to be abundant in East Lothian in 1852, but by the end of that century they were becoming scarce. The last record from East Lothian around that time was in 1928. It was recorded again in 1984 in the east of East Lothian and has since spread across the whole county, now being common and numerous. 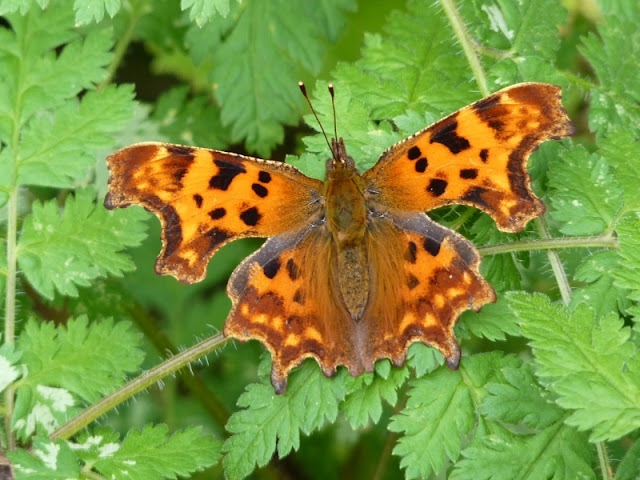 There are records of the Comma, Polygonia c-album, occurring in Southern Scotland, and up to Fife in the 1850s, but after that its range contracted until in 1920s it was only regularly occurring in the southern half of England. From around the 1980s it underwent a rapid expansion and reached the Scottish Borders in the 1990s and was first recorded again in East Lothian in 2001. Since 2006 it has become established here and has slowly become more numerous.

So, three of these species were certainly in East Lothian in the early 1800s, and most likely the Peacock was also occasionally found here then, too. Now the question is not so much why they occur here now, but why they moved away and then returned. I will have a look at the other more recent arrivals in East Lothian and see if I can find information about the weather during this period. More to follow...
Posted by Nick Morgan at 21:05 12 comments: