We had three species of butterflies that were resident in the garden of the villa we were staying in. I have always noticed Long-tailed Blues, Lampides boeticus, flying around the garden there, but it was only this year that I realised that they were laying eggs on a bush in the garden, which I now think is Polygala myrtifoli. 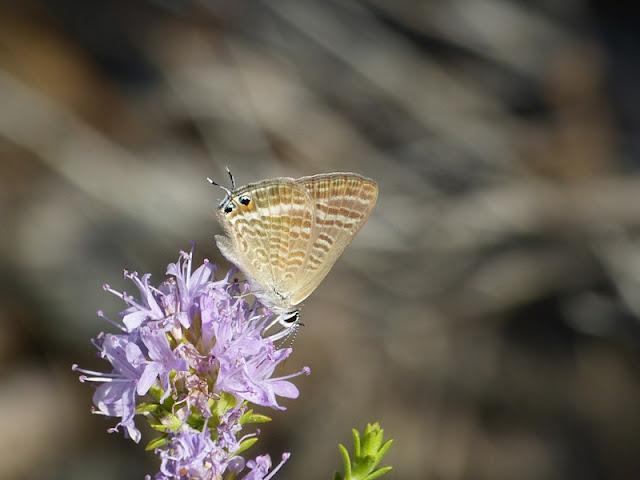 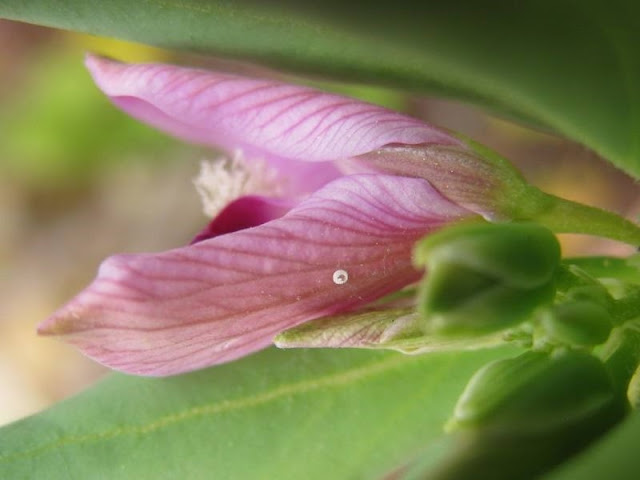 I have previously found the eggs and caterpillars of Lang's Short-tailed Blues, Leptotes pirithous, on a Plumbego bush in the garden. This year I could find plenty of eggs, but I didn't find any caterpillars. I suspect that they may have been inside the flower buds judging by the holes I found. 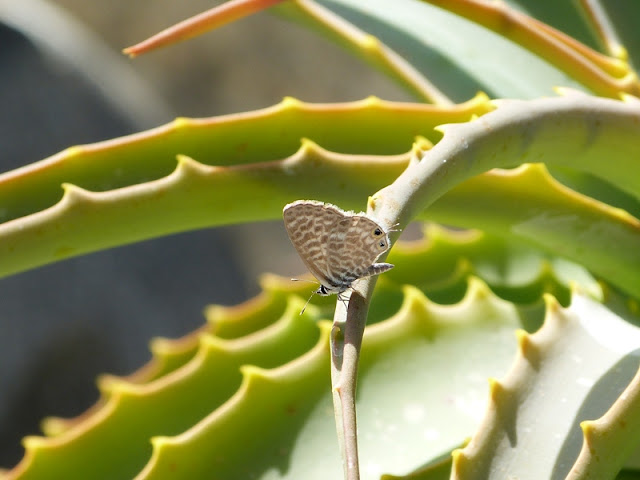 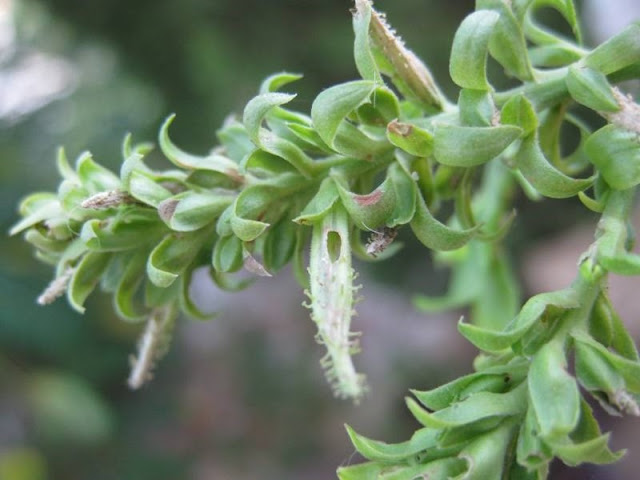 There seemed to be more Geranium Bronzes, Cacyreus marshalli, than in previous years. This was confirmed by the number of eggs I found on the Geranium flowers around the garden. Most flower heads had at least one egg on it. 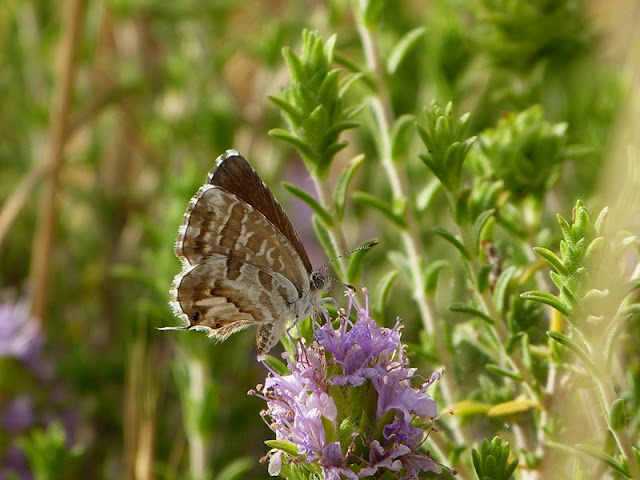 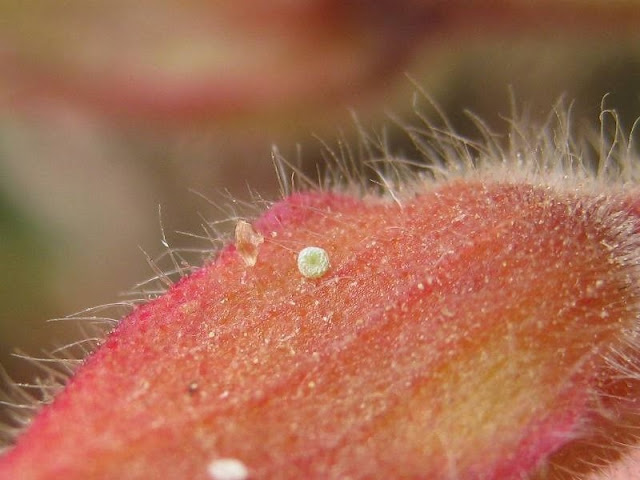 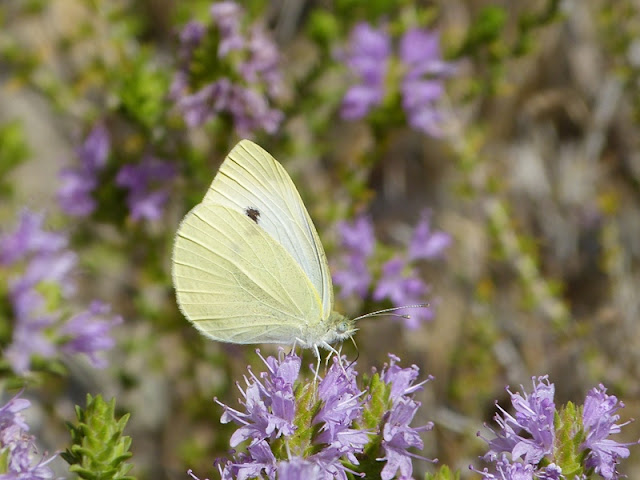 No trip to southern Spain would be complete without me seeing an African Grass Blue, Zizeeria knysna.  I usually see them down by the river, but this year it took two visits to the Rio Guadalhorce before I saw one. I later saw some on the banks of the lakes at Emblase de Guadalhorce. 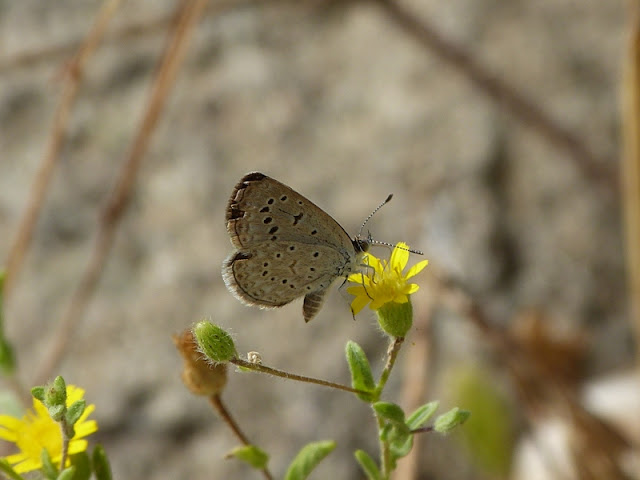 While I was there I briefly saw a Speckled Wood, Pararge aegeria. 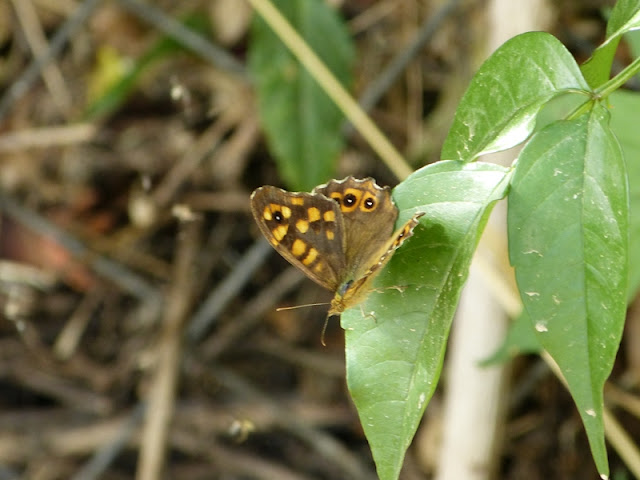 There was also a Bath White, Pontia daplidice, flying among the grass there. 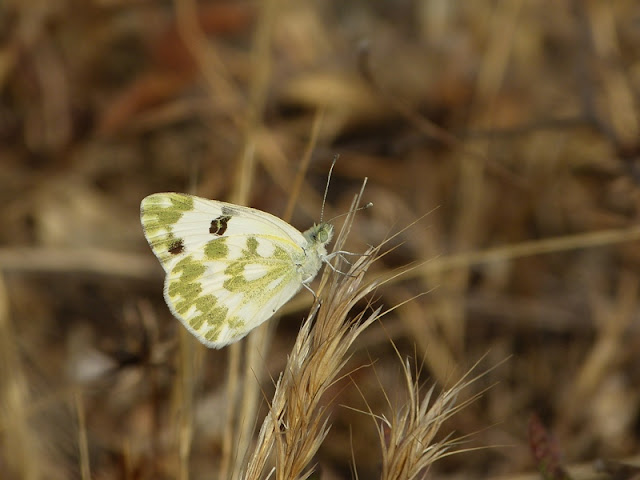 On our last full day at the villa I thought I would walk further along the road to see if I could find any other sites similar to my favourite butterfly spot. A couple of kilometres further up the hill I saw a track heading up into the olive groves, so followed it.

It was a worthwhile detour as almost immediately I saw a Painted Lady, Vanessa cardui. 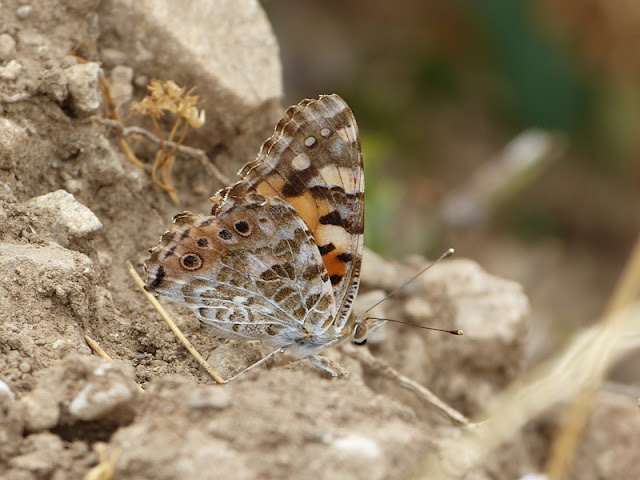 There were a lot of Common Blues, Southern Brown Argus and Bath Whites flying around the few bits of green vegetation at the side of the track along with a little Red-underwing Skipper, Spialia sertorius. 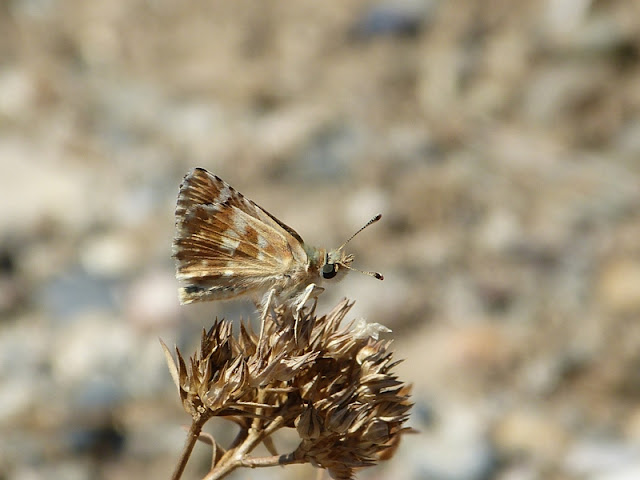 Under an old olive tree I saw a couple of butterflies having a bit of a squabble. They turned out to be a Meadow Brown, Maniola jurtina... 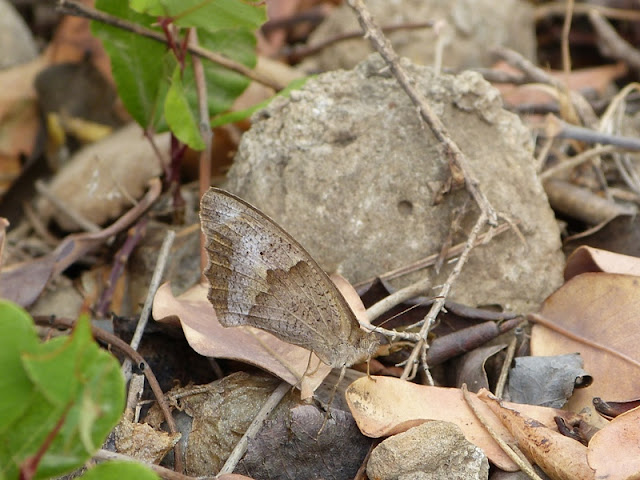 And a Small Heath, Coenonympha pamphilus. This is the summer form that occurs around the Mediterranean. 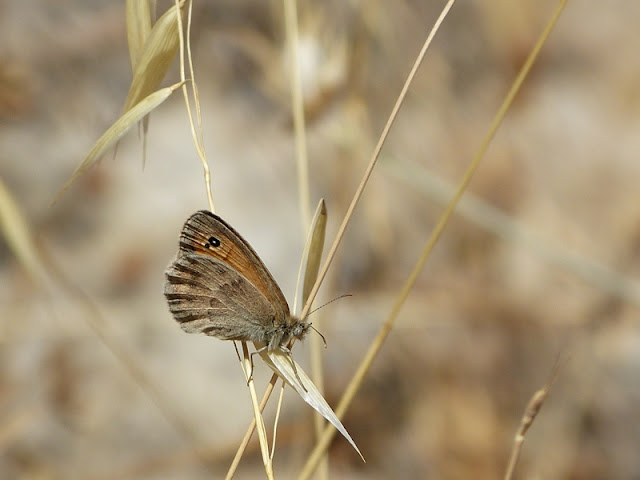 On a trip to walk the Caminito del Rey I only saw Speckled Woods and Bath Whites, which was a little disappointing as I thought there may have been various species of Graylings there. 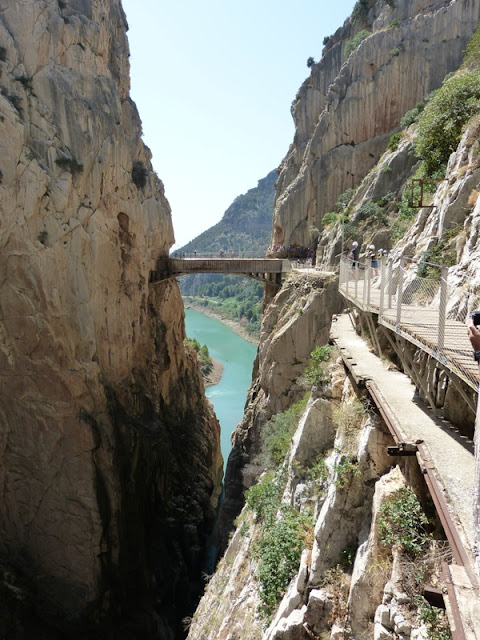 However, a trip to the Sierra Nevada was fantastic. I will be posting about that in the next week or two.
Posted by Nick Morgan at 18:06 10 comments:

From the 1st to 15th July this year we had our annual family holiday in a villa 45 kilometres north west of Malaga. This is the third time we have holidayed there, coincidentally being there for exactly the same dates in 2012 and 2014 previously.

The holiday went off to a really good start, with me seeing a Small White, Pieris rapae, as we were driving out of the airport and then a Plain Tiger, Danaus chrysippus, flew across the road in front of us.

There is an area that I tend to walk to each day to look for butterflies just a little way up the road from the villa we rent. Over the previous two years I have learned that this is the best local spot to find them. Probably the most common butterfly there is the Southern Gatekeeper, Pyronia cecilia, although they weren't as numerous as the first year we visited. 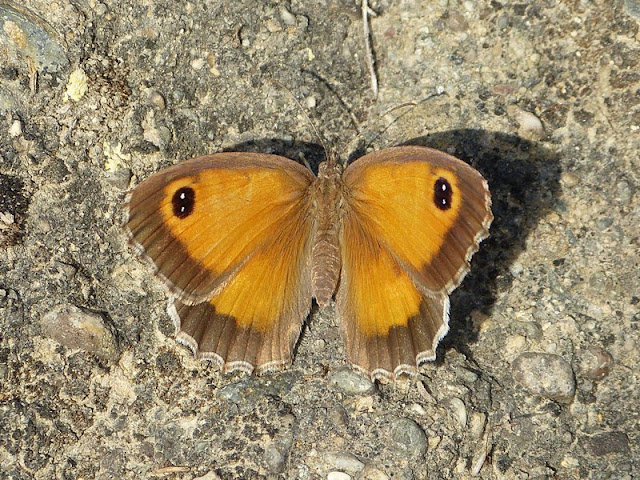 Dusky Heaths, Coenonympha dorus, are beautiful little butterflies with the line of silver scales along the edge or their wings. They always seem to be flying around this area. 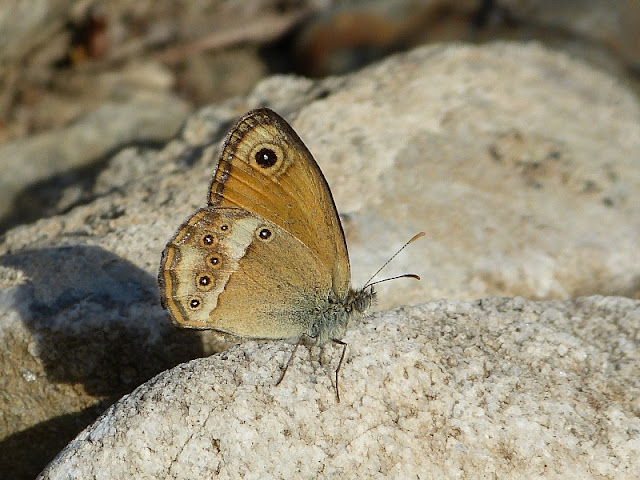 The track turns into a feint path that climbs along the ridge of the hills through olive groves. On the exposed parts of the path male Wall Browns, Lasiommata megera, take up territory, chasing after any other butterflies or large insect they see. 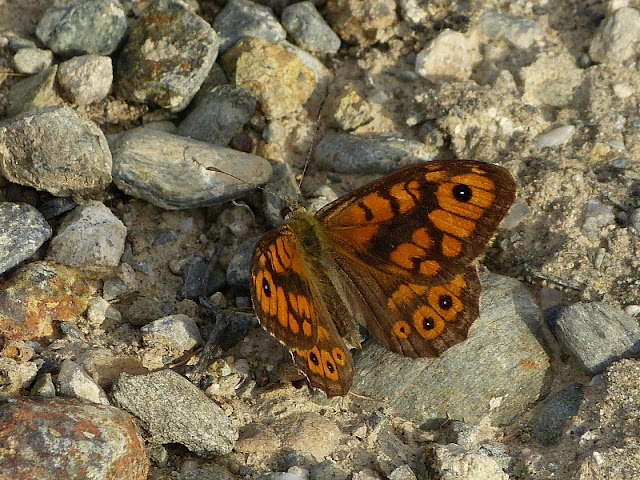 Common Blues, Polyommatus celina, were the other butterfly that could be relied upon to be there each day. They seem very much smaller than those that I see back home. I wasn't sure if I was just imagining this, but I also remember when I saw a Small Copper, Lycaena phlaeas, how much bigger it looked than the Common Blue. The two species are more-or-less the same size back home. 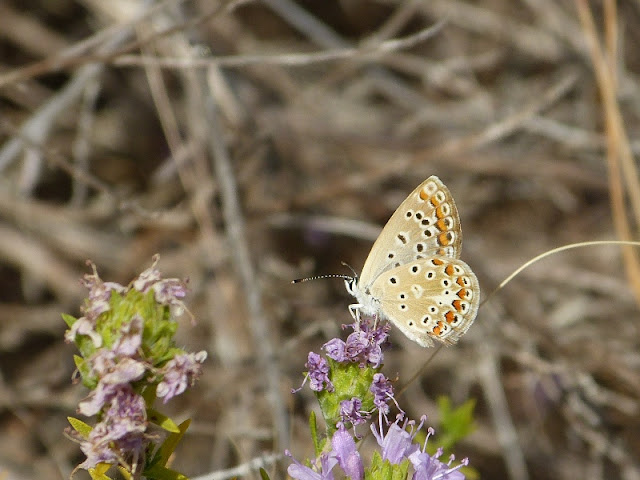 I only saw a Small Copper once this year. It seems to be a very widely distributed butterfly, but it's never seen in great numbers. 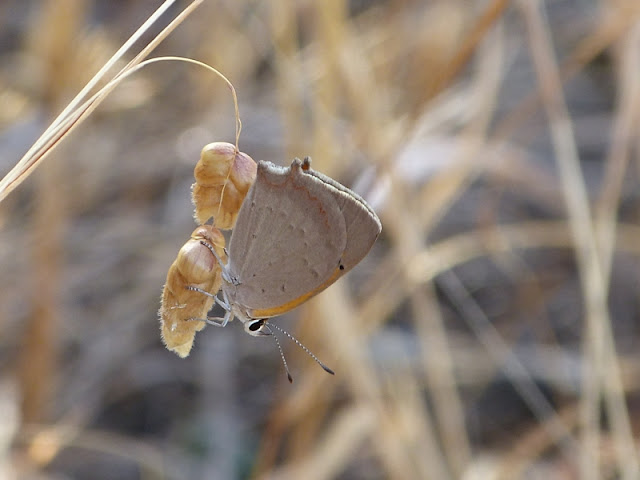 I was delighted to see a Striped Grayling, Pseudotergumia fidia, on the first day I walked up the path. It was there again in exactly the same place the second day too, but I didn't see it after that. Two years earlier I saw a lot of them in the next valley, but have never seen them at this spot before. 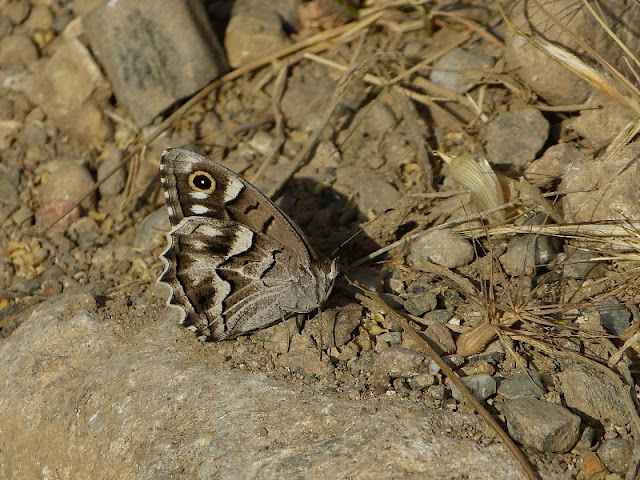 Mallow Skippers, Carcharodus alceae, seemed to have small territories along the road to the villa chasing after anything that flew anywhere near them. 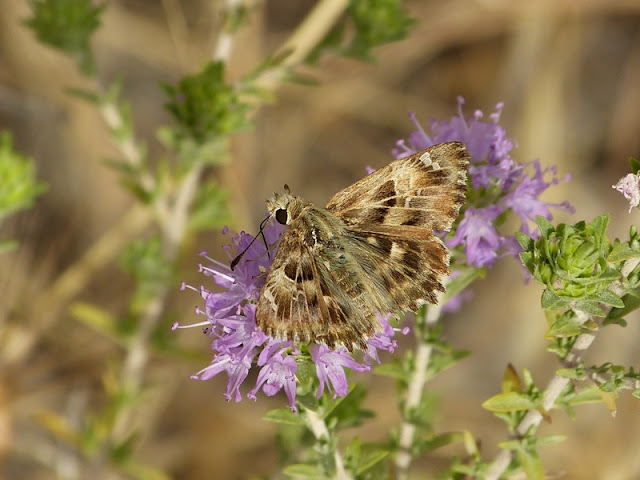 Up the track, on the wild Thyme, Sage Skippers, Syrinthus proto, were doing the same thing. 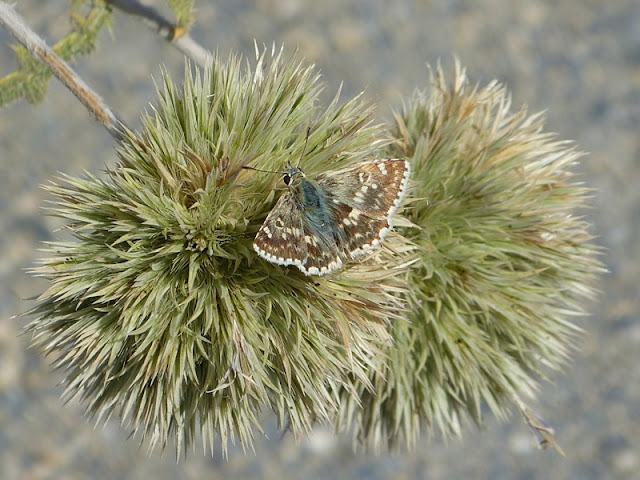 On a couple of occasions I saw a Mediterranean Skipper, Gegenes nostrodamus. I saw this species very briefly for the first time two years ago. 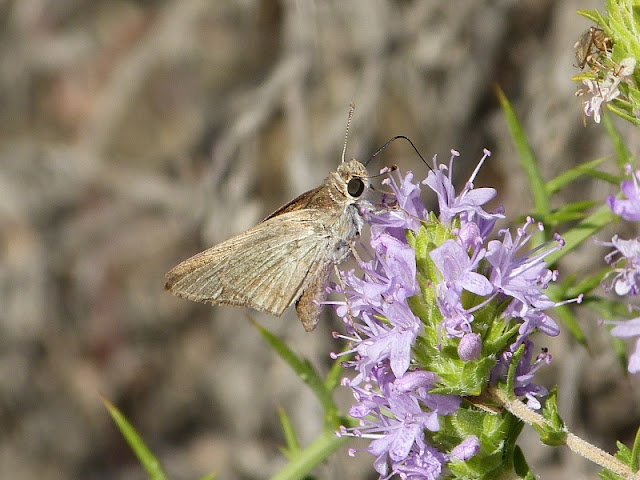 Other butterflies that I saw occasionally were Clouded Yellow, Colias crocea,
... and Bath White, Pontia daplidice. 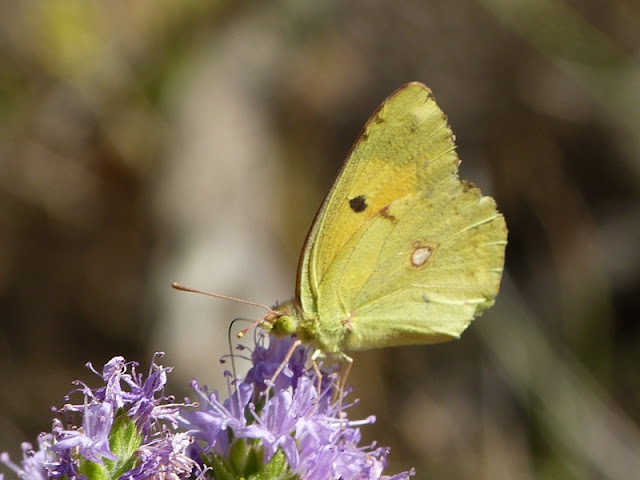 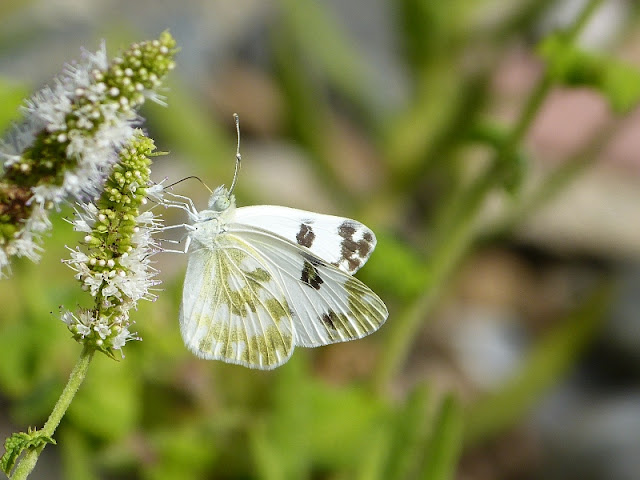 The Southern Brown Argus, Aricia cramera, is a beautiful little butterfly, which I regularly saw flying among the wild flowers. 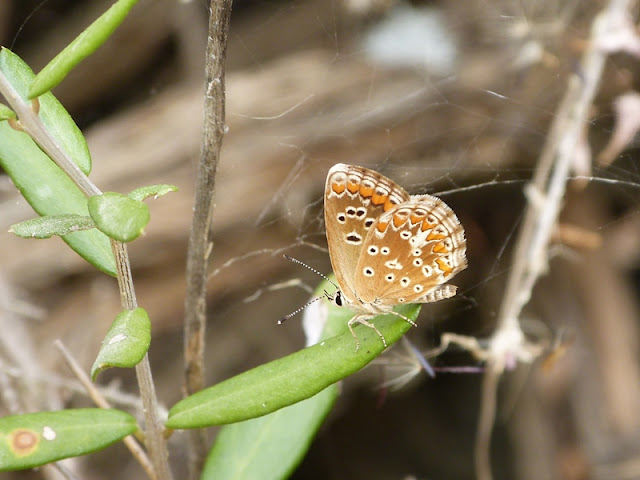 I'll continue with the other butterflies I saw in my next post.
Posted by Nick Morgan at 17:34 8 comments: