The Fall and Rise of the Wall Brown

While I was delighted to see the arrival of the Wall Brown, Lasiommata megera, in 2010 and its subsequent spread across East Lothian I note that it has declined severely in Southern England. Strangely, it is hanging on around the coast of England, but since the mid-1980s, what was once a very common butterfly has become a rare sight in an area centred around Buckinghamshire and Oxfordshire. 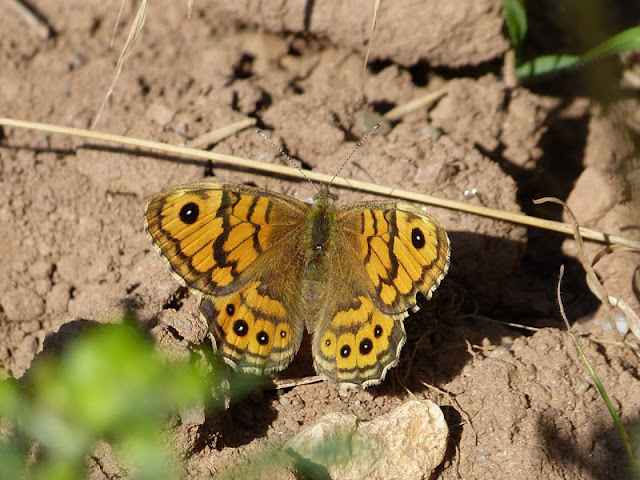 The Wall Brown normally produces two generations of butterflies a year. The first generation emerges in May and June and a second generation occurs in August and September. This species over-winters as a caterpillar. 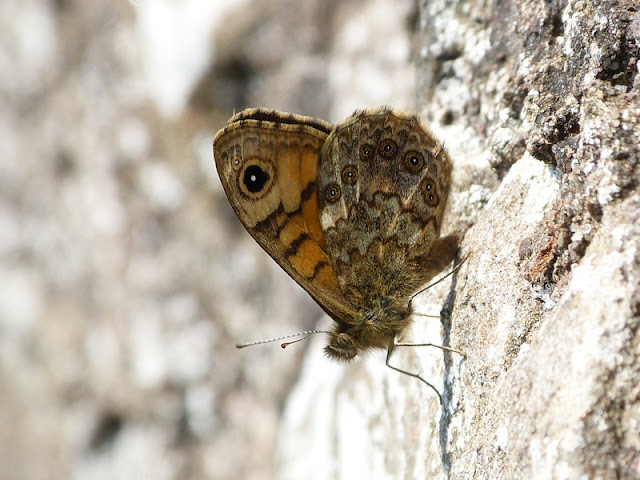 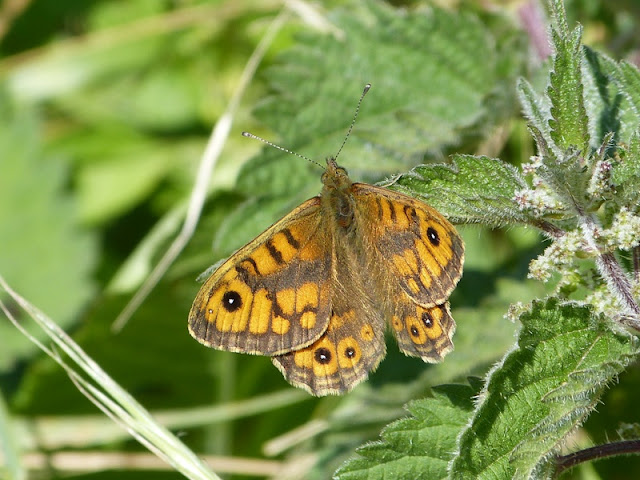 Their theory is that due to climate change the season for this butterfly is extending. If the first generation is emerging earlier and the subsequent generation is therefore appearing earlier then there is a potential for a third generation to emerge late in the season. However, there is not enough time for this third generation to breed, or for their eggs to hatch in time to make it through the winter. Presumably, eggs and chrysalises can’t survive frosts. It would be interesting to know if all instars of the caterpillar can survive cold weather. 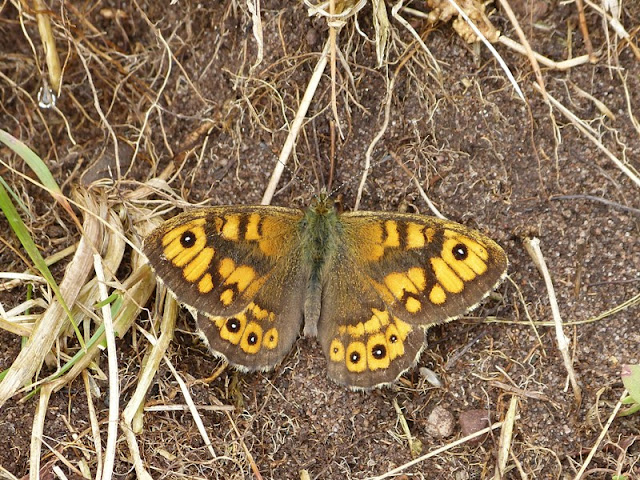 This theory sounds very plausible to me and it could also help to explain why the Wall Brown is now spreading north into East Lothian. We have certainly been experiencing less severe winter weather here over the last 20 years. Possibly before that our season wasn’t long enough for two complete generations to survive and go on to produce caterpillars before the winter set in. In effect we are now experiencing the sort of weather that was once more common in the Home Counties. 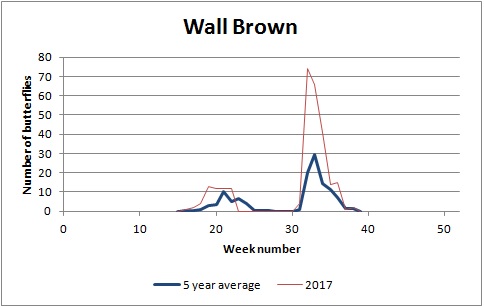 2017 was the best year we have had for Wall Browns. The number of records I have received has increased each year since they were first recorded in East Lothian in 2010. Last year we recorded more than twice as many Wall Browns as we had in 2016. They have now made their way right around the coast and to various inland sites. 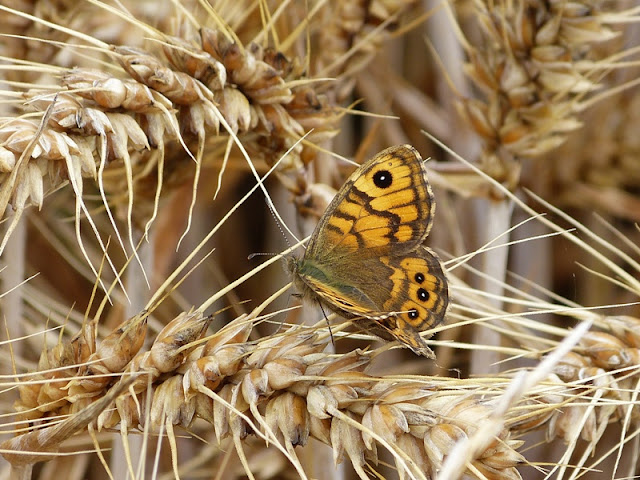 They are a very welcome addition to the butterflies of East Lothian.
Posted by Nick Morgan at 21:02 25 comments:

In a previous post I explained how the Speckled Wood, Pararge aegeria, had arrived in East Lothian in 2009 and then colonized much of the county over the next five years. Well, I am pleased to say that they are continuing to do well. In fact in 2017 they were the secondly most commonly recorded butterfly here. 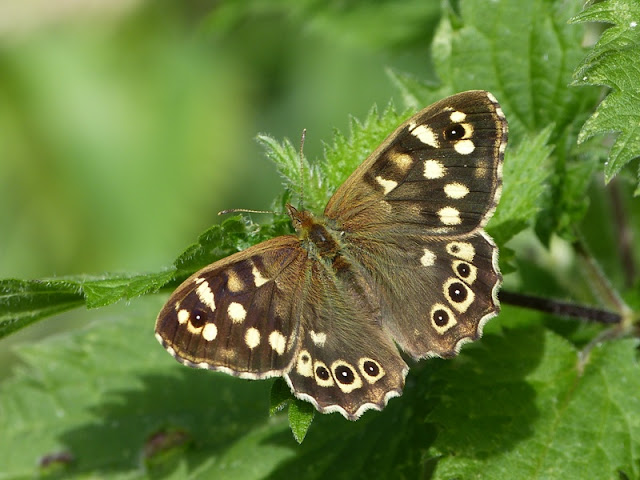 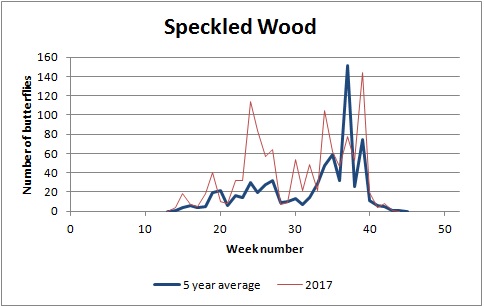 You will see that Speckled Woods did exceptionally well in the spring, but the poor weather in June and July impacted on their numbers. However, they made a bit of a resurgence later in the year.

Looking further back, the number of Speckled Woods recorded in East Lothian has shown a steady increase since they were first recorded in 2009. 2014 was a very good year for many species, and Speckled Woods did particularly well then, but even with the poor start to the summer we had in 2017 they did better than ever.

I have been mapping where Speckled Woods have been recorded and the previous maps are shown on my earlier post. This year the Speckled Wood has continued to spread and it can now be assumed it occurs anywhere there is suitable habitat in East Lothian. 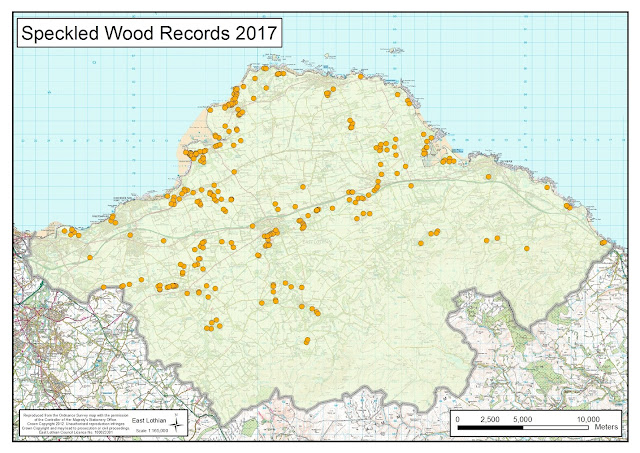 It is interesting that in a year when many species of butterflies have done so badly, this species has done well. The new arrivals in East Lothian appear to be getting on better than many of the species that have occurred here for many years. 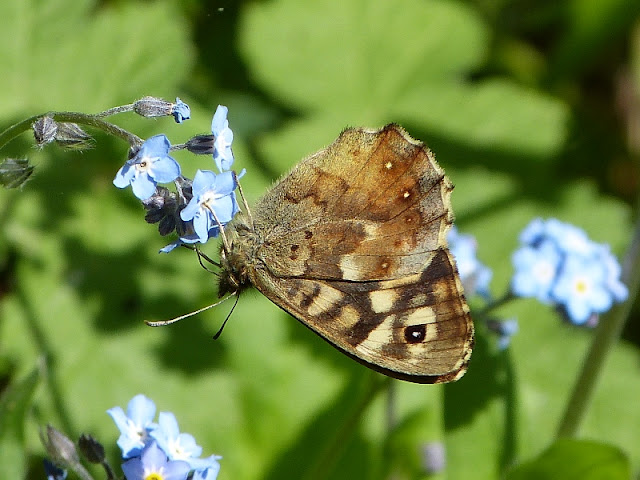