I find co-ordinating the local butterfly records really interesting. I hear first-hand about rare species that have been spotted and occasionally about something new. However, because more people are sending in records each year, I wonder if I am getting a false impression about how well the butterflies are doing here.
The UK Butterfly Monitoring Scheme operates a system of butterfly transects, which give a much better picture of how the local butterflies are doing. Each week between April and September I walk a set route near where I work and I count the number of butterflies I see within an area five metres in front of me and two and a half metres to either side.
I started my transect four years ago after noticing how many butterflies there were in a meadow where I often walk during my lunch break. I was a little disappointed when half way through the year the weather took a turn for the worse and the number of butterflies reduced accordingly. The following year it was even worse!
Last week I plotted the results of the last four years transects onto graphs and I noticed an interesting correlation between the number of butterflies and the weather at the time.
On the graphs below, week 1 is the first week in April and week 26 is the last week in September. Normally butterflies will start flying in April and peak about in the middle of May, there is a quiet period in June and then the summer species come out peaking again about the end of July. 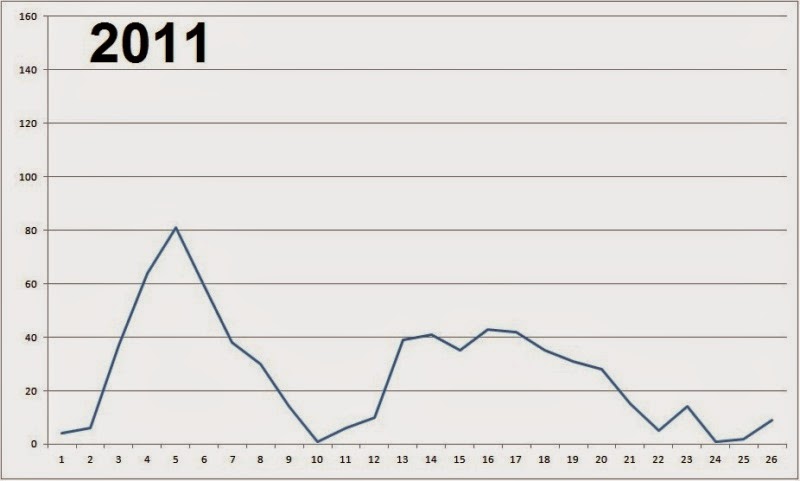 In 2011 we had a great spring, but a horrible cold, wet summer. You can see that the butterfly numbers picked up well, but then dropped off when the bad weather hit. I counted a total of 506 butterflies that year. 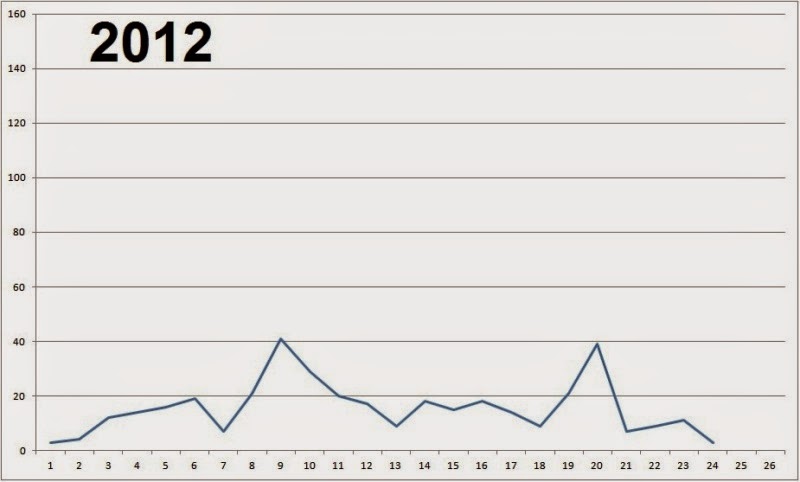 2012 was the worst year I can remember. It seemed to rain almost every day! I was surprised to see any butterflies on the few occasions when the sun came out. However, you can see that the number of butterflies was considerably down on normal. I only 361 butterflies on my transect that year. 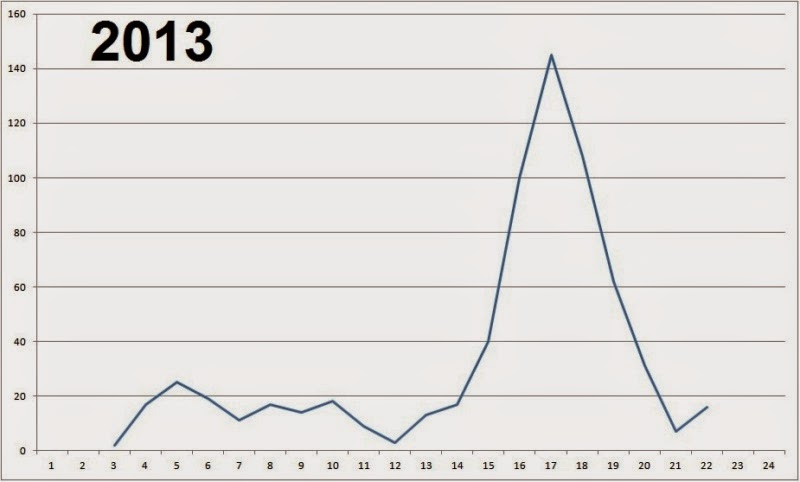 In contrast 2013 was one of the best years I can remember. It is interesting to see that the spring populations were low as a result of the bad weather their parents had experienced in 2012. I still managed to count 523 butterflies on my transect, though. 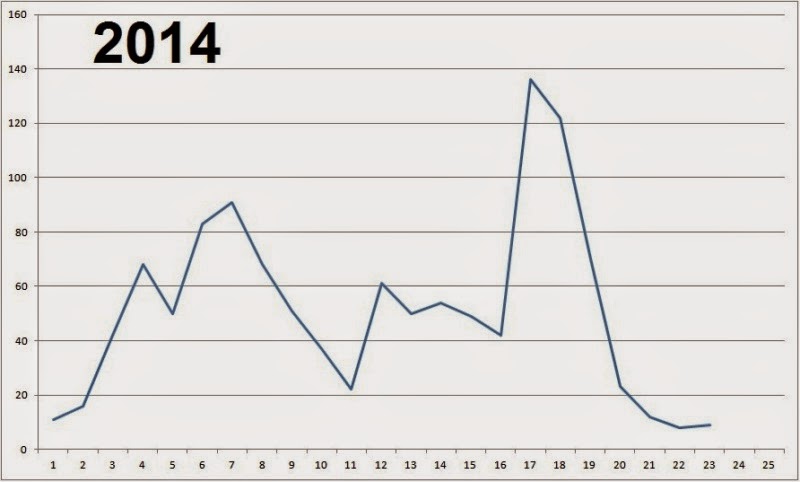 This year the weather was great again, although it did cool down quite a bit in August and September. The graph above shows what I would consider to be close to a normal number of butterflies. I counted a total of 1175 butterflies on my transect this year. So this really confirms that 2014 has been a fantastic year for butterflies here.

Over the last few years we have been discovering more and more species of butterflies moving northwards into East Lothian. I had a look at records for 1970 which shows only 12 species of butterflies occurring here along with a couple of regular migrants. Last year I received records of 23 different species in East Lothian.
Earlier this year, I wondered if it would be possible for this trend to continue. And sure enough it has. In an earlier post I mentioned that Green Hairstreaks had been found in the hills just inside East Lothian, but they were in an area that I hadn't realised I should have been recording in, so they may have been there for years. That was species number 24!
On 16th June I received a message from a friend from the Scottish Borders. He had been in East Lothian looking for orchids and on his way back to the Borders he had found some Large Skippers, Ochlodes sylvanus, on a bit of waste land just over a bridge from East Lothian. They were literally thirty feet outside East Lothian! 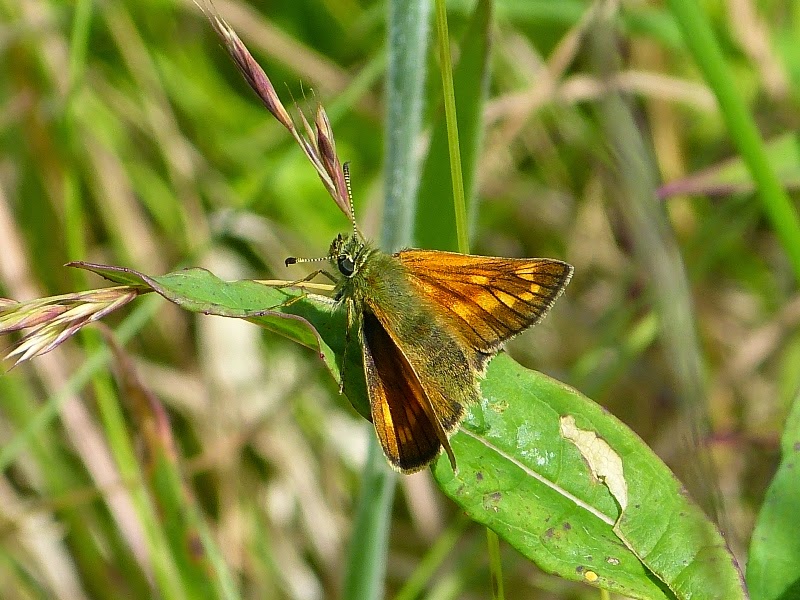 Checking the distribution maps for Large Skippers from 1999, I saw that they occur in all of England and Wales and stop almost at the border with Scotland. So, it seems that they have extended their range northwards by at least 40 kilometres in the last 15 years.
The following day I went to have a look for the Large Skippers with a friend and we managed to find the colony on the other side of the bridge. However, despite searching similar habitat on our side of the bridge we didn't find any in East Lothian! 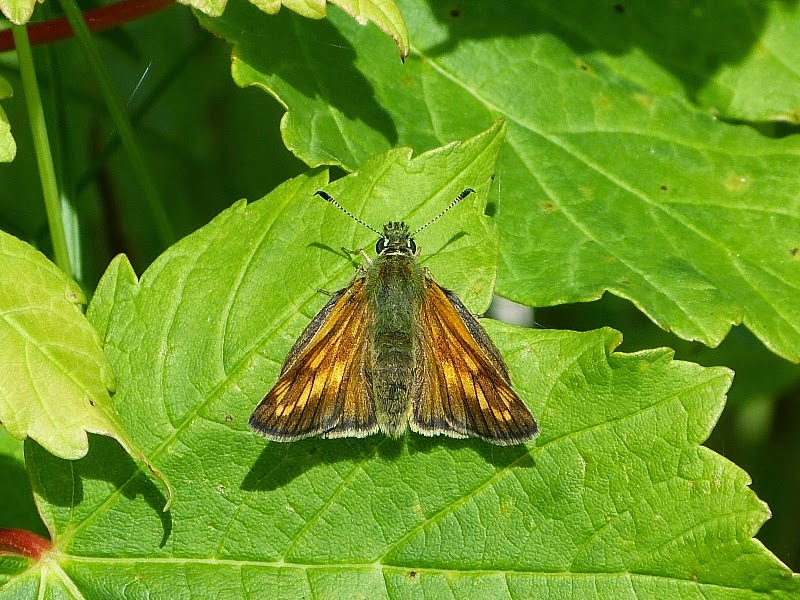 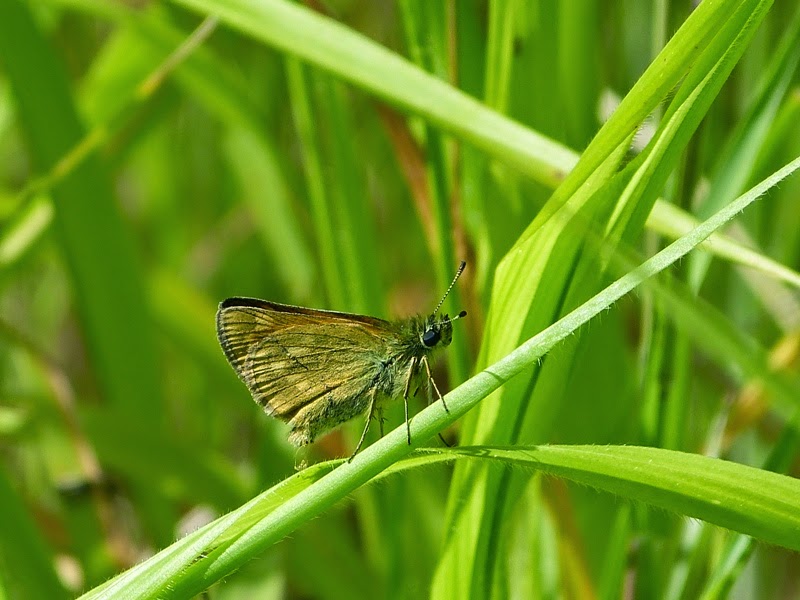 Only two days later another Large Skipper was seen a few miles away, in a spot that I had checked out the week before! 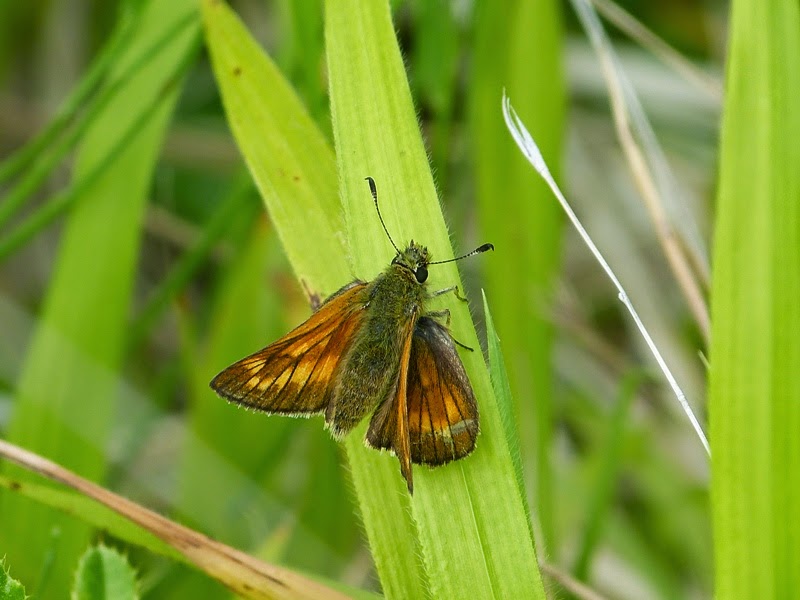 I was pleased to know that we had yet another new species here, but I was a little frustrated that I hadn't seen one myself inside East Lothian. However, only a few days later I was visiting a community project not far from where the Large Skippers had been seen, and I thought it was worth checking out an area of grass next to the road. 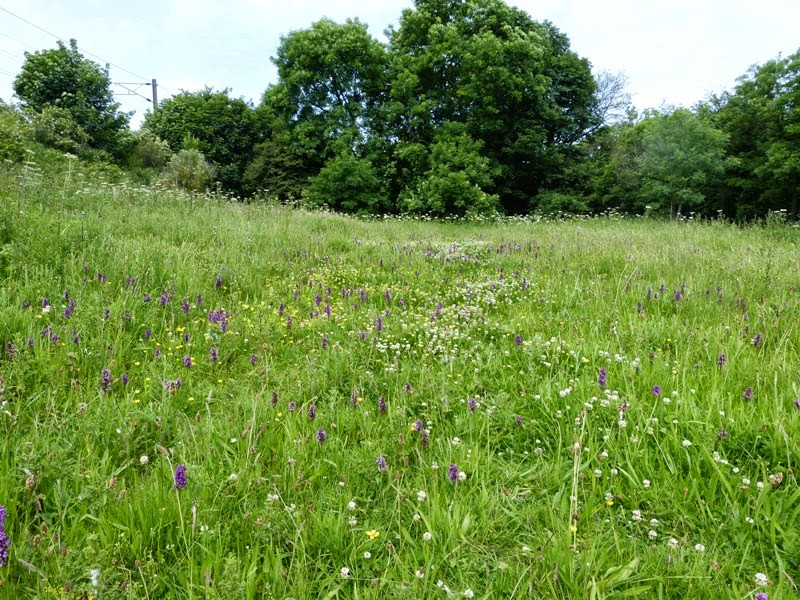 I was delighted to almost stand on a Large Skipper! It was quite scruffy compared with those we had seen just over the border, but I didn't mind! It was my first East Lothian Large Skipper! 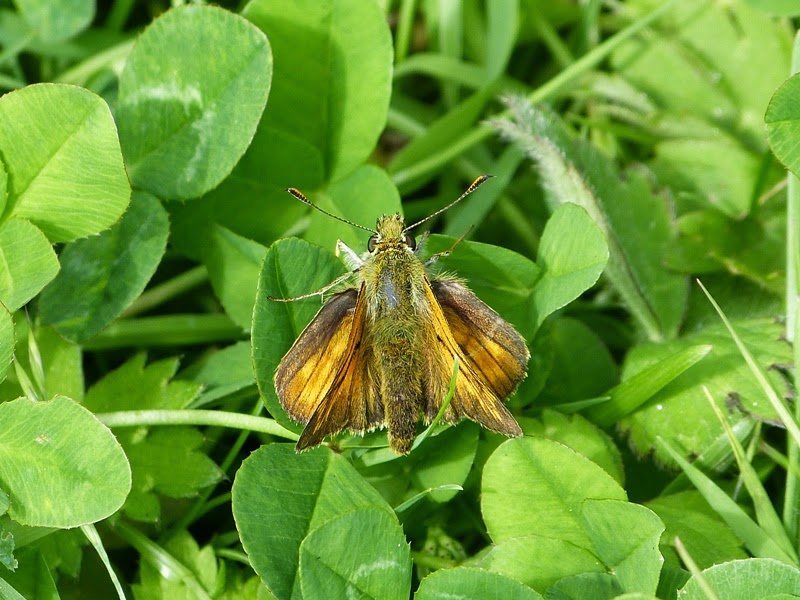 It seems that the Large Skipper has followed the same route into East Lothian that the Speckled Wood and Wall Brown did only a few years earlier. I think that the hills to the south of East Lothian form a barrier for butterflies, but they are able to skirt the hills along the east coast.
It will be interesting to see if the Large Skippers move across the county as quickly as those two species have.
Posted by Nick Morgan at 19:27 10 comments: