Following on from my previous post here are the remaining species recorded in East Lothian in 2017. 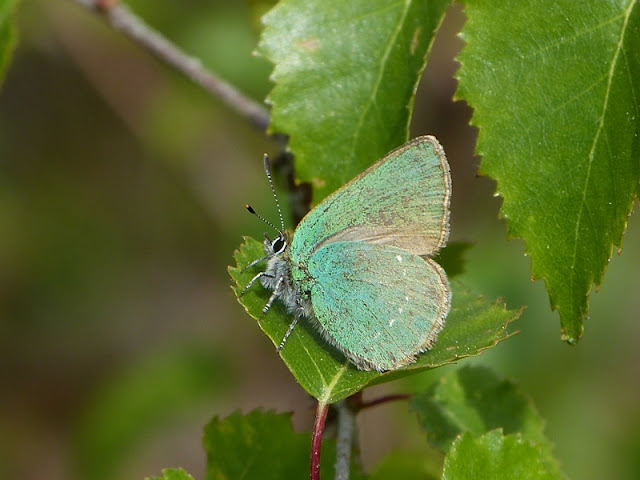 The Green Hairstreak is probably very much under-recorded in East Lothian. There are old records from the Lammermuir Hills, but they have not been seen in those sites for many years. They have, however, been discovered in other areas of the Lammermuirs and in woodlands on the East Lothian side. They require blaeberries as food plants for the caterpillars, and everywhere we have found them is within a few feet of conifer trees. Numbers appeared to be down in 2016, but it is difficult to tell how they are doing without more specific monitoring. 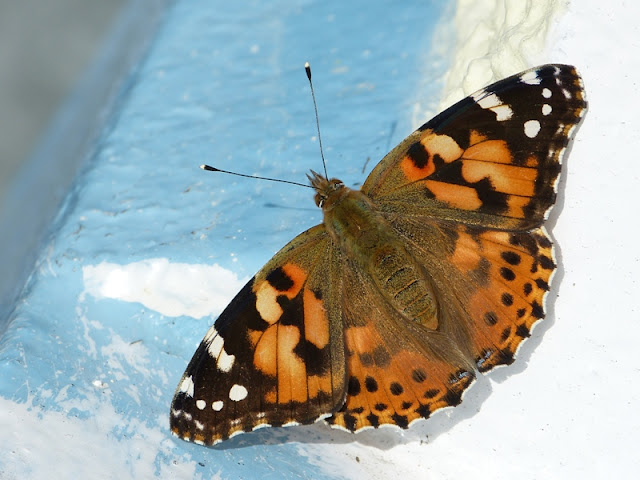 Painted Lady numbers are very variable year on year, depending on many factors on their long migration from Africa to the UK. We don't ever see enormous numbers of them in East Lothian. The first record for East Lothian was on 5th May and it looks as though there was a better than average arrival of Painted Ladies. They didn't go on to produce a large second brood, presumably as a result of the summer weather. 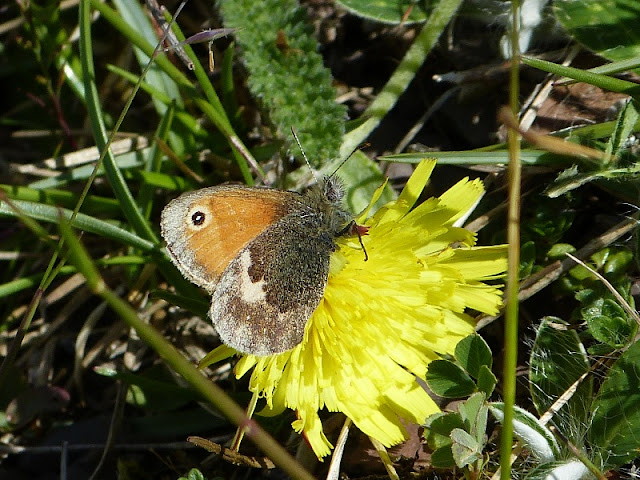 The Small Heath confuses me a little! In the south of the UK there are two generations a year and up here we are supposed to get just one generation. However, I have noticed a big difference between sites in East Lothian. They are rarely seen beyond the end of June in John Muir Country Park, yet in other sites are seen through until the end of August. In 2017 the first record was on 6th May. They started off doing well, but their numbers were lower later in the season. We have been getting later records each year, but in 2017 we had a remarkably late record of one being seen on 20th October. I can only imagine this was from a second brood. 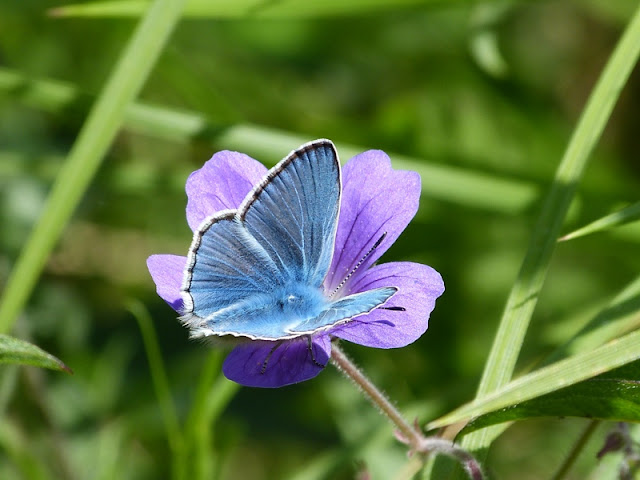 The Common Blue was seen in slightly lower numbers than normal in 2017, with sightings being lower than average towards the end of the season. The first Common Blue was recorded on 31st May and they had a fairly normal year with numbers just a bit down on the average. 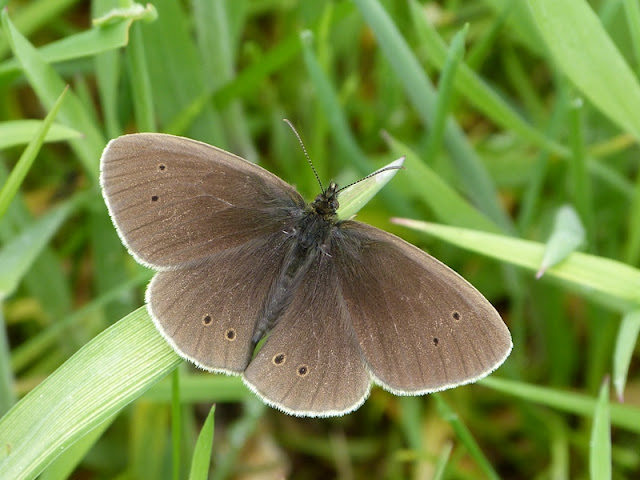 Ringlets did reasonably well in 2017. The first record received was on 14th June and their numbers built up quickly to a maximum, three weeks later and then back down to zero in the next five weeks. 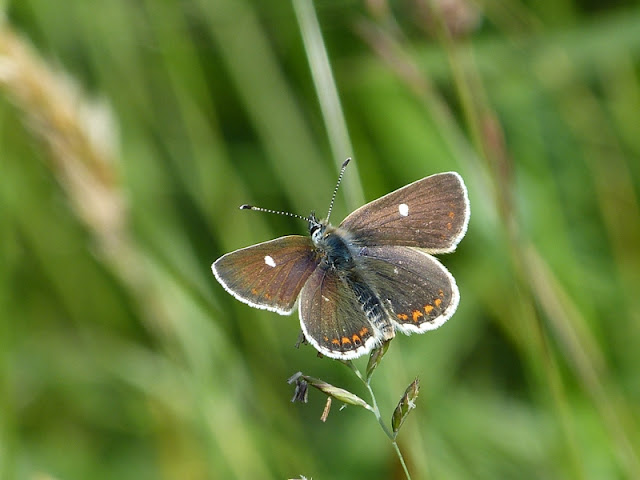 The Northern Brown Argus only occurs in a few small colonies in East Lothian. There is one very well established colony in the Lammermuirs, a very small and precarious colony on a golf course near Dunbar and possibly another couple of inaccessible sites where they occur. They tend not to travel far from their food plant, Rockrose, and therefore don't have much likelihood of spreading in East Lothian. The first record in 2017 was on 17th June and because we receive so few records it is difficult to assess how well they are doing. 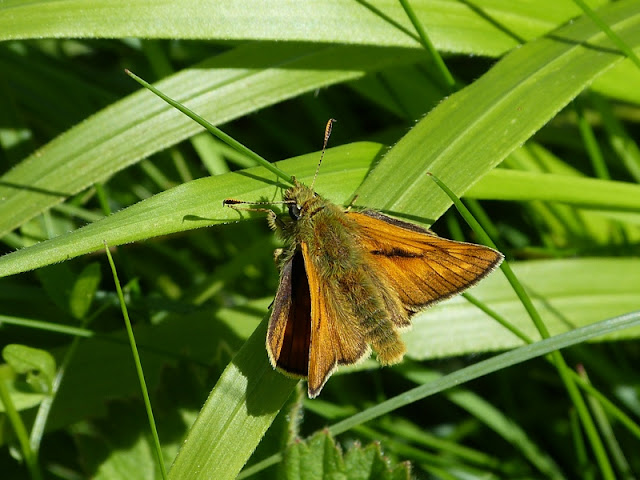 It was very pleasing to receive two records of Large Skippers in 2017. In 2014 we received our first record on the coast just inside East Lothian. We had expected them to continue along the coast, as many other species have, but despite many people searching there were no sightings in 2015 or 2016. Then on 17th June 2017 someone spotted them in two locations in the foothills of the Lammermuir Hills. They had caught us all off guard and sneaked west! I am sure there will be plenty of us out checking appropriate sites along the Lammermuirs in 2018!

Meadow Brown, Maniola jurtina
The Meadow Brown is normally the most numerous butterfly in East Lothian, but this year it was knocked back into four place. The first record we received was on 19th of June and this coincided with the start of the horrible rainy weather. It is interesting to see that numbers picked up to almost normal levels in August once the rain had stopped!

Small Skipper, Thymelicus sylvestris
The Small Skipper was first recorded in East Lothian in 2011 and since then it has been increasing in number and spreading across the county. This butterfly was first spotted at Aberlady bay, then in Saltoun Wood, other sites along the coast, Gifford, Linn Dean and Haddington to mention just a few. It would be interesting to know it manages to get to all these sites. Does it fly large distances, or is it that we just haven't noticed it in places between these sites? 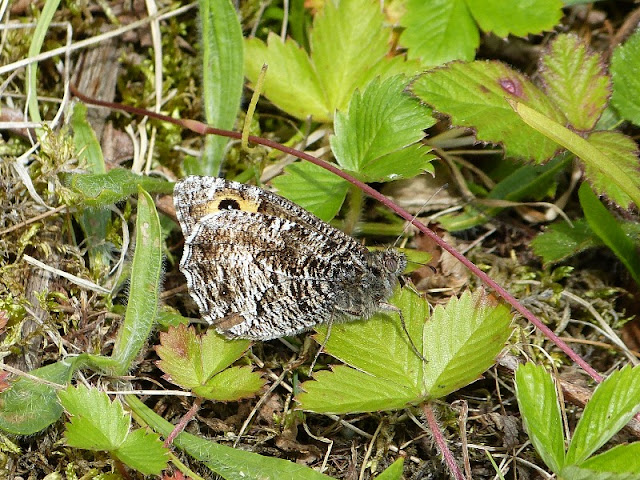 The Grayling is only regularly seen in two or three sites in East Lothian. Unfortunately, one of those sites, Blindwells, is due to be developed and public access is being restricted. They are normally seen between mid-June to the end of August. The first record I received in 2017 was on 24th June and numbers seemed low this year. 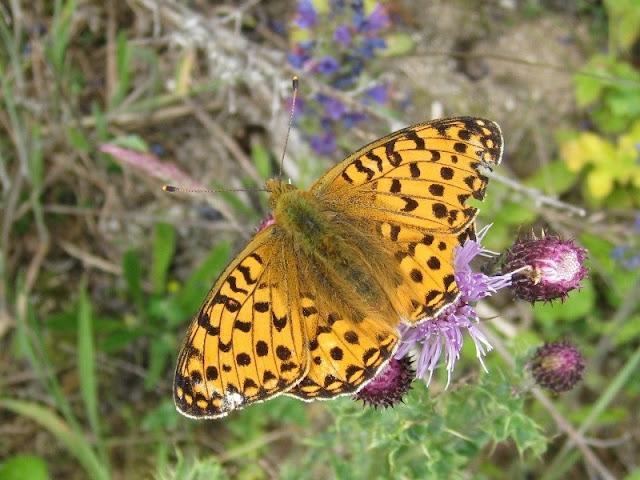 The first record in 2017 of a Dark Green Fritillary was on 1st July. Sadly, because their emergence was during the rainy weather 2017 was their worst year of the last five years. Numbers of ad hoc and transect records were both less than half what would normally be expected.

Sadly, 2017 was the first year that I haven't received a record for a Holly Blue since 2009. There was a colony around the Newhailes and Brunstane area, which sadly seems to have died out and each year I have received one or two records from around the Gullane/North Berwick area. I live in hope that there is a little colony hidden away somewhere in that area.

I am very grateful to all of those who have contributed butterfly records. It shouldn't be too long before we are seeing butterflies again in 2018!

2017 was a strange year for butterflies. It started off reasonably well, but the summer butterflies were rather disappointing. Luckily there was a late autumn resurgence of Speckled Woods and Red Admirals, which boosted the overall number of butterflies seen.
We had a good spring in 2017 after a mild winter with only one dusting of snow. From the end of March until mid-June we had decent weather, but then we had a period of very heavy rain. This seemed to impact on many species of butterflies (and I am told some species of birds). Certainly I saw a batch of Small Tortoiseshell caterpillars wiped out by the rain in June and also an enormous group of Peacock caterpillars perished after three days of continuous rain in July.
This year, we had more people than ever sending in records. This has given a bit of a false impression of the number of butterflies that there were around. One thing I noticed this year was that there were very few records of large numbers of butterflies being seen.
I have looked back over the last five years' worth of records and noticed a worrying trend in that the number of butterflies per sighting has been steadily reducing each year.
Below is a summary of how each species did in 2017. 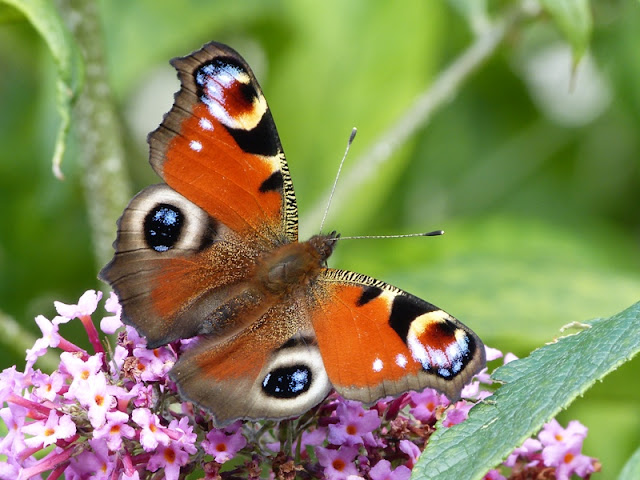 A really early sighting this year, the first Peacock record I received was on 16th January on an unusually warm and sunny day. They were recorded every month through to November, with numbers peaking towards the end of August. Peacocks did reasonably well this year, unlike the Small Tortoiseshell, which has a very similar life cycle. 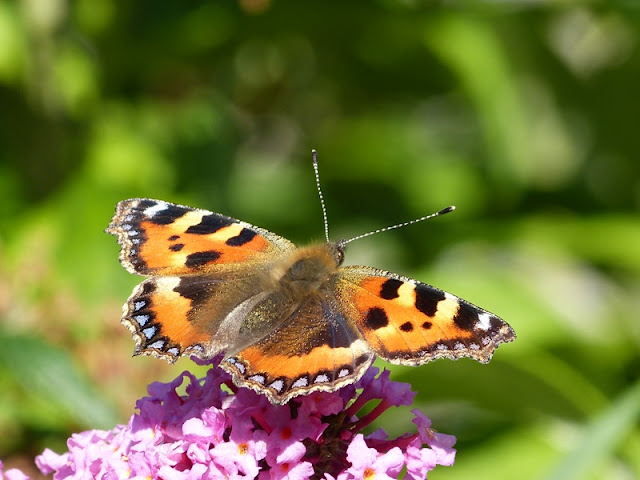 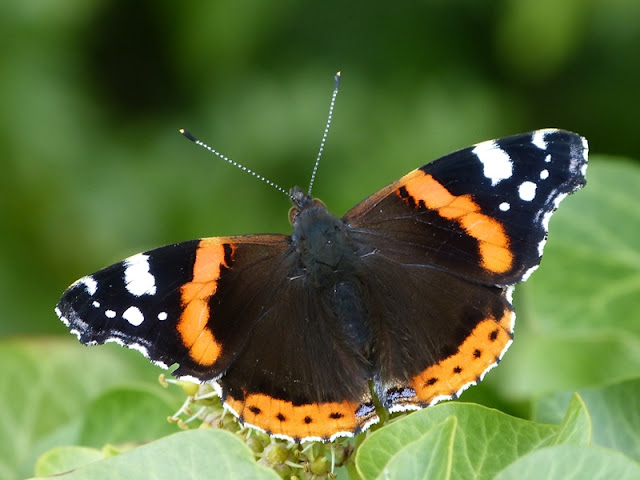 The first Red Admiral recorded was on 9th March. I would speculate that this was an individual that had spent the winter here. They were seen every month after that right through to December, with numbers peaking in September. This was our most commonly recorded butterfly this year, and it did very well all over the UK. This is a butterfly that only a few years ago was considered as a migrant, but which has now firmly established itself here. 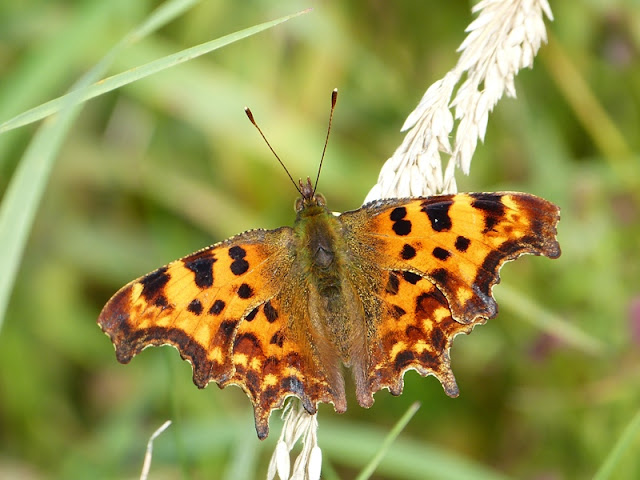 The first record of a Comma this year was on 12th March. The Comma has never been a particularly common butterfly in East Lothian. Since first being recorded here in 2001 their numbers have picked up each year, peaking in 2015. For some reason 2016 was a terrible year for them and in 2017 there have been a few more seen, but still worryingly low numbers. 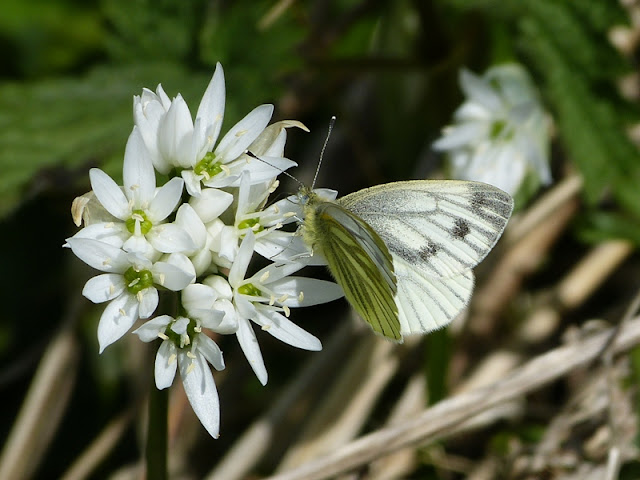 The first Green-veined White was recorded this year on 1st April. They seemed to have a fairly average year, but I think in reality numbers were lower than usual (given that we had more people recording butterflies). Certainly, the number recorded on the transects was lower than average. 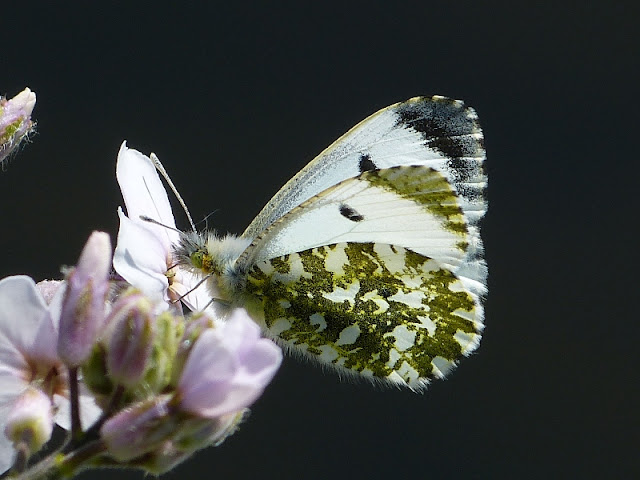 The Orange Tip was first recorded on 6th April. The number recorded was a little higher than average, as expected. The adult stage of this butterfly usually flies between April and mid June, so they missed the terrible weather just after that. 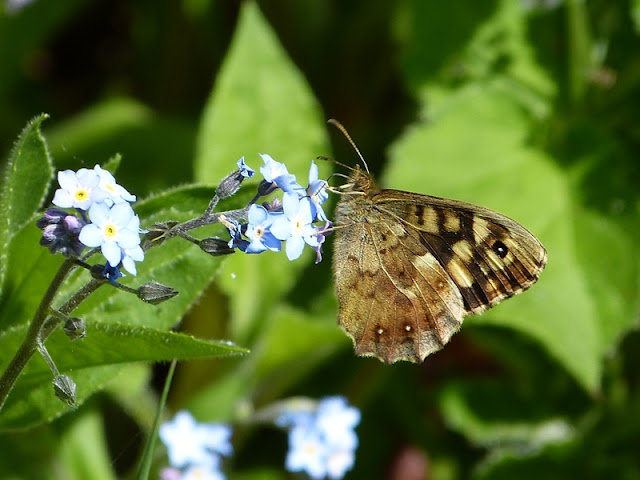 The first Speckled Wood was seen on 8th April. There are generally three peaks in population of adult Speckled Woods throughout the year. Possibly the first to appear had spent the winter as a chrysalis. The second peak, in June, could be those that spent the winter as caterpillars. This year the number of records received in June was much greater than in previous years, but the later generation was not so spectacular, although there were a great number of records received in late September, making this the second most numerous butterfly recorded in East Lothian in 2017. 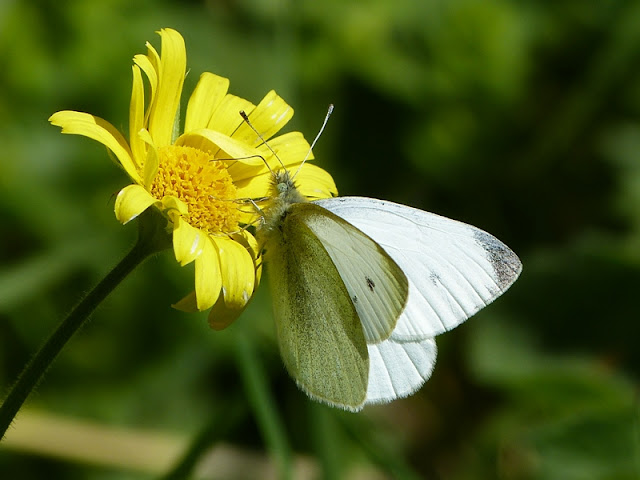 The Small White was also first recorded on 8th April. I think that the Small White is generally a little unrecorded, as it is difficult to identify unless it lands. 2017 started off reasonably well for the Small White with normal numbers being seen in the spring. However, the summer generation was very reduced, presumably as a result of the heavy rain during June and July. 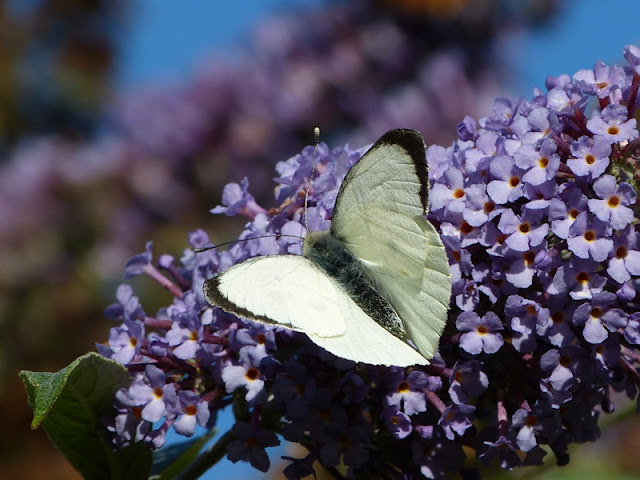 The Large White would normally follow a similar pattern to the Small White. The first record for 2017 was on 8th April and thereafter the Large White had a fairly average year. More were recorded this year than the previous three years, but remember there were more people recording them. Why the Small White struggled and the Large White didn't appear to be affected by the weather is a mystery to me! 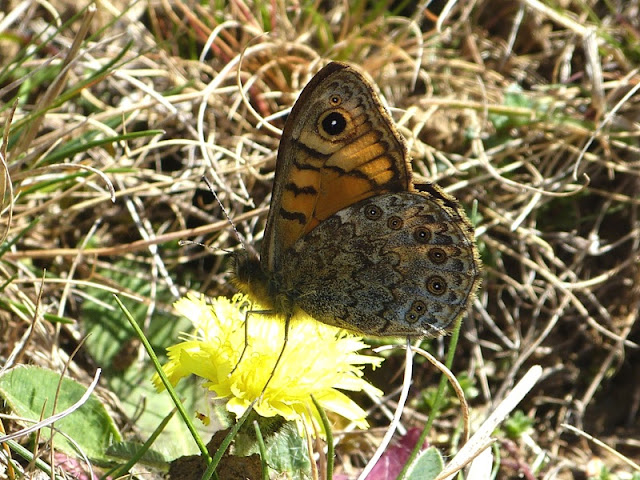 The Wall Brown was one of 2017's success stories. First recorded here in 2010 the Wall Brown has since been spreading westwards around the coast and to several inland sites. In 2017 the first record was on 20th April and the first generation continued to be seen until  3rd June. The second generation started on 5th August and it was recorded through to the 19th September in much greater numbers than in previous years. 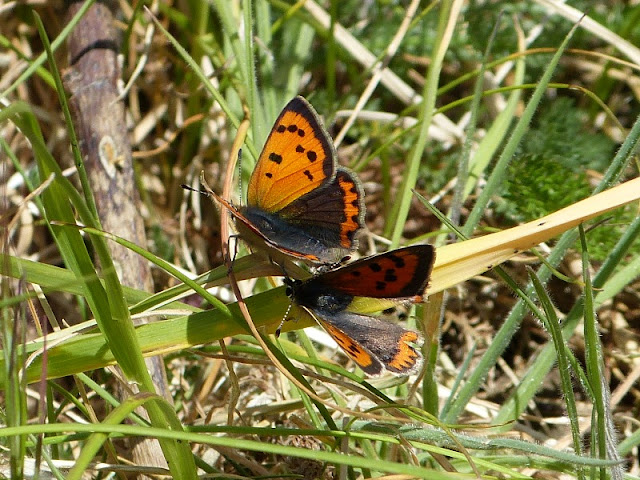 The Small Copper has been fairly consistent in East Lothian over the last five years. 2017 wasn't very different from the average.
I will continue with the remaining 12 species in my next post.
Posted by Nick Morgan at 21:36 7 comments: