Since 2012 we have spent four summer holidays in a villa near Alora, 45 kilometres north west of Malaga. Each time we have been there it has been early July and very hot! The roads were lined with dried up wild flowers and grasses and everything was brown, other than the orange groves and a few private gardens. We would often say that it would be interesting to see the area in the spring, when everything would be green.

So, this year my wife and I found ourselves able to go away by ourselves now that the children have moved out and we decided to return to Alora in April. This time we stayed in an apartment in the village, so it wasn't quite so easy to pop out and look for butterflies.

Unfortunately, we didn't choose the best week to go away. Firstly, the village was the middle of incredible Easter celebrations, meaning most businesses were closed and it was almost impossible to move at times. Also, while the UK was basking in unseasonably hot weather, southern Spain was suffering from unseasonable cloud and showers!

When we arrived the village was in complete gridlock, so it was a good excuse for me to take a quick trip to my old butterfly spot near the villa we used to rent. This was an area where I saw numerous Southern Gatekeepers and Dusky Heaths in the summer months, but I was too early for them this year. Interestingly, Spanish Gatekeepers, Pyronia bathseba, took the place of the Southern Gatekeepers and I wondered why I had not seen them on my four previous visits to this spot. 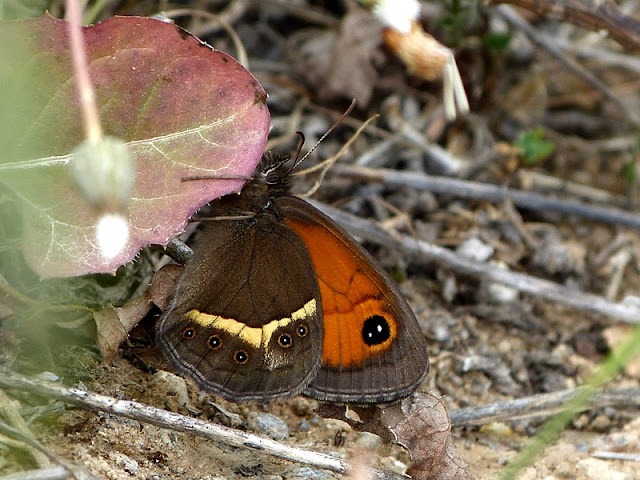 Although it was relatively cool and there were only occasional sunny spells there were still a reasonable number of butterflies flying, including Small Whites, Pieris rapae, Southern Blues, Polyommatus celina, Meadow Browns, Maniola jurtina 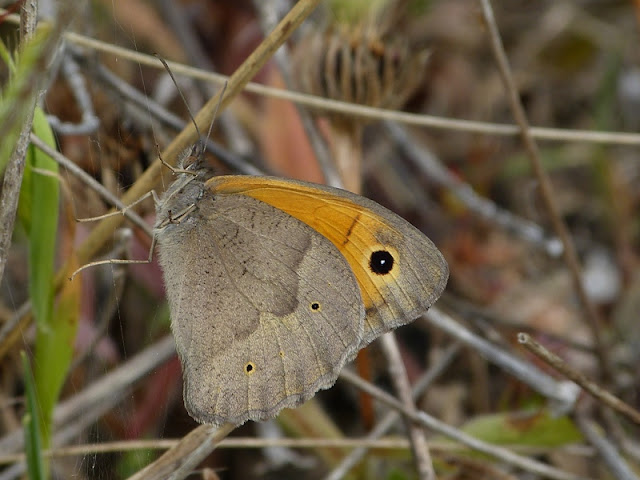 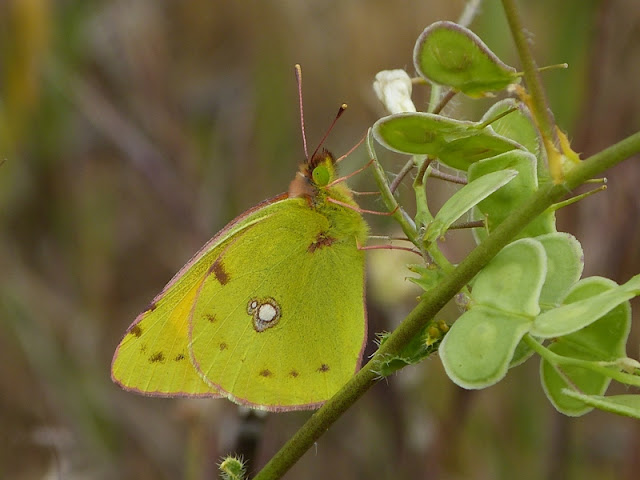 As in previous visits I saw a few Geranium Bronzes, Cacyreus marshalli, which seemed a little out of place in this natural environment. 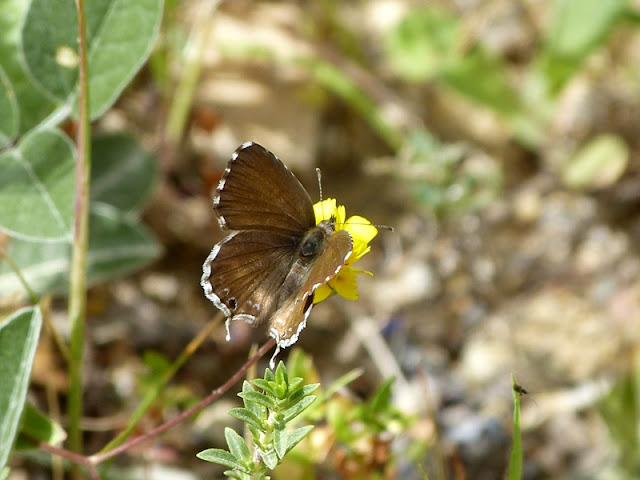 There was also a faded Long-tailed Blue, a Small Copper, a Southern Brown Argus and a Large White. Not bad for an hour on a cloudy day.

In the summer this area is full of flowering Thyme, Lavender and Rosemary, but in April there were a lot of annual flowering plants but the more woody herbs were not yet in flower.

The following day I decided to check out my other favourite spot down by the Rio de Guadalhorce. In the summer there is a great patch of mint in flower, which attracts a lot of butterflies. Of course it wasn't yet in flower, but there were plenty of other wild flowers there. 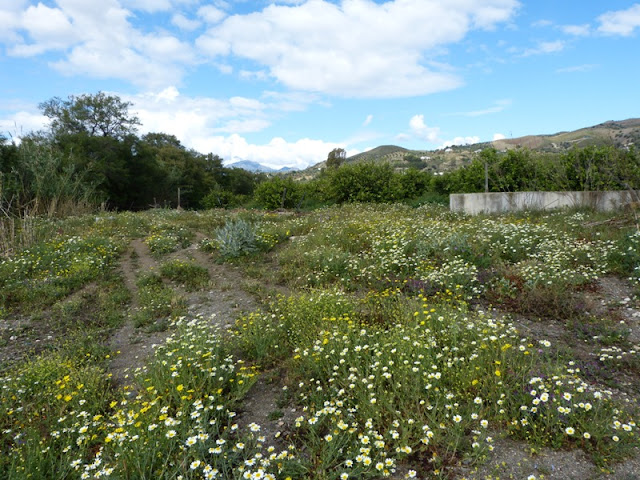 I was frustrated that it clouded over before I arrived and there was quite a strong wind blowing. After about 15 minutes there was a bit of a break in the clouds and a Painted Lady was the first butterfly to brave the conditions. It didn't hang about, but at least it proved that it was warm enough for butterflies.

Not long afterwards I spotted a lovely Long-tailed Blue, Lampides boeticus, in some grass and it slowly opened its wings to absorb a few of the sun’s rays. 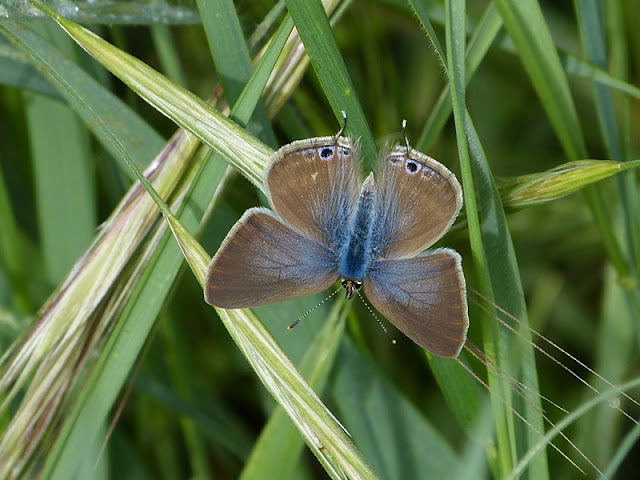 As I watched it a Small Copper, Lycaena phlaeas, landed on a stem close by. 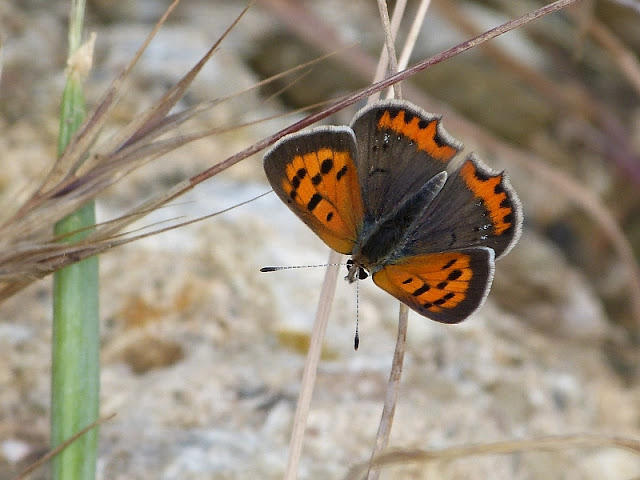 I walked further down stream and found a Southern Brown Argus, Aricia cramera. 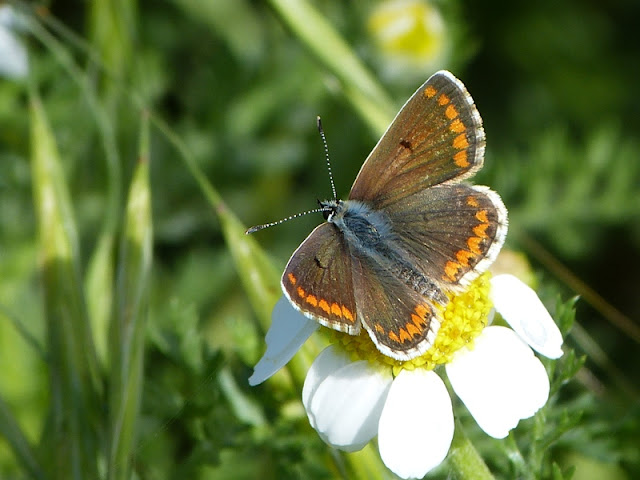 While I was watching it, I disturbed a Bath White, Pontia daplidice, which landed on the ground and once warmed up a bit flew to a flower for a feed. 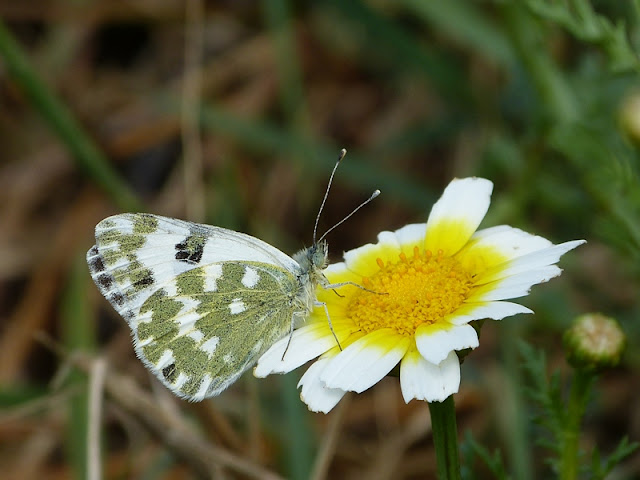 Although it was frustrating that there was so much cloud, at least the cooler weather meant that the butterflies were easier to photograph.

I had specifically gone to this area, as I have always found African Grass Blues here in the summer, but despite extensive searching I didn’t see any on this visit. However, the sun came out and after a while the place was alive with butterflies. Mostly Small Coppers, which looked beautiful glinting in the sun. 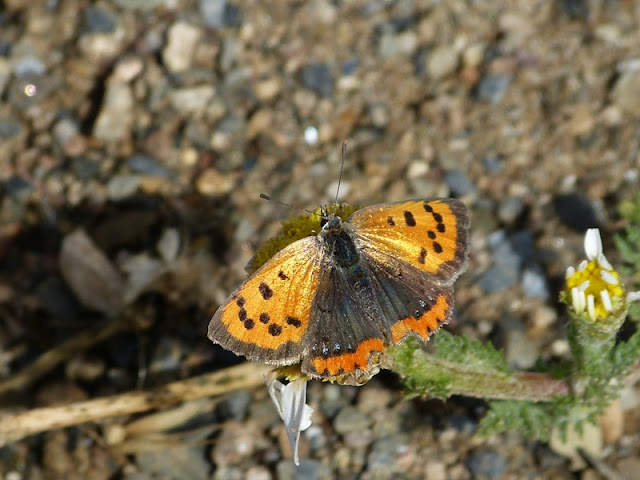 There were also a number of Southern Brown Argus flying with them and by far the most numerous, Clouded Yellows were everywhere I looked. There were the occasional Wall Brown and Meadow Brown, some more Bath Whites, a few small whites and one Southern Blue, Polyommatus celina. 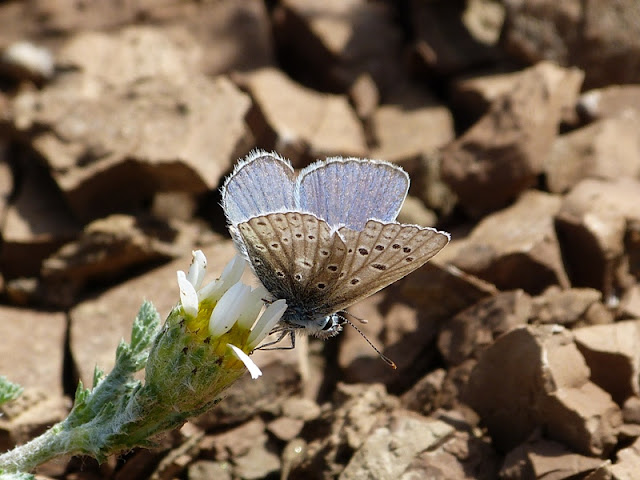 And then, as if they had had too much sun they all appeared to disappear!

The following day I decided to walk up a track above the cemetery. This ran between olive groves and what appeared to be fallow fields. 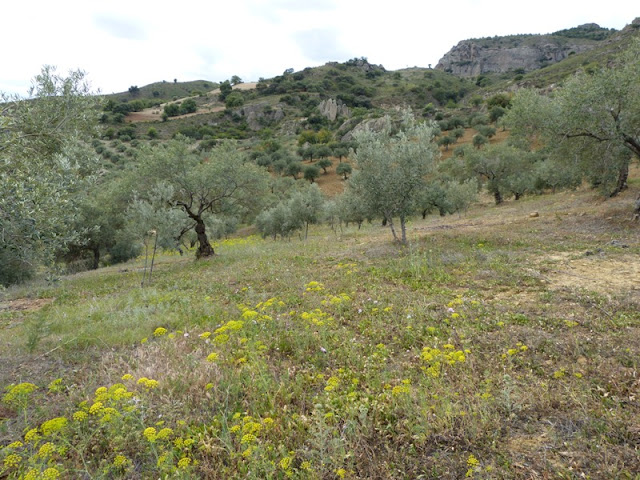 There were plenty of wild flowers and a number of butterflies flitting from flower to flower. They were all white or yellow, being Small Whites, Large Whites, Clouded Yellows 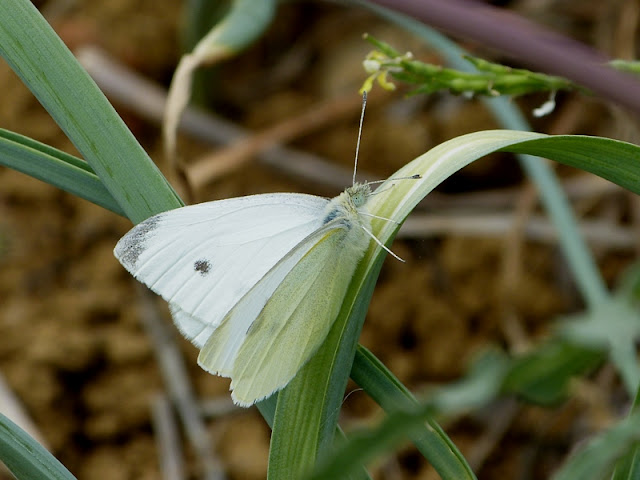 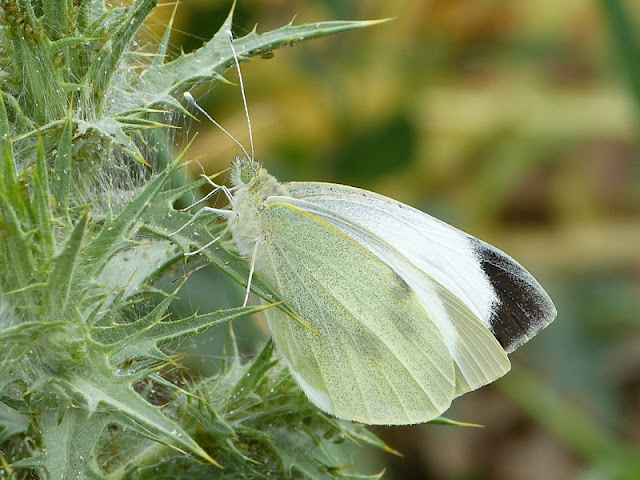 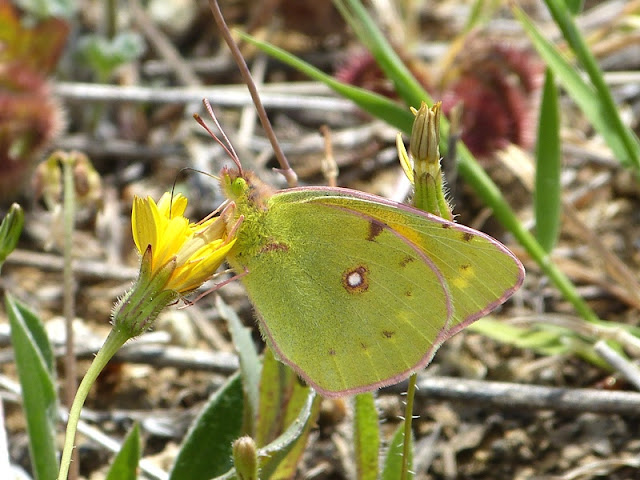 ... and what I assumed were more Bath Whites. However, when I examined my photographs back at the apartment I saw that they were all Western Dappled Whites, Euchloe crameri. 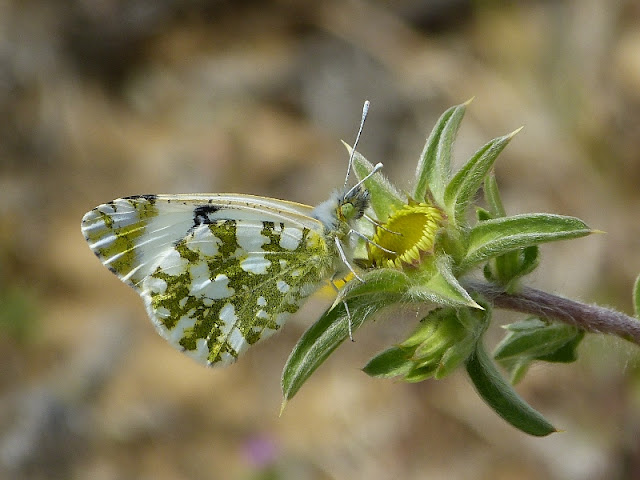 I found it interesting that there were no Bath Whites amongst them. Presumably, just a little change in habitat meant that this area was more favourable to Dappled Whites and the flowers down by the river suited Bath Whites.

I had been keeping an eye on the forecast, which had been pretty accurate. Monday looked like it was going to be sunny in the morning and so I planned to go to a area of limestone mountains about 30 miles north. I will report on what I saw there next. Sadly, however, that was to be the only other day with sufficient sun for me to look for butterflies. Typically, the weather improved considerably from the day we left!

The day before we left I drove past the area near the river where I had seen so many butterflies to discover that it had been completely grazed to the ground by a large herd of goats. Although this was rather frustrating, I was pleased that I had been able to visit the area before this had happened. I did wonder where all of the butterflies would go, though!
Posted by Nick Morgan at 21:15 2 comments: