Last summer my father treated my wife, two kids and me to a two-week holiday in Mauritius. He had offered to take us away on holiday anywhere we wanted and my wife and I were married there 13 years earlier. We had always intended to return, but the cost was prohibitive with the kids as well!! It was fantastic being back at the same hotel and the kids enjoyed the luxury of being at an all inclusive resort for the first time.
Although much of the island has been taken over by sugar cane plantations, the Hotel Maratim is set in 25 hectares of grounds where I was able to sneak off and look for butterflies! 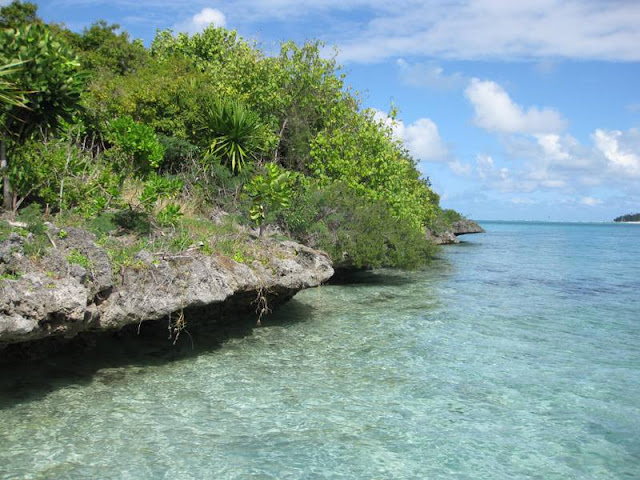 Probably the most common butterfly I saw was the African Grass Blue, Zizeeria knysna. As the name suggests this little butterfly flew around the grass in the hotel grounds and fed on flowering shrubs such as Lantana. 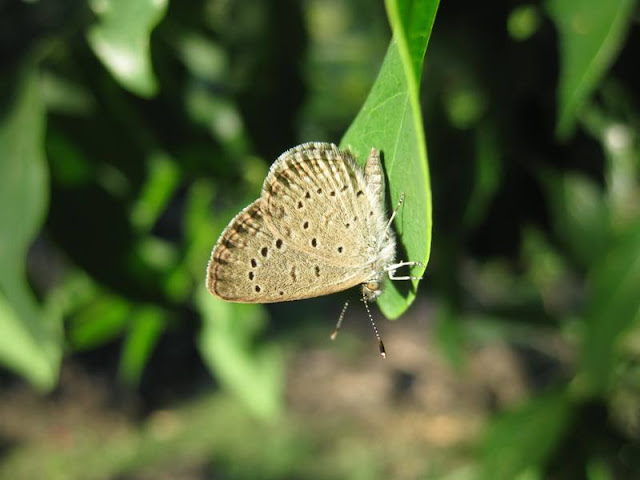 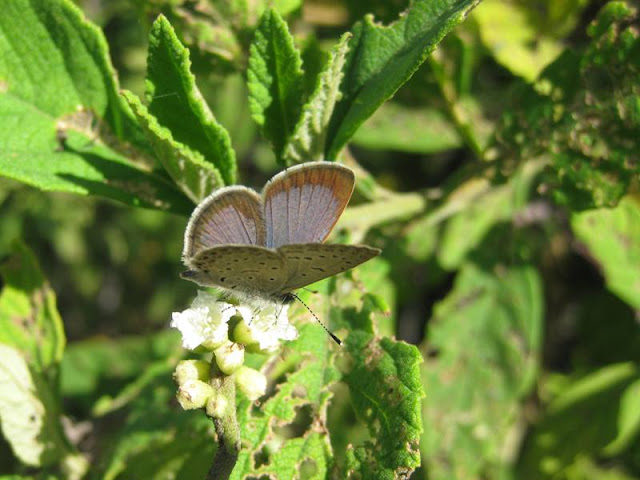 It was rare to see them with their wings open, but as with many blues the upper side of the female was mostly brown while the male was blue with darker edging. 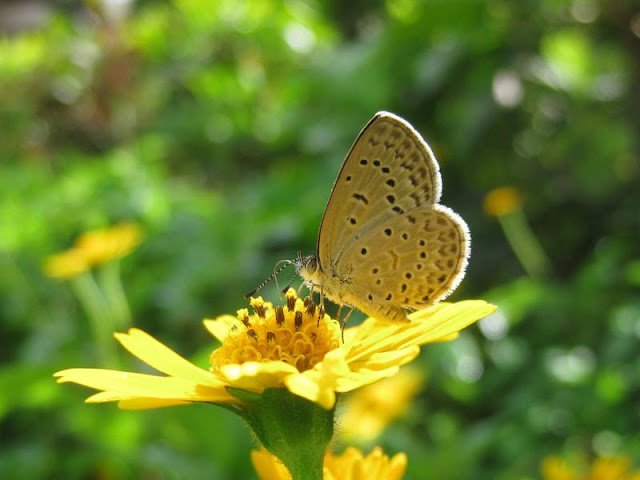 It was funny that the African Grass Blue was the butterfly that I set out to see in Spain in April without any luck. I then found it in Lanzarote and again in Mauritius.

The other blue that was regularly found flying around flowering shrubs was what is called the Common Blue in Mauritius, but I know it as Lang's Short-tailed Blue, Leptotes pirithous. The ones I saw in Mauritius seemed to be more heavily marked than those I have seen in Europe and I presume they are the subspecies insulanus, which is found in Mozambique. 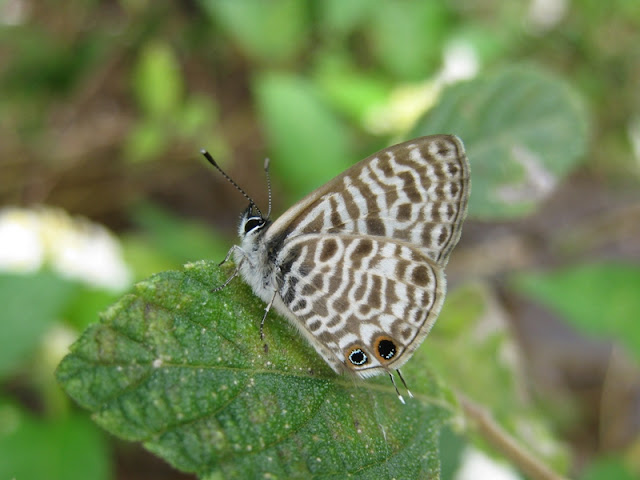 Another regular butterfly was the diminutive Tiny Grass Blue, Zizula hylax. This is the smallest butterfly I have ever seen with a wingspan of only about 15mm. 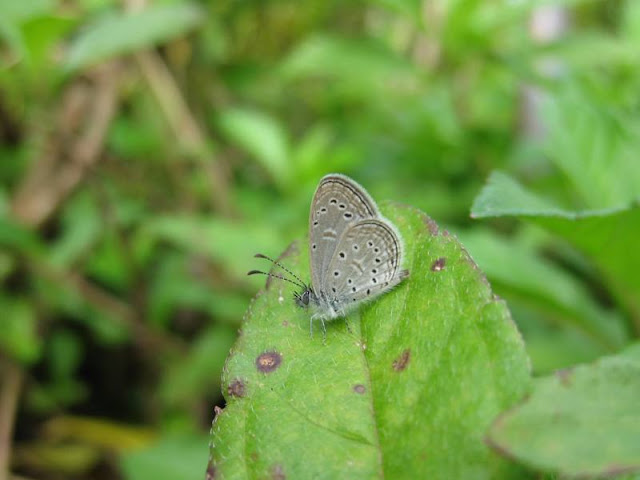 This butterfly was so tiny that my camera had trouble focusing on it. Most of my pictures ended up being deleted and none of them were perfectly in focus. 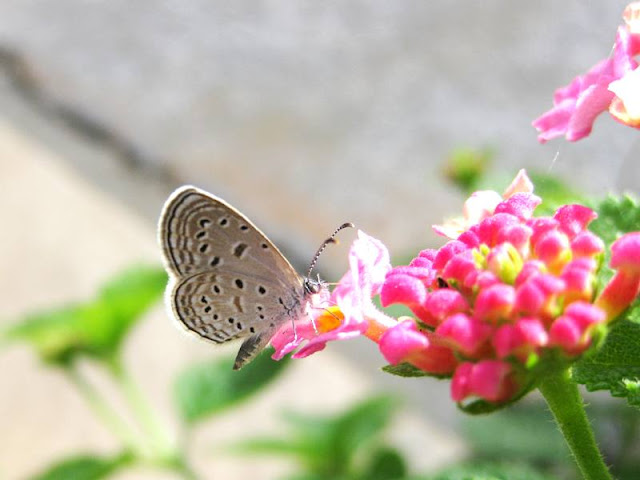 There was another blue that I could rely upon seeing each day - the Brown Playboy, Virachola antalus. This would often drop down from a tree onto the ground just like a falling leaf. It is also cleverly marked with a false eye and tails that look like antennae at the ends of its wings. These markings can often save the life of the butterfly when birds peck at the wrong end resulting in the butterfly losing a bit of its wings, but surviving to fly another day. 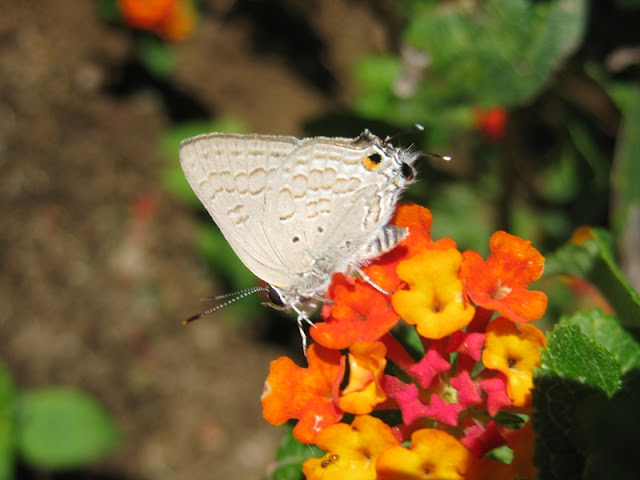 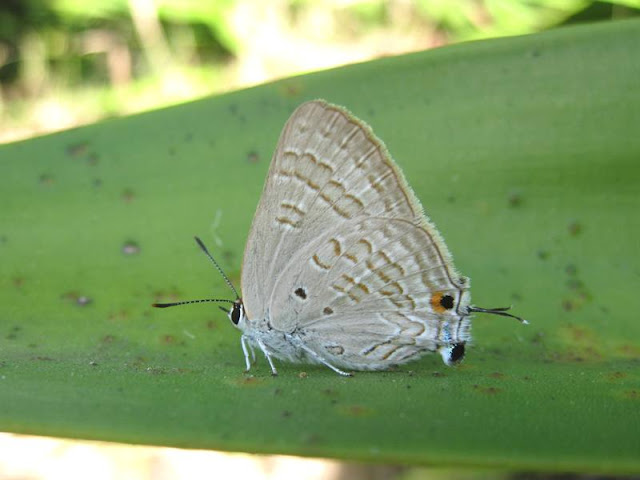 I found a bush in a corner of the grounds of the hotel (since identified as a String Bush, Cordia cylindristachya) that must have regularly hosted over 100 of the above four species of butterflies. I regularly visited it and spent ages checking out each butterfly looking for Clover Blues, Zizina antanossa. This butterfly is almost identical to the African Grass Blue, but it is lacking one spot on the underside of the fore wing. I didn't find any, but while I was looking I found a couple of other butterflies. This is a faded Plains Cupid, Chilades pandava demonstrating what happens when it has been attacked by a bird having lost its eye spots and tails. This butterfly was first recorded in Mauritius in 2000 and is now considered a pest as its caterpillars feed on Sago Palms. 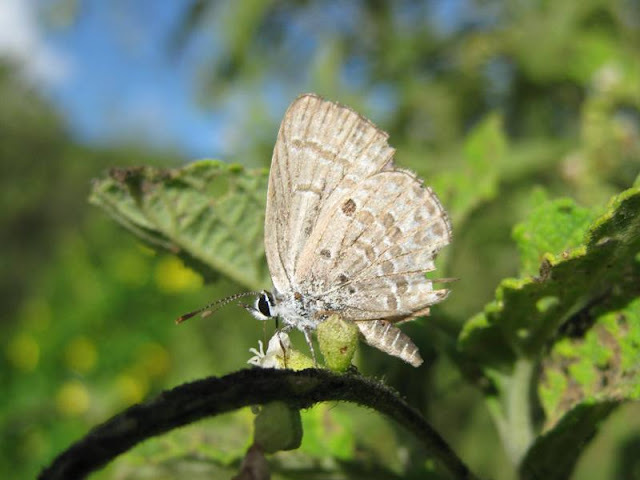 And this is a sub-species of the African Line Blue, Pseudonacaduba sichela reticulum, which only occurs on Mauritius. I only saw it very briefly and it flew over the other side of the bush, so I was very pleased to get this picture. 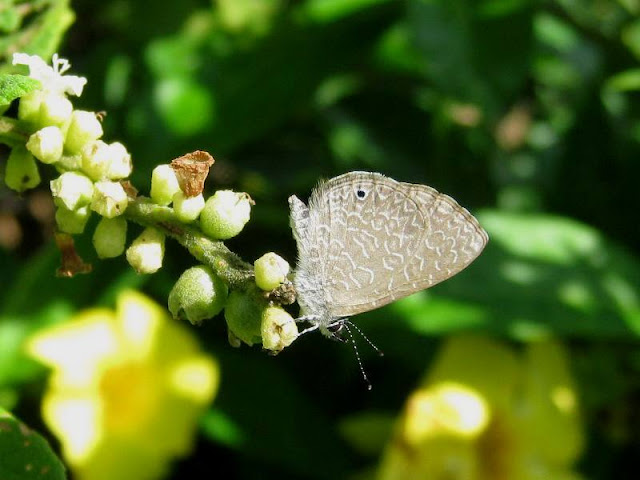 This is a rather poor picture of a not very colourful butterfly! It is the Olive Haired Swift, Borbo borbonica. I disturbed it when I was walking in some grass and it flew up in front of me, briefly landed and then flew off and I wasn't able to find it again. 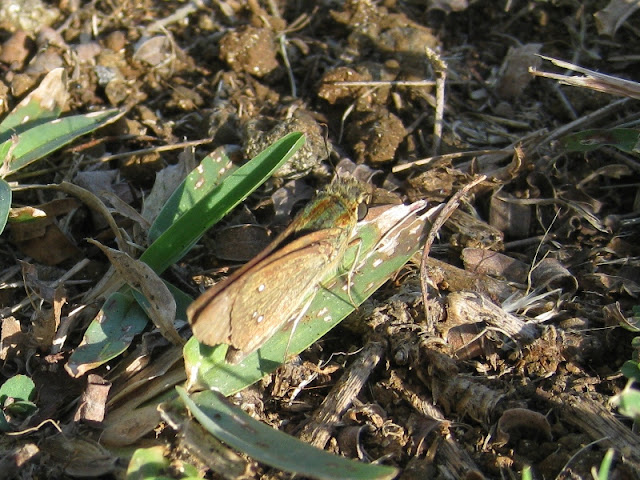 The other Hesperiidae I saw was a little easier to see. It was the Striped Policeman, Coeliades forestan abrogates. I regularly saw this feeding on Lantana plants, but it was never still. It would constantly vibrate its wings while it was feeding. 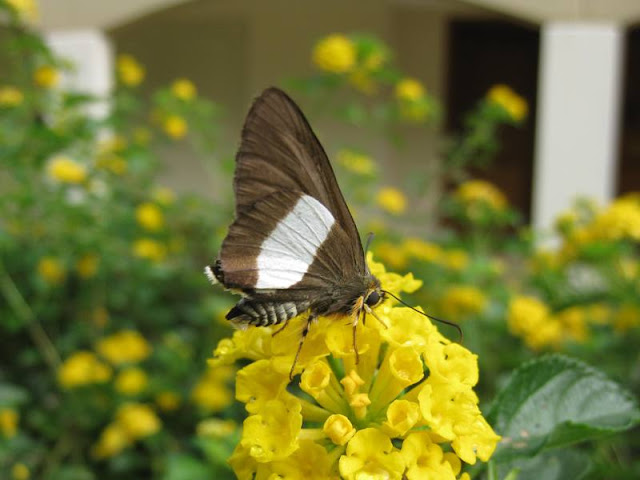 A much more colourful butterfly, and the one I really wanted to see was the Brilliant Blue, Junonia rhadama. I saw it most days, but it was very difficult to approach. This is a female, which can be identified by having two eye spots on each hind wing. 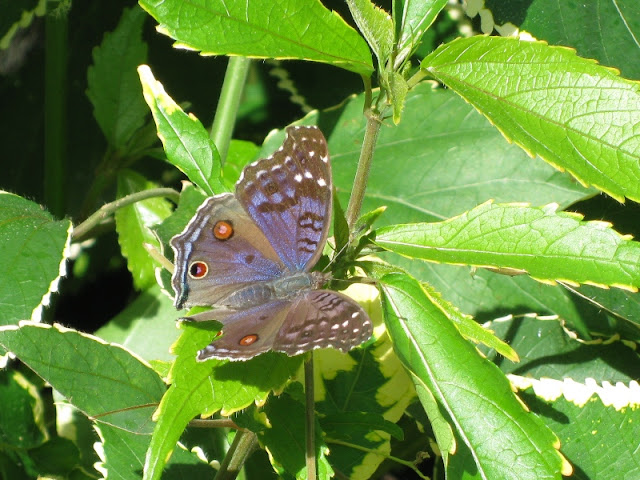 And this is a male, with only one eye spot and brighter blue wings. It took me a long time to manage to sneak up close enough for this picture! 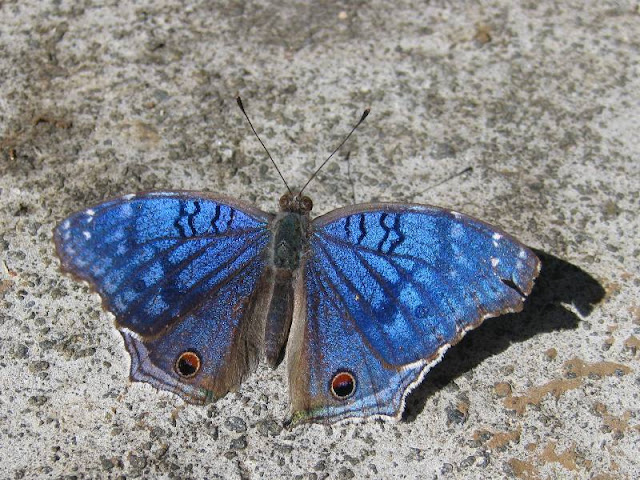 The colour varied depending on how the sun hit the wings. Sometimes it was very bright blue and other times it was more of a purple colour. 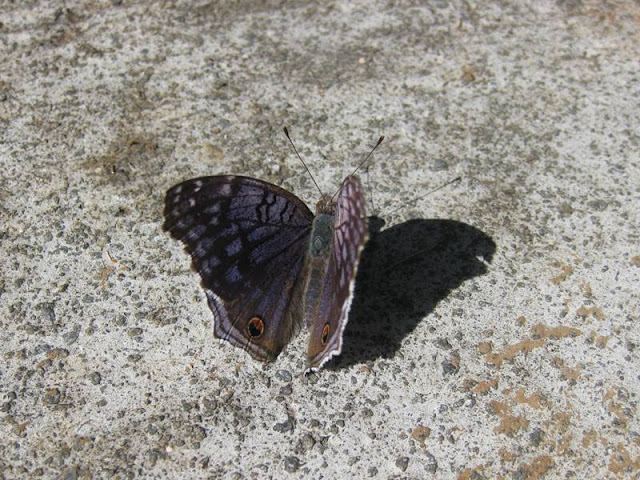 The underside wasn't as bright, but still beautifully marked. 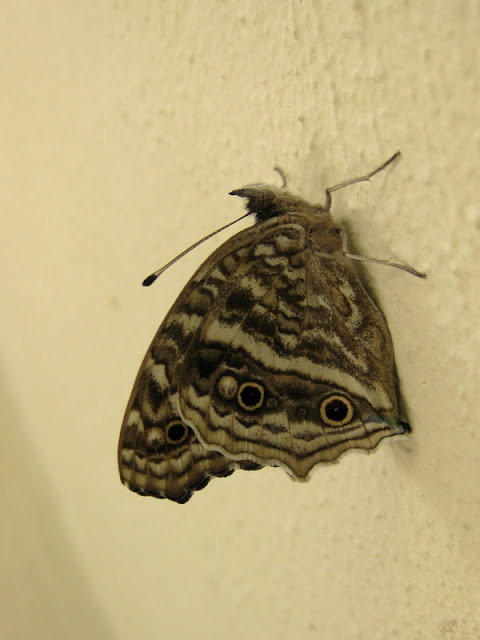 The Common Leopard, Phalanta phalantha was another regular in the hotel grounds. Like the Striped Policeman it never seemed to stop flapping its wings! However, one day, when it clouded over, I came across three of them sitting on the ground with their wings open. 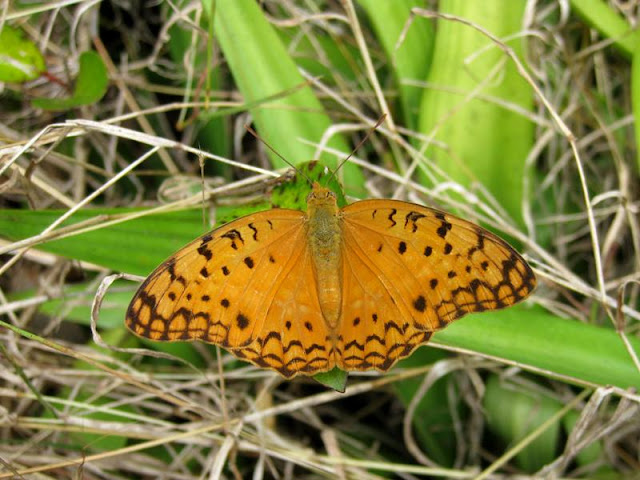 On a number of occasions I saw a small yellow butterfly whiz past me, flying close to the ground. One day I decided to follow one, expecting that is must stop flying at some point. I think I followed it for about half an hour until the sun went behind a cloud and it settled on the ground. This one turned out to be Eurema floricola, the Malagasy Grass Yellow. The forewing of this super little butterfly is only about 20mm long and the upper side of the wings have a narrow black border. 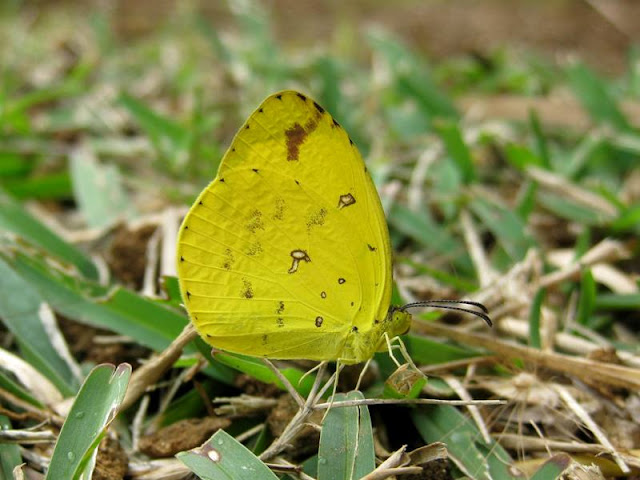 Eurema brigitta, the Broad-Bordered Grass Yellow also occurs in Mauritius, but it isn't as bright yellow as the Malagasy Grass Yellow.

Henotesia narcissus narcissus is a kind of Bush Brown but I don't think it has a common name. They were usually found in wooded areas, dropping to the ground from the trees. 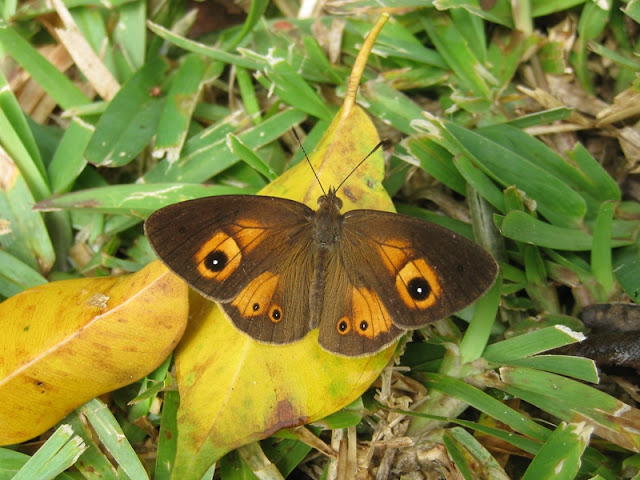 This is the underside of  Henotesia narcissus narcissus. 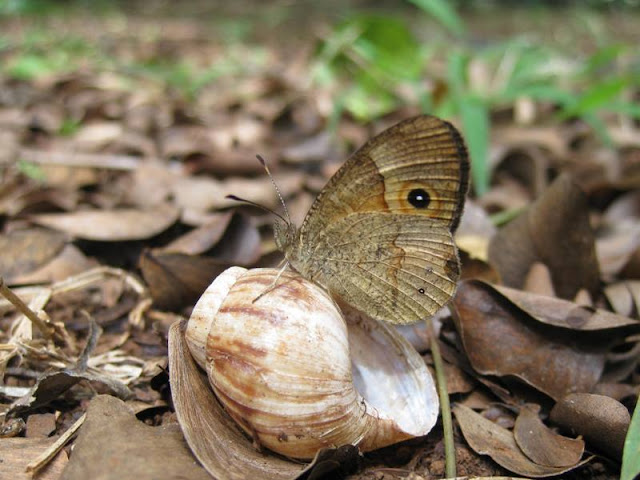 On the second morning of our holiday I checked out a flower bed in the hotel grounds close to our room. Amongst the butterflies there was this black and white one. I took some pictures and then became distracted by the other butterflies there. At the time I didn't have a butterfly book for the island, but a few days later I bought one in Port Louis. I was then able to identify this as Hypolimnas anthedon drucei, a butterfly that has only been recorded a few times in Mauritius, the last time being 1957!! It is much more common in Madagascar, but that is over 600 miles away. It makes me wonder whether this species has quietly been living in Mauritius, unnoticed, or if this one somehow arrived here from Madagascar. 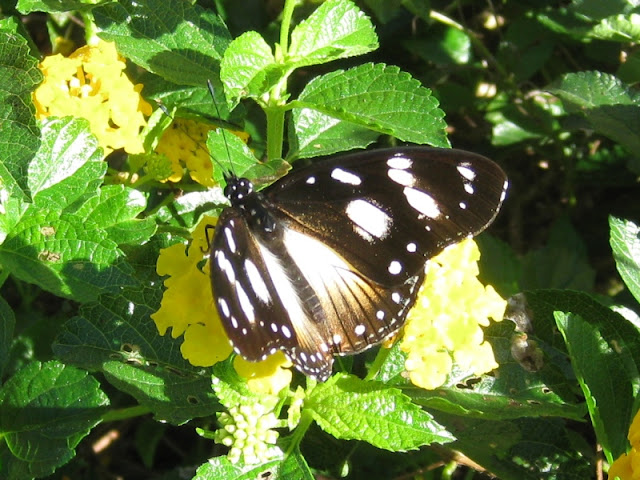 One evening when we were walking  back to our room I spotted a butterfly on the wall of the covered walkway. It was a Common Evening Brown, Melanitis leda. These butterflies tend to fly in the evening as it is going dark. When I had seen them flying on previous days I had thought that they were large moths. 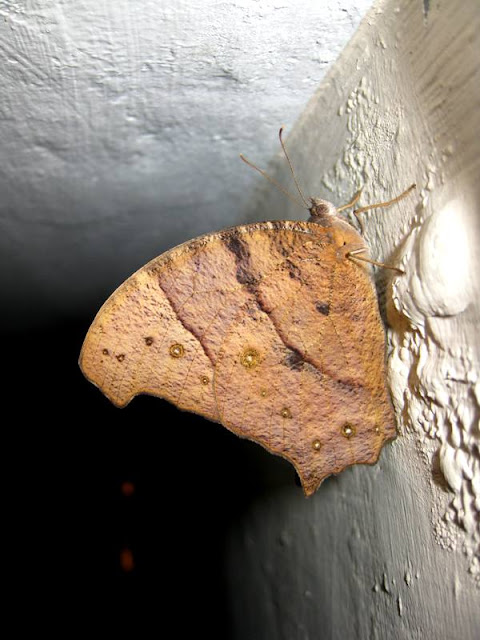 All of the above photographs were taken in the hotel grounds. We did see a number of butterflies in other places around the island, but there was never the opportunity to photograph them. Other species that I saw included the African Migrant, Catopsilia florella. This large white or yellow butterfly was quite common, but I never saw one at rest. There is a similar butterfly, Catopsilia thauruma, which comes in either a pale or bright yellow, but this is less common than the African Migrant. A couple of times I saw a Plain Tiger, Danaus chrysippus, flying past, although neither times did it land. The final butterfly I saw as the Citrus Swallowtail, Papilio demodocus, which is quite a rapid flyer. It was another butterfly that sadly didn't stop for a photograph!

We visited the Isles aux Aigrettes, which is an island nature reserve run by the Mauritian Wildlife Foundation. It is a fascinating place, where they are trying to eradicate non-native plant species and protect endemic flora and fauna. We learned a lot from their very informative guide. 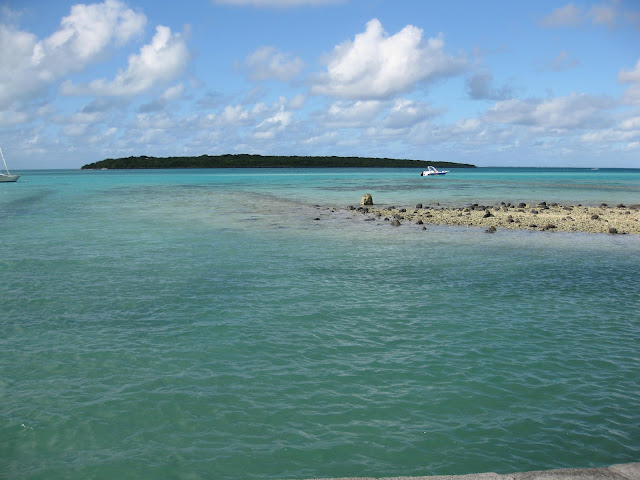 Giant tortoises have been reintroduced onto the island as they are an important link in the chain for the germination of some seeds. 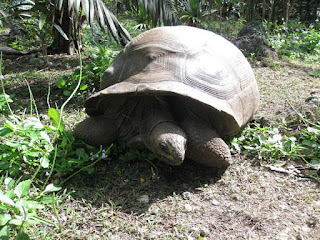 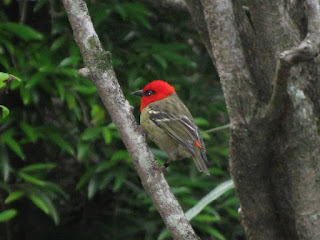 This is a Mauritius Fody. There were only a handful of them left because the Madagascar Fody had out-competed them. Now, thanks to a breeding programme they are being re-introduced onto the Mauritian mainland. 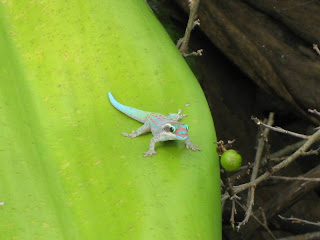 This is an Ornate Day Gecho, which is also struggling since the introduction of the rather dull gecko from Madagascar.

There were many sad stories of once numerous species that have either become endangered or extinct. The most famous of which is the dodo. This is a Pink Pigeon, which had declined to fewer than 10 individuals in 1990 before a rescue programme that has resulted in there now being over 400 on Mauritius. 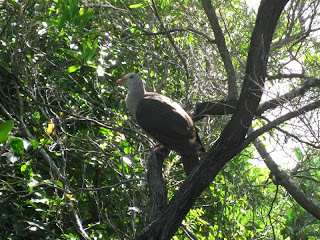 Sadly there is less than 2.5% of the native forest left on Mauritius. Much of what I had thought was native forest was made up of introduced species. The ebony forests have mostly been cut down. The last time we were there we visited the Black River Gorge, which is the main area that remains of native forest. It is a lovely area, but sadly we didn't get a chance to visit it this year. I believe that I would have seen some different butterflies if we had managed to go there this time.

The butterfly book that I bought lists 38 species on Mauritius, but some of these are rare migrants and others are now considered extinct. I think that it would be more realistic to say that somewhere around 30 species occur on Mauritius. I was lucky enough to see 17 species of butterflies, most of them new to me, which isn't bad considering it was winter when we visited! 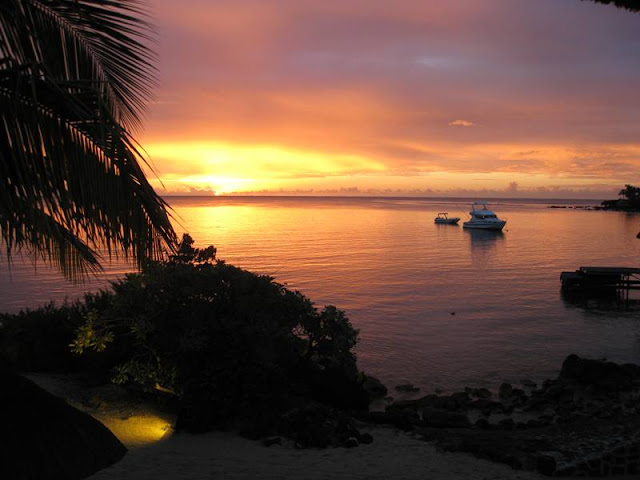 We'll definitely be going back in the future!