In my previous post I compared last year's butterfly records with the average for the previous five years.

I then realised that back in 2001 I had a job as a seasonal countryside ranger at John Muir Country Park, here in East Lothian. I used to keep a record of the butterflies I saw each day and I also walked a transect. So, I thought that it would be interesting to compare my 2001 records with the last five years. 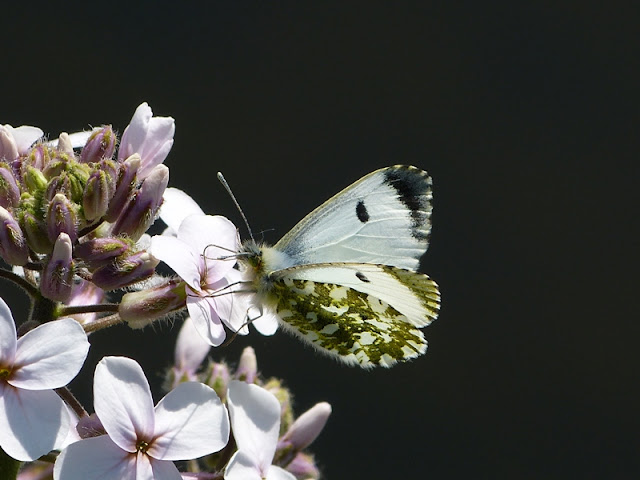 I know it is not very scientific to compare the results of one person from one site with those of several people from all of East Lothian, but nonetheless I have noticed some interesting results.

These first few graphs don't show anything too remarkable ... 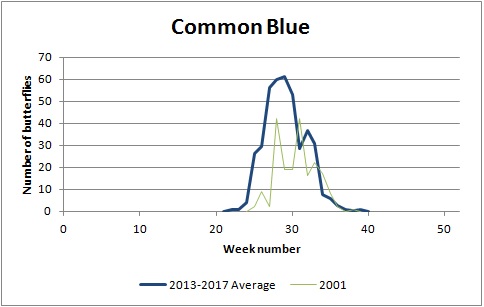 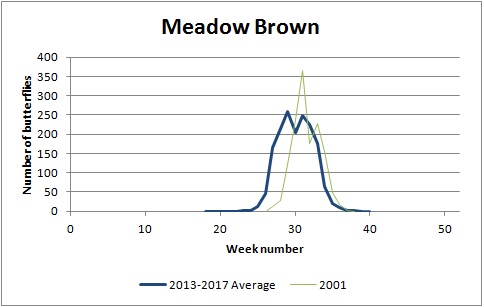 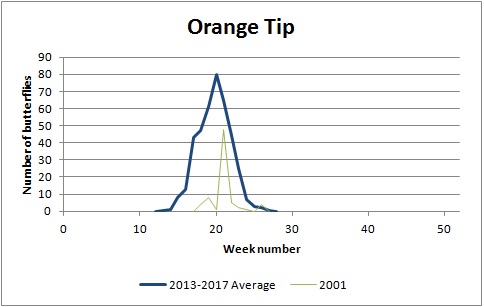 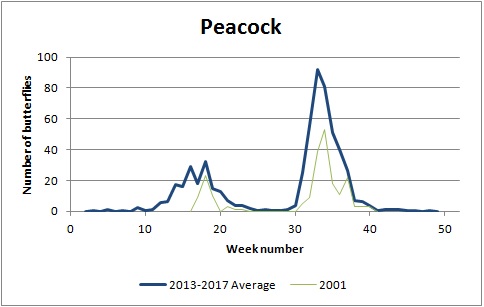 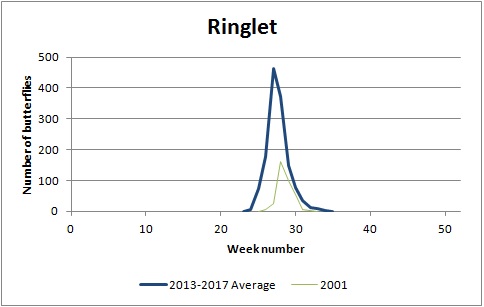 ... as I expected saw fewer butterflies than the current 20 or so recorders, although I was outside all day five days a week. However, what I notice is that my records from 2001 appear to be about two weeks later than the average over the last five years. John Muir Country Park is coastal and well known for its sunny weather, so if anything I would expect butterflies to appear there earlier than much of the rest of East Lothian.

Could this possibly be a sign of climate change?

The Green-veined White seems to be a remarkably consistent butterfly. Year on year its numbers don't appear to change much. 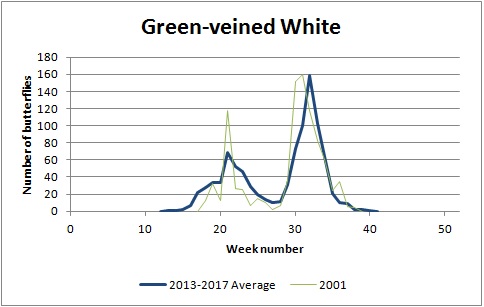 And I was interested to see how few Large Whites I saw. They certainly seem to be more common these last couple of years than I remember them being in the past. 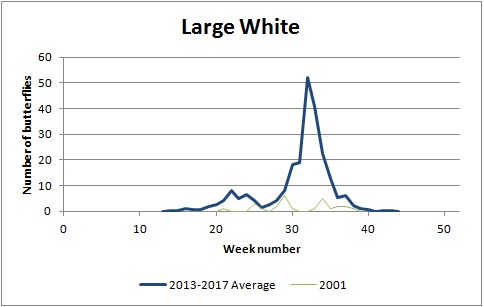 The Red Admiral has certainly become more common over the last few years. It now appears to be able to survive the winter here, but in 2001 I didn't see any until the end of June. 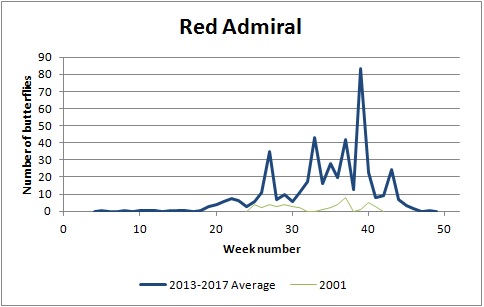 And I had the impression that there are fewer Small Coppers around these days than there used to be. My records from 2001 appear to confirm this. 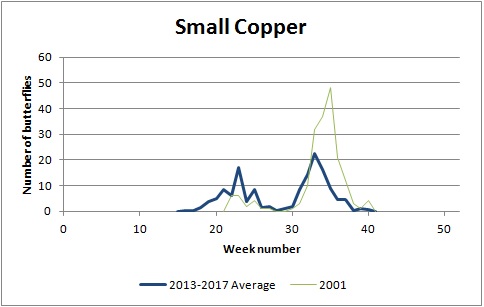 The Small Heath intrigued me when I worked at John Muir Country Park. They appeared to have a very much shorter season there than elsewhere in East Lothian where I was surprised to see them several weeks after they had finished at John Muir Country Park. Checking the more recent records, from 2010 Small Heaths appear to have a much longer season. It makes me wonder if they used to have one generation a year, but now can manage two. 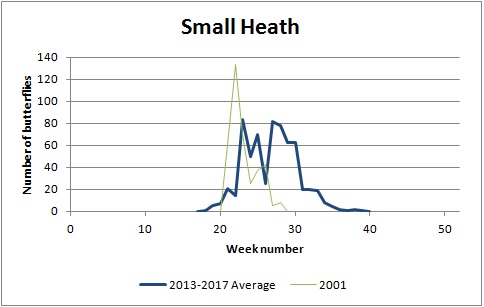 The Small Tortoiseshell used to be a very common butterfly, which has declined quite seriously in numbers over the last few years. It is amazing to see how many more there were in 2001. 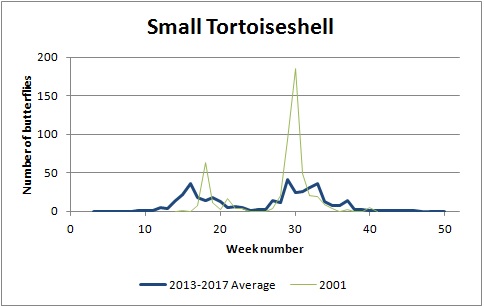 In contrast it appears that the Small White is more common these day than it was back then. 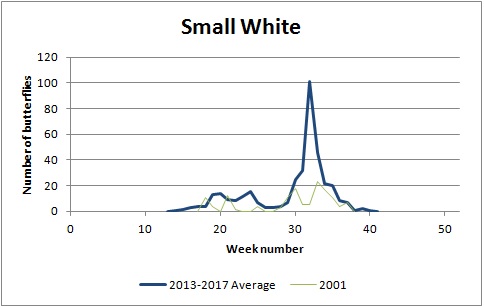 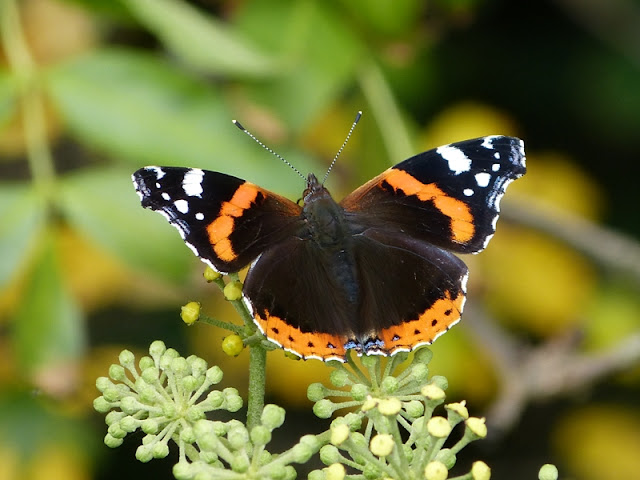 I was wondering if my mind was playing tricks on me, but my recollections appear to be backed up by the figures. What we can't be clear about is the cause of these changes. It is easy to jump on the climate change bandwagon, but it might just be the cause.

I promise, there will be no more posts containing graphs this year!!
Posted by Nick Morgan at 20:32