On Monday 29th April I went on my planned trip to El Torcal de Antequera. This is an area of amazing limestone formations and the pictures I had seen of the Natural Park looked very promising, with valleys of wild flowers and weathered rock formations. I decided to leave early as the forecast promised sun in the morning, until about 11am and then it was to cloud over before rain later in the afternoon.

Before any such visit I normally spend some time looking at Google Earth and Streetview to see if I can spot any promising locations. My first planned destination was on the south side of the mountains, but when I arrived at the track I was intending to walk along it was completely cloudy, 9 degrees and there was a strong wind blowing. There was some blue sky around, so I decided to press on regardless. I was very pleased to have a cheap fleece top, that we had each bought on arrival in the village! As I walked, I grew more frustrated at the weather. I thought that even if the sun did come out, the cold wind would still mean that butterflies were unlikely to fly. After a while, it dawned on me that the clouds were being formed over the mountains and just sitting there. As one area of clouds blew away more rolled in behind. I therefore decided to give up on this site, thinking that maybe I could try again in the afternoon when the sun would have swung round away from the mountains. 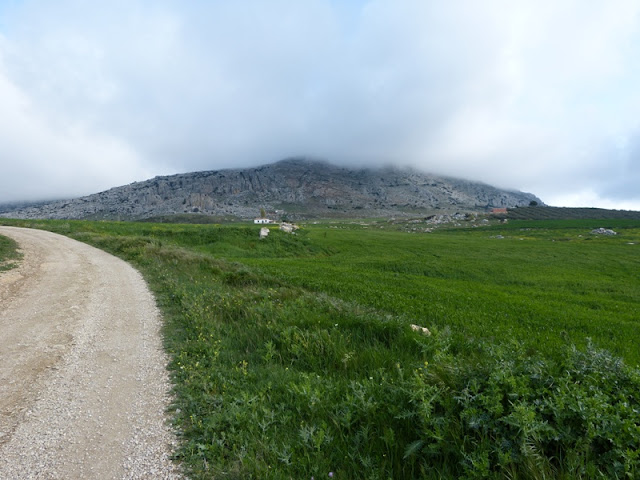 So I drove to the El Torcal Natural Park. My intention had been to park at the bottom of the entrance road and then walk up to the visitor centre, but the weather was so miserable that I just drove up to the main car park, which was surprisingly busy. Everyone else was dressed as if they were going on an arctic expedition and I felt quite self conscious in my thin fleece. It was 7 degrees up at the car park, still cloudy and windy. 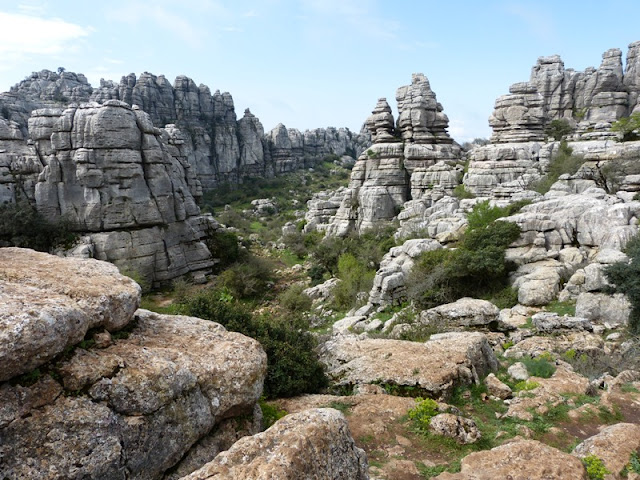 I decided to walk the Yellow Route, which promised panoramic views and I noticed that there appeared to be more sun on the north side of the mountains. So, after my 2.5 kilometre loop of very interesting rock formations, mostly dotted with people climbing up them, I jumped back in the car and drove around to the north. It did appear that the mountains were holding the clouds, and as I rounded a corner the sun came out.

I stopped at a likely looking area, and started to follow a track that appeared to head west, parallel with the mountains. It was interesting to see that there was a fence running next to the path and goats were grazing the lower slopes of the mountain. Luckily they were not on my side of the fence and I was treated to a fantastic display of wild flowers. Initially, not many butterflies, though. 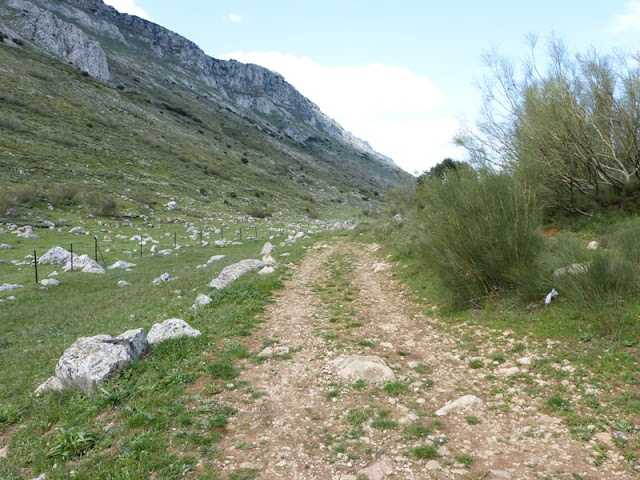 The track turned a corner that then went through some fields of wheat. I was beginning to wonder if this wasn't going to be such a good spot, after all, but I saw a distant white butterfly so decided to continue. I caught up with it and saw that it was a Small White, Pieris rapae. At least it meant that it was warm enough for butterflies, though. 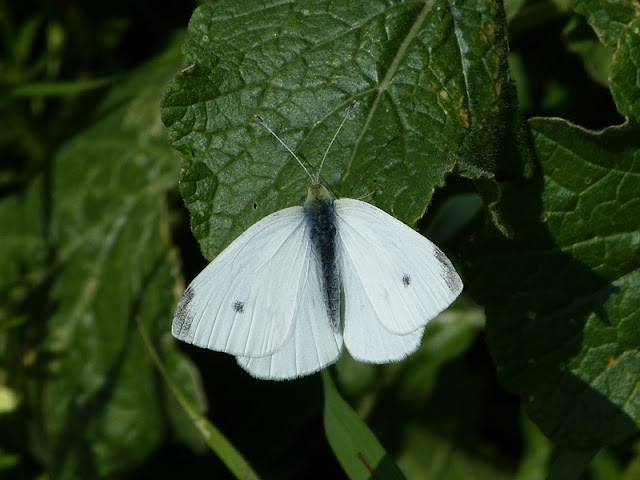 The track then went back into another lovely area of wild flowers and scrub and I was delighted to see a Spanish Marbled White, Melanargia ines, which I watched for some time. 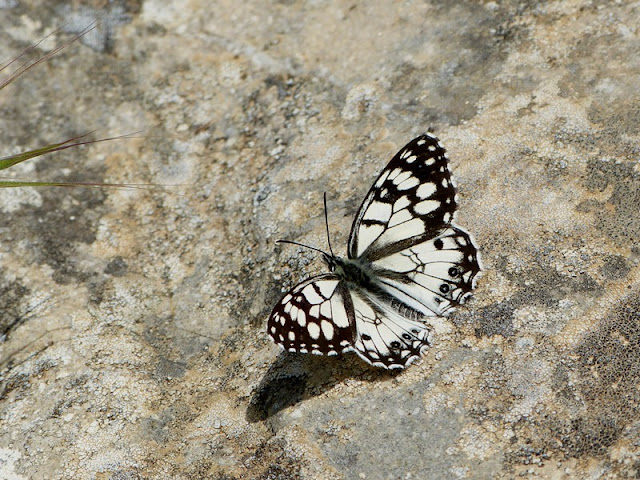 It wasn't until I had returned to Scotland, and I was looking at my photographs, that I discovered that I had also taken pictures of a Western Marbled White, Melanargia occitanica. It has subtly different markings on its wings. 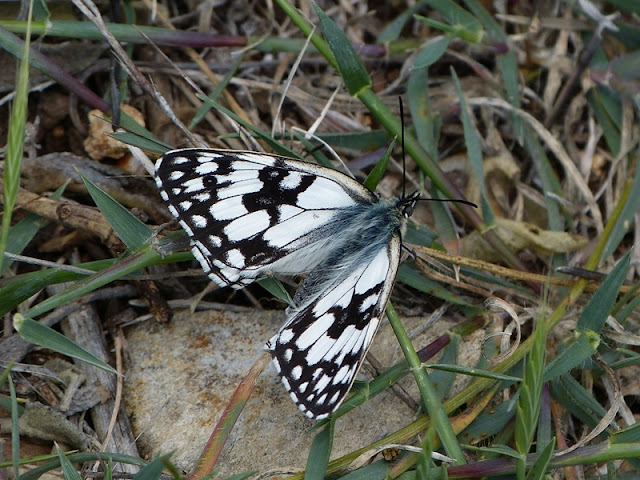 A couple of Clouded Yellows, Colias crocea, and more Small Whites appeared in this section. 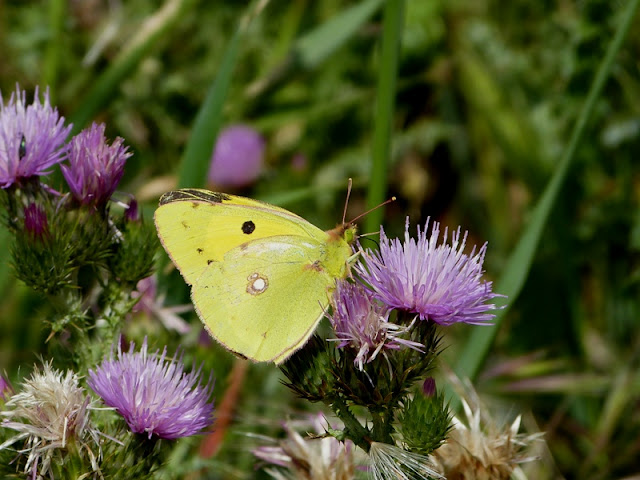 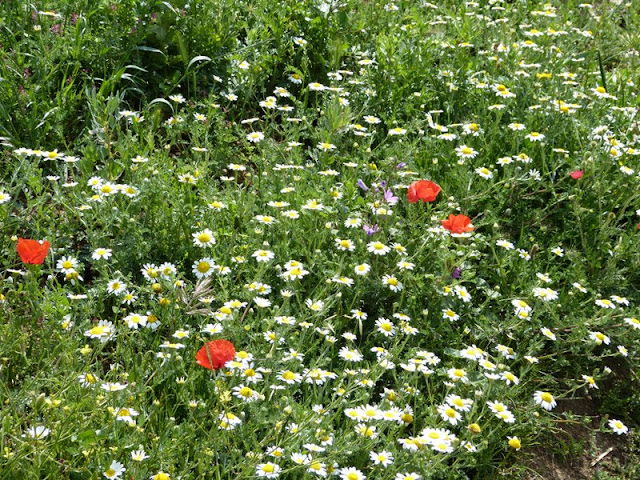 Continuing further along the track the vegetation became shorter and then it followed the edge of some arable fields. When the track joined another track I decided that I really needed to turn around in order to get back to my wife when I said I would.

I followed a little butterfly and saw that it was a Small Heath, Coenonympha pamphilus, then this Dappled White, which I am still not 100% sure if it is Western or Portuguese. 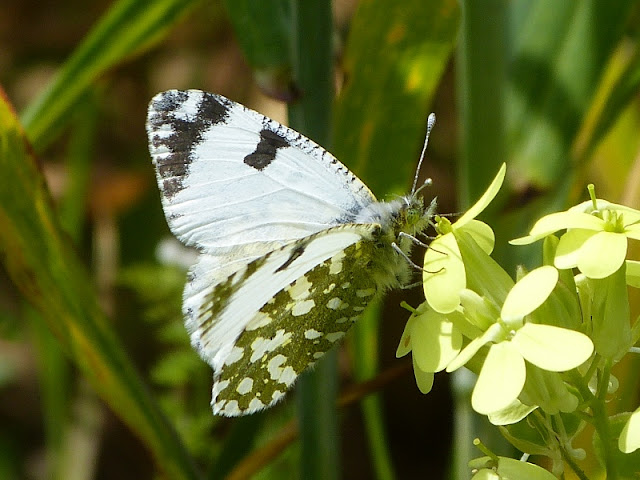 The Small Whites and Clouded Yellows were out in force now and I saw the occasional unidentified white or blue butterfly. The sun kindly went behind a cloud for a while, which was enough for one of the smaller whites to stop flying. It turned out to be a Green-striped White, Euchloe belemia, - one of my favourites. 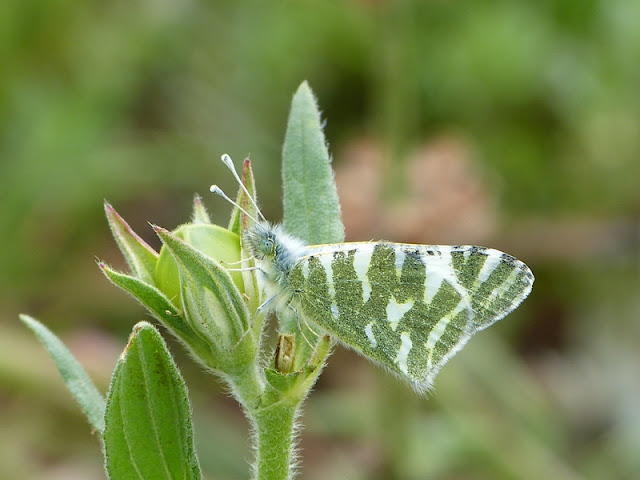 I was now off-piste, so I looped back to join the track, spotting a small blue butterfly in the process. After much following, it stopped for long enough for a picture and an ID of Southern Blue, Polyommatus celina. 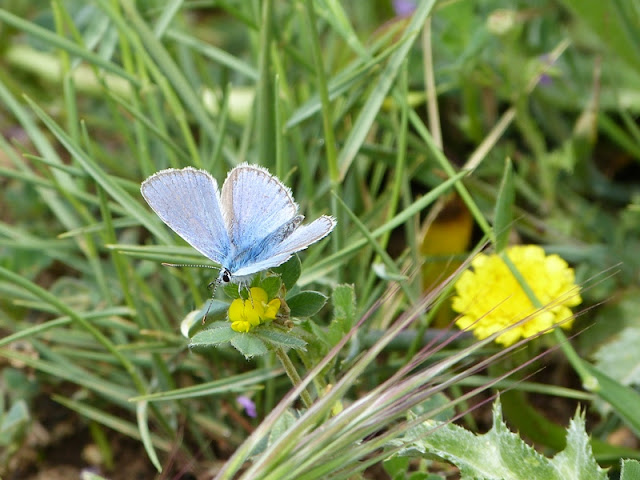 I was now very off-piste and struggling to locate the track. As I pushed through some Lavender bushes a small insect flew away, which, when it landed I saw was a little blue butterfly - Panoptes Blue, Pseudophilotes panoptes. I found myself saying, "Oh yes, brilliant!" out loud and then hoped there was no one anywhere near! 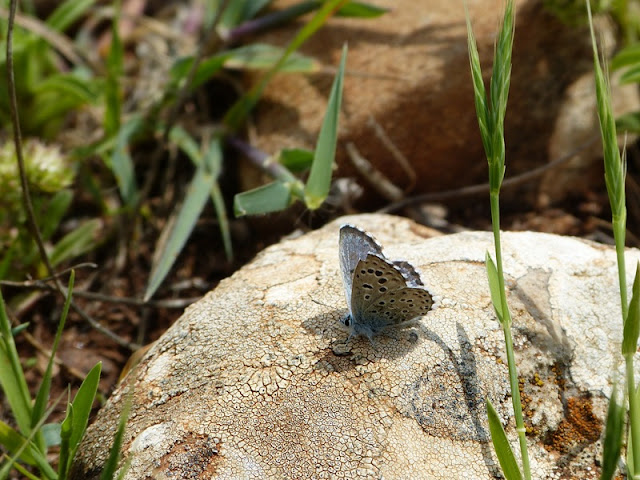 The first I saw was a male and then it magically turned into a female as I tried to follow this diminutive little butterfly. They were both very obliging, staying in one spot for long enough for me to manage to photograph them. This was the first time I have ever seen this species and it is a butterfly that I have long wanted to see. 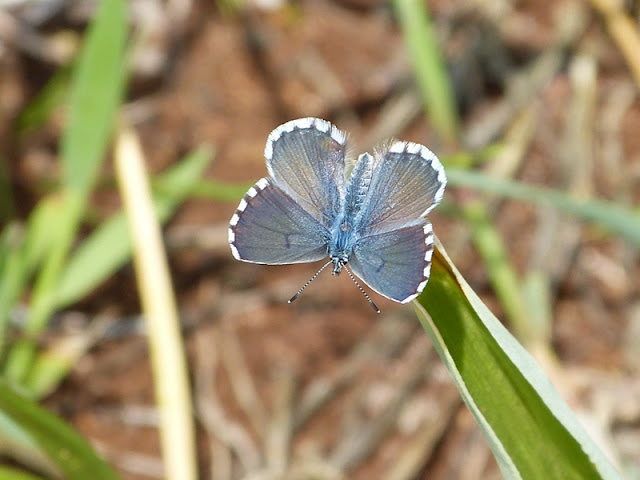 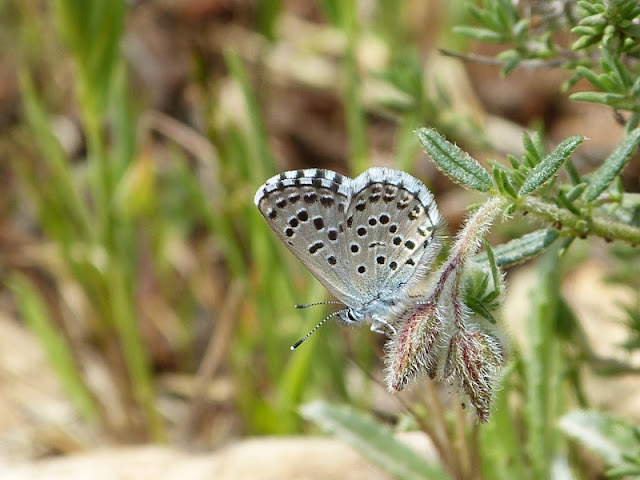 What a difference from a few hours ago when I was cursing the weather! I managed to relocate the track and started to walk back towards the car. However, it was as if someone had switched on the butterfly switch and they were everywhere. Mostly more Small Whites, Clouded Yellows and Spanish Marbled Whites. But then the occasional blue, some Black-eyed Blues, Glaucopsyche melanops. 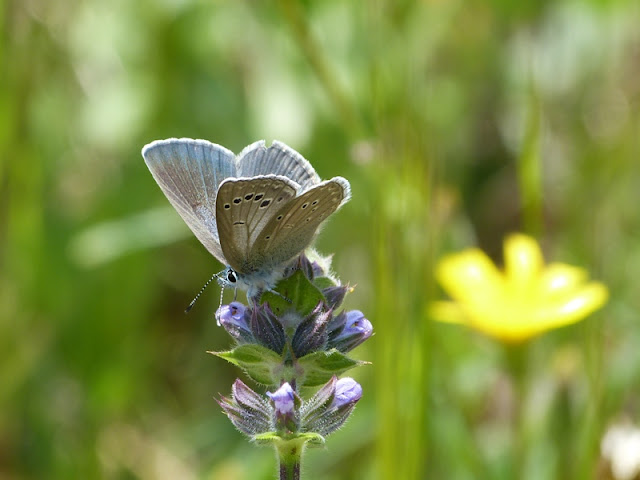 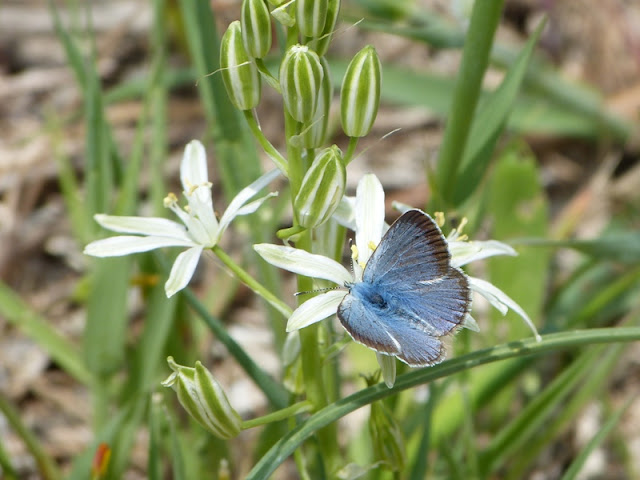 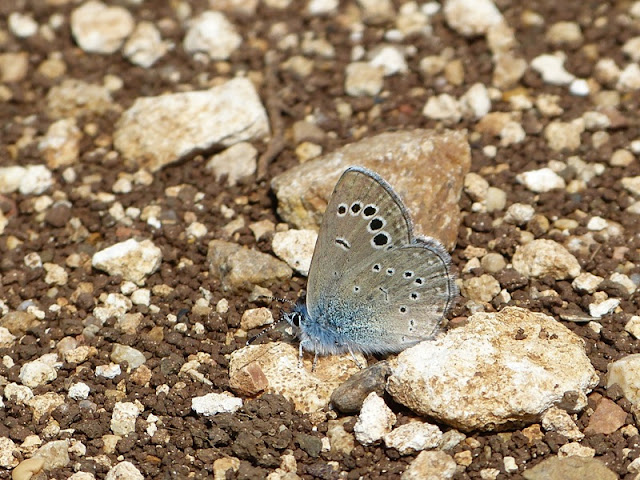 And then another really small blue, which turned out to Lorquin's Blue, Cupido lorquinii. 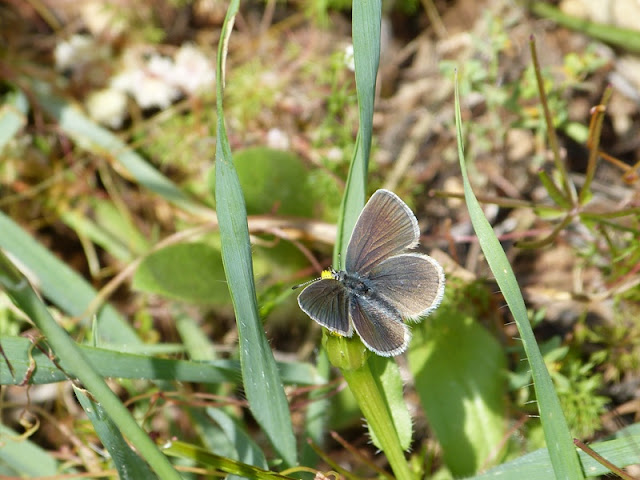 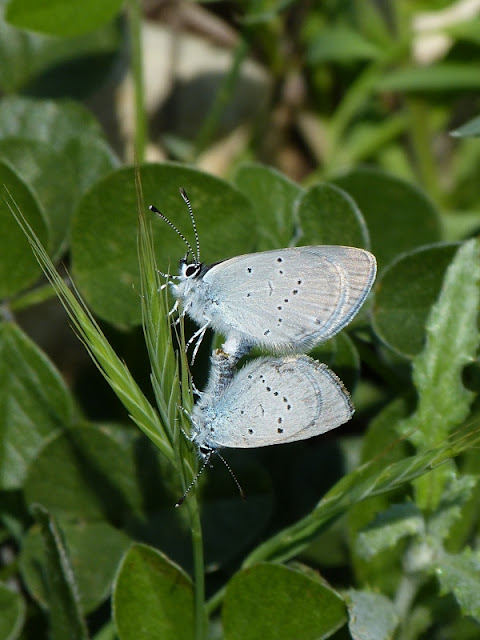 As I was photographing them I thought that I saw a couple of large moths flying nearby, but they turned out to be quite faded Spanish Festoons, Zerynthia rumina! 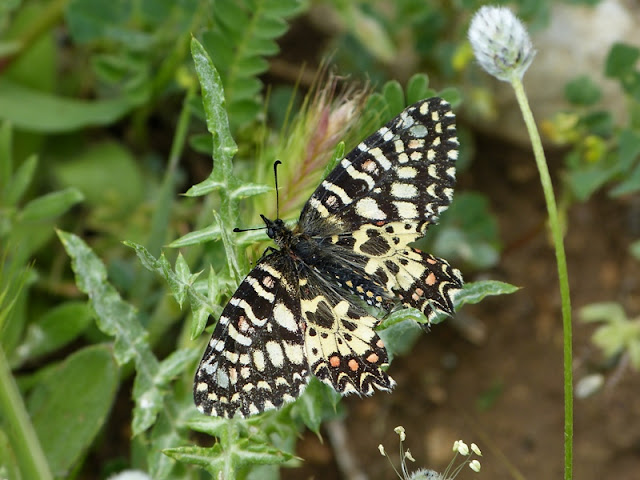 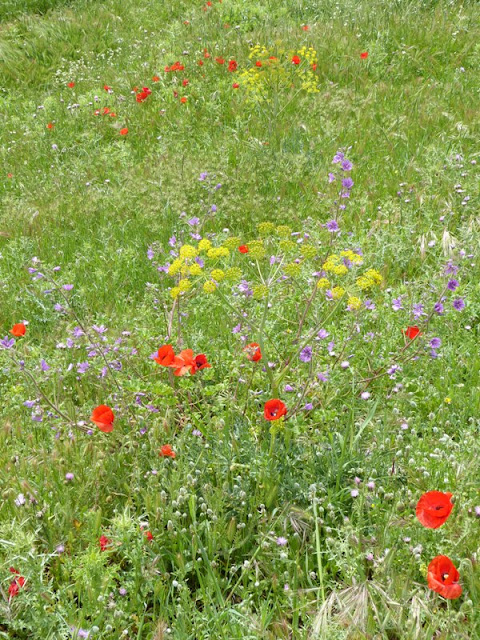 I dragged myself away from this magical spot and back through the wheat fields towards the car, only to discover that the area of short vegetation around the car was attractive to more Panoptes Blues. I saw at least six there, along with some Small Coppers and Southern Brown Argus, Aricia cramera. 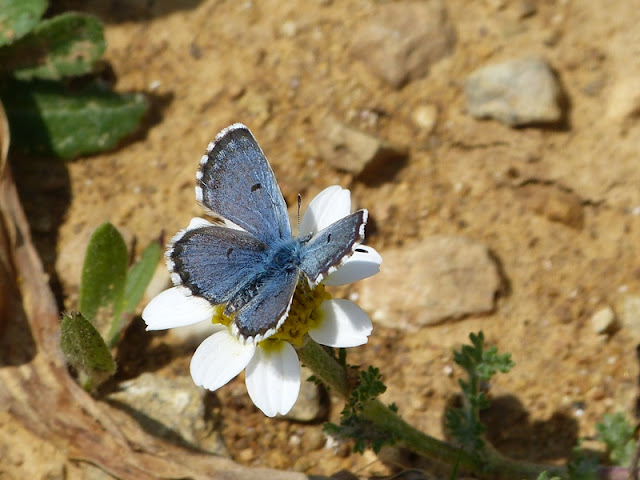 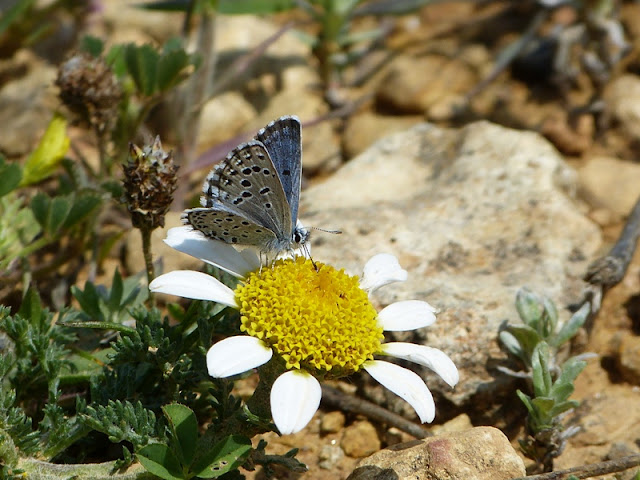 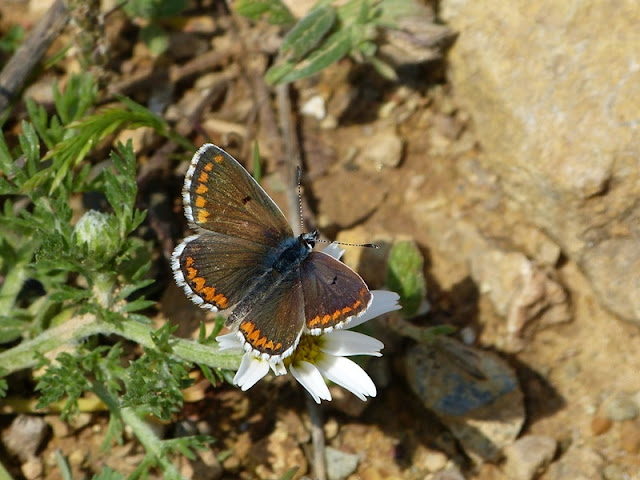 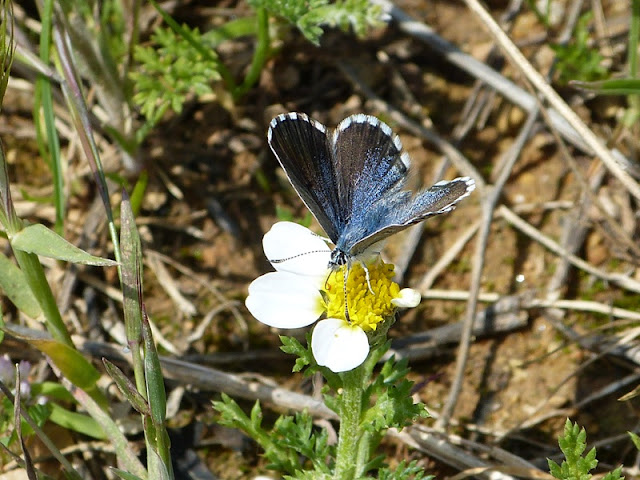 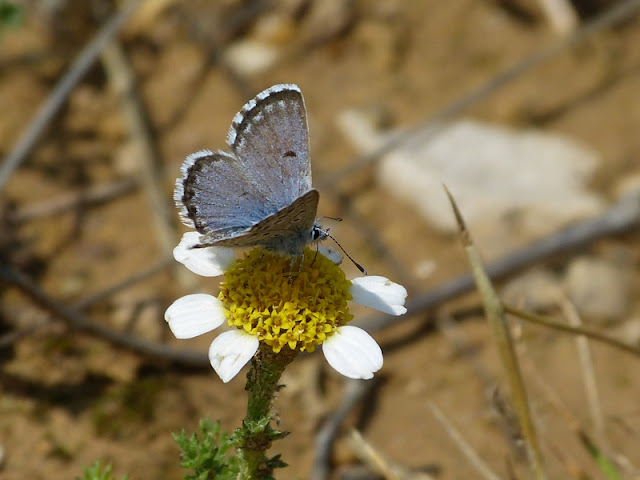 I returned to the apartment feeling very satisfied with my day out looking for butterflies. When I arrived back in Alora, I parked in the main car park and walked past a very overgrown rose bed. And there was an African Grass Blue, Zizeeria knysna, flitting about. As I was running a little late, I decided not to photograph it, but to leave it for another day. Sadly that was the last sunny day of our holiday, so I didn't get a chance. Never mind, my wife has just booked the apartment again for September!!