Menorca is a small island in the Mediterranean Sea. There are about 25 species of butterflies occurring there with another five or so having been recorded as vagrants. We spent two weeks there in the summer of 2010, staying in an old farm house near the centre of the island. Attached to the house was an orchard, (where my daughter counted 19 different kinds of fruit trees) which turned out to be the perfect place for butterflies. I wasn't expecting to see too much, but I was to be pleasantly surprised. 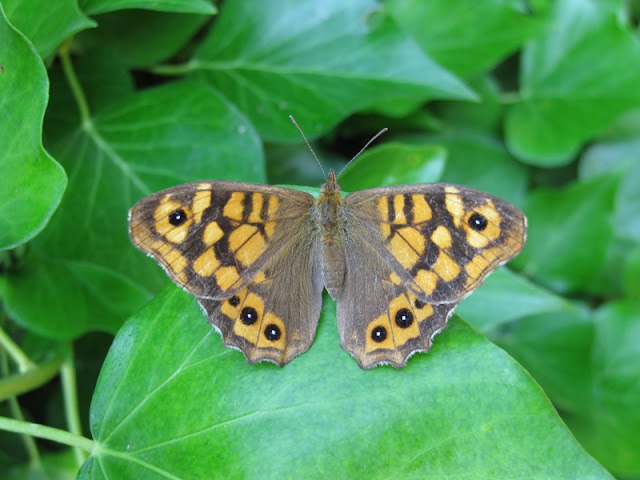 We arrived in the evening just as the sun was going down, but there were still some Speckled Woods, Pararge aegeria aegeria, flying by the house. These proved to be very common flying anywhere with a bit of dappled shade. 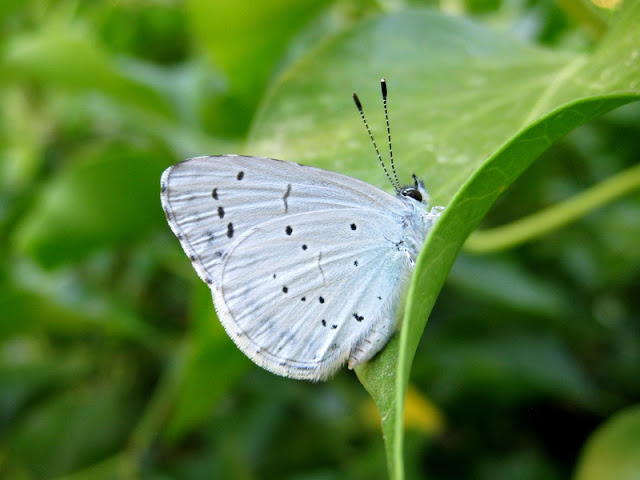 Probably even more abundant than the Speckled Woods were Holly Blues, Celastrina argiolus. I was delighted to see so many of them living along the ivy-covered walls of the orchard. 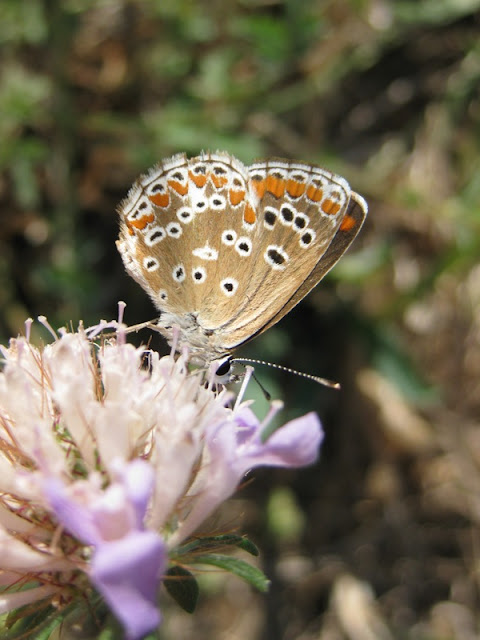 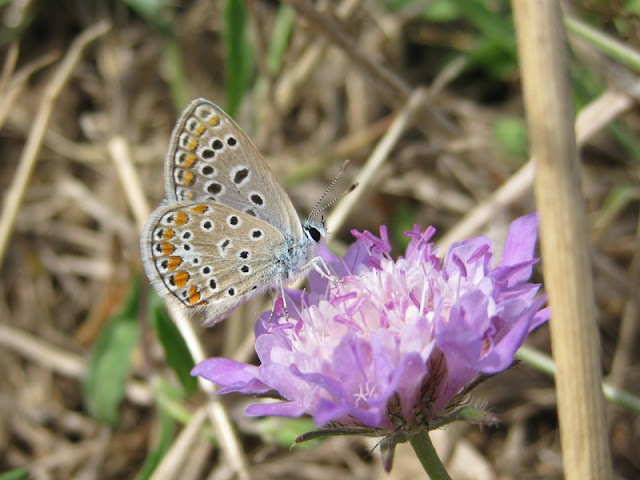 ... along with a few Common Blue, Polyommatus icarus. 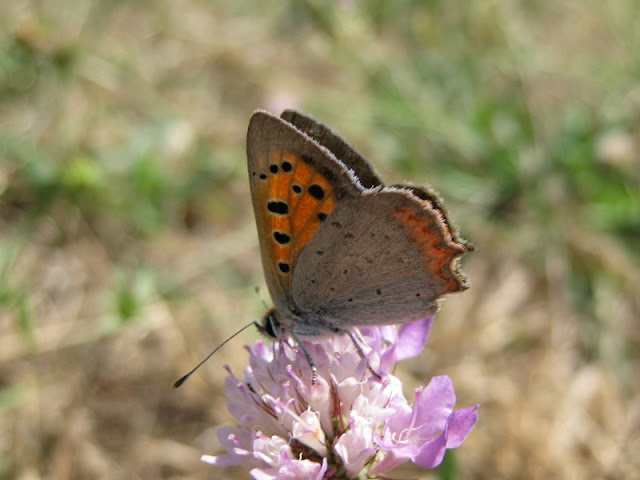 The Small Copper, Lycaena phlaeas, was less common, but still a lot more abundant than in Scotland. 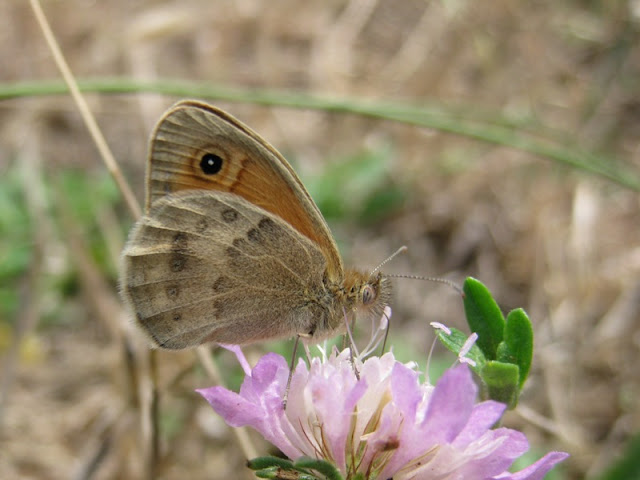 I am used to seeing Small Heaths, Coenonympha pamphilus, on coastal grasslands and moors in Scotland. They seemed a bit out of place to me in the orchard. Back home they also tilt their wings towards the sun whenever they land in order to catch as much warmth as possible. In Menorca they always faced into the sun so as to catch as little sun as possible! 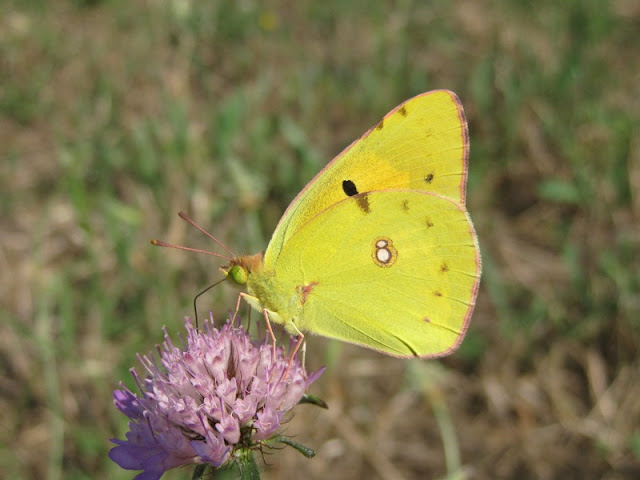 I was pleased to see a lot of Clouded Yellows, Colias croceus,  in the orchard. They seemed a lot less timid than those I had seen in Portugal. 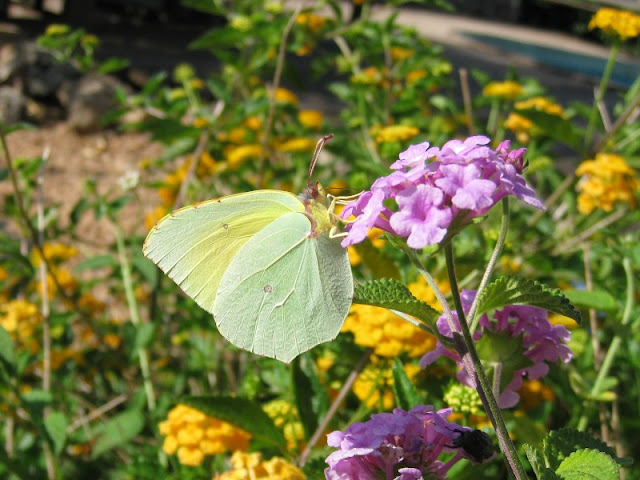 The other yellow butterfly that occurs there is the Cleopatra, Gonepteryx cleopatra. These have a lovely flash of orange on their upper wing, but they always rest with their wings closed so it is only visible when they are flying. They also have an amazing ability to blend into the ivy when they roost at night. 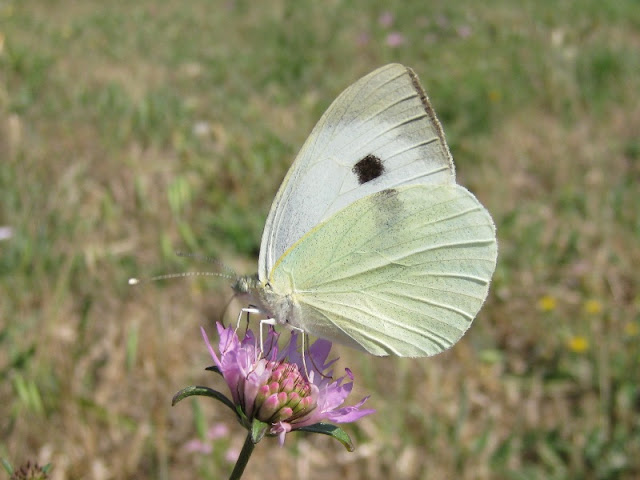 As in most places in Europe, Large Whites, Pieris brassicae, were fairly common. 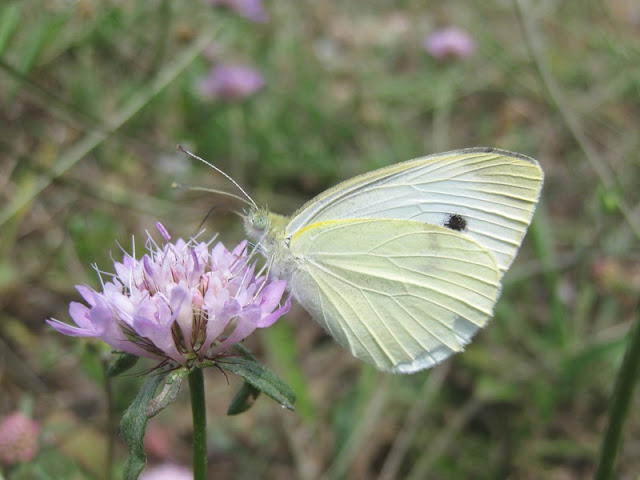 I saw one or two Small Whites, Pieris rapae, too. 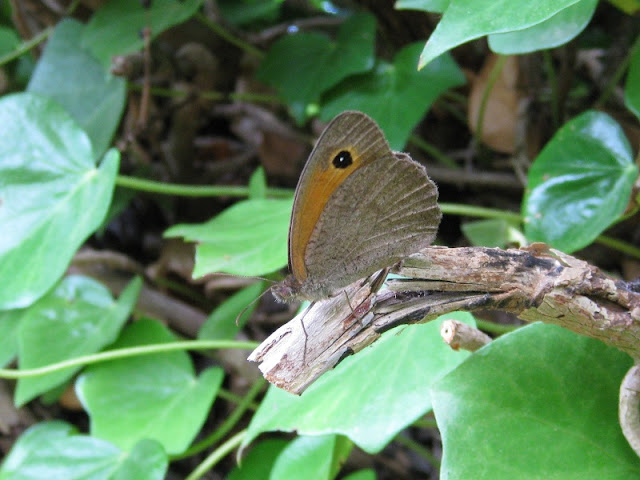 A familiar sight in Scotland, but not so common on Menorca is the Meadow Brown, Maniola jurtina. 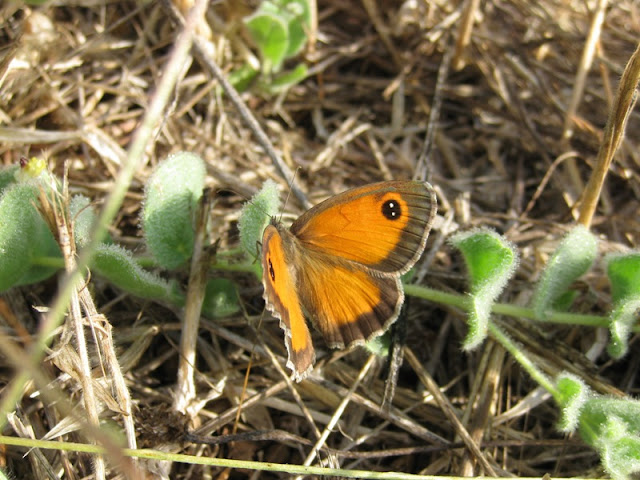 I spent ages following a Southern Gatekeeper, Pyronia cecilia, along the Alengdar Gorge, but it just wouldn't settle long enough for me to take a photo. This one appeared in the orchard and was much more obliging. 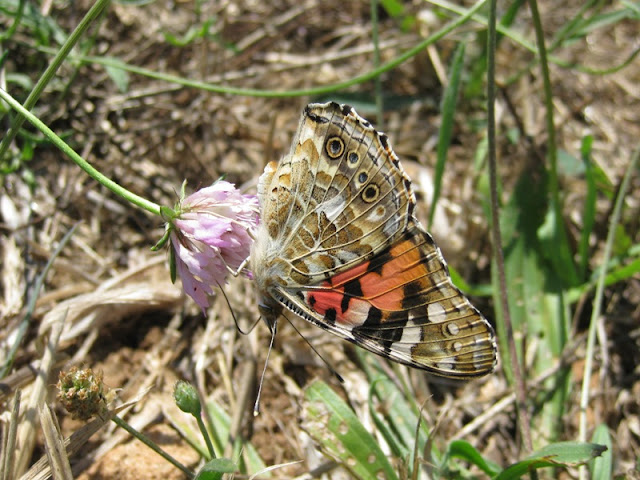 What I assume was the same Painted Lady, Vanessa cardui, always appeared in one particular area of the orchard. 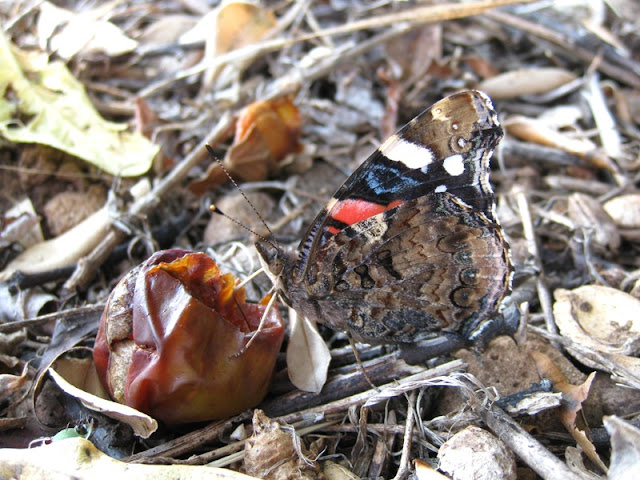 Red Admirals, Vanessa atalanta, enjoyed the fallen fruit. They are amazingly well camouflaged when their wings are closed. 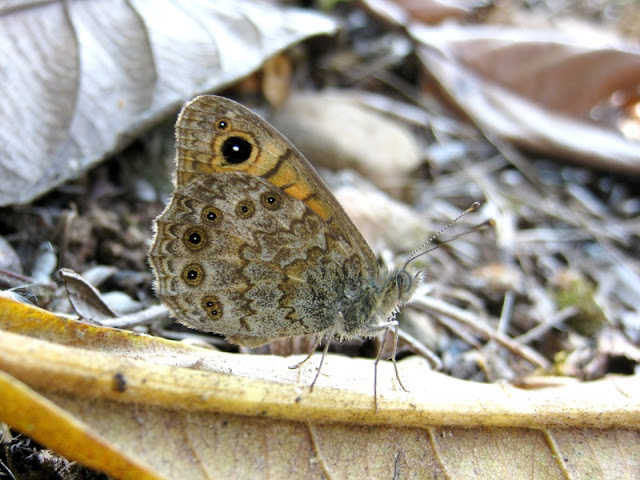 Having only just discovered Wall Browns, Lasiommata megera, back in Scotland it was funny also finding them in Menorca. As with most of the butterflies I saw there, they rested with their wings closed, whereas in cooler Scotland they tend to rest with their wings open absorbing the sun's rays. 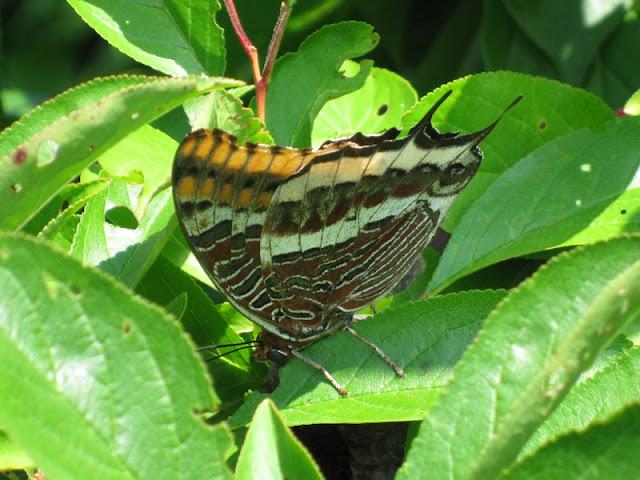 This is the best picture I could manage of a Two-tailed Pasha, Charaxes jasius. These are amazing butterflies with a really powerful flight. It was great watching them gliding amongst the fruit trees. 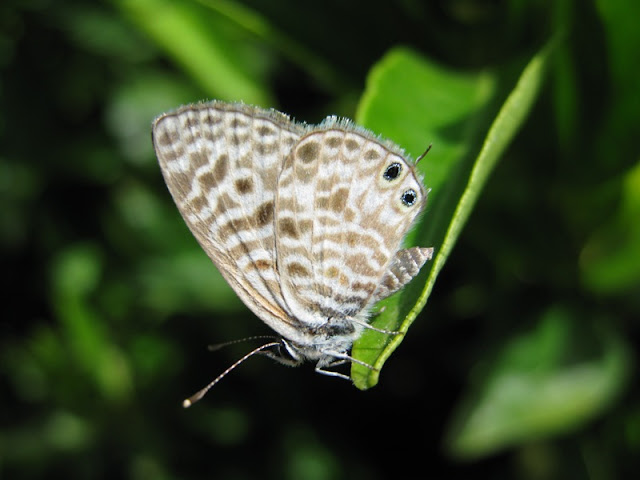 On the last day of our holiday this Lang's Short-tailed Blue, Leptotes pirithous, visited a bush next to the swimming pool were it remained for most of the day.

The other three species that I saw, but wasn't able to take a picture of were a Long-tailed Blue, Lampides boeticus, a Swallowtail, Papilio machaon and a Geranium Bronze, Cacyreus marshalli, making 20 species for the trip. This was a lot better than I had expected. What Menorca lacks in variety of species is more than made up for by the number of butterflies in the air.
Posted by Nick Morgan at 23:24