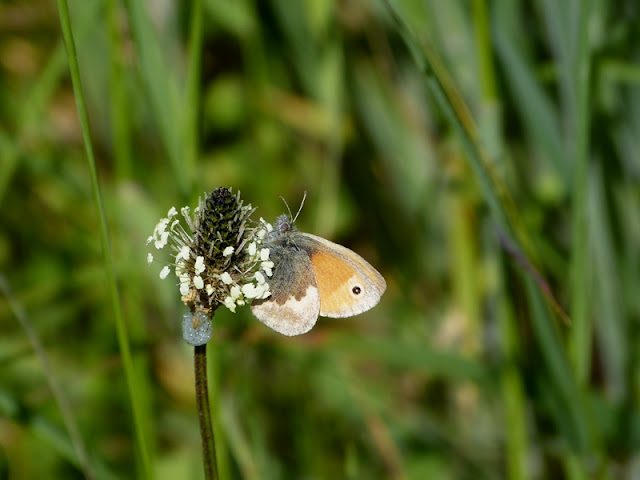 The Small Heath is a common butterfly along the coast in East Lothian and it is also found in the Lammermuir Hills. This year they appeared to do as well as ever and I saw over 50 of them during a visit to John Muir Country Park in June.

Holly Blue, Celastrina argiolus
Holly Blues have been recorded right on the western fringes of East Lothian for some years now, but last year I was excited to hear that a new colony of Holly Blues had been found in the coastal village of Aberlady, about 15 kilometres east of the original colony. When I checked this out I found three individuals, so it wasn’t a big colony! This year, despite several visits, I didn’t see any there. However, on 23rd May one was spotted a short distance away in Gullane and two days later I received a record of one five kilometres further along the coast. I live in hope that there is a colony somewhere around that area and that if we have a better summer next year I will manage to see them again.
Sadly, I heard no Holly Blues were recorded at the original site near Musselburgh this year and it is feared that they may have perished due to the poor weather. I really hope for better news next year. 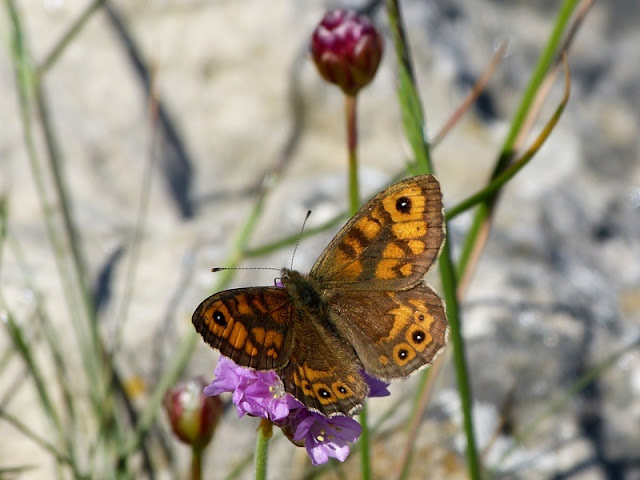 Wall Browns were first recorded in East Lothian two years ago, having worked their way up the east coast of Scotland. Last year they extended their range only a few metres, but this year they seem to have moved even further up the coast. The first one I saw this year was on 25th May near the boundary with the Scottish Borders, but later in the year I received several reports of them along the next five kilometres of coast. I am hopeful that they will continue to expand their range over the next few years as there is a lot of good habitat further along the coast. 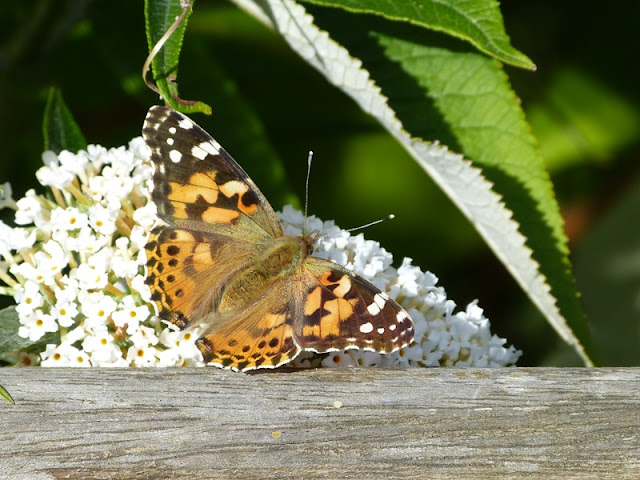 2012 was not a good year for Painted Ladies in the UK. I received one record on 1st June and two in August. I was beginning to think that I wouldn’t see one myself, but on a warm day in September I found one in amongst some Red Admirals and Small Tortoiseshells feasting on some buddleia. This was to be the only Painted Lady I saw in 2012. 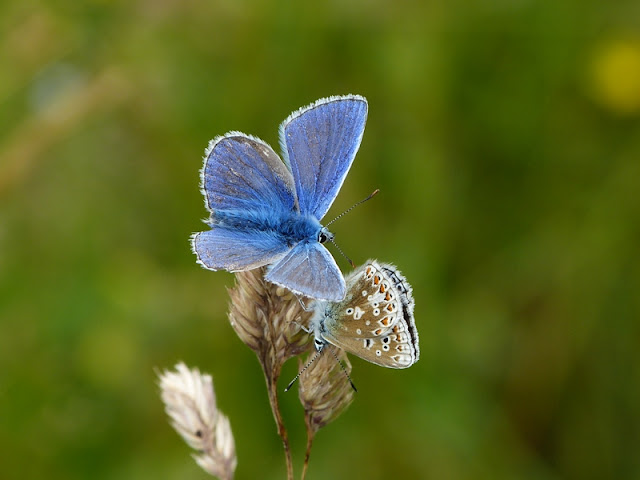 The Common Blue seemed reasonably unaffected by the weather. It is a butterfly that can be locally common at some coastal sites and disused quarries. This year I specifically went to look for them where I knew I had a good chance of finding them, so I may have a false impression of how many there were. The first ones I saw were on 14th June at an area within John Muir Country Park in an area that is the first place I look for them each year. 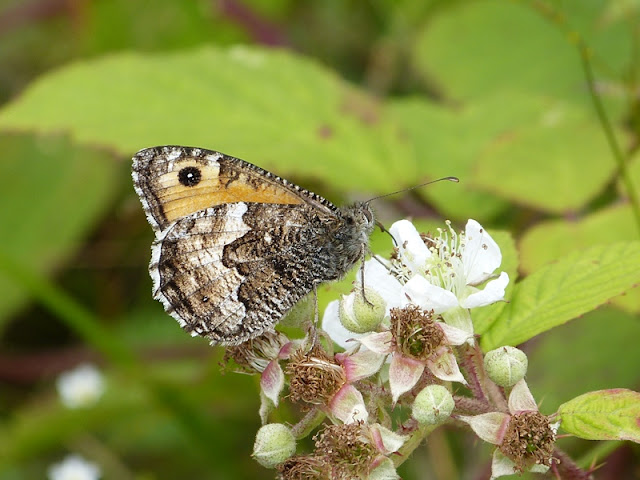 The Grayling is a butterfly that may have quietly been living unnoticed in East Lothian for a few years. After hearing rumours that there were some living on an old railway siding in an ex-opencast coal mine, I checked the area out last summer and immediately spotted one. Later in the year some were reported on a re-landscaped mining spoil heap less than a kilometre away. This year I checked out the railway siding on 29th June and despite the wind I saw one Grayling. In July I checked out the spoil heap and saw over 40 of them, so they now seem to be well established in the area. There were also two records of individuals at two sites on the coast. 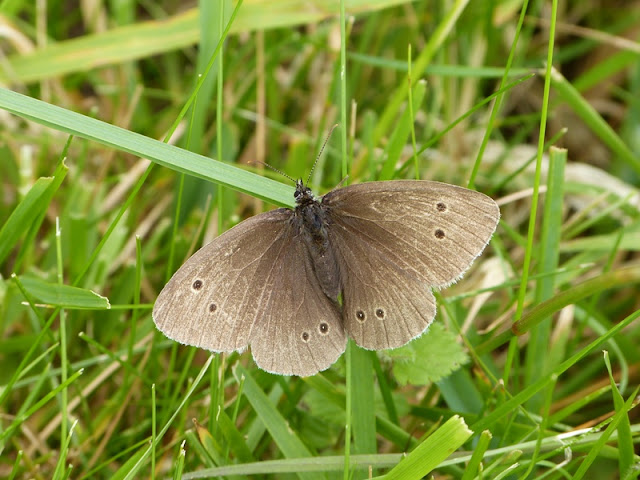 Ringlets tend to occur in damp grassy areas, and normally start to appear in late June. This year I didn’t see any until 3rd July when I counted 16 on my transect. Luckily for them, this was after the worst of the wet weather, and just after the first floods, so their numbers weren’t that much lower than normal. They tend to be quite a short-lived butterfly, and their numbers tend to drop off by early August, but this year they were still being noted in the third week of August. So, it seems that they delayed their whole adult life by two weeks. 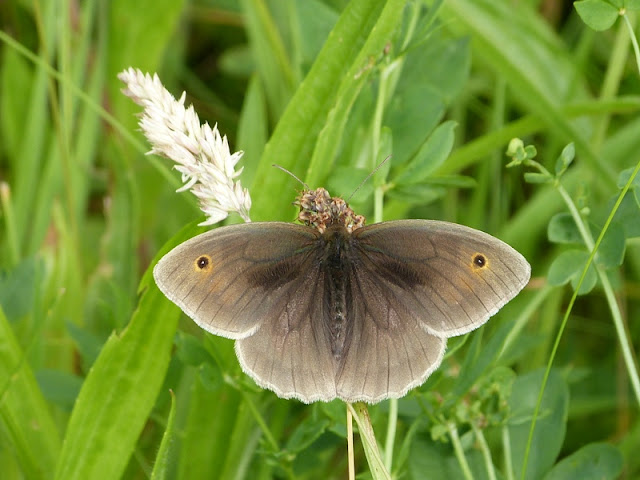 The emergence of Meadow Browns was also two or three weeks later than normal, and although their numbers were low to start with they picked up later in the season. I recorded my first one this year on 17th July. If anything, I think this season was better than average. 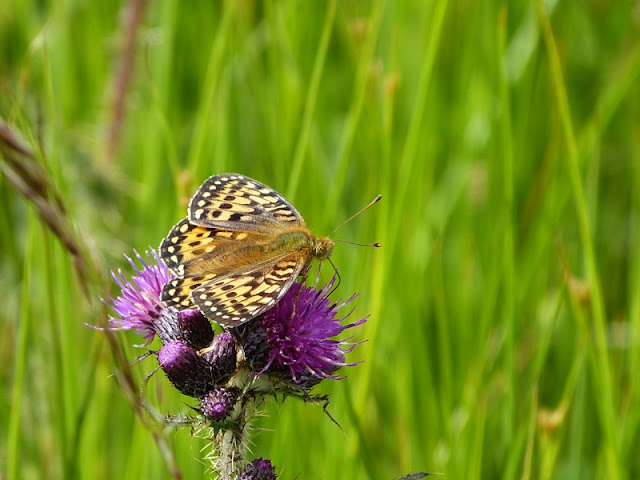 Along with the other two butterflies above this butterfly was about three weeks later than normal. The first record I have for this year is the 27th July, but normally they would be seen at the end of June or early July. Once they did appear their numbers seemed about normal. 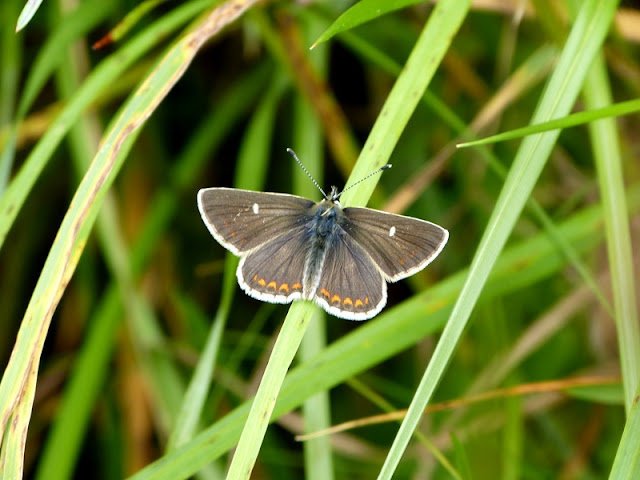 Northern Brown Argus tend to live in small colonies based around their food plant – the Rockrose, Helianthemum nummularium. The adults tend not to fly any distance from the areas where Rockrose grows. I am only aware of three sites where there are colonies of Northern Brown Argus in East Lothian, although I am sure there must be others still to be discovered. Adults normally start to appear in mid-June, but I didn’t get to a site just inside East Lothian until 26th July when I saw a good number of them.

That was 20 species of butterflies recorded in East Lothian this year. Not bad considering the appalling weather. I was constantly amazed that butterflies appeared after fairly long periods of cold wet weather. Numbers of most species seemed to be down on normal, but hopefully they will bounce back if we have a summer next year!

The two species that seem to have suffered were the two that are probably the rarest. Holly Blue numbers were down and we didn't record any Small Skippers. Last year was the first year that Small Skippers were recorded in East Lothian. I hope we see them again soon.