On 1st July I decided to walk up the hill behind our villa. For the first one and a half kilometres I walked along a narrow road and then tracks through olive groves and past houses. I only saw a Meadow Brown and a Skipper while I was walking this section, which didn't bode well! 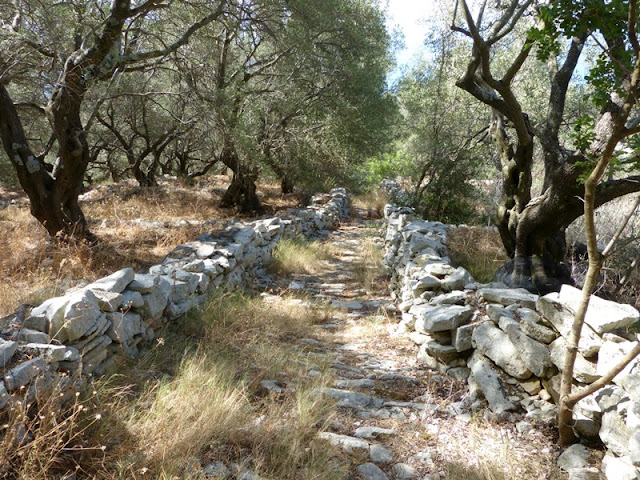 However, I then turned up a track past a tumbled down farm house and as I left the olive groves, I immediately started seeing great numbers of butterflies. First off, in the shade of some trees were what I think were some Southern Graylings, Hipparchia aristaeus. 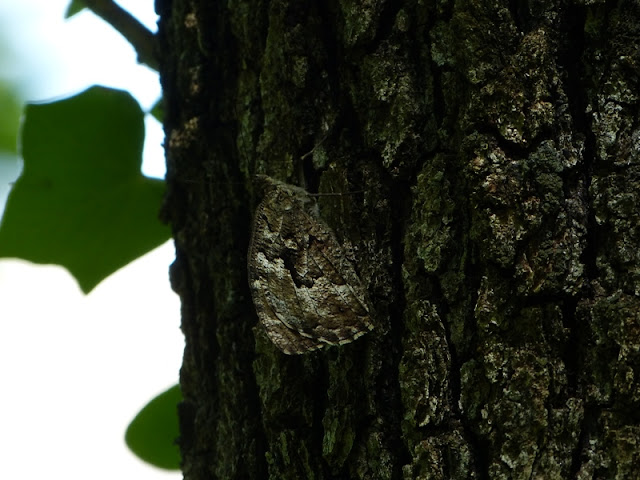 In this same area there were also a couple of Meadow Browns, Maniola jurtina. 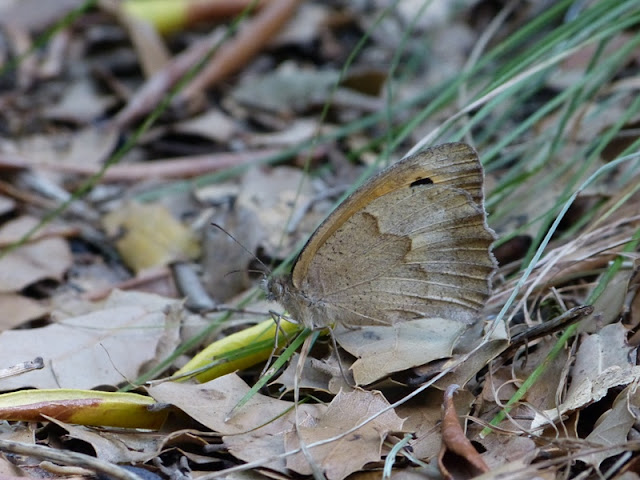 High up on a banking of brambles, there was a Silver Washed Fritillary, Argynnis paphia, and a Sage Skipper, Syrinthus proto. 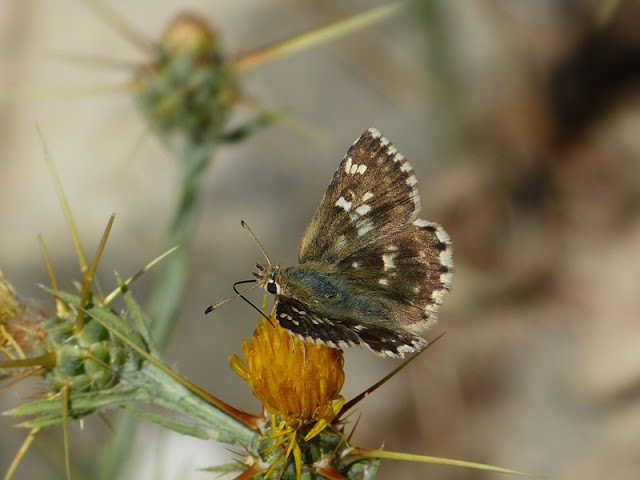 As soon as I was back out into the light there were Wall Browns, Lasiommata megera, all along the track. 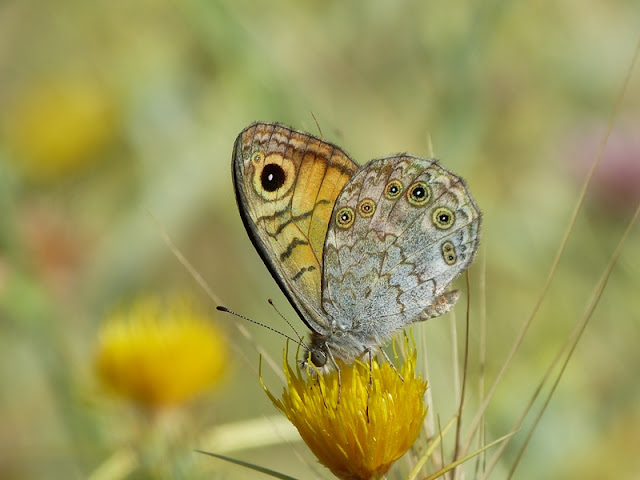 Among them were some Large Wall Browns, Lasiommata maera, which interestingly were smaller than the Wall Browns here. 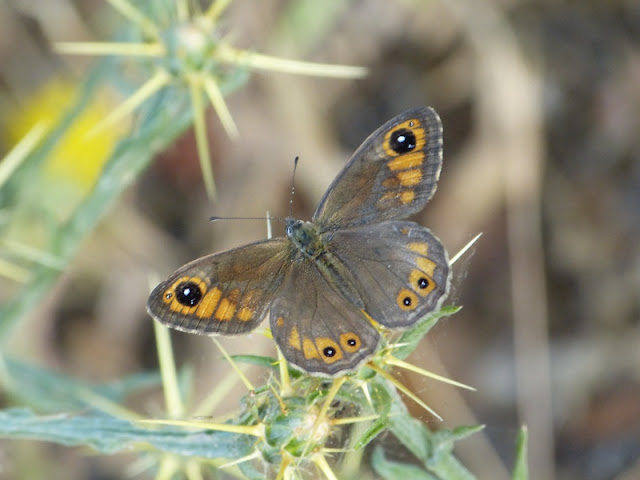 The Wall Browns were out-numbered by Balkan Marbled Whites, Melanargia larissa, but here they seemed lighter in colour than those I had seen on the other side of Mount Pantokrator. 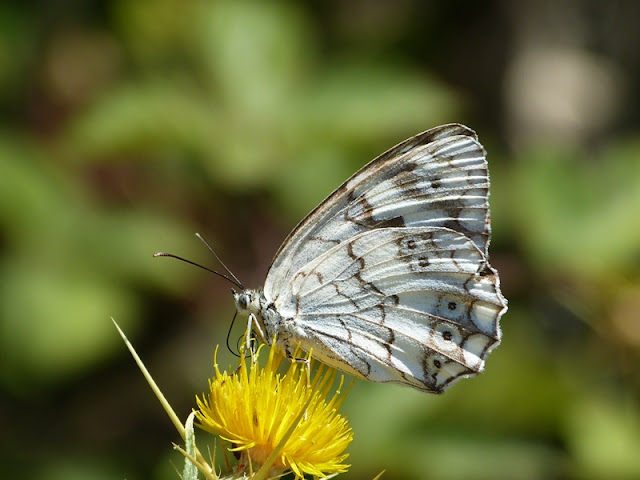 I was really thrilled to see a couple of Spotted Fritillaries, Melitaea didyma, on a sunny spot on the track. I spent some time watching them and they kindly stayed still for photographs feeding on yellow thistles. 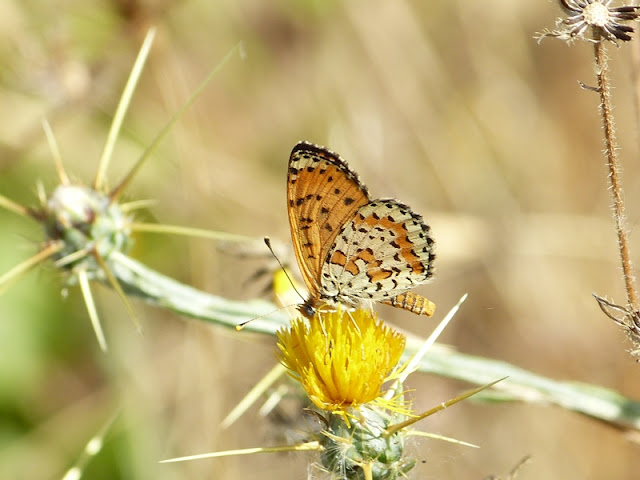 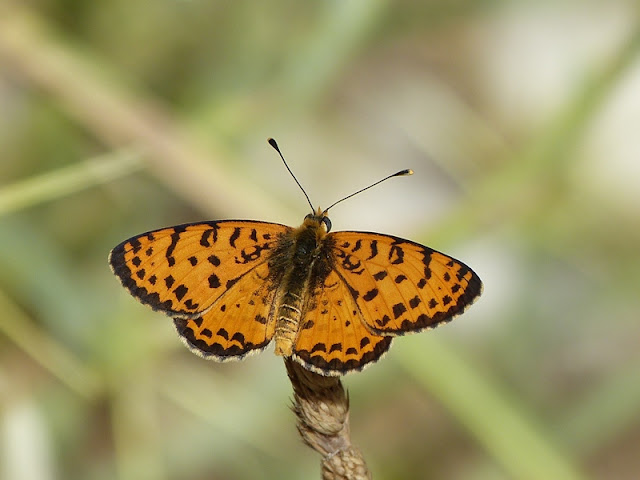 A little further up the track I saw a Wood White, Leptidea sinapis. Unfortunately, it wouldn't come out into the sun, so it was impossible to get a picture of it without a shadow over the wings. 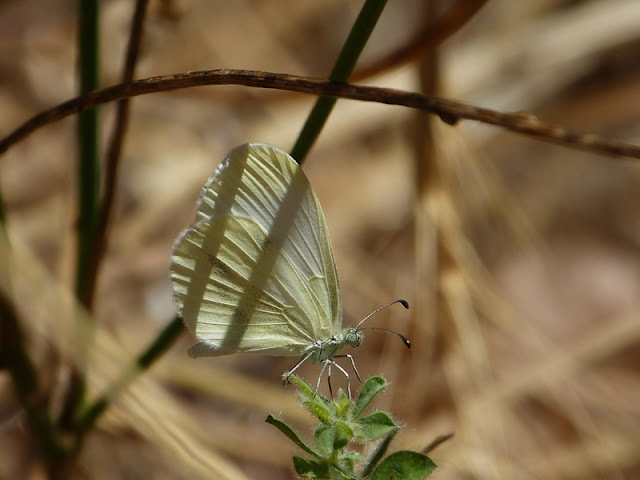 While I was watching them I photographed a little skipper, which I later identified as a Lulworth Skipper, Thymelicus acteon. There were also several more Sage Skippers higher up the track. 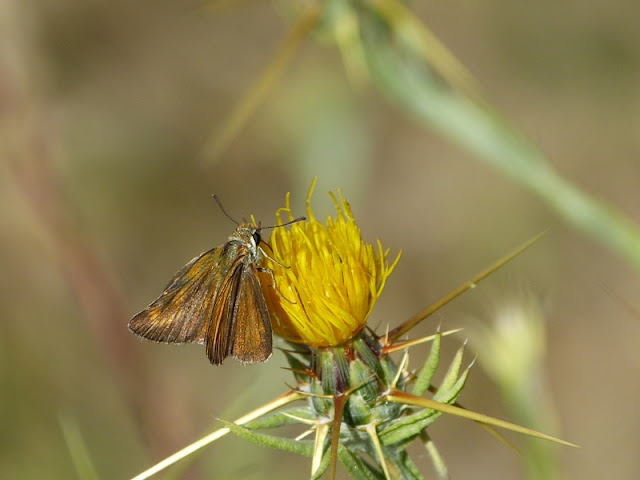 I walked as far as a saddle in the hill where I could see down to the coast on both sides of the island. 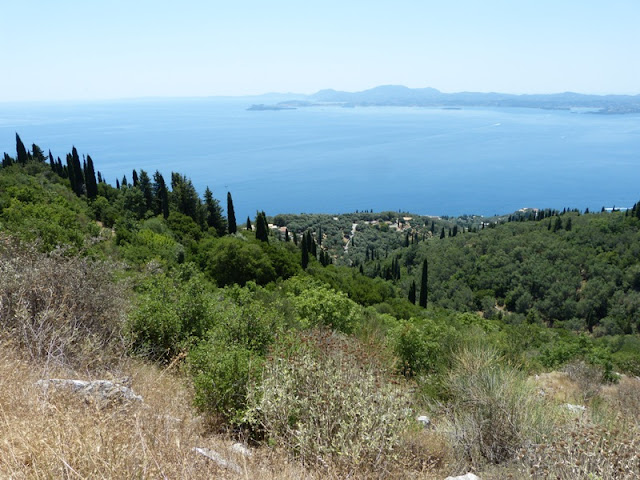 It was lovely being in amongst so many butterflies. The Wall Browns and Balkan Marbled Whites continued to be the most common, but there were plenty of other butterflies including Large Whites, Pieris brassicae, Brimstones, Gonepteryx rhamni, Scarce Swallowtails, Iphiclides podalirius, and Small Heaths, Coenonympha pamphilus. 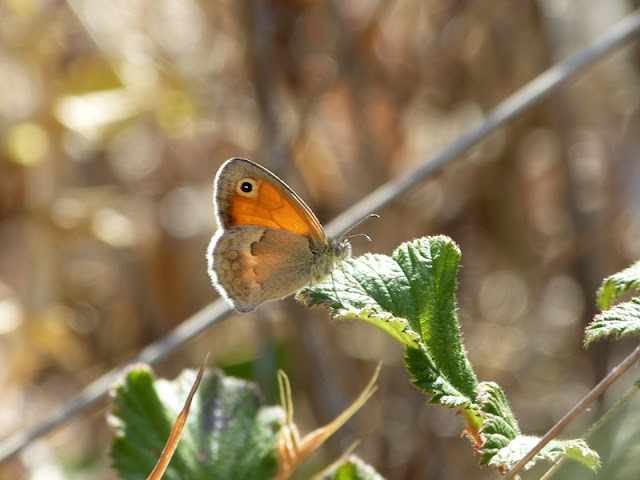 A few days later I walked up there again, but towards the top of the hill I took a different track. This lead me into a wooded area, which was full of Eastern Rock Graylings, Hipparchia syriaca, and various other species, sheltering from the hot sunshine. I spotted a pair of Speckled Woods, Pararge aegeria, on a tree trunk and on the undersides of leaves there were Meadow Browns, Silver Washed Fritillaries and Purple Hairstreaks, Quercusia quercus. 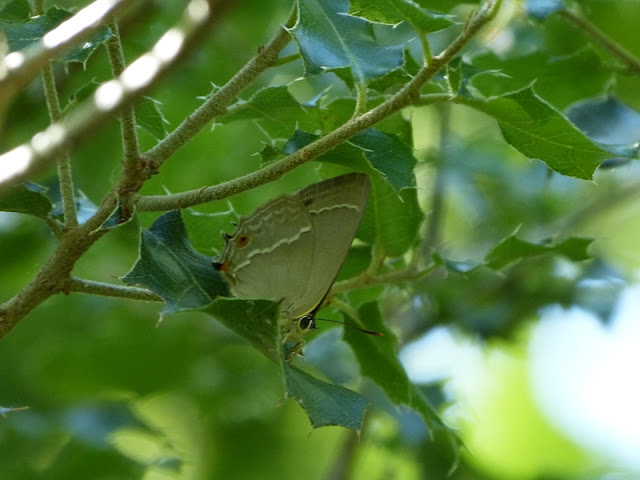 Again, the most numerous butterflies were the Balkan Marbled Whites and Wall Browns. There were a lot more Spotted Fritillaries on this track, including this one with unusual markings. 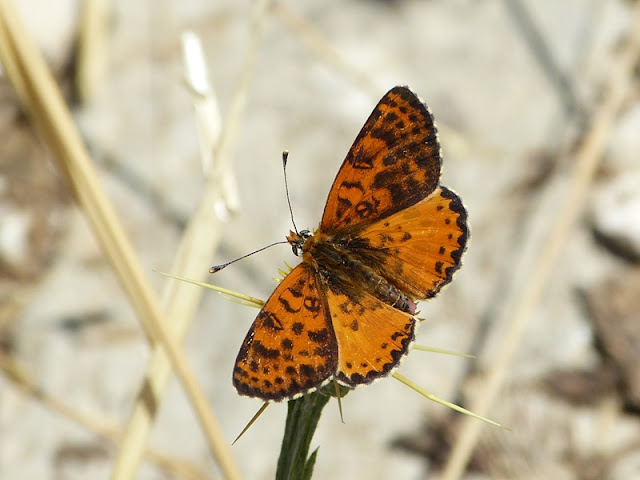 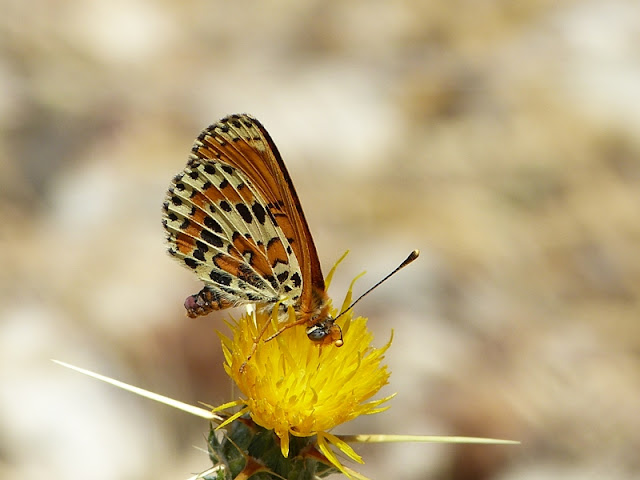 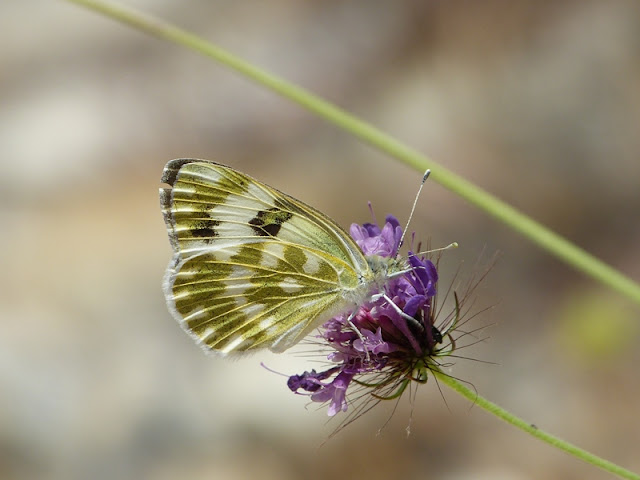 Further down the track I saw some Southern White Admirals, Limenitis reducta. They were all quite active, flying from tree to tree, so didn't offer many chances to photograph them. 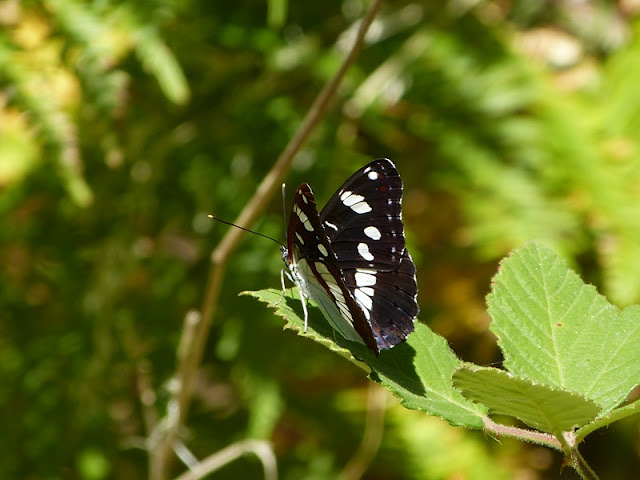 However, there were so many other butterflies flying around. Corfu has to be one of the best places I have been for butterflies.

I saw a total of 38 species, with 11 of them being species I hadn't seen before. It was very apparent that there were very few butterflies in the olive groves, but they were very abundant elsewhere. 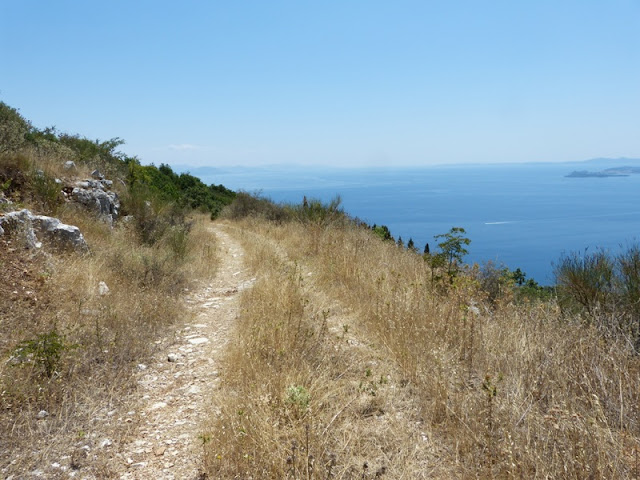 Initially, I found it very difficult to find out anything about which butterflies occur on Corfu, but then I found the Corfu Butterflies and Moths Facebook page. This lists 86 species for the island, but some of those species have only been recorded once or twice.

There is also a book, Butterflies of Corfu, which I managed to obtain a copy of. I think that it is not generally available outside Greece. This book lists 69 species, which I think is closer to the number of butterflies that regularly are seen on Corfu. 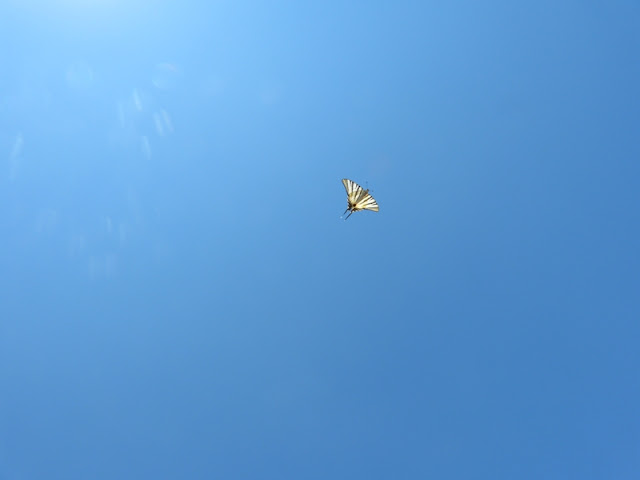 So, yet another place I would love to go back to. The island itself is lovely, the people are just so friendly and of course there are plenty of butterflies!
Posted by Nick Morgan at 11:20 14 comments: